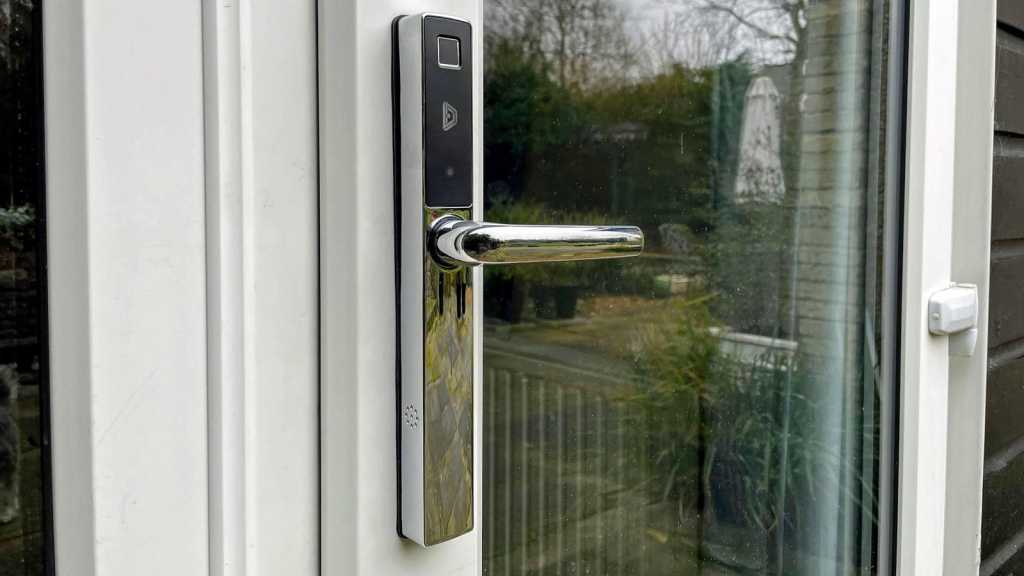 If you want to put a smart lock on a door with a multipoint lock, the Blusafe Origin Smart is a great  choice.

Smart locks are slowly gaining popularity as people begin to trust their home’s security with technology. But if you want to put a smart lock on a composite or UPVC door with a multipoint locking mechanism, there isn’t exactly a huge amount of choice.

Blusafe’s Origin Smart is the first external smart door lock from the British firm and allows you to use your fingerprint, NFC key card or the companion app to unlock your door instead of a traditional key.

The lock is available in chrome, satin chrome and black finishes and fits doors between 44 and 86mm thick.

Blusafe says it’s compatible with 95 percent of multipoint doors, and you can find out on its website whether the Origin Smart will work with your door or not. You can even send a photo of your door, and Blusafe will confirm if it’s compatible.

It’s around one third smaller than some competitors, partly because there’s no keypad. Of course, that’s a bit of a deal-breaker if you need a smart lock for an Airbnb property, but Blusafe is working on an optional, separate keypad which it plans to make available at some point in the future.

The Origin Smart is primarily aimed at homeowners for their own use, along with their family and friends.

Designed to replace your existing door levers, installing the Origin Smart Smart takes as little as 30 minutes and requires only a screwdriver.

In reality, if you’ve never replaced door handles and a Euro cylinder before, it can be a good idea to pay £99 extra and get professional installation. That’s what Blusafe recommends in order to avoid any problems with operation.

But if you’re a competent DIYer and your door isn’t falling off its hinges (which can cause issues with the locking mechanism) then it’s certainly possible to save that cash and fit it yourself.

If you go down that route, the process will probably take 60 to 90 minutes, and you’ll want to enlist someone else to help when it comes time to attaching the outer handle.

In the box are a lot of screws and components, but that’s because a variety of different sizes need to be included to fit doors of different thicknesses.

Once you’ve measured and identified which you actually need, there are only six components and less than a dozen screws that need to be fitted.

The well-written installation guide clearly walks you through the process and includes useful warnings and tips for pitfalls to avoid, such as putting something in the way to prevent the door closing before you’ve finished and tested the installation.

There are two things which may cause you problems. The first is if the existing lower screw hole in your door isn’t large enough to accommodate the screw and the connecting wire which joins the outer to the inner handle. In that case, you’d need a drill or small file to enlarge it.

The other is that you’ll need to use a few self-tapping screws to secure the backplate of the inner handle to the door, especially if your current handle uses only two securing screws. That’s because the Origin Smart’s body extends significantly above the door handle. This could mean making one or more holes that won’t be covered if you ever removed the Origin Smart and re-installed your original handles.

It’s a minor thing, though, and not relevant if you have no plans to return to a standard key-operated lock.

Once installed, you can unlock the door from the inside using the manual thumb-turn. It’s pretty much the same thing as using a key, but if your original handle had a thumb-turn anyway, operation remains the same – from inside. Locking, of course, is simply a case of lifting the handle: this triggers the motor, so there’s no need to use the thumb-turn.

The big difference, of course, is unlocking the door from the outside. No longer can you use your old key: you have three options. First, there’s the fingerprint scanner, second is the key card and third is the Bluesafe Smart app.

You’ll use the scanner for the majority of the time, as it’s the most convenient: just press your finger and the door unlocks.

If you use the fob, you first have to press on the LED to ‘wake’ the lock, then hold the fob to the Blusafe logo to unlock the door.

The Blusafe Smart app is, of course, the least convenient method. You have to launch it on your phone, tap on the lock in the list (in case you have more than one), wait for the Bluetooth connection to be established and then tap and hold until it’s unlocked.

But the app is a good option for anyone who needs only one-off or occasional access. You can share a so-called ‘e-key’ within the app with anyone, but they’ll need to download the Blusafe Smart app and sign up with their email address and a password in order to use it.

You can give someone a one-off e-key which grants them access once only, or you can send them a ‘time-range’ e-key. That’s exactly what it sounds like, and you set the dates and specific times between which that e-key will work. Once the end time has passed, that e-key will no longer grant access.

You can register a total of 50 fingerprints plus extra key fobs. This can be done with or without the app, but it’s easiest if you do use it. The wording is slightly confusing at first as it’s unclear if you should follow the instructions to place your finger on the sensor before or after tapping the Add button.

Blusafe has made a useful installation video that takes you through the entire setup process, including registering fingerprints, and it’s well worth following this even if you’re not installing the hardware yourself.

Overall, the app is pretty good but navigation could be simpler. There are various menus in different sections containing settings which could be placed together, and it isn’t particularly obvious what some options such as “Sound” do. It would be nice to see a similar gesture-based unlock method that didn’t require you to open the app, too.

The main user is the ‘Homeowner’ and has the most rights. Homeowners can create profiles for each person who will have access to the lock, and for each you can make them an ‘administrator’ or a ‘common member’.

Administrators can create or delete common members and common members can simply use the lock and add, modify or delete their fingerprint or key card. That’s the type of profile you’ll want to use for your kids or anyone who needs temporary access to your home such as a cleaner or tradesperson.

Each person should register at least three fingerprints to ensure access even if one or two fingers become unusable (because of cuts, burns or something else). It’s slightly annoying that a separate Blusafe account is needed for each person: you can’t just create profiles in the app while logged in as the Homeowner.

However, you could instead register them as more of your own fingerprints, and instead of naming them ‘Left Thumb’, you can call it “Sally thumb” or “Tony index finger”.

The Origin Smart is powered by four AA batteries (which are included) and these should last around eight months, but the time will vary depending upon how often the lock is used.

Thanks to a built-in speaker, you’ll hear audible warnings telling you the batteries are low well before they run out completely. And if you ignore those warnings and they go completely flat, you can touch a 9V battery to the terminals underneath the outside handle to provide temporary power to get in – just as you can on Yale’s Conexis L1 lock.

The speaker, which is on the external handle, announces when the door is locked and unlocked and you can adjust its volume in the app. It isn’t yet possible to schedule volume levels by time, but it would be nice to see that as a future app update so it can be loud during the day and quiet at night.

Talking of the future, Blusafe is planning to add Alexa and Google Assistant integration which would allow you to unlock the door with your voice. It could also be useful for setting up routines so that, for example, indoor lights turn on and music starts playing when you unlock the front door.

If you buy the Origin Smart Wi-Fi bundle, you’ll get a separate gateway which communicates with the lock via Bluetooth and connects to your home Wi-Fi network.

That allows you to unlock the door remotely and let someone in. But because of the way multipoint security works, requiring the handle to be lifted to lock the door, it’s not possible to lock remotely: someone must lift the handle locally to achieve that.

The app will tell you the current status of the door – whether it’s locked or unlocked – and show a log of who unlocked it and when. If you don’t go for the Wi-Fi version, then you’ll only be able to see an up-to-date version of this log when you’re in Bluetooth range of the Origin Smart.

It’s possible to assign ‘special fingerprints’ and opt to get notifications when these are used. That can be useful so you know when your kids have returned home, for example, but again, this will only work remotely if you have the Wi-Fi gateway.

If you go with Blusafe’s recommendation and opt for professional installation, this adds £99 to the price, bringing the total (with Wi-Fi bridge) to £398.

It’s only available in the UK, direct from Blusafe.

This could well be more than you’d want to spend on your first smart lock, which is why the self-installation route will be more tempting for many.

You may be tempted, too, to look at the Yale Conexis L1 which costs £179.99 from Amazon, but this doesn’t include remote access. Adding the Wi-Fi bridge and access module costs £99.99, and professional installation is £109.99. That’s a total of £389 –and the saving isn’t worth it considering the L1 lacks a fingerprint scanner.

The Origin Smart, like the L1, has a two-year warranty for the electronics, but Blusafe offers an additional three-year warranty on the handle and other non-electronic components.

If you don’t care about that, remote access, the fingerprint scanner and can install the lock yourself, the L1 is almost £100 cheaper than the Origin Smart.

Blusafe’s Origin Smart is a good choice for UK doors with multipoint locks. The fact you can unlock it with a fingerprint is a real benefit since you can never forget to take your fingers with you when you leave the house, so it isn’t possible to lock yourself out.

It may be more expensive than Yale’s Conexis, but the price difference disappears if you want remote access and can’t install it yourself. Plus, Blusafe’s app allows you to create users with different levels of access and doesn’t charge for e-keys.

Currently, you can’t buy a separate keypad, but this should an option before too long, as will Alexa and Google Assistant integration.