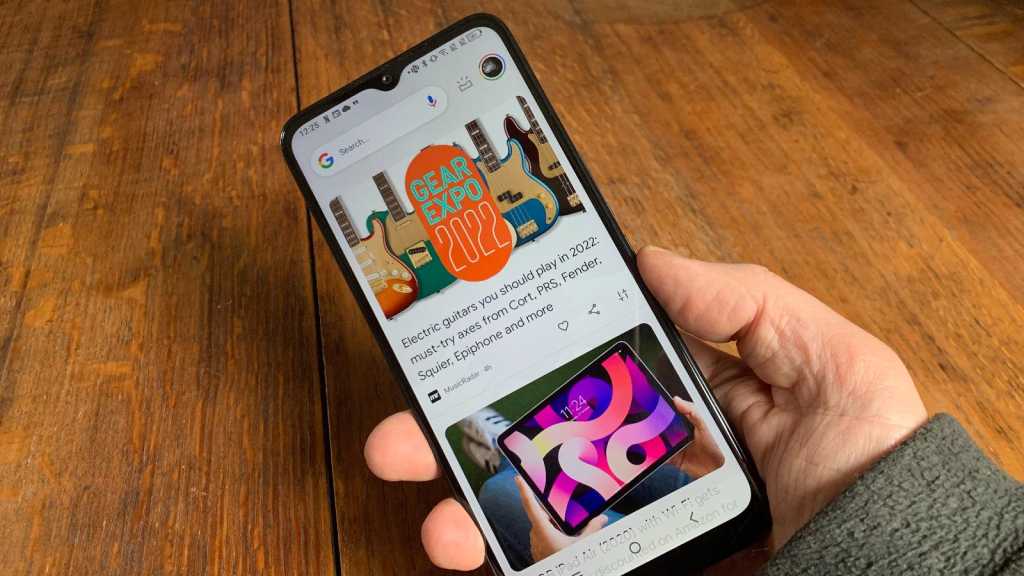 Strong battery life, decent performance, 5G and a nice display certainly make the inexpensive TCL 20R 5G a strong contender in the budget market but it has drawbacks to consider.

The budget smartphone market is getting more competitive all the time, and it’s surprising what you can get for not a lot of money these days. A contender for your cash is Chinese company TCL, whose new model brings 5G technology to a device that’s comfortably under £200.

For a device with a low price point, the TCL 20R 5G cuts a pretty refined aesthetic. The tall, slim design is obviously dominated by the 6.52in display, which features slim bezels and a ‘V-Notch’ area for the selfie camera (basically a small part of the bezel that curves down into the screen rather than a punch-hole opening).

A metal band wraps around the chassis, providing a home for the volume controls, power button, SIM tray, USB-C charging port, twin speaker grills (although the phone only has a single speaker) and the 3.5mm headphone jack.

On the rear side, there’s a raised camera section that holds three lenses and the LED flash. The only real clue that this is a sub-£200 device is the thin, plastic back, but that’s a reasonable concession and just means that TCL has spent the money elsewhere, which seems the right approach.

A fingerprint sensor is situated in the upper third of the rear panel, and while it works well enough, the lack of a raised section around it does make the sensor hard to find at times. Muscle memory will kick in after a little use though, so it shouldn’t be a problem.

With dimensions of 164.3 x 75 x 9mm, it’s a reasonably slim phone that’s easy to grip in your hand, and the 186g weight while not being feather-light is certainly manageable for extended periods of use.

TCL doesn’t list any IP ratings on the device packaging or its webpage, so assume that getting the 20R 5G wet will not end well. One thing we do know is that you can choose between Lazurite Blue or Granite Grey liveries, both of which look pretty smart.

One omission that’s a little disappointing is that there isn’t a silicon case in the box. As this is hardly likely to be a huge selling device (not because of quality, but more due to competition and brand-recognition), you’ll struggle to find third party cases that will fit.

I did take a quick look on Amazon and came across a small selection, but most Chinese budget phones come with a basic case, so it seems a silly thing to leave out.

Power is handled by the 4,500mAh battery, which supports fast charging but not wireless.

The 6.52in display is an LCD IPS panel rather than the AMOLED ones you’ll find on more expensive models. This is perfectly acceptable at this price point, and remember that the cheaper iPhones still use LCD, so it’s not like you’re getting a raw deal.

In use, the display is bright (maxes out at 500 nits), colourful, and renders images and text well. In fact, at no point during my time with TCL 20R 5G did I wish it had an AMOLED panel, as this one works just fine.

TCL employs something called ‘NXTVISION’ on its phones, which is optimisation software for the display panel. There are various settings for colour and temperature (warmer whites rather than hotter screens), plus a few other options. The defaults all looked good, and it’s cool to have the ability to ‘dial-in’ the display to your preferences.

Scrolling through pages is smooth, thanks to the 90Hz refresh rate (which varies from 30Hz to 90Hz depending on which you’re doing) with only the occasional notable shudder here or there. I

t also benefits from a 180Hz touch sampling rate, which is good news for gamers. The 1600 x 720 resolution might not be Full HD, instead, it uses the HD+ badge which denotes 720p and tall, but again I didn’t find that this held things back.

In all honesty, this is probably one of the nicest displays I’ve seen on a phone at this price point. It’s a fair size too, with the 6.52in stretching to nearly all four corners, giving a screen-to-body ratio of 90%, so you won’t find any chunky bezels around here.

At the bottom edge of the device you’ll find twin speaker grills but, like many other inexpensive phones, the TCL 20R 5G only comes with a single speaker onboard. This is probably the most obvious clue of what the device costs, as the audio quality is poor.

Thin and tinny frequencies are pushed to the fore, with hardly any bass to beef things up. Thankfully there is a 3.5mm headphone jack, so you can always connect to an external speaker or headphones to make up for the sorry state of the internal offering.

TCL has gone for a MediaTek Dimensity 700 5G processor in the 20R 5G, which is similar to a Qualcomm Snapdragon 732G and performs well in the budget to lower-mid range tiers.

This is joined by a rather small 4GB of RAM and 64GB of onboard storage, although the latter can be expanded by up to a massive 1TB through the microSD slot that sits in the same tray as the Nano-SIM card.

For general day-to-day tasks the phone is pretty zippy, opening and closing apps at a decent clip, albeit not lightning fast. I didn’t encounter any unusual crashing out of apps while using the TCL 20R 5G, and even moderate gaming was achieved without drama.

It’s a steady, decent unit that will serve you well, so long as you don’t expect a crazy-fast pocket rocket.

In our standard barrage of benchmark tests, the TCL 20R 5G managed to total up the following scores:

As you’ve probably already guessed from its name, the TCL 20R 5G supports 5G LTE, which is something of a bonus at this price. We have seen other budget phones with this feature, such as the Xiaomi Poco F3, OnePlus Nord CE 5G, but they usually tend to cost a bit more than the TCL model.

While 5G might not be top of your list when searching for a cheaper phone (especially with 5G plans often being more expensive than 4G ones), it’s good to have the option available and you can always just use a 4G connection instead.

Bluetooth 5.1 means you won’t have to worry about losing connections to wireless earbuds or Bluetooth speakers, and Wi-Fi 5 will keep you happily on the web at decent speeds. It’s a respectable selection of connectivity options, with 5G being the icing on the cake.

While the camera array looks stacked with options, it’s a little deceiving as there’s only one main shooter, with the two others for depth and macro duties. Again, not uncommon.

Sadly, the 13Mp camera isn’t the best. Colours tend to be overly vivid and focus a tad soft. There’s also the fact that shots are over-exposed, resulting in images that are too pale but also too saturated.

Photos aren’t terrible, but I’d warn against relying on this device to capture those all-important moments, as you’d probably be disappointed with the results. You can get better at similar prices without looking too far.

Here are a few examples of pictures I took with the TCL 20R 5G:

Video is a similar story, with the lack of  OIS (Optical Image Stabilisation) making footage a bit jerky unless your hands are stock-still. Again, it suffers from over-exposure and saturation issues which make videos less than ideal. But, in a pinch, you can document your adventures with the TCL.

On the front, you’ll find an 8Mp camera that offers the same kind of performance as the main shooter. It’s fine for quick selfies to post on social media, alongside video calls as long as there is lots of light in the room.

The 4500mAh battery in the TCL 20R 5G proved quite durable during my tests, with the phone usually finishing a day with 20-30% left in the tank. In fact, in our PCMark battery test, it scored a whopping 16 hours, putting it ahead of its closest rivals.

TCL states that the device supports up to 15W Fast Charging, which isn’t quite in the league of some of the newer Chinese phones, but again those usually come with higher ticket prices. The same is true with wireless charging, which doesn’t feature on the device.

Android 11 comes as standard on the device, overlaid with the TCL UI 3.0 skin. It’s fair from the most cumbersome skin I’ve seen, with much of Android being left alone.

You can decide whether to use the newer gesture controls for navigation or if you prefer things old school, then the navigation buttons are on hand.

You will find several TCL apps for media and other functions, but these are easily uninstalled or moved to a folder where you can forget about them.

TCL also promises that the 20R 5G will receive security updates until August 2023, so you know that your device will remain safe until then. I still think this should be ongoing, but the whole Android eco-system seems intent on prematurely retiring perfectly decent phones, which is a wider problem than TCL can solve.

You can order the TCL 20R 5G from Amazon UK for £179 ($239.99) as well as Very and Laptops Direct. It’s also available either on contract or outright from EE and Asda mobile.

At the time of writing TCL isn’t selling the 20R 5G in the USA, but I did find some other phones from the range on Amazon US, so it could appear in the future.

If you don’t need 5G then the Moto G31 and Xiaomi Redmi 10 are both solid options. Find more options in our best budget phone chart.

It wasn’t that long ago that looking for a device at this price point would have turned up some pretty grim fare. That’s not quite the case these days, as shown by the TCL 20R 5G.

Ok, the cameras are not the best and the speaker is frankly awful, but if you’re after a stable, fairly quick everyday smartphone, then it can fit the bill – especially if you’re looking for 5G support on a budget.

The display is bright, colourful and clear, while the performance is certainly good enough for general duties. Add to that some impressive battery life and storage that can be massively expanded from the restrictive 64GB, and it’s a decent option when looking for a cheap phone.