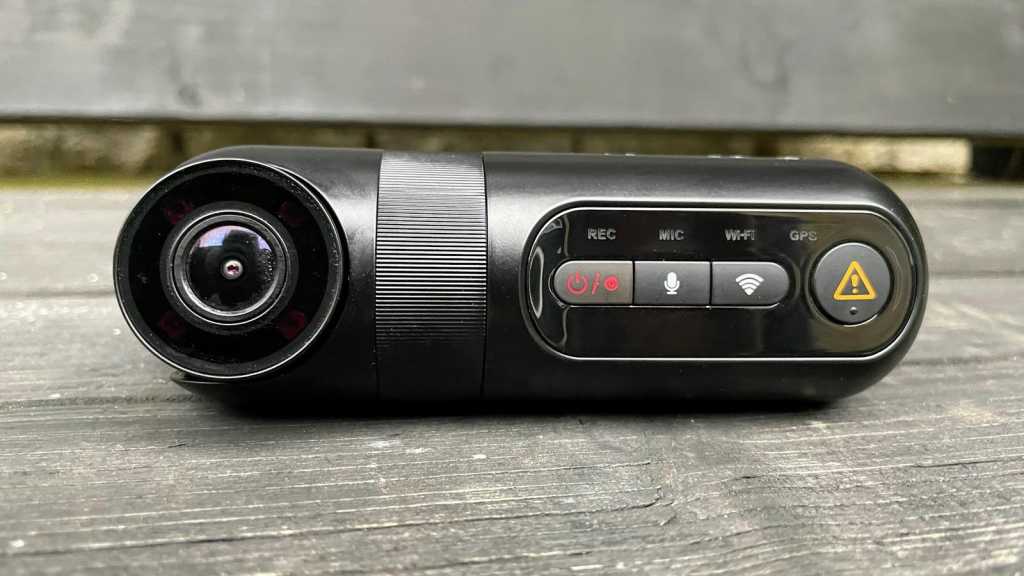 The compact design, great parking mode and decent video quality makes the T130 a great option for anyone looking for more than a single-lens dash cam.

I’ve been impressed by Viofo’s dash cams over the years, as they offer the features you want at a sensible price.

The T130 is more expensive than some of the firm’s dual-channel models but that’s because it has three channels. That means it record front, rear and the car’s interior.

It’s primarily aimed at taxi and Uber drivers, but the all-round coverage is useful for any driver and offers the best video evidence which can help to prove you weren’t at fault in an incident.

All three cameras can also record while your car is parked. Again, this should capture anything that happens and – hopefully – who is responsible.

The front camera records at 2K (1440p) resolution, with the interior and rear cameras recording at 1080p. If you’re disappointed there’s no 4K recording, then understand that this would push the price up considerably higher, use up a lot more storage space and potentially lead to worse quality at night.

As is stands, the T130 is a sensible balance of features, quality and price.

Unlike the A119 and A129 which I’ve reviewed previously, the T130 doesn’t have a screen. This means it’s even smaller and the cylindrical design should fit unobtrusively behind your rear-view mirror, or certainly well out of the way.

And unlike Viofo’s A139, its previous triple-channel dashcam, the interior camera is built into the body of the front camera, so there are only two units to install, and one less cable.

Being built-in means you’re quite limited in where you can place the main unit. The interior camera can swivel horizontally to point at the driver’s door, which is useful if you want to record any conversations such as if you get pulled over by the police.

In a right-hand drive car, the only way to make this work is to mount the unit upside down so the interior camera is pointing in the right direction. The button labels are then upside-down, but you can flip the image in the app so the recordings are the right way up.

The only issue I found during installation in a 2007 Ford Focus was that, even with the separate vertical tilt on the front-facing camera, there was only just enough adjustment to angle it as low as I wanted it. In cars with even more raked screens, the lens might point too high to capture the road immediately in front.

The USB cable running between front and back cameras is quite thick, which can make it hard to push behind trim, and to ‘lose’ the extra length of cable if you find it’s too long.

Also note that the T130 uses all USB-C connections, so any hardwire kit you may have will have to be replaced.. or you’ll need an adapter to use an existing non-USB-C power supply.

And unless your hardwire kit already has power and accessory connections, you’ll need to use Viofo’s HK4 anyway. It’s not included in the box: it’ll cost you an extra £15/$15 from Amazon.

Without it, you won’t be able to use the T130’s parking mode as it needs power when the ignition is off.

With no screen, this dash cam relies on voice announcements to tell you when it’s recording (or not) and for other functions. It uses the same Viofo app as the A119 and A129, and you’ll need to long-press the Wi-Fi button to turn on Wi-Fi before the app can connect to the camera.

The app is the only way to change settings – of which there are many – but you won’t necessarily need to use it all that much. It’s also used for reviewing and downloading recorded clips, but the playback section is quite clunky.

With three clips being recorded simultaneously and the default length of one minute, you’ll end up scrolling through a lot of thumbnails to find what you want. There are three sections: all, locked and parking, so at least you can filter them down a bit.

There’s a microSD USB adapter in the box, so you might find it easier to remove the card from the camera and look at the files on a PC instead. Budget for a 128GB microSD card – or even 256GB – as recording three cameras eats storage space like there’s no tomorrow.

GPS is built in, so location and speed data is recorded along with the videos:  you can select in the app whether speed and coordinates are stamped onto the video or not. You can even turn off the Viofo logo, which is a nice touch.

The app offers lots of control over the parking mode. You can choose to record continuous video at a low bitrate, timelapse video (at various frame rates) or opt to only record when ‘events’ are detected.

The good news is that if you go for, say, 2fps timelapse the T130 will start recording full-framerate video if an event is detected. This offers the best of both worlds: power-saving and still seeing everything that happened while your car was parked.

Talking of power, the hardwire kit has a slider so you can select which voltage to allow your vehicle’s battery to drop to before cutting power to the dash cam.

You can also set a parking timer, which specifies how long the parking mode operates for before turning off, but the hardwire kit will – obviously – override that setting and cut power if the battery reaches the cut-off voltage before the timer runs out.

In daylight, the main front camera records great-quality video that’s detailed enough so you don’t regret paying more for a 4K dash cam. The 140° field of view is ideal, colours are good and – when you enable WDR (wide dynamic range) in the app – there’s enough detail in darker areas. The sky can still blow out to white, but the important stuff going on at road level is well exposed.

The rear camera quality – which has a 165° lens – is pretty good too, offering good detail, colour and dynamic range. However, in anything but great light the image becomes very grainy and offers little detail at night.

The interior camera doesn’t have such great colours, with a strange purple hue, but as the footage is only important for evidence, that’s not a deal-breaker. And the image it produces in daylight is nice and sharp.

Four IR LEDs provide light for night vision but detail isn’t as good as during the daytime.

They don’t have the infrared, but the same comment applies to the front and rear cameras as well. As with all dash cams, you simply won’t get the same level of detail at night, with registration plates being often unreadable and not much to see in shadow areas.

Here’s a screenshot from the rear camera:

The T130 is available direct from Viofo’s website for US$239.99, but it’s also available from Amazon.com. At the time of writing it was out of stock, and Viofo confirmed that a lack of stock was also the reason it’s not available yet from Amazon.co.uk. But the company said that it will be available more widely soon.

The T130 is the first triple-lens dash cam we’ve reviewed, but for alternative recommendations with two or one lens, read our roundup of the best dash cams.

At a similar price to a lot of dual-channel dash cams, the T130 is good value. It delivers good video quality that – as long as it’s not night time – can usually be relied upon to show clearly what happened in an incident. Resolution is enough in most cases to read registration plates.

The app could do with some interface improvements, but generally works reliably. And if you are tempted by the T130, remember to budget for the hardwire kit and a microSD card on top the price of the dash cam itself.