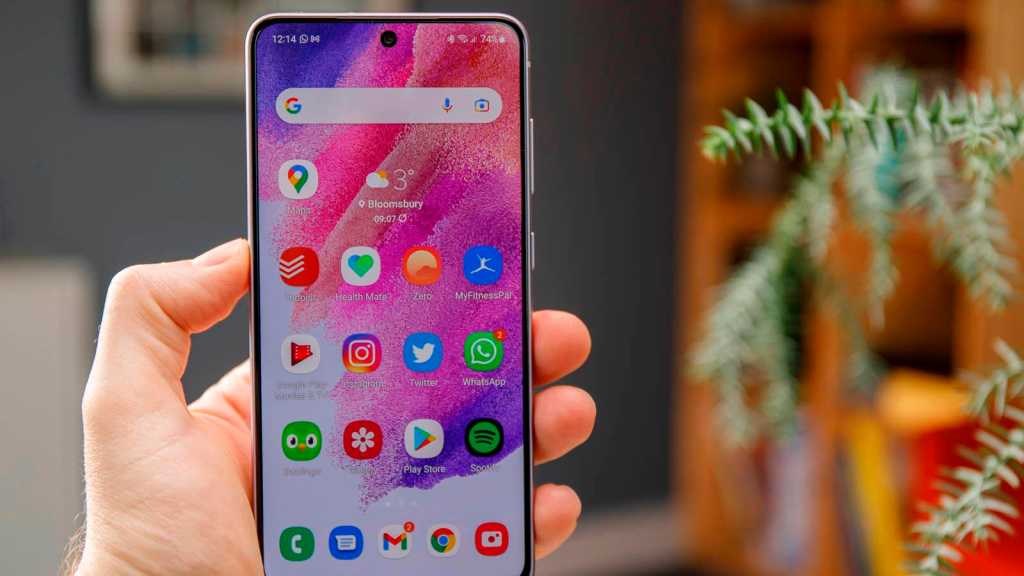 The S21 FE is a phone out of time. It’s a pretty great, well-rounded hardware package and I doubt many people would come away disappointed, but it’s launched six months too late. If it cost less I might be here singing the phone’s praises – but at this price, it’s a phone I can’t wholeheartedly recommend.

Phone delays are nothing unusual, but few phones have been as delayed as the Samsung Galaxy S21 FE. First tipped by leakers to launch as early as August 2021, the phone instead didn’t launch until January 2022, when Samsung unveiled the new handset at CES in Las Vegas – over 11 months after the other S21 phones arrived.

That delay hasn’t had a direct impact on the phone itself, but does change where it sits in the market. The tech here is a few months older than it should be, the rivals it would have had last summer have since had price cuts (as has the regular S21, lest we forget), and it arrives right as we’re about to see the launch of the Galaxy S22 series – due in February.

So while there’s nothing wrong with the Galaxy S21 FE per se – it’s a pretty great phone, really – it’s trickier to recommend right now, as at full price there are better buys elsewhere.

It only takes one glance at the S21 FE to see what it shares in common with the rest of the S21 line.

From the front it looks almost identical to the other S21 phones, with a slim bezel and central punch-hole selfie camera, while on the rear you’ll spot the trademark ‘contour cut’ camera in the corner.

The main difference is in colour and finish. Like the S20 FE before it, Samsung has opted for more colourful hues for this phone. There’s black (well, ‘graphite’) and white, but also an olive green and a pastel purple.

This time around the camera is wrapped in the same colour as the rest of the phone too, rather than a contrasting reflective finish – a nod to the design we’re expecting to see in next month’s S22. I’ve got to say, I actually think this leaves the S21 FE looking better than its more expensive sibling.

In terms of size this phone sits in a sweet spot between the S21 and S21+, and is only a little heavier than the regular model at 177g. It’s got basically the same build quality too – Gorilla Glass Victus over the screen, an aluminium frame, and plastic back, with an IP68 rating to protect from water and dust.

The 6.4in display used here is just a little larger than the 6.2in screen on the regular S21, but not so much as to make this feel like a big phone – it’s still comfortable to hold, helped by the curved body and lightweight material.

With a 120Hz refresh rate, Full HD+ resolution, and an AMOLED panel, this is essentially just as good a display as you’ll find in the other phones in the series – which is to say, it’s about as good as you could hope to get at this price.

You’ll also get a fingerprint sensor built into the display, which has worked well for me so far, along with the option to use the selfie camera for face unlock.

Samsung has also still packed stereo speakers into the phone, so you’re getting decent audio – though naturally there’s no headphone jack.

In most parts of the world the S21 FE is powered by Qualcomm’s Snapdragon 888 chipset, which is paired with either 6 or 8GB RAM, and 128 or 256GB storage. Some markets – including Australia – instead get Samsung’s own Exynos 2100, but the majority get the 888, which is what I’ve been testing.

That’s a powerful chip, and if the phone had launched last summer that’s all there would have been to say about it. Unfortunately, since then Qualcomm has launched the 888’s successor – the Snapdragon 8 Gen 1 – and we’re already seeing the first phones launch with that chip.

Again, it doesn’t make the S21 FE a worse phone, but does raise the spectre that most buyers would be better off waiting another month or two to buy a new phone with the next-gen chip.

In any case, benchmarks reveal predictably impressive performance from the 888, though not up there with the fastest phones using that chip. I’ve noticed the phone getting hot during benchmarks and other demanding applications, which is no doubt holding it back a little, so it looks like Samsung’s heat management leaves a little to be desired.

I’ve actually been testing the model with just 6GB RAM, so anyone buying an 8GB model should expect slightly better results, though that’s unlikely to help with the overheating.

The Snapdragon 888 provides 5G support too, of course, and you’ll also get Wi-Fi 6 and Bluetooth 5.0 to round out the wireless connectivity.

The camera is perhaps the chief area where the S21 FE is, on paper, a slight downgrade from the regular Galaxy S21 – though the gap is small, and in some specific respects the FE may even have the edge.

The main camera is in fact the same as the S21’s main shooter: a 12Mp, f/1.8 sensor with Dual Pixel auto-focus and optical image stabilisation (OIS).

It’s pretty excellent, truth be told. Samsung doesn’t quite make the best cameras around right now, but it’s not far off, and this is a good example of why. Shots are routinely crisp and vivid, with vibrant colours and excellent dynamic range.

Thanks to the OIS it holds its own in the dark too. Light sources still tend to get a little  blown out, and there’s a softness to some of my night mode photos that suggests more stabilisation is needed, but few phones at this price would do much better.

It’s joined by a 12Mp ultra-wide and 8Mp telephoto. The former is not quite to the same standard as the S21’s thanks to a smaller sensor, which especially holds it back at night. In good lighting though, this is still better than the average ultra-wide.

The telephoto offers 3x zoom, and thanks to OIS shots stay crisp and clear, even in the dark. This lens is trickier to compare to the S21’s, as that phone actually uses a regular 64Mp camera instead of a true telephoto, and crops in digitally – to surprisingly good effect. Those who follow the specs may appreciate that the FE features a ‘true’ telephoto camera, but in practice the results are pretty similar.

On the front you’ll find a 32Mp selfie camera. This is actually higher resolution than the S21’s equivalent, but that doesn’t always prove much. It’s also a larger sensor, but the extra resolution means it works out to smaller pixels.

All of which is a long-winded, spec-heavy way of saying that this is different to the selfie camera on the S21, but not drastically better or worse. It’s clearly on a par in good lighting, but at night it falls back, with a loss of detail and slightly soft focus.

Battery and charging are two areas where Samsung phones tend to be fine, but nothing special – certainly not compared to devices coming from the likes of Oppo and Xiaomi.

The same is true here. The 4500mAh battery will last a day of normal use, but not loads more than that. That’s probably good enough for most people, but if you know you’re a heavy user you might want to look at other phones with better battery life.

Charging is a similar story. Samsung doesn’t supply a charger with the S21 FE, so you’ll have to either buy one or use your old phone’s charger. The phone is capable of up to 25W wired charging – testing with a third-party charger, it was enough to return 51% of the phone’s battery life in half an hour. That’s not bad, but with phones out now that can offer a full charge in the same time frame, you can definitely get better elsewhere.

It is good to see wireless charging though. The 15W speed is decent, if you can find a charger that supports it – most Qi chargers are limited to 5W or 15W – but Samsung also includes reverse wireless charging, so that you can use the phone to top up headphones or other accessories.

Samsung is shipping the S21 FE with Android 12 out of the box, running the company’s own OneUI 4.0 skin on top.

Samsung has incorporated some, but not all, of Android 12’s biggest features. Most notably, Google’s Material You tech – which pulls colour tones from wallpaper images and used them to set the colours of the phone’s whole interface – is here, but given a somewhat narrower implementation than on the Pixel 6. You won’t see the custom colours appear in as many places, so the effect is a little more muted.

Importantly, the main Android 12 privacy features are included. There’s a tweaked version of the privacy dashboard – here called ‘permission usage’ – which lets you know which apps have used which of your phones security permissions recently. Alert icons when the microphone and camera are in use also feature here, protecting you from unwelcome apps activating features they shouldn’t be.

The other good news is that Samsung remains one of the Android brands with the best update promise. The S21 FE will get three major Android version updates – so should ultimately get Android 15 – along with four years of security patches. That helps the phone look like a long-term purchase, rather than something that will need replacing in a year or two.

And here’s the rub. The S21 FE is out now and widely available, and it’ll set you back:

If you’re tempted, you can buy it directly from Samsung, or from Amazon or any of the other usual phone and tech retailers.

The big problem for the S21 FE is that it’s base pricing is only £100/$100/€100 cheaper than the original S21, which if nothing else gets you a better camera. That’s based on the S21’s launch price though – by now you can actually find an S21 for cheaper than an S21 FE, and that price will only drop further once the S22 goes on sale.

That makes the S21 FE a tricky phone to recommend. It gets even worse when you look elsewhere, as you could pick up a Google Pixel 6, OnePlus 9, or Xiaomi Mi 11 and spend less. Even the iPhone 13 Mini comes in cheaper than the S21 FE right now.

Check out our pick of the best Android phones for other flagship options, or the best mid-range phones for a few slightly cheaper options that in some cases can still match the S21 FE for performance and features.

The S21 FE is a phone out of time. It’s a pretty great, well-rounded hardware package, that’s really only let down by some minor overheating issues and the fact that Samsung still lags far behind the Android pack on battery and charging tech.

If it cost $100 less than it does I might be here singing the phone’s praises – but, for now at least, it doesn’t. And at this price, it’s a phone I can’t wholeheartedly recommend.

If you love the look, or think the feature set is just right for you, then go for it. This is a good phone and I doubt many people would come away disappointed from it.

But if you want to shop around and get the best bang for your buck then other Android phones will give you more for less. And with the S22 just around the corner, you’d probably only have to spend a little more to get a much better phone from that range.