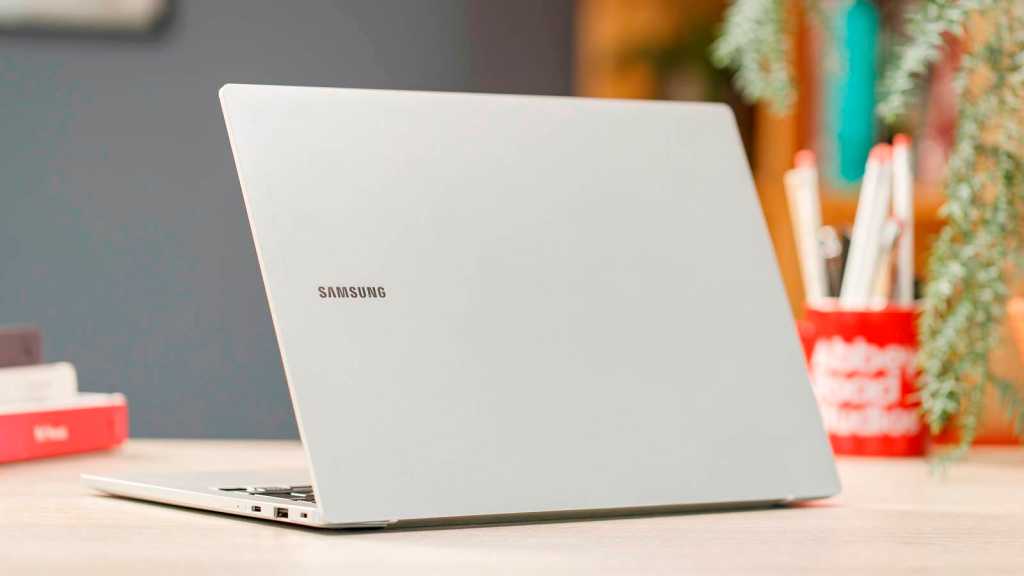 The Samsung Galaxy Book Go has an attractive enough design, plenty of ports, and perks like excellent battery life and 4G connectivity, but its performance problems overshadow them all. All the ports in the world don’t matter when a laptop is this slow and frustrating for basic, everyday tasks, and even at an affordable price this is a bad buy.

The Galaxy Book Go is a lightweight, affordable laptop from Samsung that’s powered by a Qualcomm chip – instead of Intel – and offers the option of 4G connectivity.

On paper that sounds great, but in practice this laptop is abominably slow, with Windows still refusing to play nicely with Qualcomm’s Arm architecture. The result is a laptop that’s difficult to recommend, and undeniably outclassed by most Chromebooks at the same price.

While I have my complaints about the Galaxy Book Go’s performance, I can’t really fault the way it looks.

Only available in silver, this is a pretty sleek and attractive laptop for the price. Samsung has kept it slim (just 14.9mm thick) and relatively light (only 1.38kg), which is impressive bearing in mind that it comes with a fairly expansive 14in display.

It’s partly that light because the body is plastic, which is pretty inevitable at this price. That does make the laptop feel a bit cheap – but hey, it is cheap. So you can’t really complain too much about that.

The 14in display here is large for a laptop of this price, but it comes with drawbacks.

It’s Full HD, at 1920 x 1080, so at least Samsung hasn’t taken any shortcuts there as we’ve sometimes seen in other budget laptops.

Unfortunately, it’s not a great screen in other respects. Using a SpyderX to assess the screen’s performance, I found it capped at a max brightness of only 225 nits – about half of what the best laptop’s manage, though admittedly better than a few other cheap options.

It also offers a limited colour range, managing only 62% of the sRGB gamut. That means it’s not capable of displaying a full range of colours, leaving you with inferior image quality. It’s fine for basic work tasks, but movies and photos simply won’t look their best on this screen – made worse by limited viewing angles that mean the display suffers if you’re not looking at it head-on.

It’s also a shame that there’s no touchscreen option. That’s not totally unusual for the price, but it would have helped make up for some of the laptop’s other shortcomings.

There are stereo speakers built into the laptop, but as you’d expect they’re pretty weak and tinny. They’ll do the job if you’re on a video call or want to watch something on YouTube, but for music or even Netflix viewing, you’ll definitely want to connect your headphones.

There’s little to say about the keyboard and trackpad here, which are both par for the course for a budget computer.

The keyboard is pretty big, stretching most of the way to the sides of the device, though it’s a shame that Samsung has mostly achieved that by spacing the keys out rather than making the individual keycaps larger.

In typing the keyboard feels a little soft and mushy, not helped by fairly short key travel, but it’s responsive enough and gets the job done.

You’ll also find a power button sitting above the keyboard, though unlike many modern laptops there’s no built-in fingerprint sensor. The 720p webcam also doesn’t support Windows Hello, so there’s no biometric login option at all here – you will be typing a password or PIN in every time.

The trackpad is also typical. It’s large, which is welcome, but understandably made out of plastic. That makes it feel a little sluggish and adds a little friction as you drag your finger across, but you won’t find any better without spending much more.

And here’s the rub. So far the Galaxy Book Go probably seems fine – a little rough around the edges, but that’s what you get for a laptop that costs less than £500/$500.

The problem is all in the performance. This is one of a burgeoning range of Windows on Snapdragon laptops – devices powered by Qualcomm chips instead of Intel or AMD.

Qualcomm is probably best known these days for its Snapdragon smartphone chips, which power a huge number of Android phones and tablets every year. It now also produces laptop components using the same Arm architecture – the same basic tech that Apple has used to great success in its own in-house MacBook processors.

The Galaxy Book Go is powered by the Snapdragon 7c Gen 2, the latest version of Qualcomm’s less powerful tier of laptop chip. I’ve found it sluggish almost beyond the point of being useable, with basic tasks and simple apps hanging and freezing. Even running a single Chrome tab proved too much for this laptop at times.

If anything, the laptop’s benchmark results flatter it. They show similar performance to the Acer Swift 1 and Lenovo IdeaPad 3i, but in our testing we found that both those laptops, while basic, handled day-to-day web browsing and email without a hitch. I can’t say the same for the Galaxy Book Go.

When reviewing a laptop I normally make it my main device for the week, but I have to admit that I couldn’t bring myself to use the Galaxy Book Go much, either for work or browsing the web in the evenings.

It’s probably worth flagging that my review model runs with just 4GB of RAM. This is the only option in the US, though the UK and some other markets also get an 8GB RAM variant. Perhaps this will have superior performance – though with a £100 surcharge for the extra RAM (with no other spec changes) I personally wouldn’t pay the premium to find out.

The poor performance is made worse by the fact that Windows still doesn’t have full compatibility with Arm chips, meaning that some apps can’t run at all on Windows 10. This laptop is eligible for a free upgrade to Windows 11, which does at least include an Arm emulator – but that will add an extra layer of performance challenge that I simply don’t trust this laptop to meet.

The problem is that Windows is a complex operating system, and it simply can’t run well on such low-powered chips. At this price you’d be much better off looking at a cheap Intel chip if you really need Windows, or turning to a Chromebook. Samsung’s own Galaxy Chromebook Go is about the same price and comes with a less powerful chip than this, but because it runs the lightweight ChromeOS it offers much smoother performance.

For all its faults, Qualcomm’s 7c Gen 2 does bring one major strength: battery life.

In our testing the Galaxy Book Go lasted over 15 hours of continuous video playback – not the highest score we’ve ever recorded, but substantially better than most other budget rivals.

It’s a similar story in regular use, where you really won’t need to charge this laptop more than once every few days.

The downside is that when you do charge, it’s slow. The laptop comes with a 25W USB-C charger, but this only topped the laptop up by an embarrassing 6% in half an hour. That means you’ll probably need to be in the habit of charging this up overnight, as a quick plug-in won’t get you much.

Connectivity is another key strength. For one, despite the slim build Samsung has baked in a surprising array of ports. There’s a USB-C port on each side for charging and data (one of which handles video output too), one USB-A 2.0 port, a 3.5mm headphone jack, a microSD card slot, and even a Kensington Nano lock slot.

Just as importantly, there’s a SIM card tray, because like all Qualcomm laptops this supports 4G LTE. You’ll need an extra SIM card – you can’t piggyback on your phone’s data plan, disappointingly – but if you don’t mind the ongoing outlay it’s incredibly convenient to get access to data even when there’s no good Wi-Fi around.

You might have also seen a Galaxy Book Go 5G around – do note that these are different laptops. In addition to 5G, that model includes a more powerful processor and some other spec upgrades, so in turn commands a much higher price. This model is 4G-only, so won’t handle connections that are quite as fast – but there’s still little to complain about there.

There’s also Wi-Fi of course (though not the latest Wi-Fi 6 or 6E standards) and Bluetooth 5.1 to connect up headphones or other accessories.

The Galaxy Book Go is widely available, and starts from £399/$349/€499. You can buy it directly from Samsung, or from Amazon and other retailers.

It’s probably a much more appealing option in the US, where that price is cheap enough to perhaps make you overlook the performance problems – though I’d still hesitate.

In the UK and Europe however, the price feels like daylight robbery for what you’re getting. The performance simply isn’t good enough, and rival laptops – both Windows and Chromebooks – comfortably outshine the Galaxy Book Go.

The Samsung Galaxy Book Go may benefit from an attractive enough design, plenty of ports, and perks like excellent battery life and 4G connectivity, but its performance problems overshadow them all.

All the ports in the world don’t matter when a laptop is this slow and frustrating for basic, everyday tasks, and even at a relatively affordable price this is really a false economy.

You’re much better off spending a little bit more for better performance elsewhere – or turning to a Chromebook for a budget laptop you won’t want to throw in the bin.