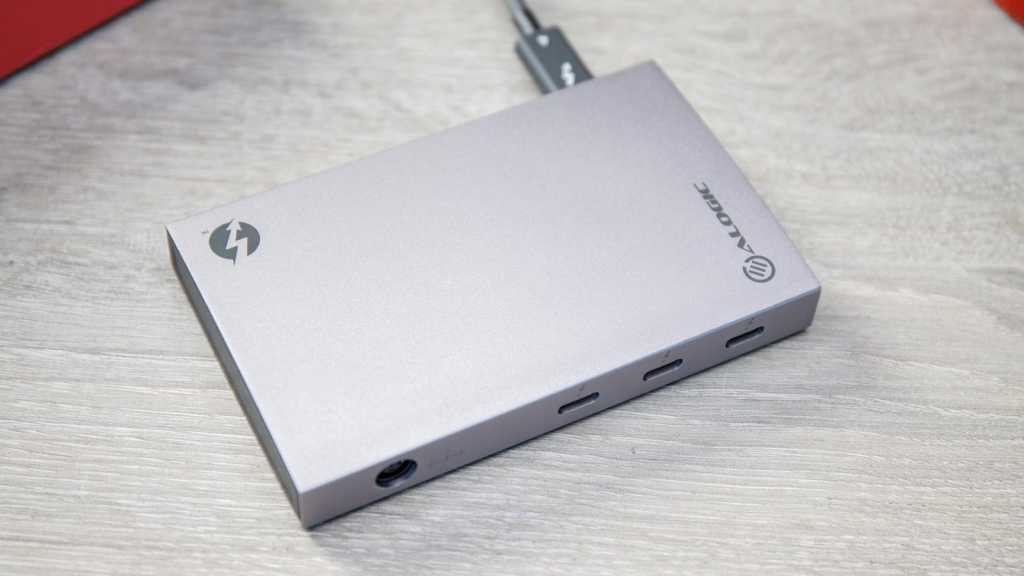 It’s an affordable modern hub that makes sense if you don’t need all the extra other ports you’d find on a larger docking station.

Instead of 11 ports, the Blaze Hub has just five, but they are all state of the art.

Some people don’t need a full docking station and a hub such as this is cheaper and much more compact.

What it lacks is a Gigabit Ethernet port for fast, stable wired Internet access. If you’re hooked on wireless, this won’t be a problem, but if your Wi-Fi is flaky then that wired Ethernet port can be a lifesaver.

Also missing are SD or microSD card readers. These can be useful for adding inexpensive portable storage but is probably the least sued slot on any dock, so its absence isn’t a big deal.

Some Thunderbolt 4 hubs don’t have a USB-A port, but the Blaze Hub has one, at the front, that is rated at 10GBps – faster than many that max at 5Gbps bandwidth.

This doesn’t match the Caldigit Thunderbolt 4 Element Hub, which boasts an impressive four such USB-A ports along one side, but if you need only one old-school USB port, the Blaze Hub will fit your purposes.

The most important ports, of course, are Thunderbolt 4, and each offers the certified 40Gbps plus 15W charging.

These can be used to add fast storage devices or any USB-C gear – TB4 is backwards compatible with USB-C and Thunderbolt 3.

Most users will want to attach at least one external display to their laptop, and TB4 works here, too.

TB4 will connect directly to a monitor with a USB-C port at the back. For other screens, you’ll need a USB-C display adapter, to either DisplayPort or HDMI.

Connected Thunderbolt 4 laptops will support up to two 4K displays at 60Hz. If your laptop uses USB-C, it’s limited to a single 4K (also at 60Hz).

Remember that Apple’s early M1-based Macs support just one external display, although there are workarounds for attaching more than one display to an M1 Mac.

With its overall 110W power supply, it can charge a connected laptop at up to 60W – maybe not enough to fully charge a large laptop but fine for most under 15 inches. It will still keep a 16in laptop charged but when the other ports are fully loaded, you might prefer a dock with 96W laptop charging.

The Thunderbolt 4 Blaze is a cute-looking hub, with the three downstream TB4 ports at the back and at the front are the more easily accessible USB-A port and the upstream Thunderbolt 4 port.

Nearly all manufacturers place the upstream port at the front, which we think fails to hide the cable, but the Blaze Hub is among good company, so we can’t single it out for complaint in this regard.

While it’s pretty dinky and weighs just 203g, it’s not strictly portable as you need to attach the power supply for it to work properly. But the whole package is easily transportable if you’re traveling between offices.

It ships with a Thunderbolt 4 cable.

Factor in the cost of extra display adapters if your monitors don’t have a USB-C port.

It’s an affordable modern hub that makes sense if you don’t need all the extra other ports you’d find on a larger docking station.