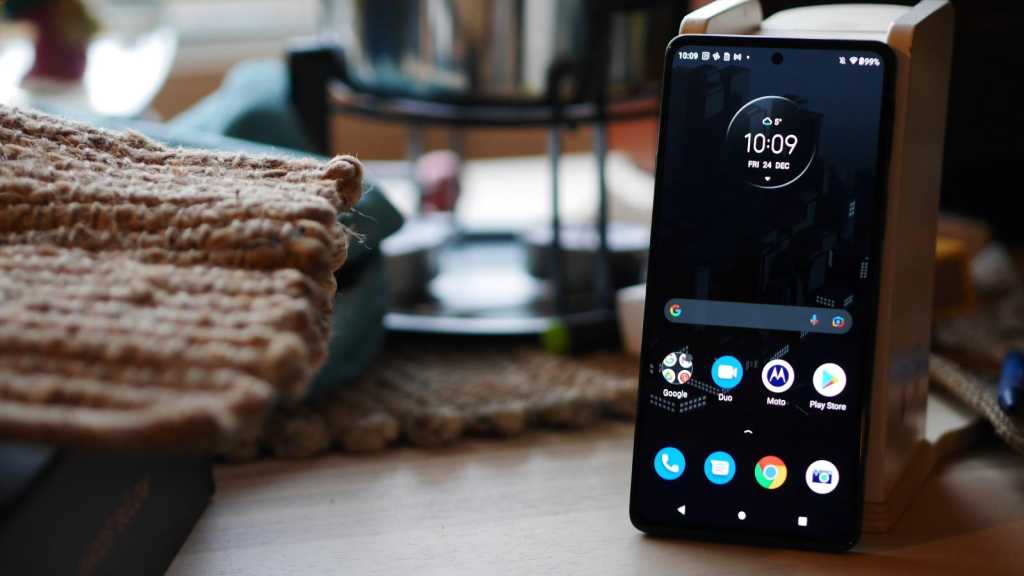 The Moto Edge 20 may be the middle child in the manufacturer’s 2021 smartphone line up but its the one to pay attention to. With a great screen, good battery life, a versatile camera set up and well-crafted software, it offers a lot for the price with relatively few drawbacks.

Lenovo, since it took the helm at Motorola, has transformed the brand. Releasing keenly priced handsets at every segment of the market, it is a pugnacious competitor and a name to watch as the mobile space becomes only more crowded and competitive.

The Edge 20 sits firmly in the middle of its most recent lineup between the Edge 20 Lite and Edge 20 Pro.

From a purely aesthetic perspective, this is clear to see – the Edge 20 is a plastic fantastic and proud of it. With a 6.7 inch 1080p 144Hz OLED display, a 108MP camera system with a 3X optical zoom, a 4,000mAh battery and a Snapdragon 778G processor. However, it has more than enough specs appeal to stand out from the crowd.

But does this mean that it deserves a place in your pocket? Read our full review to find out.

Long gone are the days when polycarbonate (read ‘posh plastic’) ruled the roost. The common smartphone in the present is a marriage of metal and glass presented in rectangular form, and deviations from this formula are rare to the point of obscurity.

And although the Edge 20 doesn’t present an alternative in terms of shape, it does in terms of material. For better or worse, there isn’t a hint of metal anywhere in the design, even the rear is made of plastic, and with a matte finish, it avoids fingerprints easily.

This doesn’t leave the device feeling particularly premium in the hand, however, it does make for some interesting changes to the smartphone formula. For example, where typically bigger smartphones mean heavier smartphones, due to the use of plastic here the weight of the handset has been kept to a minimum.

So despite the gargantuan 6.7in display, the Edge 20 weighs a mere 163g, which improves its one-handed usage exponentially. Paradoxically, the lack of weight leaves it feeling a little insubstantial, detracting from its ‘premium’ credentials, but the gains for usability are generally well worth the sacrifice. This is only aided by the 7mm thickness.

An unsung benefit of plastic as a material is its ability to bend and snap back into shape (within reason). What this means is that the Edge 20 is more likely to survive a drop relatively unscathed when compared to a device made out of harder materials, such as metal or glass. That said, it does flex a little under pressure, a consequence of the length of the handset, but unfortunate nonetheless.

From an aesthetic perspective, the Moto isn’t much of a looker. It has a certain anodyne chic about it, this is a phone that will fit in pretty much anywhere, but it doesn’t stand out in any particular way. From the grey colouring to the subtle ‘Moto’ branding on the rear, this isn’t a phone for people who like to express themselves through their devices. Frosted White is the other colour option.

The Edge 20 has more than a splash-proof coating with an IP52 rating. More than is usual for Motorola handsets.

No individual part of a smartphone comes with more marketing speak attached than the display, and here the Moto Edge 20 doesn’t disappoint. This is a 6.7in, Full HD+, 144Hz OLED with HDR10+, 1 billion colours and a 576Hz touch sampling rate – and breathe.

What these features translate to in practice is simple: a very good display. That is to say that it gets sufficiently bright to combat bright sunshine and dim enough to use in a pitch-black room. It has punchy, bold colours that don’t go overboard, and all the benefits of OLED are seen in the stellar contrast of the panel.

The various HDR certifications mean that compatible content looks particularly good, and the display, in general, is a joy to watch video on in particular. The lack of curved edges on the display makes handling easier and removes the potential for false touches.

In addition to the above, the 144Hz refresh rate makes navigation through the interface pleasant and smooth. By default, the device presents an ‘adaptive’ refresh rate, which cycles through at different speeds depending on the content you are viewing.

If you are reading, the refresh rate will drop, if you are gaming it will ramp up. This isn’t quite as smooth as on LTPO displays such as that of the iPhone 13 Pro, but helps to save battery life nonetheless.

The touch sample rate is impossible to measure perceptibly when compared to other devices, but responsiveness was excellent in general, with no missed presses or other incongruities.

The Moto Edge 20 comes with a competitive list of specifications for the price. Beyond its display, it rocks a Snapdragon 778G processor, 8GB of RAM, 128GB of storage and Bluetooth 5.2 support. It doesn’t offer expandable storage or a headphone jack, both of which are unfortunate given the plastic design.

In general usage, the device runs very smoothly. Although this perception is aided by the high refresh rate display, when simply navigating through the interface there was nary a stutter to be seen. Apps opened smoothly and quickly, even when multi-tasking. Things took a bit of a hit when moving to gaming, though.

Although the Moto can play any title in the Android gaming library some of the more intensive titles, such as PUBG, required a drop in graphics quality to run smoothly. Luckily, the device always kept its cool, never becoming overly hot in general use.

All of this adds up to a phone that has enough power for most people, most of the time, but the most hardcore mobile gamers will want to look for something with a bit more bite. Check out our chart of the best gaming phones if that’s you.

The era of high megapixel counts it seems is here to stay. Since the advent of the first 48Mp sensors in 2019, smartphones have come with ever-higher numbers in tow, trying to grab as much attention as possible in the process.

With a 108Mp sensor, the Edge 20 is a part of this rather than an outlier, not that this is detrimental in any way to the performance of the device itself. From the offset it should be noted, however, this is a binning sensor, meaning that nine pixels at each point combine into one. You aren’t getting 108Mp full resolution shots every time, instead, the Edge 20 takes 12Mp images.

And these for the most part are pretty good. Detail is well represented in most images, though sharpening halos do appear quite often, to the detriment of foliage in particular. Colours have a pleasant degree of saturation, though the cast of images can often be slightly too warm.

Things stay mostly positive when moving to the 8Mp telephoto lends with 3x zoom. Images come with plenty of detail, at the cost of a considerable uptick in noise when compared to the main sensor.

The 16Mp ultrawide lacks detail, but represents colour well – however its macro capabilities are nothing to write home about. As is the case with most macro modes on smartphones, the set-up for getting and framing the shot was rarely worth the finished result but at least there isn’t a pointless 2Mp macro camera here.

In low-light, predictably, things take a turn for the worse. The main sensor lacks any kind of image stabilisation, ensuring that any shot requiring a long shutter speed becomes a blurry hodgepodge.

The included Night Mode improves things somewhat but doesn’t compensate quite enough to bring the Moto into the upper echelons of camera performance. For the price point, it is perfectly adequate, however, it doesn’t compete with the big guns. For a similar outlay, the likes of an iPhone 11 will offer superior low-light photos.

With big screens come expectations of long battery life, and to this point, the Moto Edge 20 comes with a 4,000mAh battery packed inside.

At a time when much of the competition, including its cheaper sibling, come with 5000mAh units, the use of a smaller cell might come as something of a surprise. The theory goes that a smaller battery means less battery life – does this prove to be the case with the Moto?

Luckily, not so much. On my best day, across 22 hours of use the Edge 20 managed 5 hours of screen time, including around four hours of YouTube playback.

This figure will of course vary significantly depending on situations and use cases, but at the very least the Moto is an all-day smartphone. It might not be able to stretch usage into a second day, but what it offers will be more than sufficient for most users.

In our usual PCMark Work 3.0 battery test it lasted a reasonable but not special eight hours and 15 minutes. Charging via the included 30W charging brick is suitably fast, topping up the cell by around 55% in 30 minutes. Various rivals can offer faster charging, though.

The Moto software experience, now known as ‘MyUX’ is a known quantity. For a long time now the brand has taken Android and added a few useful tweaks and features while maintaining the fluidity and speed of stock Android.

Usual suspects such as the karate chop and double-twist to open the torch and camera respectively make their return, along with newcomers such as ‘Audio Effects’ which purport to improve the listening experience over Bluetooth audio.

A much-touted inclusion is ‘Ready For’, which is the brand’s answer to the like of Samsung’s DeX mode. This allows, with the use of a USB-C connection, the device to act as a quasi-desktop while mirroring its display to a compatible monitor.

The mode also allows for easy file transfers and the ability to use the phone as a webcam. Though it might not be of much use for many, it is a welcome inclusion nonetheless.

Overall, the ‘Moto’ take on Android is one that adds practical features and is thoughtfully designed, a far cry from the likes of Xiaomi’s MIUI and its incessant desire to ape all things Apple.

The Moto Edge 20  is available now for £429.99/€499 RRP directly from Motorola in the UK and Europe. Two colour options are available, Frosted Grey and Frosted White.

You can also buy it from the likes of Amazon, Argos, Laptops Direct, Carphone Warehouse and Very for prices as little as £349.

Another option around the same price is the OnePlus Nord 2 which sits atop our best mid-range phones chart.

The Moto Edge 20 is a middle child that manages to be more interesting than either of its siblings.

Offering a big, bold screen, versatile cameras, good battery life and useful software, it does a lot to set itself apart from the competition. And at a reasonable price if you don’t pay the full RRP.

But for the lack of stereo speakers, the lack of any premium styling and inconsistent low-light camera performance, this would be an instant recommendation.

Instead, it will serve as a great companion for most, but those who need the most power or the very best cameras should look elsewhere.