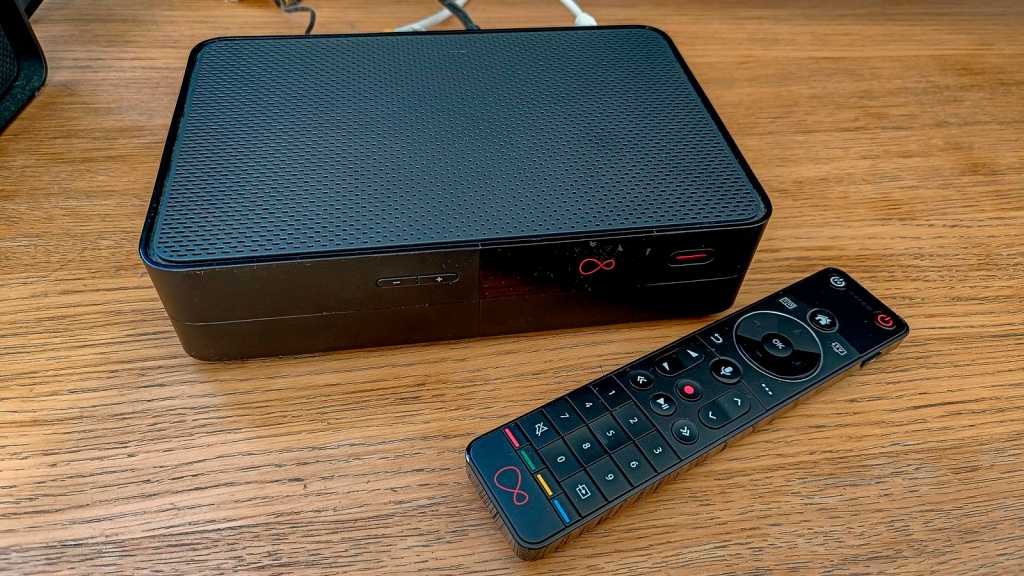 While Virgin TV 360 is a step up from previous TV boxes from the brand, it doesn’t quite match up to the multi-room viewing experience from Sky.

Virgin TV 360 is now the standard TV box included in any Virgin package. It comes with new profile options, tailored recommendations and a beefed-up remote in comparison to the Virgin V6 and TiVo boxes.

Virgin offers different entertainment packages, but even the most basic include over 100 channels that are available via Freeview. More expensive bundles unlock premium channels such as Sky Showcase and National Geographic, and there’s also bundles with Sky Sports and Sky Cinema for the sports fans and movie buffs.

I’ve spent some time with this entertainment package, testing out all the features, apps and software to see how it compares to some of the biggest rivals in the UK.

Virgin TV 360 provides 4K, HDR picture quality on compatible streaming services and channels. I tested this box on the Hisense 50in A7100F – a 4K TV in the 2020 range from the brand.

Just as you’d find on Netflix, Virgin TV 360 offers profiles for a more tailored user experience, with the ability to register up to six users. You can see our tutorial on how to set up profiles on Virgin TV 360 here. 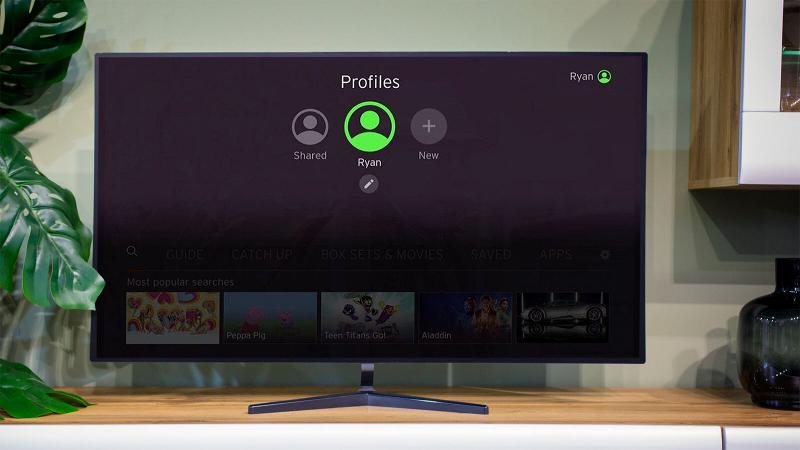 Watch lists are curated by each user. You can choose your favourite genres when you build a profile, and Virgin will then suggest TV shows and movies for you to watch in the home section.

In addition, each profile will save where a user has paused something, so content can easily be resumed.

The TV guide has had a redesign from the previous generation, with a much cleaner layout, as well as sections for apps and live TV altogether in one place. 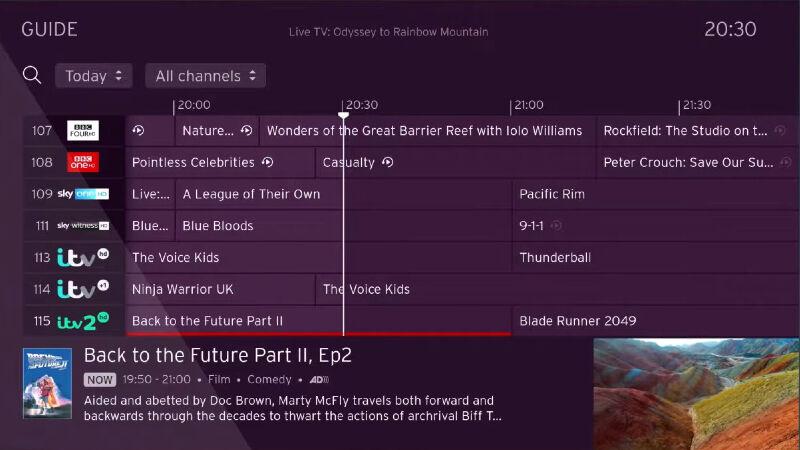 Just like on previous boxes, you can play, pause and rewind TV, and record content – with the option to choose to record specific episodes and movies, or an entire series. You can also start a show or film from the beginning if you start playing it midway through – though some channels such as Channel 4 won’t allow you to fast forward through the ad breaks.

You can record up to six programmes at the same time, whilst watching a seventh.

The Virgin TV 360 remote is a big step up from what comes with the V6 box. The buttons are laid out clearly and are colour coded which is useful for people with visual impairments.

There’s the option to use voice control on the remote, which you can use to open apps, pause, skip forward or back, and navigate the TV guide. 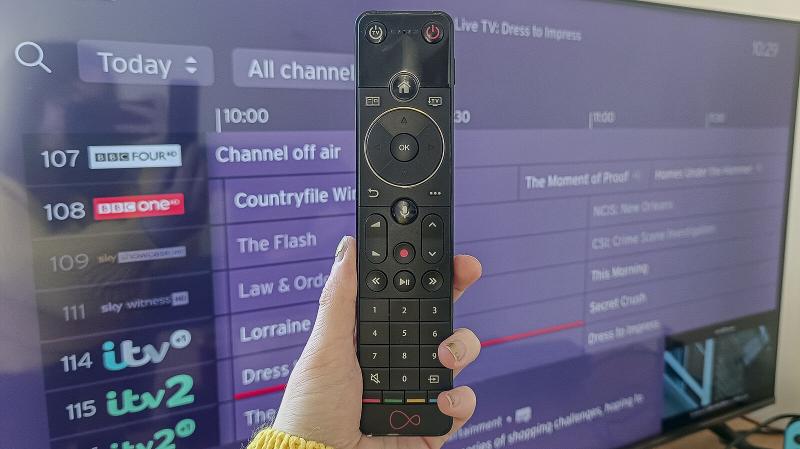 There is no headphone jack, and the remote is not as stylish as what you will find on the likes of Sky Glass. However, it is easy enough to get the job done. My only complaint is that turning on the 360 box does sometimes incur a bit of a wait.

There are, however, some big omissions from this list. These include Disney+, Now (formerly Now TV), Apple TV+ and BritBox. Several of these are available on BT and Sky, with the latter having the strongest line-up.

Now is the streaming app alternative to Sky Entertainment and Cinema, which can be added to your Virgin TV package – but you can’t get the flexible streaming app on your TV.

It is possible to bundle streaming subscriptions such as Netflix into your Virgin Media bill to keep all your payments in one place. However, you don’t get any discounts by doing so.

If you want to watch Virgin TV on your mobile or tablet, then you can download the Virgin TV Go app. This includes all TV channels in your package, box sets, catch-up TV and anything you have recorded on your main box. 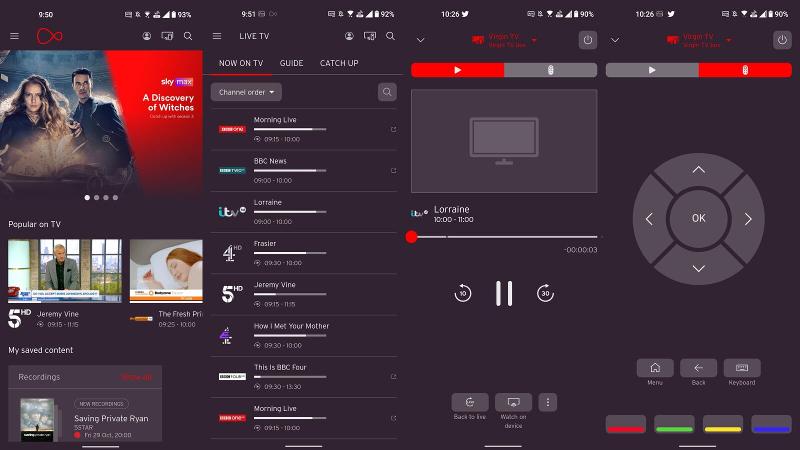 For live TV, the app has a player which opens for most channels. However, for anything on the BBC, it will ask you to open or download the BBC iPlayer app.

You can download selected titles to watch offline on your phone and register up to five devices on one Virgin TV Go account – though it only allows two users to watch simultaneously.

This app can also be used as a remote control for your TV. Thankfully, Virgin has done away with the separate TV control app and rolled all these features into one place.

You can navigate through the guide and pause and rewind content just as you would on the remote. You can also use it to record if you are outside of the house. However, for all of these features, your box must be on and not in standby mode. 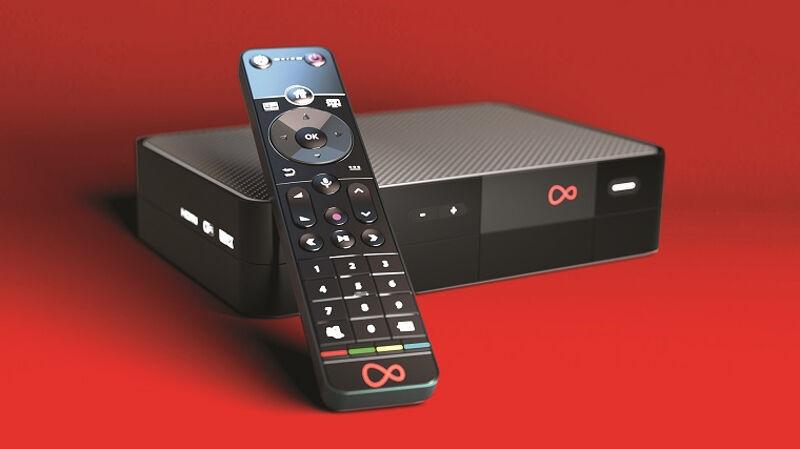 To watch recordings, you must connect your phone to your box first and be on the same internet connection. I found that I could not turn on my box via my phone, and instead had to resort to the remote. It did, however, work to turn the box off.

If you are already a Virgin V6 customer, then you can simply get a software upgrade to your existing box and receive the new remote in the post. If you’re new to Virgin or an existing customer with a TiVo box, then you will need an engineer to come and fit the box.

Virgin offers the option to have up to two Mini boxes around the house, which allow you to watch Virgin TV 360 in other rooms in 4K and sync all your home profiles and watch lists.

However, there is a massive downfall – the Mini boxes also need to be fitted with a coaxial cable. 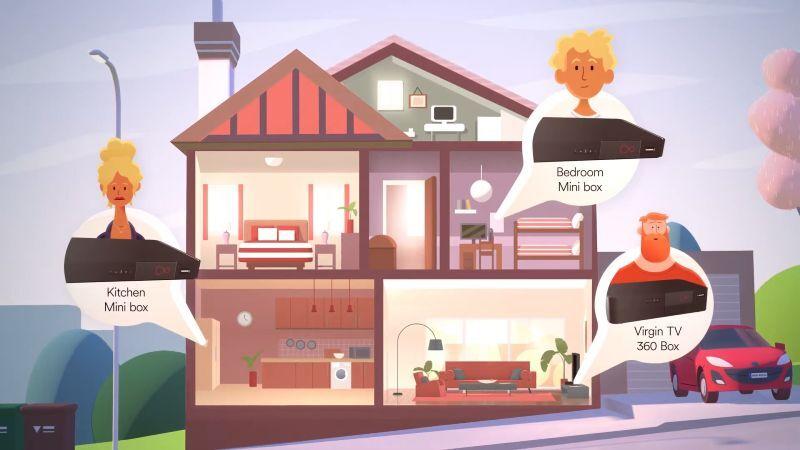 This means they will need to be hardwired by an engineer, just like the main box is – and trying to find this information on the Virgin website is like trying to find a needle in a haystack.

This isn’t convenient if you’re renting or want a simple set-up process for having Virgin TV in different parts of your home. Sky offers the Sky Mini box for Sky Q and the Sky Puck for Glass. Both of these work over Wi-Fi (as you would expect in 2022), making multi-viewing in the house extremely easy.

The only benefit of having a Mini box is that you can get 4K streaming in other parts of the house – Sky only offers Full HD 1080p on its Mini boxes for Sky Q.

The more flexible option for multi-room viewing is to use a phone or tablet with the Virgin TV Go app.

Virgin TV 360 is the standard TV box across all Virgin packages now, but you must include broadband as a minimum.

Currently, this starts from £33 per month on an 18-month contract for 100Mbps broadband, landline and TV with over 100 channels available. You can sign up for Virgin TV 360 over on the Virgin website.

If you want more premium channels from the likes of Sky, the price of the packages increases. To include both Sky Sports and Sky Cinema, along with over 200 TV channels, it’ll set you back £79 per month.

In addition, the cost of the package increases substantially once the first 18 months are up, though you can cancel, change, or renegotiate your contract with the sales team at the time. Currently, a £35 set-up fee applies to all contracts, but Virgin does sometimes discount or waive this for customers.

Virgin does offer packages for just TV and broadband, but these are more expensive than the full bundle, with prices starting at £45 per month on an 18-month contract.

If you want the Mini boxes as well, this will cost an extra £10 per month for one box, and £15 per month for two, making costs quickly add up.

Existing customers of Virgin who have a V6 or TiVo box on contract can upgrade these boxes by calling Virgin or going on the website. It costs £24.95 to upgrade a V6 box and £49.95 to upgrade a TiVo model. Alternatively, customers can renew their contract to waver the one-off cost.

You can see more about upgrading to Virgin 360 here:

The two biggest competitors for Virgin when it comes to entertainment packages are BT and Sky. BT offers several different TV packages, with prices starting from as low as £15 per month (excluding broadband and landlines).

These packages lock you in for 24 months – six months more than Virgin. However, it does offer more in terms of apps and channels, especially when it comes to sports. You can read more in our BT TV VIP package review.

In addition, Sky offers a better user experience for multi-viewing and more apps for streaming.

Virgin TV 360 is a step-up from the previous V6 and TiVo boxes and the former needn’t even change box. The interface is cleaner, the profiles are a nice touch for different members of the household and the remote with voice search provides much better accessibility.

Virgin’s 18-month plans are more compelling than rivals by being shorter. However, for more channels and Mini boxes, you’ll end up paying premium prices. Plus, the service is lacking in having some major streaming apps, including Disney+.

Having the Mini boxes only connect via a coaxial cable also detracts from making multi-viewing flexible for users. If you’re not too bothered about this, then Virgin TV 360 is still a viable option – but it doesn’t match what is on offer from Sky.