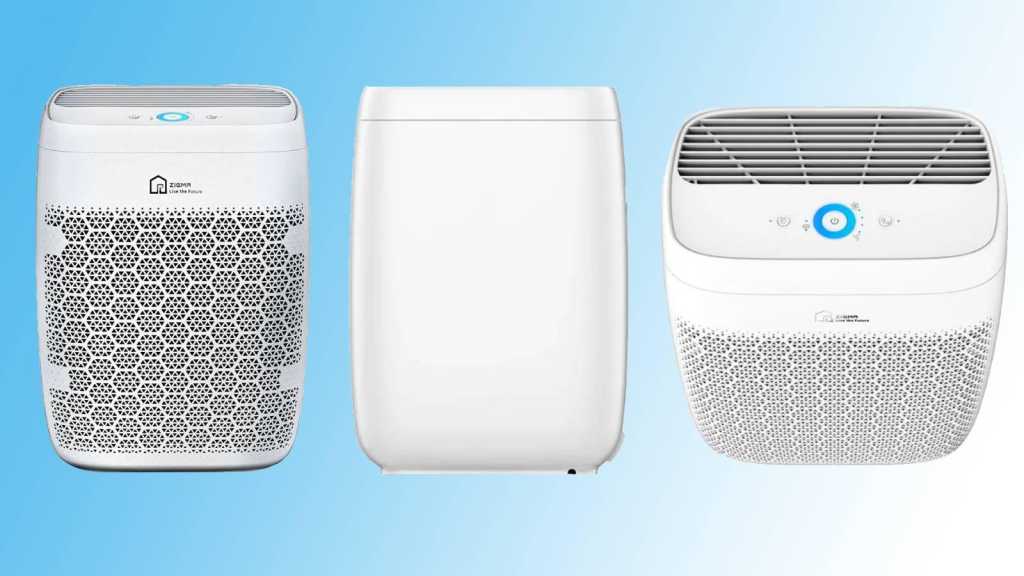 If you’re looking to improve the air quality of your home and don’t want to spend hundreds, the Zigma Aerio 300 Smart air purifier is a great choice that doesn’t compromise on features or performance.

Air purifiers have grown in popularity over recent years, as more people spend more time at home and outdoor air quality continues to get worse in built-up areas. There are plenty to choose from, but it’s often confusing to understand what you’re getting, and the most advanced units are often expensive.

Zigma’s Smart Aerio 300 Wi-Fi air purifier tries to buck that trend though, offering a 5-in-1 HEPA filter system, UV-C lamp and negative ioniser for less than £200/$200. The question is, is fresh indoor air worth that upfront cost? I’ve been testing the Aerio 300 out for a couple of months, and here’s what I think.

The shape and size of an air purifier can be a dealbreaker depending on where you want to use it, and the Zigma Smart Aerio 300 will certainly take up a decent amount of space measuring in at 350 x 220 x 495mm. That means it’s better suited to larger rooms than small office spaces, and with the Aerio 300 able to clean a space between 23-40m², it’d be a bit overkill in a small box room.

Size aside, the rectangular air purifier sports a large honeycomb grille on the front that houses the filtration system within, with filtered air vented from the top. There are also two sensors on the left side of the purifier that allow it to detect the current air quality, so wherever it sits, you have to ensure it has at least 30cm of space around it.

You’ll find three buttons on the top of the air filter; a small button to enable/disable night mode, a larger button that controls power and the ability to cycle between the different modes, and a second small button that enables a UV-C light and ioniser. 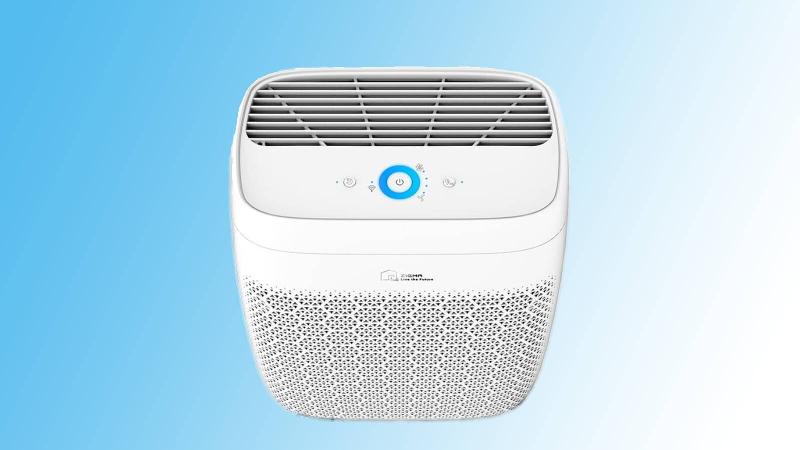 There’s also a bright LED status ring that’ll glow blue, green, yellow or red depending on current air quality. It is fairly bright, but the good news is that it can be disabled by toggling on the night mode – handy if you want to use it in a bedroom while you sleep.

The only real issue I have with the Aerio 300 is that the purifier loudly chimes whenever you switch modes, despite smaller LED lights to indicate which mode it’s currently in – even when in automatic mode, which we detail later.

When it comes to setting up the Zigma Smart Aerio 300, it’s a fairly straightforward process.

The filter is already installed within the body of the purifier, but you have to remove the plastic wrapping before first use – it won’t do much if it can’t pass air through the filter! It’s easy to access, with the honeycomb grille front popping off with a bit of pressure, and the filter easily slots back into place.

From there, it’s as simple as plugging it into a power supply and pressing the power button – a perk of having most main controls on the unit itself, rather than exclusively relying on an app.

Wi-Fi is a selling point of the Aerio 300 though, so most people will want to connect it to their home networks and control it with their smartphone or virtual assistant. Thankfully, that’s a process that takes no longer than two minutes and only requires you to download the Zigma app on your iPhone or Android. More on what you can do with the app a little later.

Using the power button, you can cycle through the Zigma Smart Aerio 300’s various modes – first gear, second gear, third gear and automatic. Many of these work as advertised, with first gear offering the slowest air intake and third gear offering the fastest intake, while automatic will adjust depending on the current air quality in your room.

As the gear increases, so does the volume. At its lowest speed (also used in its Night Mode) the Aerio 300 is barely audible, but that quickly changes as you crank up the power. It’s very audible when cranked to its third gear, and I found that I’d actually have to turn up the TV to drown out the monotonous sound it generates. It isn’t irritating, per se, but it’s certainly noticeable.

The good news is that it won’t often need to ramp up to full power, but if you’re a smoker or intend on having the air purifier in a shared space as a source of clean air, it’s worth considering. 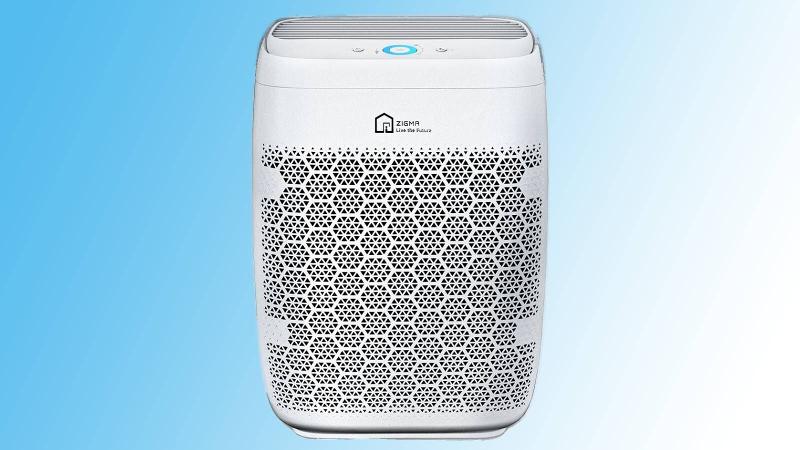 When it comes to purifying the air, the Aerio 300 has a 5-in-1 filter system with an H14 HEPA medical-grade element that filters up to 99.97% of fine dust, pet hair, mites, air pollution, PM 2.5 (pollutants smaller than 2.5 microns) and ultrafine particles under 0.3 micrometres.

That’s backed up by an activated carbon filter that helps remove lingering smells like pets, kitchen smoke, cigarette smoke as well as neutralising formaldehyde and other harmful substances found in the home.

It doesn’t stop there either; the Aerio 300 also has a UV-C LED bulb that aims to kill viruses and bacteria in the air – a particular benefit with everything going on in the world right now – and it has a negative ioniser to keep the air clean too.

The Aerio 300 has a Clean Air Delivery Rate (also known as CADR) of up to 330m³ an hour, allowing it to clear up to a 1580 sq ft space within an hour. That means, depending on the size of the room it’s in, it can deliver fresh indoor air up to four times an hour, making for the perfect companion in low circulation areas of the home.

Although it’s not marketed as a fan in any way, the clean air produced from the upwards-facing outlet creates a stream of cool air circulating the room, potentially negating the need for a separate fan – but I’ll have to test that in the summer months and not the cold depths of winter to confirm.

While it’s hard to state just how well the various components of the Aerio 300 work together to purify the air, the air in my bedroom certainly smells fresher without needing to open the window (it is winter, after all!).

It also quickly clears lingering vape smoke, so my room no longer looks like a 90s disco after a quick smoke break, and I find it easier to breathe through my nose too – a benefit that comes from having less dust and fine particles in the air.

Of course, the filter will need to be replaced every now and again to keep the air as fresh as possible. Zigma estimates that you’ll get between six and nine months depending on your usage, and it’ll cost £41/$56 to replace it.

This is signified by a blinking red light on the status ring, and you’ll get a notification in the app too, at which point you’ll have 168 hours of runtime before the device shuts itself down until a new filter is used.

The Zigma app for iOS and Android is a must-have if you want to truly get the most out of the Aero 300. 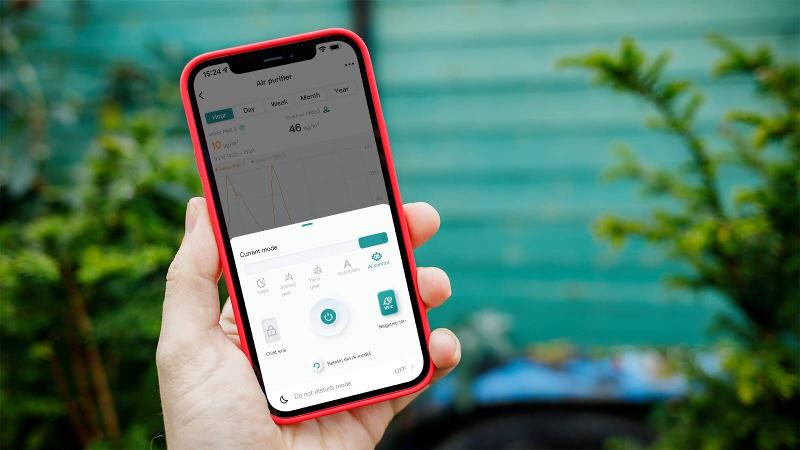 As well as providing access to the same controls as on the air purifier itself, there’s an additional mode available exclusively via the app: AI. Don’t be fooled, it’s not simply a rebranded automatic mode either; as well as adjusting the intake depending on current air quality, it’ll take other elements like outdoor air quality and your regular schedule into consideration.

It’s the mode I leave the Aerio 300 in most of the time, and I find that it does a good job at kicking in only when needed. It gets more accurate the more it’s used, but if you find it isn’t performing as you’d like, you can easily retrain the AI model via the on-screen controls.

Aside from controlling the purifier, the app displays the current battery life of your H14 filter with an estimated time (in days) until you’ll need to replace it. There’s also a handy graph displaying recent air quality both inside and outside your home using local data, which can be viewed in hourly, daily, weekly or monthly formats, and it’ll even break down your power usage in watt-hours (Wh) too.

You’ll also find a Do Not Disturb toggle that, contrary to my assumptions, doesn’t stop the annoying chime on the purifier when it changes mode. In fact, as far as I could tell, it didn’t change its operation in any way.

And, for those who appreciate a good schedule, you’ve got basic scheduling available too.

Though it’s advertised as working with Amazon Alexa and Google Home, the integration is very basic. Using Alexa, you can turn it on and off, enable a child lock and toggle the ion/UV-C lamp, but you can’t actually change the current operation mode or enquire as to the current air quality in the room.

It’s not something I use on a daily basis, despite using Alexa to control other smart home tech.

It might be on the large side, but the Zigma Smart Aerio 300 air purifier represents great value for money with a 5-in-1 H14 filter providing clean indoor air, and the UV-C lamp and negative ions are an added perk. The combination of onboard controls and smart controls via the companion app is great, although it’s a little odd that you can’t enable the AI mode without the latter.

The only real complaint is the noise at higher gears, which becomes loud enough that you’ll have to adjust the volume of the TV to drown it out.