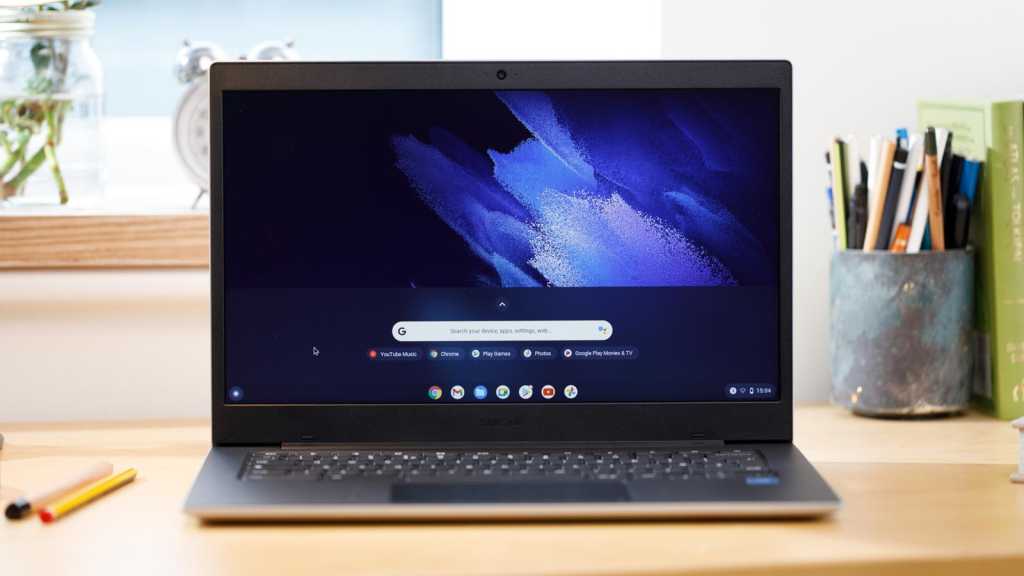 A great typing experience and impressive connectivity options and solid battery life does seem to make the Samsung Galaxy  Chromebook Go a tempting option. But this is spoiled by a poor display that is only good for documents and web-browsing.

Samsung pulled out of the laptop market in Europe a little while back, which was a shame as I often found their products to be very good. Now, the Korean company is back in the UK (and USA) with a brand new affordable Chromebook.

So, is it a triumphant return? Here’s the full Tech Advisor review of the Samsung Galaxy Chromebook Go.

While the name might be a little too close to Google’s Pixelbook Go, the price and reduced specs show that Samsung isn’t quite taking aim at that particular model, but rather offering a simple and affordable Chromebook that should appeal to most people.

The plastic casing means that the device is reasonably lightweight (coming in at 1.45kg/3.2lbs), but you wouldn’t want to drop it too many times. Although, Samsung does state that the device has passed several MIL-STD-810G tests, so it could be tougher than it looks.

Silver is the livery of choice here, with the colourful Chrome logo adorning the top corner of the lid, which I have to say is a little more cheery than the monochrome version that’s becoming the norm across Chromebooks in the past year.

Turning the device over reveals twin speakers, while the flanks are home to a range of ports that include two USB-C, one USB-A (3.2), microSD card reader, a Nano Security Slot (think Kensington Lock), headphone jack and a SIM card tray. The latter is probably one of the main reasons for the ‘Go’ part of the name.

Opening up the laptop reveals the 14in display with a webcam sitting above it. The display is surrounded by a textured plastic casing that looks a little cheap, and this motif continues to the keyboard & trackpad surround and keys themselves.

It’s not bad as such but does remind you that this is not a premium model.

The long, single hinge holds the display in place through a variety of angles, with a full 180-degree being available if you want to lie the laptop completely flat against the floor or desk.

In use, the island-style keyboard is very pleasant to use. There’s a little travel when keys are pressed, and the experience manages to avoid the sponginess I’ve encountered with other affordable Chromebooks.

The trackpad is a similar story, with reliable responses to taps and gestures, plus a satisfying click that sounds solid and lets you know that your commands have been registered by the device.

Samsung states that the keyboard is spill-resistant, so it should survive an accidental encounter with a coffee. It’s not clear how much liquid it can endure, so I didn’t pour a bottle of water over the device but know that you could be ok if the worst happens.

Samsung has opted to use a non-touchscreen display on the Galaxy Chromebook Go, which is presumably to keep the price down. While the touch interface on a Windows laptop feels a bit of an extra feature, over the last couple of years it’s become an integral part of ChromeOS due to its focus on the web and online apps.

That doesn’t mean you can’t get plenty of stuff done, but it took a while for me to stop tapping the display and wondering why nothing was happening.

The 14in LED panel has a slightly frosted appearance to stop it reflecting back any strong light sources, which is something you won’t get on a touchscreen model. It runs at a maximum resolution of 1366×768, which is disappointing in this age of Full or Quad HD displays, but it’s a perfectly serviceable screen that will allow you to write documents and surf the web without issue.

I did find it rather too finicky when watching streamed video though. Using the new Wheel of Time series on Amazon Prime Video, it was noticeable that moving the screen angle or my seating position would affect the colour, contrast and basic viewability of the show.

This is true on a lot of cheaper panels, but it did seem more pronounced with the Chromebook Go. When everything is lined up properly, the display looks good, but if you’re watching with friends or tend to be a bit fidgety, then you might find the experience a bit frustrating.

Another thing that might prove difficult is working outside in strong sunlight, as I measured the maximum brightness as 320 nits, which would struggle against a summer’s day. For inside and more cloud obscured weather, you should find the Chromebook Go a very usable option, with the caveat on the video streaming performance.

Moving from video to audio, the Go comes with twin 1.5W downward-firing speakers. I wasn’t expecting much from these, as this is a lower-budget device with a plastic casing, but the sound they produce is better than you might think.

The volume gets pretty loud and while there’s the traditional lack of bass you find in most laptops, the sound separation is decent, I didn’t notice any distortion at full volume, and there’s a reasonable sense of depth to the mix. Not bad at all.

Video quality on the Chromebook Go doesn’t punch above its weight like the speakers manage to do. Topping out at 720p, the webcam is typical of lower-end laptops in that it’s passable when you have lots of light, but still remains grainy and softly-focused.

Move to a less well-lit environment and things take a sharp nose-dive. You can still make Zoom calls and work-from-home meetings, but I wouldn’t bother cleaning the room up beforehand, as no one will be able to see what it looks like.

In this department, Samsung has thrown in something of a surprise. Not only do you get the latest Wi-Fi 6 capabilities, but if you want to stay online when you leave home or don’t have a public Wi-Fi connection available, then there’s a SIM card slot that will let you access LTE networks.

Obviously, this will require a separate contract for the card, but if you know you’re going to use it often, this could be a real game-changer for road-warriors or those who struggle to connect to Wi-Fi when out and about.

It’s limited to 4G, but that means you’ll find wider network coverage when outside major cities and might also be able to get cheaper plans compared to the spanky new 5G ones.

There’s also Bluetooth 5.1 on board, so you can stream audio out to speakers or headphones when you don’t want to use the speakers.

I’ve outlined the ports earlier in the review, but to clarify, here’s what you’ll find on the Samsung Chromebook Go.

It’s a decent selection of options, which should enable users to connect a mixture of new and older devices. Certainly better than the solitary USB-C port that we’ve seen on far more expensive devices.

Powering the Samsung Chromebook Go is a 1.1GHz Intel Celeron N4500, which is a humble chip but a step up from the earlier Celeron generations found in rivals like the Asus C423NA Chromebook and Lenovo IdeaPad 3 Chromebook.

Samsung goes with 4GB of RAM, which feels a bit stingy but does match the allotment given to the aforementioned Lenovo IdeaPad 3 (the Asus has 8GB), and storage is given 64GB, which is quite acceptable for a cloud-focused Chromebook.

In real-world use, I didn’t experience any problems with performance. Websites opened quickly, Google Docs was very happy to work flawlessly while music was streamed in the background, and enjoying shows on Netflix or Amazon Prime Video (display issues aside) didn’t cause any stutters or syncing problems.

Gaming was off the menu for the most part, as the majority of titles require touchscreens due to being Android apps. You can still enjoy the odd web-based title if you’re desperate, and the Chromebook Go can handle those just fine.

For more technical performance analysis, I put the device through our normal barrage of benchmark tests, which produced the following results:

These are respectable scores for a budget device and put the Samsung Chromebook Go above the Asus C423NA and Lenovo IdeaPad 3 Chromebooks, which are its direct competitors.

Samsung claims that the Chromebook Go can last for around 12 hours from a single charge.

In our standard battery test that streams an HD video on loop, the device managed to survive for 10 hours and 47 minutes. This means you can use the Chromebook all day for work and possibly even have a little spare change for the evening.

The included charger wears the legend ‘Super Fast Charging’ and restores the Go to full health in around 2 hours.

As with all Chromebooks, the Go comes with ChromeOS rather than Windows or macOS – although you can buy a Windows version of the laptop for the same price.

If you’re unfamiliar with the platform, take a look at what is a Chromebook? which gives you a decent overview of what ChromeOS has to offer.

Essentially, if you’ve used the Chrome browser before, then you’ll be instantly familiar with ChromeOS, as it’s primarily based on using the browser to access online services and programs.

You’ll need to be happy using Google apps, as the company is the creator of ChromeOS and Chrome, and Chromebooks require a Google account to work.

This has real advantages though, as moving from one device to another will find all of your files and settings in-place (aside from anything you download to the local hard drive), and various services, apps and even games sync up seamlessly between each other.

You can use a variety of apps offline, which will then sync up any changes once you find a Wi-Fi connection (or LTE in this case), plus Chromebooks now have access to the Google Play Store, so many of your favourite Android apps work on the laptops.

Be aware though that you’ll struggle to find good photo, video and audio editing software on Chromebooks, and Microsoft Office runs as a limited feature on-line version rather than the full-fat implementations you’ll find on Windows and macOS. But, if your demands are reasonably light, then Chromebooks really can offer a streamlined and pleasant experience.

The Samsung Chromebook Go is available directly from Samsung for £399/US$349. If you want to make use of the LTE capabilities, then you’ll also need to factor in a monthly plan with a carrier of your choice (US customers need to order carrier-specific versions of the Chromebook Go).

To see which other options are available, read our roundup of the best Chromebooks.

The Chromebook Go is very much a mixed bag. Using the keyboard is enjoyable, the audio is good and there is a decent selection of ports and connectivity options.

If you’re looking for an LTE compatible Chromebook, then there isn’t a lot that offer that feature, so the Go can certainly put that among its boasts.

Sadly, the main downside is the lacklustre display, which not only lacks brightness but also has poor viewing angles, colour and resolution. With Samsung marketing the Go as a student device, I can’t see too many being happy with streaming video that is difficult to enjoy, especially if doing so with other people.

If you’re looking for a simple, reasonably affordable writing machine for documents, spreadsheets and research, then it’s a decent choice. But, anything outside of that will most likely leave you wishing you’d gone for a different device.