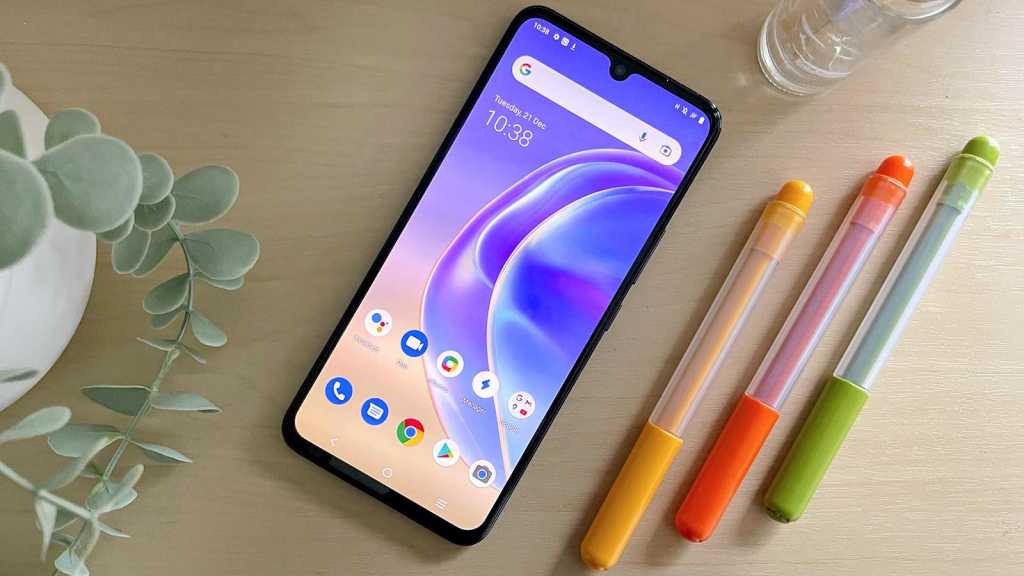 A great phone if you care about taking selfies or recording video with the front camera. The V21 5G also benefits from a good-quality screen, but there are compromises elsewhere you’ll need to be able to live with.

Vivo is the next Chinese phone brand the world is about to sit up and take notice of. Just when you thought there was literally no space for another mid-range challenger, Vivo somehow manages to stand out from the crowd.

Its phones typically have one feature that rivals at the same price do not and the V21 5G’s party trick is its selfie camera. The 44Mp shooter has optical stabilisation which is unheard of on front-facing cameras. At least it’s the only one I’m aware of to possess OIS, tech typically reserved for the main rear camera.

It takes great photos, even in low light, and could make this the phone selfie addicts or those that need to use the front camera to shoot videos for TikTok, YouTube or Instagram.

But is the rest of the V21 up to scratch? You’ll find out if you keep reading.

The V21 is a slim phone at a whisker over 7mm thick. The rear camera assembly sticks out, as it does on so many phones, and there’s added interest here with a stepped section containing the flash.

Vivo supplied me with a Dusk Blue phone to review, which is much more sombre and serious-looking than the Sunset Dazzle colourway. Maybe I was hoping for something a little more exciting because of the sparkly box which sets expectations high.

And while some versions of the phone just have a simple Vivo logo, European models are tarnished by large CE and bin logos, plus the model number and Vivo’s full company name.

You wouldn’t necessarily know the frame and back were made from plastic: the smooth matt finish of the back in particular could easily be glass, and there’s a depth to the colour when light shines on it.

On the right side is a textured power button below a volume rocker and the SIM tray is located on the bottom edge, opposite the speaker grille.

Although there’s a speaker just above the screen, that’s for phone calls only: sound is mono from the V21 and it’s surprisingly tinny with no bass. There’s no 3.5mm headphone jack, but there is Bluetooth 5.1 so you can connect wireless headphones. And in the box you’ll find wired headphones along with a USB-C to 3.5mm adapter.

Unfortunately, there’s no IP rating at all so, technically, you shouldn’t allow the V21 to get wet. It’ll probably survive the odd splash and use in light rain, though.

Vivo may have trimmed some specs in order to hit the V21’s price point, but the screen isn’t one of them. And since it’s so important, that’s a very good thing.

It uses AMOLED tech which means great viewing angles, colours and contrast. It also means you can have an always-on display if you don’t mind taking the hit on battery life. It’s something even owners of the latest iPhone don’t get, and if you use your phone instead of a watch to keep track of time, it’s a real bonus (especially as there’s no notification LED).

It’s bright enough, too, at around 500 nits when you push the slider all the way to the right. But it’ll go even brighter outdoors when it needs to.

Some may say the ‘water drop’ notch is a bit old school and that Vivo should have gone with a more modern-looking punch-hole design but given the quality of the camera it houses, it’s easy to forgive. And you can effectively hide it with some of the default wallpapers that are black at the top.

What you won’t notice are the two LED ‘spotlights’ that hide in the bezel just above the screen. They’re called spotlights because they don’t just light up briefly like a flash: they illuminate you so you can also shoot video in dim conditions, as well as lighting your face for selfies.

The other hidden feature, previously the preserve of flagship phones, is an under-display fingerprint sensor.

Though it is capable of running at 90Hz, the screen’s default setting is 60Hz, again to maximise battery life.

You’ve no right to expect flagship-level rear cameras at this price, and you don’t get any. If you want those, look to Vivo’s X70 Pro+, which is a true flagship.

The main 64Mp camera is capable of very good photos and has OIS which helps with sharpness in low light. Don’t be fooled by the option to switch to 2x in the stock camera app though: there is no telephoto lens.

To switch between lenses you have to tap on the Lens button and you can switch between wide, ultrawide and super-macro lenses. That’s more of a hassle than just having a series of zoom levels at the bottom of the screen.

As with so many 8Mp ultrawide cameras on mid-range phones, image quality is merely decent, but nothing special. And the 2Mp macro lens is almost there for show, because buyers want at least trio of cameras these days.

It’s the selfie camera that shines here, producing sharp, detailed photos both indoors and outdoors. Front cameras are usually the second-class citizen but, with roles reversed for the V21 5G, it’s the ideal phone for anyone who takes lots of selfies or needs to record video of themselves.

There are lots of filters and effects to choose between, including one which makes the background monochrome and leaves your face in colour. The portrait mode takes this much further with lots of beauty options such as making your face thinner, changing the appearance of your chin, nose and cheeks. The aperture slider simulates bokeh and you see in real-time how the background will look.

Unfortunately, with no depth sensor, what’s background and what’s not is determined by software and that means it’s not amazingly accurate. Wisps of hair might be blurred, while true background elements are not.

When shooting video, it’s worth noting that the OIS doesn’t operate if you select 4K video, and the only other options are 1080p and 720p. Something that could be a deal-breaker is that you can record only at 30fps with the front camera.

It’s great to see 8GB of RAM, and the reasonable amount of storage can be supplemented via an inexpensive microSD card.

But, Vivo has cut a rather large corner in the processor department with the 800U. This is a chip we’ve seen in much cheaper phones, such as Xiaomi’s Redmi Note 9T which we reviewed almost a year ago. It’s a decent budget chip with 5G support, but here it doesn’t match the price point too well.

It’s not to say the V21 doesn’t perform well in day-to-day duties, it does. Apps launch swiftly enough, Android 11 runs nice and smoothly. But it’s not a great choice if you love to play games and want them to run at 90Hz and at high detail levels.

You can play games and the V21 won’t get overly hot, but you’re better off going for a gaming phone at a similar price (or slightly more) if this is a priority. As you can see from the results below, it lags behind other mid-range phones.

If there’s some good news, it’s that Vivo doesn’t weigh the phone down with many additional apps for Western markets. In fact, considering how much we criticised previous Chinese versions (such as the V20), I was surprised at just how close Funtouch 11 is to stock Android 11 in UK guide.

By default, you have both multiple home screens and the app tray which is accessible from any home screen when you swipe up from the bottom of the screen. There’s a smattering of extra apps such as iManager which frees up RAM and can performs security scans, but no extra folders of games and apps which are actually just shortcuts to Vivo’s own storefront.

If you want an absolutely stock experience, you’ll still need to opt for one of Google’s own phones, but don’t be put off by Funtouch on official UK versions of Vivo phones.

There are no surprises here: a 4000mAh battery is relatively standard on so many Android phones, though it’s impressive to see in a handset this thin.

It’ll last up to two days with light use, but once you start enabling features such as the 90Hz refresh rate, the always-on screen and use demanding apps (such as games), that estimate will shrink rapidly.

Unfortunately, the budget doesn’t extend to wireless charging, but the 33W fast charger included in the box will replenish well over 60% of the battery’s capacity in just half an hour.

Although it was launched back in the summer, the V21 5G has gone on sale in the UK and other Western countries only recently.

The official price is £399 in the UK, but you can already find big discounts. Amazon, for example, is selling the V21 5G for just £299, which makes it considerably more attractive and means it’s easier to forgive the less-powerful processor. There’s an official case for £29.99, but you get a transparent silicone case included in the box.

The phone isn’t available in the US or Canada, but you can import one from another country if you really want to get your hands on it.

For alternatives, see our roundup of the best mid-range phones and best budget phones.

When you’re shopping for a mid-range phone, sacrifices are usually inevitable. The stand-out features are the selfie camera and the great screen, but these come at the cost of a faster processor and luxuries such as water resistance and wireless charging.