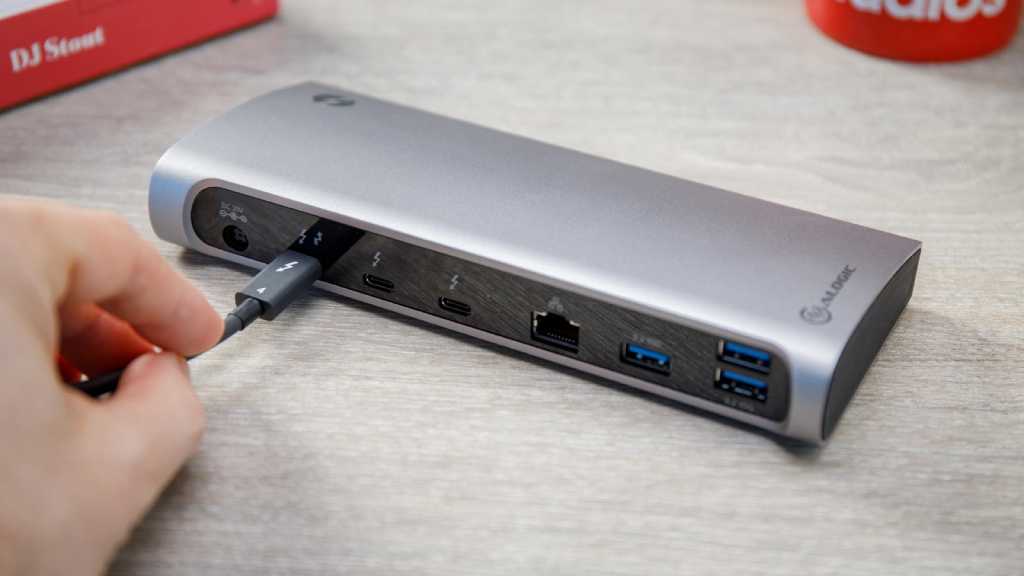 An affordable modern dock with all the ports you’d expect today and impressive 96W laptop charging.

The Alogic Thunderbolt 4 Blaze Docking Station is an 11-port docking station that boasts the latest Thunderbolt 4 connectivity standard and a generous selection of ports.

Buying Thunderbolt 4 now makes sense even if your current laptop is Thunderbolt 3 or USB-C, as it is both the latest technology and backwards compatible.

Using a dock, you add a bunch of useful ports to a laptop with just one cable connection, and at a potential 40Gbps.

The 10 ports plus one upstream Thunderbolt 4 (TB4) port to the laptop should offer most of what you’ll need.

That upstream TB4 port can charge a laptop at an impressive 96W, which is one of the highest-rated charging docks we have tested. The overall power coming into the dock is 135W so there’s plenty available for charging other connected devices, although not enough for all to be charging at maximum capacity if the laptop is drawing full power at the same time.

Gigabit Ethernet means you can dodge flaky Wi-Fi with a strong wired Internet connection to your laptop.

The four USB-A ports should be all you’ll need for connecting older devices such as memory sticks, wired mouse and keyboard, printers and storage devices.

The front-mounted USB-A port is not for data transfer, being merely USB 2.0 that manages just 480MBps, but the three USB-A ports at the back are USB 3.2 and are racy at 10Gbps each.

The lack of a display port might confuse some buyers, but this is the way most docking stations are built these days.

Instead of an HDMI or DisplayPort connector, you use the TB4 ports to attach external displays.

You can connect these directly to a display that has a USB-C port or use an adapter for other monitors; for example, a USB-C-to-HDMI adapter. The only Thunderbolt 4 docking station we’ve seen with actual display ports is the Anker Apex Thunderbolt 4 Dock.

Note that Apple’s M1-based Macs support just one external display, although there are workarounds to connect more than one display to an M1 Mac. The later M1 Pro and M1 Max MacBook Pros support multiple displays.

The card reader is SD rather than microSD, but most of the smaller storage cards come with an adapter to fit the wider SD slot.

Such cards are an excellent way of adding cheap portable storage to your laptop.

The Thunderbolt 4 Blaze is a horizontal dock, with the three downstream, TB4 ports at the back with the three 10Gbps USB-A ports and Gigabit Ethernet.

We’d have preferred the upstream port to be out of the way at the back, but Alogic is not alone in positioning it at the front – most TB4 docks do the same.

It’s a good-looking and well-made dock that won’t disgrace the smartest desktop.

You should factor in the cost of extra display adapters if your monitors don’t have a USB-C port.

There are cheaper Thunderbolt 4 hubs, including Alogic’s own Thunderbolt 4 Blaze Hub, but these focus on the TB4 ports and don’t include Gigabit Ethernet SD or multiple USB-A ports. If all you need is a couple of external displays and a spare TB4/USB port, then a less expensive hub might suffice.

The Alogic Thunderbolt 4 Blaze Docking Station is an affordable modern dock with all the ports you’d expect today and impressive 96W laptop charging. A Thunderbolt 4 hub might be cheaper, but many will appreciate the wired Internet, SD card reader and multiple USB ports.