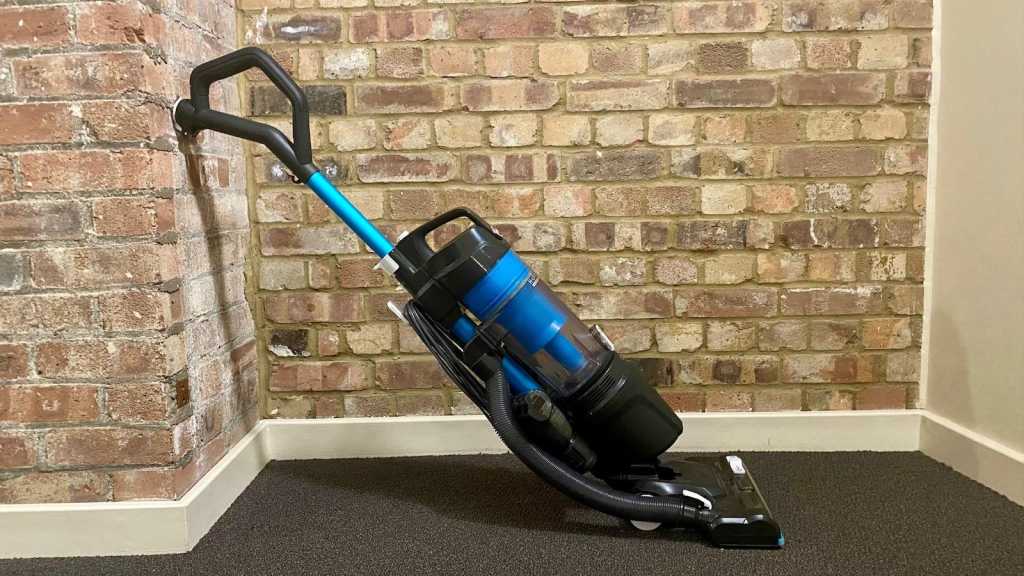 The Upright 300 delivers impressive suction considering its size and weight and has some great design features, all wrapped up in a neat, budget-friendly package.

Not currently available in the US

Since Dyson ‘killed’ corded vacuum cleaners, fewer companies have been investing their corded offerings with the newest technology and designs. The majority of the new floor cleaning appliances we review are cordless and that, in general, is where the innovations are taking place.

Hoover, however, has bucked the trend by giving its corded vacuum cleaners a redesign, with features that bring fresh benefits to a traditional appliance. If you’ve been put off corded cleaners by the fact they’re chunky, clunky and heavy – rather than by the cord itself – the Upright 300 might change your mind.

The Upright 300 has a clear bin and metallic wand, in either red or blue, depending on which colourway you opt for. The handle is nicely designed, with an angled, textured grip that’s pleasant to hold.

It has an industry standard H13 HEPA filter, which is good news for allergy sufferers and those with a dust sensitivity. Bear in mind, though, that as it’s a bagless vacuum cleaner, you’re going to release some of that captured dust back into the air of your home when you empty the bin.

The 1.5 litre bin has an easy-release and easy-empty design. It’s washable too. Just press a single button and it pops off the main vacuum. Another button flips the lid open. (It’s a good idea to make sure you know which button is which before you start using – after my first use of the cleaner, I pressed the wrong one first and emptied it all over the floor.) 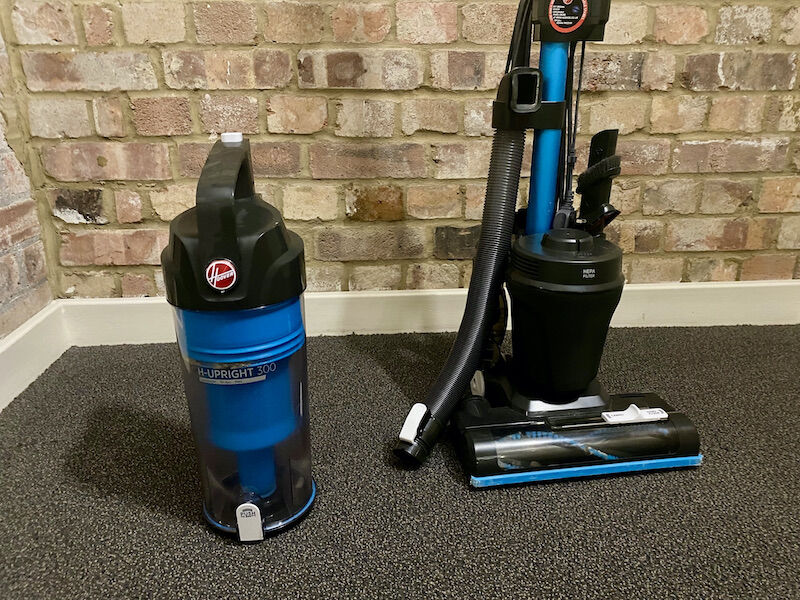 1.5 litres isn’t huge for a corded vacuum cleaner but if you’re used to a stick, it’ll seem that way. Besides, the bin size is one of the ways in which Hoover has kept the weight of the vacuum cleaner down.

While 5kg is heavy compared to a cordless vacuum – Dyson’s V11 weighs about 3kg (6.6lbs) – it’s very light for an upright and, as it bears its own weight while vacuuming, there’s not much more effort involved in using it.

Plus, Hoover has given it 80-degree swivel steering, so it’s much more manoeuvrable than your average upright. It’s no Omni-glide, but it does feel easy to steer around. And, if you lock the cleaning head at 90 degrees, you can tip it back and wheel it from place to place.

If you’ve become used to a stick vacuum, you’ll also enjoy the bonus of being able to pause mid-clean and leave your vac where it is, without finding a spot to wedge it in, or laying it on the floor. 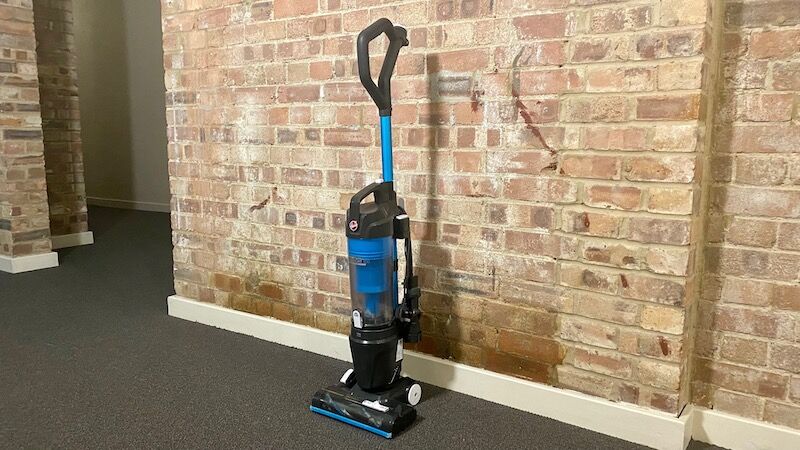 But let’s talk about the cord. Hoover has equipped the Upright 300 with a very long cord: it’s 8.1m. This gives you a lot of leeway when you’re cleaning and means you don’t have to keep swapping from plug point to plug point.

Still, instead of automatic retraction, there’s cord storage on the back of the vacuum cleaner, and you wind it up yourself. Again, I imagine it’s to keep the weight and bulk to a minimum but I didn’t love stooping to wind and unwind it. 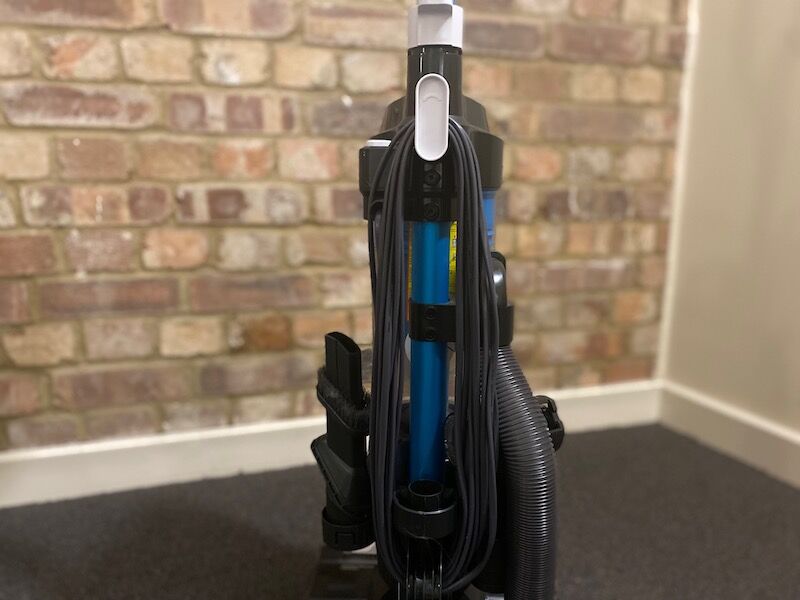 Depending on the model you get, the Upright 300 comes with dusting brush, crevice tool, 3-in-1 tool, long crevice tool and long hose. You may also get the mini turbo brush, which is comes with the Pets model but is now also being given away with the standard Home model. 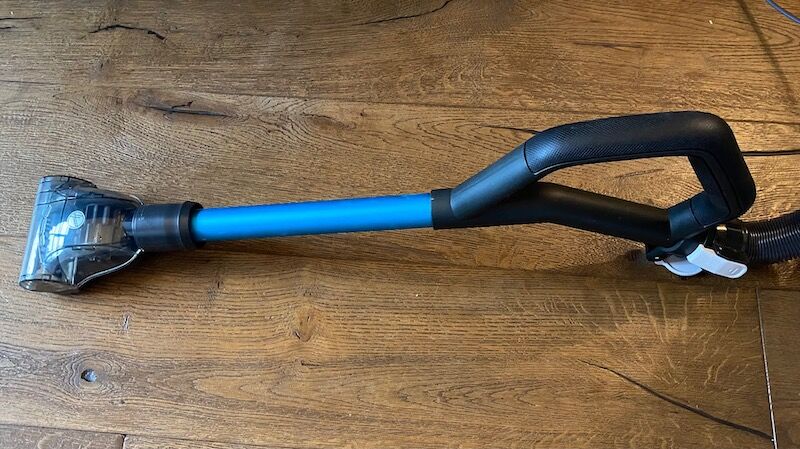 It’s a brilliant tool that works wonders on upholstery if you live with furry friends. Equally, the main cleaning head has a rubber fin that prevents hair, fluff and fur from wrapping too tightly around the roller and makes it easy to remove.

The accessories clip neatly to the body of the vacuum cleaner itself, so you can quickly swap them out, rather than letting them languish in the cupboard. 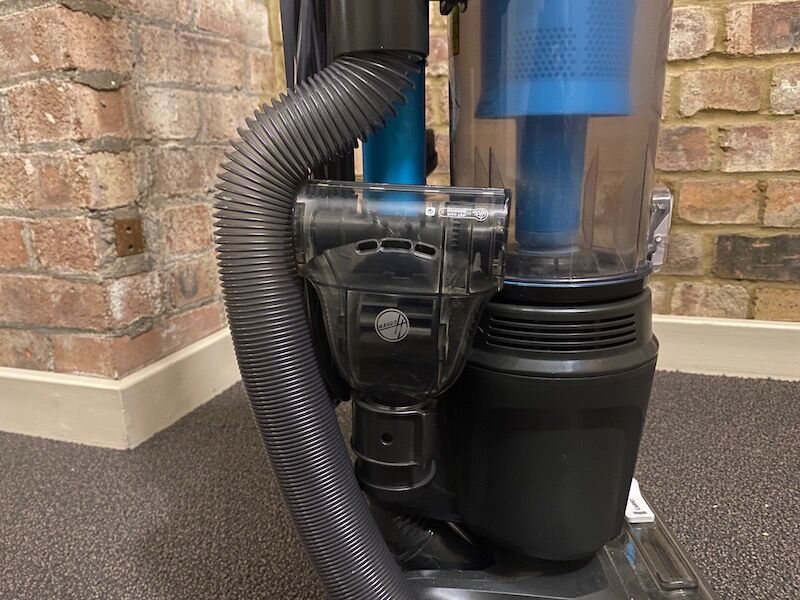 However, the best design feature by far is the way the Upright 300 transforms into its handheld mode, although it does take a minute to do. Still, this is nothing compared to the time you’ll save once you get started.

Slide the wand from the top of the cleaner and attach it to an inbuilt hose by the cleaning head, then attach the accessory of your choice. It gives you a lot of control when cleaning. And, as you can carry the body of the vacuum using the top handle, it makes vacuuming stairs and upholstery a doddle. 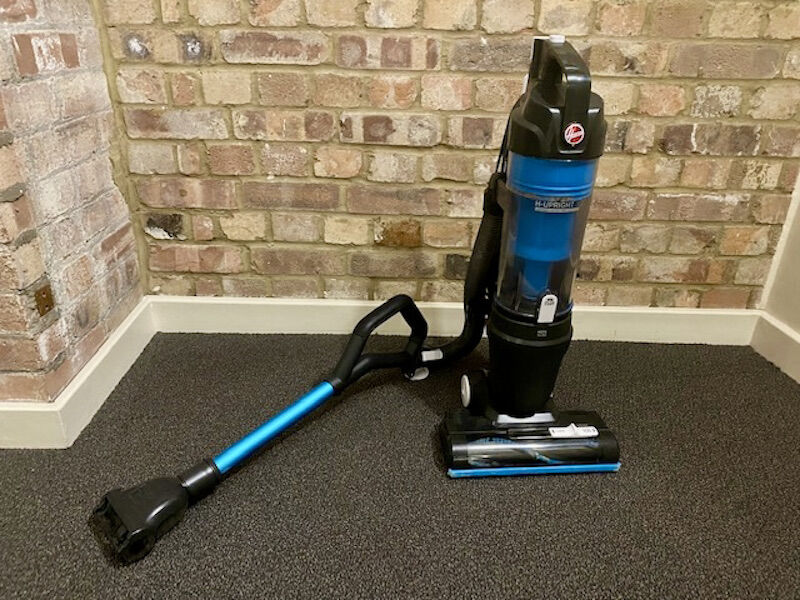 There are plenty of reasons still to opt for a corded cleaner. There’s the suction power, for one. When I first switched on the Upright 300, having been using a stick vacuum for a while, I was really impressed with its power. It’s an 850W appliance and while this doesn’t necessarily translate into great suction, in this case, the Upright 300’s design ensures that very little power is wasted. It also has multi-cyclonic technology, for no loss of suction as the bin fills.

There’s only one problem with the accessories being stored on the body of the vacuum, as well as the cord storage: it bulks out the appliances so that it’s hard to get under furniture. This was the only performance flaw that really bothered me.

The Upright 300 works on both carpet and hard flooring, with a brush bar button and an easy-to-reach slider that you can just move with your foot to increase or decrease the suction.

In the end, there are advantages and disadvantages to a corded cleaner. During the testing period, I enjoyed being able to plug it in and know it would never need recharging mid-clean. However, it took a while to get used to the cord and I caught it under doors often enough to question whether it was worth it.

There are three models in the Hoover Upright 300 range. The Home model is the basic version. It has an RRP of £189 but you can currently buy it from Hoover or Currys PC World for £139. It comes in a metallic blue or red colourway.

The Pets model is different from the Home model in that it also comes with a mini turbo brush worth £20. However, Hoover is now throwing in the turbo brush for free with the standard Upright 300, meaning there’s essentially no difference between these models.

There’s also an XL model, which comes with an additional 2.5m hose and long crevice tool, which you can buy from Robert Dyas for £219.99.

Hoover’s Upright 300 gives you the best of both worlds – that is, if you can deal with the cord. It’s lighter, more manoeuvrable and less bulky than your average, budget-friendly corded vacuum cleaner

If you’re looking for a replacement for your current corded cleaner, we’d recommend the Upright 300. And we think its design features make it well worth a look for even die-hard cordless users.