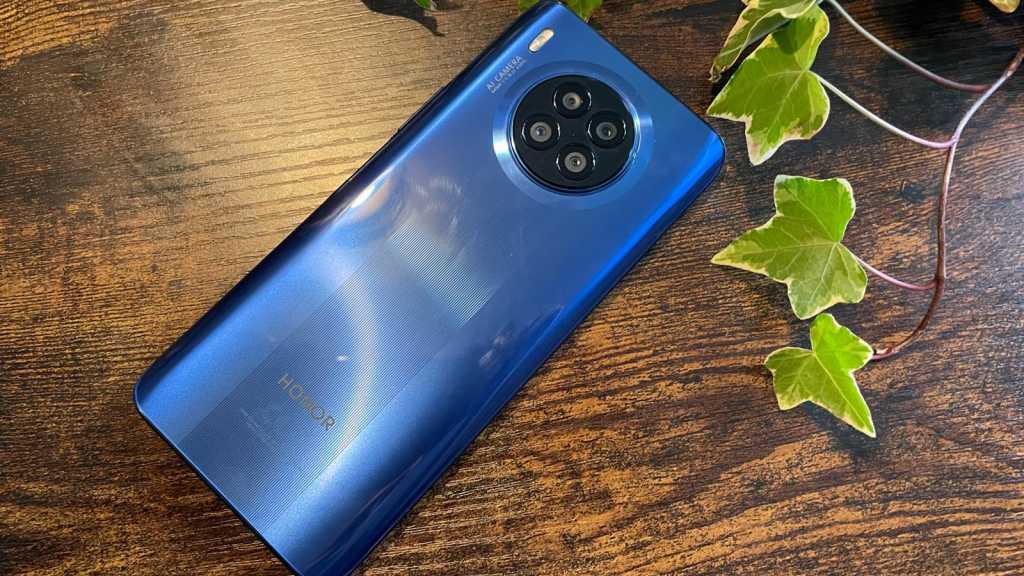 The Honor 50 Lite falls short in storage, lack of waterproofing and 5G it makes up for in its impressive battery life, charging and style.

Honor has managed to make a strong first impression after parting ways with Huawei and the launch of its 50 range. Even if we are yet to really see what the company can do on its own.

The 50 Lite, while similar in many aspects to the flagship Honor 50, has noticeable differences right out of the gate such as its larger – though less impressive – centrally aligned camera ring and its lack of curved OLED display.

But where the 50 Lite has its shortcomings it makes up for with a number of other features that will appeal to any Android user looking for moderate use on a single charge. The 50 Lite’s battery and charging capabilities are particularly noteworthy as is its large display, particularly for the asking price.

The ‘Lite’ suffix on this newer model certainly doesn’t refer to the phone’s weight and slimness.

It comes in moderately heavier (192g) and less slim (8.5mm) than the Honor 50 but with a larger screen this tradeoff makes sense.

It fits comfortably in the hand without a case and these larger dimensions give it a sense of depth without feeling unwieldy. However the 50 Lite’s reflective rear may make some users want to throw on a case if fingerprints are a big concern for them.

Of those designs comes three colours to choose from: Midnight Black, Space Silver and Deep Sea Blue. I was given the Deep Sea Blue model to test which is by far the most distinctive.

Its striped finish running down the centre of the rear body feels quite subdued compared to the options available on the Honor 50. It certainly doesn’t cheapen the overall look of the phone but it doesn’t make it stand out either.

Forgoing the dual camera ring design is the most tangible departure. While most slab phone designs have opted to house their camera ring in the topmost corner the 50 Lite’s is firmly rear and centre which, from a distance, gives it the appearance of a traditional point and shoot.

With a 6.67in screen and narrow bezel, the 50 Lite’s real estate is put to good use. The punch hole camera has also been aligned to the top-left side of the screen which further amplifies this use of space and integrates nicely into the rest of the notification bar.

Even when watching videos in a 16:9 widescreen ratio, the camera sits enough out of view not to take up any of the viewable screen. Anything viewed in a higher aspect ratio however such as 21:9 cinemascope will make the camera noticeable on videos when viewed in full screen, however.

The LCD display makes good use of the DCI-P3 Wide colour gamut and with a 391ppi, this is a big part of what makes the 50 Lite’s battery as efficient as it is. While an OLED display would have been preferable for a screen of this size it’s an understandable omission.

What we would expect these days is a higher refresh rate than the traditional 60Hz. Many rivals have 90- or even 120Hz for a similar or lower price.

The touch sampling rate comes in remarkably high for a phone at this price at 180Hz and should appeal to anyone hoping to use it for gaming on the go. Games that require fast inputs such as PUBG performed reasonably well in that respect but would serve less demanding games just as well.

Quite surprisingly, the 50 Lite also comes with a 3.5mm headphone jack which should be a welcome addition to anyone with decent headphones. The inbuilt speaker however is less impressive.

Audio output is noticeably tinny, having lost some of its lower frequencies as a result of relegating sound output to a single speaker on the bottom right-hand portion of the phone. This will no doubt make the prospect of headphones more appealing for listening to music and podcasts.

There are two models of the 50 Lite to choose from with either 6- or 8GB of ram, both with a storage size of 128GB.

There is no microSD slot included so the internal storage capacity may fall short of people’s requirements, especially if they are transferring apps, photos and other files from a previous handset.

The Honor 50 Lite houses a Snapdragon 662 which can also be found in cheaper and ageing phones such as the Redmi 9 and Moto G9 Power. Note that the mid-range Snapdragon 662 from Qualcomm does not support 5G networks so you will need to look elsewhere if this is important – the Redmi Note 9T, for example.

According to the Geekbench 5 CPU benchmarking test, the 50 Lite performed just marginally below both of the models outlined above and fell short on the GFX tests. Performance is not the phone’s strong point.

The camera ring is the most visually prominent feature on the handset and arguably the Honor 50’s second-biggest selling point.

While the Honor 50 has two separate camera rings, one for its 108Mp main and one for the rest, the 50 Lite houses all four main cameras in a single wheel. The main camera has seen a significant downgrade to 64Mp while the other three cameras have maintained the same specs as the Honor 50.

64Mp cameras have become a standard feature of budget to mid-range smartphones and this is no exception. For the majority of users who are looking for simplicity over versatility, The main camera on offer here can capture a great deal.

It fairs well in many shooting conditions, particularly in low lighting thanks to its dark mode feature, and users will have no issue taking photos with depth thanks to its low aperture. It’s limited to 8x zoom, however, and even before the 4x zoom mark a great deal of picture quality is lost.

The wide-angle lens might offer users plenty of opportunities to take group photos and set up other interesting shots but there is very little reason to use the macro camera.

At only 2Mp, pictures look noisy and the benefits of a macro lens are hard to see. Its presence, along with the depth sensor, feels more like an opportunity for window dressing rather than providing much practical use and the 50 Lite would have greatly benefitted from focusing on their other main cameras.

With a 16Mp front-facing camera, the 50 Lite also offers serviceable selfies for pictures and video calls with an integrated ‘beauty’ feature that can be adjusted with a slider.

Playing with this setting made the appearance of my skin noticeably brighter and ironed out some wrinkles without being too destructive of the image’s quality but whether it made me ‘beautiful’ is up for debate.

The biggest talking point for this phone is unquestionably its impressive battery life. With a 4300mAh battery, it certainly has the capacity for moderate use, although we are used to seeing 4500-5000mAh batteries in phones this large.

According to its marketing materials, the Honor 50 Lite can provide up to seven hours of gaming, 16 hours of web browsing or eight hours of video calls.

This would stand to measure up against my usage. I have gone several days without needing to charge with moderate use and even when gaming, I was particularly impressed with how much charge was left after around two hours.

Even when the 50 Lite does need to charge it does so quickly. Out of the box, the phone comes with a 66W Honor Supercharge adapter and a USB-A to USB-C cable. Honor claims that this can provide up to 40% charge in 10 minutes and after our 30-minute charging test got up to 98%, this seems to align with that.

One carry-over from their previous relationship with Huawei is the Magic UI 4.2 operating system which runs on top of Android 11. However new Honor models offer full support for Google Mobile Services which is a great boon and will offer users greater flexibility and options when setting up the phone to their preferences.

The 50 Lite also comes with an additional suite of pre-installed applications but thankfully bloatware is kept to a minimum.

One notable feature available on the 50 Lite is ebook mode, which adjusts the screen’s colour temperature to the reader’s surroundings. When in use it gives the display a monochrome appearance but it would certainly be useful for anyone who likes to read before bed.

According to Honor’s website the phone is available to purchase in Europe, Latin America and EMEA territories with a promised price in the UK of £249.

You can buy it directly from Honor as well as retailers such as Carphone Warehouse, Currys, Mobiles and Alza.

With that in consideration, the Honor 50 Lite could comfortably be placed as a low-cost smartphone and for anyone looking to use it simply for online browsing, social media and taking quick photos on the go.

At this price, the Honor 50 Lite comes boxed with a 66W charger and USB-C cable, a screen protector and a phone case, which may be of interest to anyone hoping to use the device shortly after purchase at little to no additional cost.

Still, there are a lot of great budget phones around this price such as the Poco X3 Pro and Redmi Note 10 Pro you should consider.

Check out our chart of the best budget phones to see more options.

The 50 Lite has a build quality that could be expected from larger models both at a glance and in hand. It’s difficult to fault Honor for some of the design choices it has made with this build and the few faults it does have can be easy to overlook.

The main camera will provide adequate use for simple, hands-on photography but the increasing trend of quantity over quality when it comes to camera rings has let Honor down in this respect.

While it can be outperformed against competing models at a similar price point, the 50 Lite is a commendable effort to bring Honor’s emphasis on full Android support to its devices since parting from Huawei.

This is helped in part by its large display. Anyone hoping to find a ‘large’ phone at a markedly lower price point will find plenty to like here. Combine this with a battery that can keep up with heavy use most users will immediately reap the benefits straight out of the box.