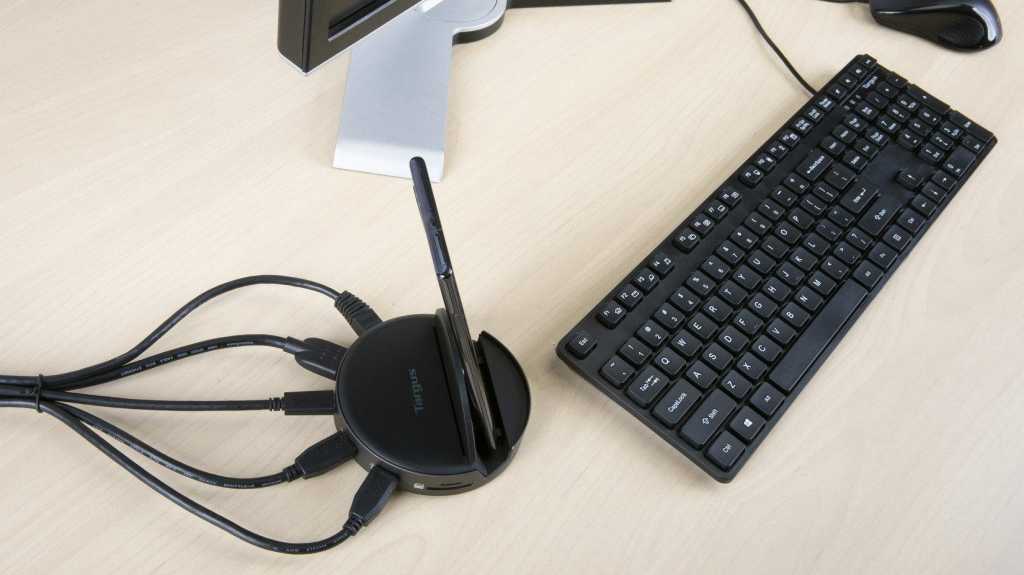 Though it may not have widespread appeal, the Targus Universal USB-C Phone Dock is bursting with connectivity options ideal for those serious about phone-based desktop systems like Samsung DeX or Motorola Ready For.

The Targus Universal USB-C Phone Dock is a handy dock for any USB-C equipped smartphone offering a desktop experience mode, including the popular Samsung DeX and Motorola’s Ready For system. But rather than just offering the desktop experience on-screen, Targus has gone the extra step and equipped the dock with multiple USB ports, SD card readers and even an Ethernet port for a more stable connection.

The question is, is that combination enough to tempt users from the traditional desktop experience? While there are undoubtedly limitations to the mobile-based desktop experience, it could be a viable option for some.

When it comes to the overall design of the universal USB-C phone dock, Targus has taken a simplistic approach.

The puck-shaped dock is small and portable enough to fit even in small spaces – ideal for those with limited desk space – but still manages to offer two viewing angles at 60-degrees and 75-degrees for multi-screen use. The smartphone does have to be in portrait orientation though, due to the wired USB-C connectivity required for use.

Though designed for the Samsung DeX system, the Targus dock is actually compatible with any USB-C alt-mode including Motorola’s Ready For technology on the Moto G100, so the dock was built with a variety of shapes and sizes of smartphone in mind.

But while there are plenty of DeX docks available, Targus’ option goes a step further in the connectivity department, offering a viable alternative to a laptop – or even desktop – for those on the go.

As well as the standard HDMI port that allows you to connect your smartphone to an external monitor at up to 4K@60Hz, you’ll find a USB-C (v3.2) port with PD 3.0 passthrough that can charge your phone at up to 18W while it’s docked and in use, and the two USB-A (v3.2) ports can be used to connect additional accessories like a wired keyboard or mouse if you haven’t got Bluetooth connectivity on your peripherals.

It doesn’t stop there though; there’s both a microSD and SD card reader with support for Samsung KNOX on DeX devices, along with an Ethernet port for fast wired connectivity, a 3.5mm audio jack and the ability to use your phone’s front or rear-facing cameras as a webcam in video conferencing apps – likely a huge jump in quality compared to a standard 720p webcam depending on the smartphone you’re using.

That’s more connectivity than you’ll get from some ultra-light laptops, giving users a viable way to use a smartphone as a desktop device when required without having to compromise on ports and connectivity.

Of course, the Desktop experience is the main focus of the Targus USB-C phone dock – the problem is that the overall experience will depend on the smartphone you’re using.

As mentioned, Targus has worked with Samsung on the dock so it does offer unique features for Samsung devices, like KNOX protection on any SD card plugged into the dock, but you’re free to use any other USB-C-powered desktop experience if you like.

That only really includes Motorola and its competing Ready For system right now, but rumours suggest other manufactures could be working on building the tech into upcoming flagship smartphones.

Even once you’ve decided on an alt-mode to use – I’m using DeX for testing – the experience will still depend on the smartphone you’re using, and the available power.

Once you’ve got all that hooked up, the DeX system is quite impressive. It sports a look not dissimilar to that of Windows 11, with a Start menu, system tray and taskbar, with traditional Android navigation buttons to make using unsupported DeX apps a little easier to use – but more on that in a bit.

There’s an app menu where you can browse from all the installed apps on your smartphone, working in a similar way to that of Chrome OS and macOS, complete with a search bar if you’ve got a specific app in mind. You can also create shortcuts on your desktop for easy access to frequently used apps, just like on a traditional desktop.

When it comes to apps, you’re free to use any app currently installed on your smartphone on the big screen, but not all apps are supported and optimised for the DeX system – games that rely on gyroscope controls, for example, won’t translate well to the DeX desktop experience, and it’s a similar story for swipe-based apps too.

The good news is that most productivity apps – including Microsoft Office, Zoom, Skype, Parallels, Adobe Photoshop Express, Premiere Rush and Chrome – are fully optimised for the system and work perfectly well with a standard keyboard and mouse. Apps that are fully optimised can also be resized on screen, and they’ll play nice with the DeX split-screen capabilities too.

Unsupported apps, on the other hand, offer a fixed window with no size adjustment available – although you can force full-screen via DeX Labs. That’s fine for some, but it might not work perfectly across all apps. There is the workaround of using web apps via Google Chrome for supported applications, but it’s not ideal.

Apps aside, the experience is solid, although this will likely depend on how much power and RAM your smartphone has – the more powerful it is, the more apps you’ll be able to run simultaneously without performance issues.

The Samsung Galaxy S20 FE and its combination of Snapdragon 865 and 8GB of RAM are more than enough for multi-app use in my experience, but those wanting the best possible experience will want to opt for flagship devices like the Exynos 2100/16GB-equipped Samsung Galaxy S21 Ultra.

The benefit of extra USB ports and two SD card readers means you can easily plug in external storage containing presentations or images (ideal for photographers), and the Ethernet connectivity will provide a stable video chat experience too. Though it’ll largely depend on the specific apps and usage, there’s certainly potential for the Targus dock + Samsung DeX system to replace a traditional laptop setup.

The Targus Universal USB-C Phone Dock comes in at a not-insignificant £109.99/$119.99, but if you’ll make use of the connectivity – the USB ports, Ethernet, SD card readers – then it’s a worthy purchase that does come in much cheaper than a laptop.

If you want to test the waters of the DeX system without committing to a dock setup, you could always opt for a more affordable £29.99/$39 Samsung DeX USB-C to HDMI cable.

If you’re tempted, the Targus Universal USB-C Phone Dock is available to buy from Targus directly in the UK and US.

The combination of Targus Universal USB-C Phone Dock and Samsung DeX won’t win over everybody, but for the people that like the idea of being able to run desktop-style apps on the big screen with just a small dock, it’s an intriguing option bursting with connectivity options ideal for work.