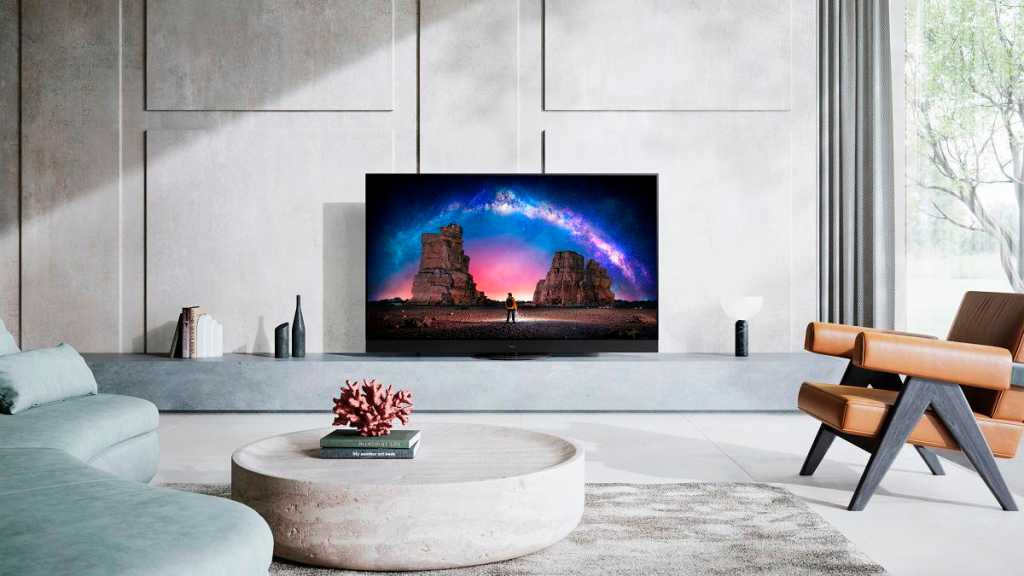 This flagship 4K OLED screen delivers a stunning viewing experience, thanks to Panasonic’s Master HDR OLED Professional Edition panel, and an upgraded Dolby Atmos sound system. It’s even got 120Hz HDMI support for next-gen gamers. We rate it a winner, albeit a pricey one

The JZ2000 is the latest flagship 4H OLED TV from Panasonic. An update of what was an already impressive model (last year’s HZ2000), it features upgraded HDMI support, a revised smart platform and improvements to its Dolby Atmos sound system.

If you’re looking for one of the year’s best TVs, you’re clearly in the right place.

Like its predecessor, the JZ2000 employs the brand’s Master HDR OLED Professional Edition panel, which benefits from proprietary engineering techniques that allow it to offer a high average picture brightness, which is particularly welcome during daylight viewing.

The new seven channel audio system also has all the drivers required to create a fully immersive listening experience. No external sound system like a soundbar is required.

Despite a preponderance of speakers, the JZ2000 doesn’t look over-loaded. It’s relatively slim at 6.9cm, and the frame and bezel almost inconsequential; a forward facing Technics-tuned speaker array sits beneath.

The screen rests on a circular pedestal, capable of spinning to accommodate a variety of viewing positions, which is an unusual and potentially handy feature.

Interestingly, only two of the four HDMI inputs are v2.1 to support High Frame Rate 4K 120Hz (aka 120fps) video playback; eARC is available on input 2 (not that I think you’ll need to use it given the sound system on board), there’s also VRR (Variable Refresh Rate).

Smart connectivity is good. The JZ2000 features the latest v6.0 iteration of Panasonic’s My Home Screen platform, and it’s quite a bit more sophisticated than previous versions.

The core approach is unchanged: users can pin and customise shortcuts to a Home Screen launch bar, but there’s more overt content curation from apps and the Freeview Play tuner.

The streaming choice offers all the main services, including Netflix, Amazon Prime, Britbox, Disney+ and Rakuten TV, while the provision of a Freeview Play tuner ensures all mainstream catch-up services are available, along with a plethora of free to watch box-sets.

We also get a new My Scenery image gallery mode, plus voice control through Google Assistant and Amazon Alexa.

When it comes to picture performance, the JZ2000 is a smooth operator. It doesn’t over-saturate bright primaries in a showy manner (unless you opt for the Dynamic viewing mode), or over-emphasise edge definition and noise, preferring instead to give pictures a glossy, polished look.

Detail is as sharp as a Tom Ford suit, with sublime shadow definition down to deep black, while colour gradation is silken.

I’ll attribute much of this refinement to Panasonic’s new AI-Pro powered HCX Hollywood processor which compares content frame by frame in real-time, referencing it with a baked-in database using genre recognition.

Front of house is that Professional Edition OLED panel, tuned by engineers to give high average panel brightness – even SDR content has dynamic pop – and effective HDR highlights.

Using the Normal viewing mode, I measured HDR peak brightness in a 5% window at more than 900 nits, which translates to excellent specular highlights for street lights, lens flare, bright VFX and so on. With a 10% window, it measures just over 800 nits.

Colour tuning continues to fall under the remit of Hollywood colourist Stefan Sonnenfeld, and looks superb. When it comes to subjective colour accuracy, I would suggest opting for the True Cinema preset.

The JZ2000 also boasts universal HDR playback, with support for Dolby Vision IQ and HDR10+ Adaptive, both of which dynamically adjust HDR content to suit your ambient room lighting conditions. There’s also the standardised cinematic Filmmaker Mode, which here uses Panasonic’s own Intelligent Sensing technology, which does much the same thing.

Normally, TVs only warrant cursory coverage for audio, because they’re generally not very interesting. That’s not the case here as the 360° Soundscape Pro is hugely ambitious and sounds superb.

The addition of side-firing speakers this season proves a significant upgrade. In addition to those upfiring drivers, you get an enhanced sense of stereo width. The soundstage is expansive with high energy blockbusters and live sporting events. The latter can be quite exhilarating, with crowd noises placed up high and around.

If there’s a caveat, at least when compared to a traditional multichannel sound system, it’s that you don’t get a convincing sense of rear movement, a common trait of Dolby Atmos-enabled soundbars too.

Inevitably, there’s little deep bass, but the system does have mid-bass presence, which is where the .1 LFE ends up. Couple that with a significant cumulative power output of 125W and you’ve got an impressive sonic performer.

You can buy it from the likes of John Lewis, Sevenoaks, Richer Sounds and Laptops Direct, although Amazon does not stock this model.

Available in the UK and across Europe, but not in North America or Australia, as Panasonic doesn’t sell consumer screens in either territory, the set sits at the top of Panasonic’s current 4K screen range, outranking its JZ1500 and JZ1000 stablemates in terms of specification.

If you’re looking for more affordable OLED TVs then sets like the LG C1 might appeal. Check our chart of the  best TVs to see what other sets might tempt you.

There’s no doubt that the Panasonic JZ2000 is a spectacular 4K OLED screen that does a sublime job with both sound and vision.

It looks sensational with native 4K content, be it streamed from Netflix or Disney+, or delivered via (compatible) Sky Q or a Virgin V6 box, and it upscales HD remarkably well too. It may not be overtly design-led, like Samsung’s lifestyle range, but it looks slick enough.

I like that Panasonic has further developed its own My Home Screen platform too, rather than offer Android (as it’s doing on its cheaper connected 4K models). The advanced content curation and customisation on offer is pretty cool.

The JZ2000 also warrants a thumbs up for providing some leading-edge HDMI functionality, although given its flag-bearing status having four v2.1 HDMIs rather than two would have been nice. Still, in Game mode, latency is refreshingly low.

The JZ2000 may not be cheap, but overall the TV is a hugely convincing high-end all-in-one home cinema proposition.