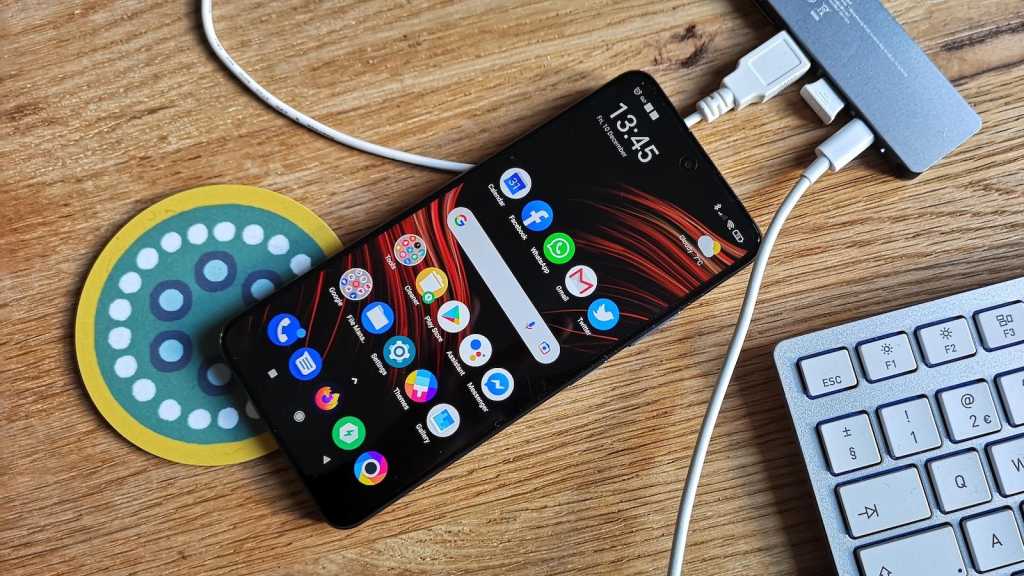 At the cheaper end of the spectrum, budget phones usually compromise on one or more key specifications, but at a glance, the Xiaomi Poco M4 Pro 5G appears to have everything.

As the Poco M4 Pro 5G’s name implies, 5G connectivity is thrown in too, meaning you can enjoy a faster browsing and streaming experience, provided you’ve got a compatible SIM and requisite network coverage.

All in all, the Xiaomi Poco M4 Pro 5G looks like an absolute budget bargain but what’s it actually like to use?

Build quality of the Xiaomi Poco M4 Pro 5G is very good all things considered. You’d expect it to look and feel a lot cheaper. Sure, it’s not as premium as, say, a Pixel 6 Pro, but it does a good impression of a flagship device most of the time.

That said, while it’s thin – it’s a mere 8.75mm thick – the Poco M4 Pro is also pretty tall at 163mm. I had no problem holding or using it in one hand, but I appreciate that I have a pretty big handspan, and so other people might find using the Poco M4 Pro a fumble fest.

The positioning of the fingerprint scanner on the Poco M4 Pro is canny – it’s built into the power key that’s mounted on the right-hand edge – and is set at such a height so that whether you’re left or right-handed, your thumbs and fingers should line up with it naturally for quick unlocking.

If you don’t want to use the scanner, you can use facial recognition to unlock, as well as more conventional password and PIN options.

The Xiaomi Poco M4 Pro 5G is available in three colour options – blue, yellow, and black – and I was sent a ‘black’ one (actually more like dark silver) which catches the light nicely. The camera module grabs your attention, as it’s accentuated by a large black plastic oblong across which the Poco logo is stamped in big letters.

The first time you look at it, you’d be forgiven for thinking that the Xiaomi Poco M4 Pro 5G’s camera has four lenses and a flash, or maybe three lenses, and some kind of sensor, but look more closely and you’ll see that there’s actually just two lenses and a flash.

Two of the four circles in the lens cluster are just there for show, to make the Poco M4 Pro look more advanced than it really is. This is a bit cheeky in my opinion, but I suppose as long as you’re aware that this is a design choice, then no harm’s done. Perhaps it should have been called the Poco M4 Potemkin instead.

A Type-C USB port and a 3.5mm headphone jack sit at the base of the Poco M4 Pro, next to one of the external speakers – a second speaker sits up top. Finally, over on the left-hand side, there’s the SIM and micro SD card tray, which pops out and clips back in easily.

One area you can usually expect budget phones to skimp on is the display, but thankfully, as with its predecessor, the Poco M4 Pro’s display is decent.

It’s a 6.6in display with a 2400×1080 resolution that’s only interrupted by the punch hole camera. The display’s default refresh rate is 60Hz, but you can kick this up to 90Hz, which will eat into the battery a bit, but makes for a noticeable difference when watching video content, or playing games.

The display is an LCD-type, and so brightness and contrast won’t be as high as they would on a phone with an OLED display, but, it’s still serviceable – good enough to comfortably use and read in all but the brightest and sunniest conditions, although the slightly glossy and reflective nature of the display’s covering doesn’t help much here.

The Poco M4 Pro’s stereo speakers are not bad, with music and audio from YouTube and Netflix content sounding crisp but quite flat. If you’re listening to music at your desk and you’re not using headphones, you’ll probably want to connect to a Bluetooth speaker anyway, if you actually want to hear some bass.

The Poco M4 Pro is a budget phone pitched at people who just want a phone to do the basics, and do them well. In terms of performance, that’s pretty much what you get. The model I was sent for testing was the highest-specced 6GB RAM, 128GB storage version.

Browsing the web, checking email and social media feeds feels slick, and even taking photos is snappy, near-instantaneous in some cases. When doing the basics, the Poco M4 Pro feels like a flagship device instead of the budget phone it is.

But try to run some heavy-duty games, and that’s when you run into problems – Asphalt 9: Legends was playable, but noticeably jerky, and despite this phone having a lot of memory, later stages of Civilization Revolution 2 games became sluggish. Low polygon turn-based strategy game Polytopia, however, played very nicely, as good as it does on any flagship phone.

Benchmark scores were in line with expectations, and were pleasingly a cut above the Poco M3 Pro, which couldn’t even run GFXBench during testing – the Poco M4 Pro had no problem.

Scores aren’t quite as good as that of the Xiaomi Poco X3 NFC, last year’s best budget phone, and they’re roughly on par with the likes of the Moto G9 Power, which boasts a bigger battery.

The Poco M4 Pro’s cameras are a mixed bag because while they can produce some good stills, you’re going to need patience and a steady hand. It often struggles to focus on subjects, whether they’re close up or far away and this isn’t something that’s helped by the rudimentary software, either.

On the plus side, colour reproduction is generally good, with colours and tones looking natural, if a little washed out, on the Poco M4 Pro’s display.

There are a lot of options available to you, too. In the standard photo mode, you can zoom up to 10x magnification, and the zoom action is pleasingly smooth and stable.

Whichever way you slice it you’re using digital zoom, which just enlarges whatever’s in the frame, and as you can see from the samples here, particularly in close-ups of the long-haired cat’s face, the closer in you go, the noisier and less detailed things become.

It feels churlish to moan, considering the Poco M4 Pro’s price, but in all honesty, the results are really variable.

As there’s no macro lens, and the autofocus is not great, the Poco M4 Pro isn’t that handy even if you can get up close to your subjects, although if you’re patient enough, you can take some OK snaps of objects a few inches away, like that of the pink rose.

The Poco M4 Pro is generally good at handling a variety of lighting conditions, although really dark areas, as you might expect, look grainy. Night mode produces better results in these scenarios, but it has a tendency to exaggerate colours. Look at the bricks of the Goldsmiths building in the samples – they don’t look that orange in real life.

Other options at your disposal are fun things like panoramic mode, time-lapse, slow-motion video. Standard video can be shot in 720p at 30fps, 1080p at 30fps, and 1080p at 60fps. Results in either resolution and at any frame rate won’t look fantastic unless you’re using a tripod, or you have a steady hand.

Selfies taken with the 16Mp front camera look realistic and are nicely detailed, although, as with a lot of phones, the Poco M4 Pro has a skin smoother filter turned on by default. You can turn this off if you don’t want to look like a Madame Tussauds exhibit, or, if you do, you can turn the softener up even higher, as well as make your eyes look huge and your face smaller.

Xiaomi says that you’ll get enough power “from morning to night, whatever you’re doing” with the Poco M4 Pro and that’s a pretty fair assessment. After most days at work, nine hours at the desk streaming Spotify playlists to a Bluetooth speaker, I’d end the day with around 50-60% left in the tank, which is pretty good going.

Xiaomi also says that you can charge the Poco M4 Pro fully in 59 minutes. In my tests, I wasn’t quite able to replicate that, getting the battery 96% charged from flat after an hour. That’s still very good going, obviously not as quick as the absurdly fast-to-charge Oppo Find X3 Pro, or the Vivo X70 Pro, but then again, the Poco M4 Pro is a considerably cheaper phone.

Running Android 11, with Xiaomi’s MIUI 12.5 customer user interface on top, the Poco M4 Pro is relatively easy to get to grips with, although it’s not quite as elegant or intuitive as stock Android.

There’s a lot of services and games pre-installed, but luckily, you can remove most of them. Some things, like ShareMe, an AirDrop-esque file transfer service, and Themes, a custom wallpaper tool, can’t be uninstalled, which is a tad annoying, if you don’t have any use for them. As bloatware goes, the Poco M4 Pro is hardly the worst offender, but any uninstallable software on any phone always sticks in the craw.

That aside, the software is, for the most part, stable, and the menus are easy to navigate. When you pull down the notifications bar, there’s a little cog in the top right corner which takes you to the Settings menu, which is a nice touch. The menu layouts are easy to get familiar with, and nothing here is really that perplexing.

The Xiaomi Poco M4 Pro 5G is due to go on sale from 20 December 2021 and will be available to buy directly from Poco.

Poco says will be running an ‘early bird’ promo from launch, knocking £20 off of the RRP for both phones from midnight on the 20th until 23:59 on the 22nd.

No price or launch dates for the US and Australia were available at the time of writing.

Check our chart of the best budget phones to see what other options you have for the top phones under £250.

The Xiaomi Poco M4 Pro 5G is a great budget Android phone. It looks good, is easy to use, the battery life is very good indeed, and it’s well priced.

It’ll serve you well as a backup phone, or if you’re the kind of buyer who just wants a cheap phone which does the basics. That said, if Herculean battery performance is more of what you’re after, consider the Moto G9 Power.

Whatever your buying needs are, there’s no getting away from the fact that the cameras are average at best, and if you’re not fussed about aesthetics, you might prefer last year’s Poco X3 NFC, which, while heavy and bulky, still offers great value for money in terms of power and performance.

The Poco M4 Pro is an improvement on the Poco M3 Pro, but only slightly, and so budget-conscious buyers might want to save a bit of cash and grab one of those instead.