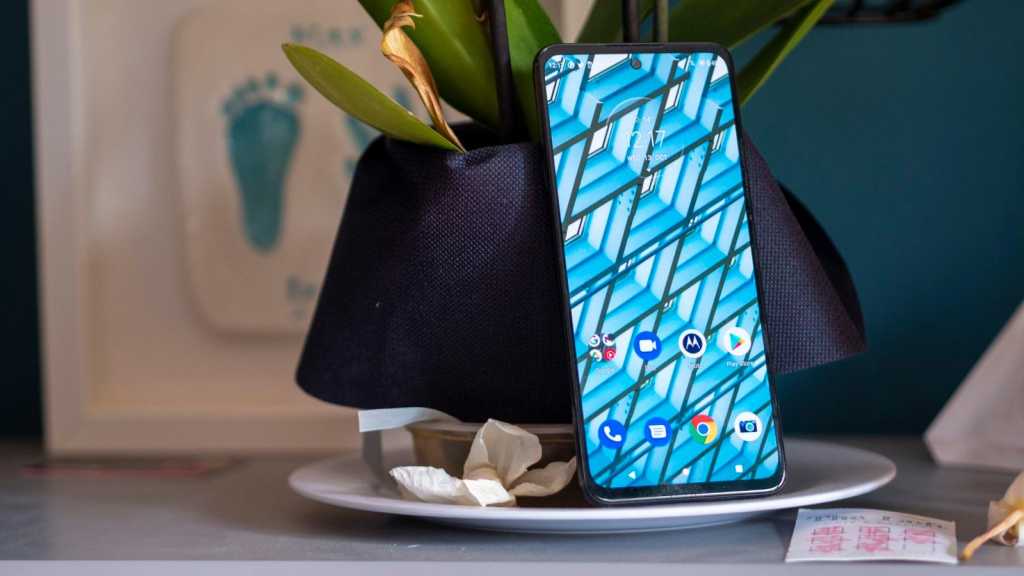 The Moto Edge 20 Lite is a mid-range smartphone with a lot going for it, including a good screen and dependable battery life. With disappointing cameras, average performance and only a mono speaker, however, it doesn’t quite do enough to earn a recommendation.

In 2021 the mid-range smartphone market is heating up. The likes of Xiaomi and Realme have released a slate of handsets that offer premium chipsets, cameras and build quality at increasingly low price points. The Edge series from Motorola is a direct challenge to these competitors, and the 20 Lite is the junior entry in its lineup.

Sporting a 1080p OLED 90Hz screen that offers ‘1 billion’ colours, a 5,000mAh battery, a 108Mp main camera and 5G connectivity, it certainly has enough ‘specs’ appeal to compete at this level, but a smartphone is more than numbers.

Does the Moto Edge 20 Lite do enough to earn its place at the table?

When it comes to the mid-range, any kind of distinctive design on a smartphone is generally the exception rather than the rule. While there are some which go for a more playful look, most tend towards a design that might charitably be described as bland. The Moto fits right in with the latter crowd.

Our ‘Electric Graphite’ model does nothing to get the blood racing, but it will certainly fit easily into most real-life situations, being as comfortable at home as in the office. The only element of flavour beyond a subtle ‘Moto’ blazon on the rear is the camera island, which is large and pronounced.

Build quality is mostly quite good. The handset resists all attempts to twist and bend it, and it has reasonable balance in the hand. As it is hewn from plastic, it will likely take a fall better than most glass ‘n’ metal sandwiches available on the market currently also.

It cannot be denied however that plastic just doesn’t feel quite as premium in the hand, you’ll never confuse this for a more expensive device – it looks exactly what it is worth.

One thing that cannot be overlooked is the sheer size of the device. With a 6.7in display and at 8.25mm thick it definitely isn’t usable one-handed, though at 185g it is a little lighter than some of the similarly-sized competition.

This is one of those devices that really stretches the definition of ‘phone’, almost crossing over into mini-tablet territory. Fans of smaller handsets should steer clear.

There is no part of a smartphone that tends to come with so many marketing tricks as the display. It is, after all, the primary means by which the user interacts with the device, and as such is one of its most important parts.

The Moto Edge 20 Lite comes with an avalanche of these terms. It is OLED, meaning it has deep blacks and vivid colours, it has a fast 90Hz refresh rate which means it runs a little more smoothly than ‘normal’ 60Hz screens and it has a 1080p resolution.

All of these in tandem with the 6.7in size of the screen mean that the Moto is a delight for reading and watching videos.

A slightly more nebulous claim is that the device supports ‘1 billion’ colours – meaning that to the naked eye it should offer slightly better gradation and dynamic range in supported content, but I found that this didn’t really make much of a difference in use.

In general, the panel gets bright enough to combat strong sunlight and dim enough for easy bedtime reading. Its white point tends to be a little warm but this can be adjusted with the built-in colour profiles via the settings menu.

If you are the kind of person who watches a lot of video on their smartphone, or who does a lot of reading, the Moto Edge 20 Lite will serve you well.

It is inevitable with handsets built to hit a specific price point that compromise will be an inherent element of at least part of the user experience.

With the Moto Edge 20 Lite, a big compromise is the chipset used – the Mediatek Dimensity 720 5G. This is a relatively new 7nm fab SoC with an emphasis on efficiency over anything else, that performs very similarly to the likes of the Snapdragon 480 found in newer Nokia devices.

That it is backed up by 8GB of RAM and 128GB of storage is welcome, but the lack of power simply can’t be forgotten.

In day-to-day use you’ll likely never notice an issue, navigating through the UI, browsing the web and more are generally quick and snappy. Problems start to arise with gaming, however, and especially with more demanding titles.

The likes of PUBG and Fortnite were somewhat playable at lower graphics settings and slow frame rates, but those who like to game a lot would be better served with a device offering a bit more oomph. Power users too, who edit video and more on their devices will also find the chipset here to be a bottleneck.

For most people, the Edge 20 Lite offers enough performance to get by, but when the likes of the Poco X3 Pro are offering a lot more power for less money, it does bring the important question of overall value to the fore.

It seems to be the general consensus: the more megapixels it has, the better the smartphone camera it is. From budget phones all the way up to flagship-level devices, the megapixel wars continue to rage on.

The Edge 20 Lite sits in the highly competitive mid-range segment, so of course, it needed a sufficiently eye-catching number in order to stand out. As such its camera supports a whopping (on paper) 108Mp, though as usual, this is a 9-into-1 pixel binning sensor, outputting JPEG files with 12Mp of detail.

This main camera is accompanied by an 8Mp ultrawide sensor with macro-focussing capabilities, a 2MP ‘depth’ camera and a 32Mp selfie snapper. Video recording tops out at 4K 30fps, and a host of creative photo shooting modes are offered.

Starting out, the camera app doesn’t make a great impression. From the main screen, it is slow to open and then slower still in achieving a focus lock. This makes capturing either fleeting moments or fast-moving subjects exceptionally difficult without at least a little luck.

The rest of the app manages to be simultaneously too simplistic and over-complicated. Photo and Video are the sole swiping options available, while frequent picks such as ‘Night Vision’ are buried away in a pile of icons accessible through a burger menu. Overall the camera layout is confusing and a barrier to general use.

It is a shame then that photo and video quality too, aren’t quite up to par with the competition. The 12Mp files produced by the main sensor are decent when lighting conditions are good. Colours in particular have a bit of pop while remaining true to life. The white point is often off-balance however, often leaving images too warm.

Dynamic range, or lack thereof, is a major problem for the sensor, with the auto-HDR failing to balance difficult scenes properly. Sharpening halos can be seen prominently in most images, and are a detriment to detail in foliage particularly.

In low-light things don’t improve. Even with the use of the ‘Night Vision’ mode, which combines several long exposures, the files outputted are low in saturation and detail. Video is noisy and suffers from the same issues of dynamic range and slow focussing.

While it is entirely possible to capture images worth sharing using the Edge 20 Lite, if you particularly value a good smartphone camera there are better options available, and for less money.

Having a big battery used to be a unique selling point in itself. Indeed Motorola has marketed its ‘Power’ branded devices for years around this sole point, that they have large power packs contained within.

In 2021, almost every smartphone in the budget and mid-range now comes with a monster juice pack in tow, or that at least how it seems. The takeaway is that the 5000mAh cell within the Edge 20 Lite might have been something special in the distant past, but in the present, it is the minimum that many might expect.

That is not to cast any aspersions on its running time however, for between its efficient chipset and beefier battery, this is a handset that can keep going and going. On my best day, with constant messaging, email, some reading, playing video and listening to music over Bluetooth I managed 6 hours and 30 minutes of screen time with around 14% left in the tank.

What this means is that for heavy users the Moto will likely always last a full day, and for anyone else this will be a 2-day handset. In our PCMark Work 3.0 benchmark, the phone lasted a decent 11 hours and 31 minutes.

Fast charging is supported, though it isn’t quite as fast as some of the competition is offering. In the box, a 30W charger is provided which managed to top up the 20 Lite by 60% in 30 minutes. It’s respectable, though the slower speed is likely a consequence of the larger battery used.

Since 2013 with the release of the Moto X, Motorola has had a different approach to software than many other Android manufacturers. While the likes of Xiaomi and Samsung take Android and add a boatload of features and tweaks, Motorola’s approach is a little more simple.

It takes stock Android, adds a few usability tweaks and gestures and nothing more. The end result is an uncluttered interface full of genuinely useful touches that is generally a joy to use when compared to the bloated messes offered by some of the competition.

The familiar ‘karate chop’ will activate the torch, while a double twist of the wrist brings up the camera. ‘Ready for’ is a built-in desktop experience that can be used in conjunction with a PC to transfer data and more, while the Battery Care mode will learn your charging habits and optimise your battery to prioritise its health over time.

Perhaps the most useful inclusion is the ‘Peek’ display, which allows the user to meaningfully interact with notifications and more all while the screen is off.

Diving into the settings there are options aplenty for customisation, including adjusting the colour temperature of the screen, the refresh rate and much more. There are no duplicate apps, there is no clutter and moving through the UI is always smooth.

Though it isn’t quite enough to merit the purchase of a handset by itself, the Moto experience is a genuine value add and a model for the competition to follow.

There are lots of competitors at this price point. For £329 the Xiaomi Poco F3 offers a Snapdragon 870 processor, dual speakers and a 120Hz screen, while the Xiaomi Redmi Note 10 Pro sports a 120Hz AMOLED display and a 108MP camera for an asking price of £249.

There is no word yet on whether the Edge 20 Lite will be offered for sale in North America so you may have to opt for the regular Edge 20.

Check out our chart of the best mid-range phones to see more options.

The Moto Edge 20 Lite is a curious smartphone. While it has an attractive list of specifications, the competition completely outclasses it in terms of both performance and value.

Despite this, it has a great screen, strong battery life and a useful user interface that lends it a strong sense of personality.

Though it is let down by its cameras, the lack of stereo speakers and sometimes plodding performance, this is a charming handset to use. Though it won’t be the best pick for anyone in particular, for many people it will be just enough.