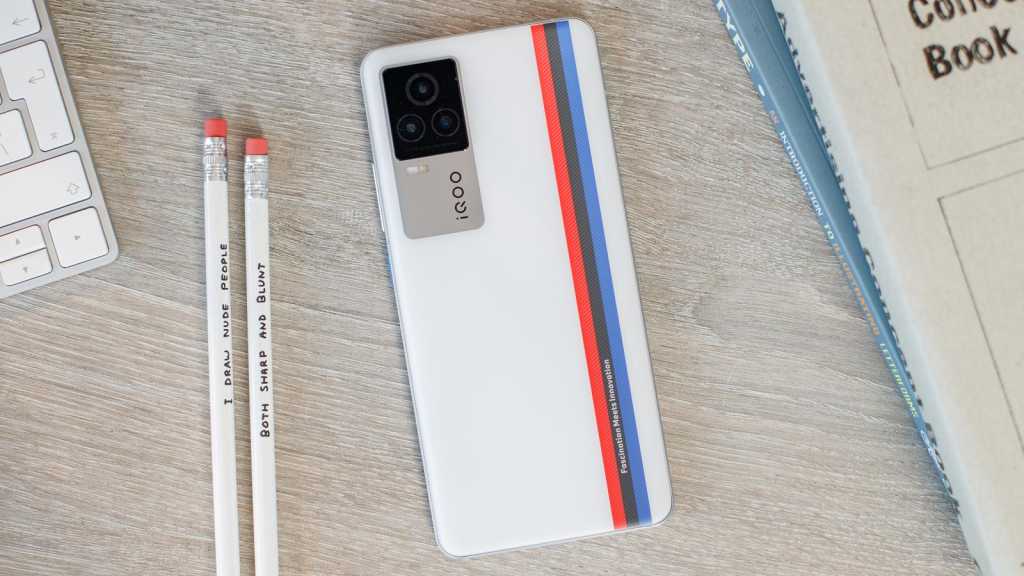 Android gamers should definitely consider the iQoo 7 Legend as their next device. Its visual stylings may not suit every buyer, but it’s hard to argue with the performance and features packed into this international variant of the iQoo 7.

While there used to be a clear gap between a flagship (read: expensive) phone and more perfunctory cheaper options, the middle ground between those is fertile ground for smaller manufacturers to experiment with finding a balance between function and pricing.

Vivo’s 2021 smartphone, the iQoo 7, was no slouch, but its international variant is an impressively stacked device. With a huge display, fast charging, and a series of solid cameras, there’s a little something for everyone – for around £430/US$560 going on the RRP.

While it’s aimed at gamers (and BMW aficionados, seemingly), the iQoo 7 Legend is a great all-rounder with some slight drawbacks.

Love it or hate it, the most eye-catching part of the iQoo 7 Legend’s design is its rear panel. Offering a matte glass finish, it feels great to the touch, but its striped BMW-theming won’t be for everyone.

It’s not as ostentatious as some brand crossovers we’ve seen, and thankfully stops short of slapping the manufacturer’s badge on the device, but it makes a strong argument for a case.

iQoo’s own branding is found below the triple camera setup (more on those later), but the front really is a blank slate, covered by its 6.62in display.

Its surrounding chassis (barely visible from the front) has a volume rocker and power button on the right, and a SIM tray and USB-C charger on the bottom.

There are also dual speakers for stereo output, as well as “hole-punch” selfie camera below the screen and a fingerprint reader within the display itself.

Onto that display, and not only is it big, but it’s beautiful, too. The HDR10+ certified AMOLED panel offers a 120Hz refresh rate, making scrolling through social media, photos, or playing games less like prodding a screen and more like actually interacting with the content on screen.

The screen has a brightness rating of 1300 nits at its peak, while it’s running at a Full HD+ 2040×1080 resolution. While the iQoo 7 Legend is aimed at the mobile gaming market, that cut out is a little tricky to work around in some titles.

Sure, it’s less of an issue in a more turn-based game like Legends of Runeterra, but when you’re playing something like Call of Duty Mobile, it’s easy for it to obscure more of the screen than I’d have liked – especially in the middle of a tense firefight.

The iQoo 7 Legend ships with an impressive 8GB of RAM and 128GB or storage, but my review unit actually arrived with 12GB and 256GB respectively. Whichever you opt for, though, there’s no microSD card slot which is a small shame.

Driving everything is the Snapdragon 888 processor, the same as you’ll find in Xiaomi’s impressive Mi 11.

The Geekbench 5 and GFX scores are impressive enough to surpass Samsung’s Galaxy S21 range, as well as the Mi 11 and OnePlus 9 Pro. Again, though, this is the version with 12GB of RAM we’re testing here.

Benchmarks-wise, it hits similarly, too, but real-world usage held up just as well. At no point did the iQoo 7 Legend feel like it was struggling to keep up, even when multitasking light email and internet use with more demanding games like League of Legends Wild Rift.

When playing Call of Duty Mobile, I was able to hit a consistent 60fps. The phone’s Smart Switch mode wouldn’t let it get higher than that, though, but that could be an optimisation issue on Vivo’s part (or Activision’s). Still, it’s a shame to have a 120Hz display capped in certain games.

In a unique feature, though, the iQoo 7 Legend can add force feedback to mobile games using its vibration motor. While it felt novel at first, it’s perhaps not the ideal use of the 4,000mAh battery.

The iQoo 7 Legend’s camera setup will be familiar for anyone using a higher-end Android phone in recent years.

There’s a 48Mp main snapper, a 13Mp telephoto option with 2x optical zoom, and a 13Mp ultra-wide camera, too. That’s an impressive trio in a phone in this price range, and while it doesn’t rival the Xiaomi Mi 11’s almost comical 108Mp sensor, it still offers plenty of bang for your buck.

The 7 Legend also supports portrait mode, too, and in decent lighting conditions offers good performance with rapid autofocusing, while its ultra-wide camera also works as a macro lens. None of that 2Mp macro rubbish here.

In low light scenarios, the iQoo 7 Legend still holds up admirably. Night mode here is a little less nuanced than in other phones, essentially trying to brighten photos up across the spectrum. It works well, albeit not as impressively as something like Google’s Pixel 5.

The iQoo 7 Legend’s hole-punch camera offers a 16Mp sensor that performs well in most lighting scenarios other than really dark environments.

Video-wise, the iQoo 7 Legend can shoot 1080p at both 30- and 60fps, but also at 4K. Stabilisation is solid, too, meaning it’s ideal for capturing scenes while you’re in motion.

The one thing dragging all of this impressive tech down? The battery, sadly. The iQoo 7 Legend runs off of a 4000mAh battery, which feels lacking in a phone designed in many ways to be pushed to its limits by gamers.

It’ll still last a full day, of course, but after that, it’ll be itching for the charger. In our testing, the PCMark Work 3.0 battery life test ran for a decent 13 hours and 21 minutes and screen on time.

The good news, though, is that the iQoo 7 Legend comes with a 66W charger. That wattage, combined with its small battery, means that in our usual 30-minute charging test from a dead battery it actually charges itself fully.

So while it doesn’t last all that long, it doesn’t take long to top it up.

The iQoo 7 Legend runs on Funtouch OS 11.1, which is based on Android 11. It’s not too far from the stock Android experience, albeit with a visual style that’s a little closer to iOS. Expect rounded buttons and a more neutral colour palette but with the usual customisation of Android.

As far as Android wraps go, it’s one of the better-looking ones, but sadly it does include a fair amount of bloat. Between preinstalled social media and recommended apps, expect to spend some time clearing your home screen early on.

The iQoo 7 Legend is available globally, but its rollout has been slow. At present, it’s tough to find in many markets, with Indian customers being those lucky enough to snap one up at present.

At the time of writing, the iQoo official store and Amazon India have up to ₹5,000 off those RRPs.

Check out our charts for the best mid-range phones and best gaming phones for more options.

The iQoo 7 Legend is an impressively powerful device, that packs some impressive features like incredibly fast charging and a 120Hz display for a decent price. The downside of that is that Vivo is still rolling the device out worldwide, with no US, UK or Europe date in sight.

Still, if you’re looking for a powerful gaming device with a solid set of cameras and a gorgeous display, it’s hard to complain about the bang for your buck here – just remember to keep the charger with you.