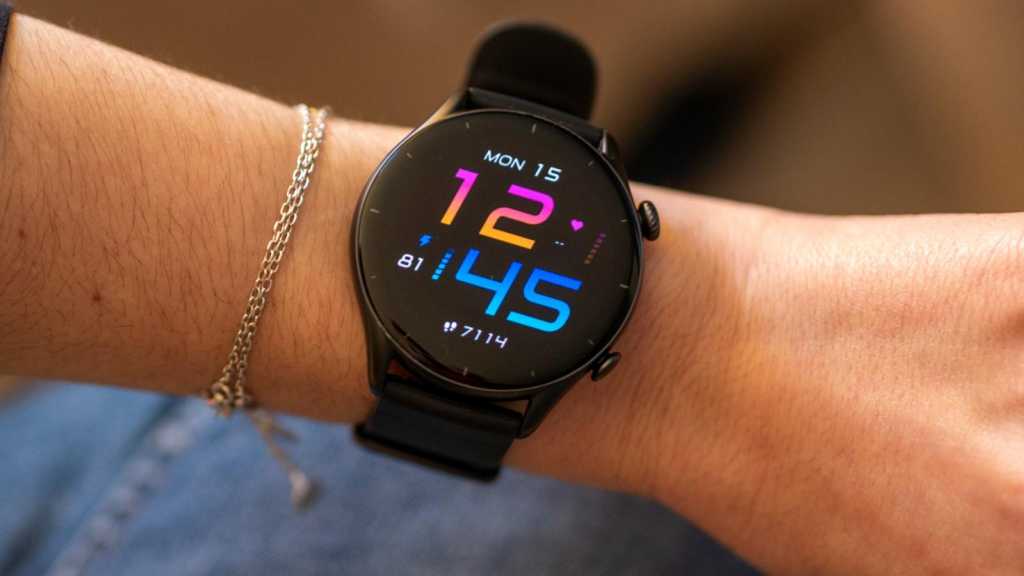 The Amazfit GTR 3 is an attractive smartwatch offering a host of head-turning features for its price, but minor on-watch bugs and a poorly laid-out mobile app stop it from being an instant recommendation

In 2021 we find the smartwatch market fragmented and in a state of flux. Apple rules the roost with its eponymous Watch, while Google, Samsung and others are regrouping and pooling their efforts in a bid to stay relevant. And within all this, Chinese manufacturer Amazfit is attempting to carve its own niche.

The GTR 3 is its latest effort, sitting just below the slightly fancier GTR 3 Pro version; in terms of premium credentials. Sporting multiple health tracking options, an OLED screen, more than two weeks of claimed battery life and a new custom OS to boot, it has plenty of features to capture the eye, but in the midst of some strong competition, does it do enough to deserve your hard-earned pennies?

Smartwatch design tends to come in two flavours. There are those who prefer a more angular, squared-off design, that evokes a “watch of the future”, leaving the trappings of an analogue age behind. Then there are those who like quite the opposite; accepting nothing less than something akin to a classic Swiss timepiece.

With the GTR 3, Amazfit has tried to reach a compromise between these differing visions and has mostly succeeded in doing so.

Upon first holding the watch, its weight sets it apart. At 49 grams, this is a light timepiece. It’s constructed of aluminium, however, this is difficult to tell, given the matte coating applied on top, which feels pleasant but definitely more reminiscent of plastic.

The front of the device is dominated by a circular face (the ‘R’ in GTR stands for ‘Round’), the back houses an assortment of fitness sensors and the right side sports a rotating crown, and programmable hardware key.

For those who like to accessorise their watches, the GTR 3 uses standardised swappable 22mm bands, making finding alternatives an easy job. Those who like different casing colour options will be disappointed, however, as you only have Moonlight Grey or Thunder Black to choose from.

The watch feels solid and robust while also looking and feeling worth the price of entry. Water resistance is offered at up to five atmospheres (5 ATM), meaning that this will stand up to a shower or a few laps in the pool, if not snorkelling. Only one size is available, which comfortably worked across a number of wrist sizes in general use. During testing most who tried on the GTR 3 remarked that the watch felt comfortable to wear.

Ultimately, this is a watch that’s at home in most situations. It’s unobtrusive enough to be worn throughout the day, tough enough to withstand a workout and sufficiently distinctive to stand out, in a good way. Amazfit has been constructing smartwatches for some time now, and that experience is reflected in the fit and finish of the GTR 3.

A smartwatch, of course, lives and dies by the quality of its display. And while on its cheaper units – such as the ‘Bip’ line – Amazfit opts for TFT LCD tech, with the GTR 3, it has gone all-out on an AMOLED panel.

At 1.39in, it is quite a big panel for a smartwatch, with the display appearing even larger, due to the relatively thin bezels around the face. It’s large enough to display a wide assortment of information, which is only aided by the selection of swappable watch faces on offer. We found this particularly useful when receiving notifications on the device, with even longer text messages proving easy to read.

That this is the case is thanks, at least in part, to the reported 326ppi pixel density, which is around that ‘Retina’ threshold where Apple claims the human eye can no longer discern individual pixels.

As the display uses OLED tech, blacks are true and colours are vivid, and the display comes with an ‘Always On’ option too. While this does have a tendency to eat through battery life, it also allows the GTR 3 to serve as a ‘real’ watch; displaying the time, all the time.

No claims are made by Amazfit with regards to the brightness of the panel used, however, we found that the watch contended well with difficult bright autumnal sunlight. With the heat of the summer sun, the picture may differ, of course.

Amazfit also doesn’t offer any specification for the protective glass covering the display, which means that there isn’t any information regarding its scratch or impact resistance. Those with rougher lifestyles will likely want to consider a screen protector, while, for the rest, the general proviso of keeping the watch out of harm’s way will apply.

The crucial differences between a watch and a smartwatch are the elements that make the latter ‘smart’. Beyond heart rate sensors and OLED displays, what this means is software that allows apps to be downloaded, notifications to be seen and more. Every player in the market has its own approach to software; with some going so far as to offer their own operating systems.

This is what Amazfit has done with the GTR 3; to mostly middling results. To start – from a purely aesthetic perspective – the UI is generally pleasant to use. A swipe up from the bottom will bring up notifications, a swipe down will show an iOS-esque control centre, with quick toggles and swiping from the right will show the weather, exercise information and more.

Long-pressing the crown will summon Alexa, tapping it will bring up a scrollable menu and, by default, the programmable lower button will begin logging a workout session. It’s mostly fuss-free, though there is a pronounced emphasis on swipes. Given that the display is quite small to serve as the primary means of interaction, this can make quick gestures more complicated than they need to be. A quirk that’s only exacerbated by the generally laid-back pace at which the device operates; though this isn’t slow as such, everything takes a beat longer than you might expect coming from an Apple Watch, for example.

Where things really begin to fall down, however, is with the smartphone companion app: an essential part of the overall experience. To say that it is complicated to use only scratches the surface. The Amazfit GTR 3 – mostly to its credit – is a highly customisable device, but the menus to make these customisations are obscure, arcane and often unintuitive.

An example would be changing the date display from the default MM/DD configuration to the international standard DD/MM option. Despite changing this on the watch, in the app, restarting, resetting, changing watch faces and more proved impossible to do. This was in-between the periods where the watch would simply restart for no discernable reason.

Amazfit did provide several app updates across the course of the review period, some of which did solve issues. However, as others fell away, new entrants appeared; showing a potential lack of QA testing of these new updates.

Regardless, the app and its settings are tough to use, with notifications, in particular, being patchy from Android and iOS devices, during general use. Especially in the case of iOS, several functions would cease completely once the app was forced out of memory on the accompanying iPhone; which is a shame for a device marketed as being compatible with Apple products.

The Alexa integration is mostly a win, however, providing an option for easy note-taking and reminder-setting, while the in-built music remote app is mostly useless.

One of the main attractions of an activity tracker – to the right kind of person – is the opportunity to ‘gamify’ exercise. That is, of course, to track workouts using data from the various sensors that a smartwatch can offer and then using said data allow you to compete with yourself and outdo your daily workout targets.

The Amazfit GTR 3 is not a fitness device first and foremost. While it offers the option to track heart rate, blood oxygen, ‘stress levels’ and breathing rate, the sensors used provide data best used for illustrative purposes; they’re not especially accurate.

Over 150 sports modes are offered – covering a manner of obscure activities – and it is easy to just begin a workout and get going without too much thought. Some more involved stats are offered for those who like to take a more active overview of their exercise, however.

Chief among these is Personal Activity Intelligence (PAI), which purports to review activity over a seven-day period, awarding a score based on exercise done. The user is encouraged to maintain a weekly score above 100 in order to improve their fitness.

Despite this being a slightly dubious metric, awarding a weekly score and tips towards achieving it proved motivating enough to keep tracking exercise and activity; as opposed to specifically working towards improving my weekly PAI score.

Accessing this information is hamstrung slightly by the cryptic nature of the Zepp app interface, but the ability to integrate with third-party services, such as Apple Fitness, Google Fit, Strava and more alleviates this somewhat.

Smartwatch battery life is an interesting field, as the longevity of these powerful devices with tiny power cells depends entirely on how ‘smart’ they are required to be in general usage.

Amazfit claims up to 21 days of battery life for the GTR 3, which is certainly achievable, but only with most of the ‘smart’ functionality turned off. This means no always-on display, fewer notifications, less frequent health monitoring and more.

Once these are in use, that figure drops by just over 60%. We managed to achieve around a week of battery life with a blended use pattern, paired with the lift-to-wake display option.

Battery life is clearly aided by the watch’s custom OS, however, this limits integration with third-party services and has less functionality than the likes of Apple’s WatchOS or Google’s Wear OS. Devices running on those platforms might have slightly worse battery life, but they can achieve a lot more while in use.

When power is depleted, the watch recharges with an included magnetic charging cradle.

Its closest competitor is its fancier brother – the Amazfit GTR 3 Pro – which retails for £179.99/US$229.99. As well as offering all the same mod-cons as the GTR 3, it also includes a speaker and the ability to make phone calls via Bluetooth.

Huawei’s new Watch GT 3 also offers a similar recipe of style and performance for a little more cash but comes in a wider variety of finishes and styles.

Check out our charts for the best smartwatches and best fitness trackers for more options.

The Amazfit GTR 3 is an ambitious smartwatch that tries hard to feel worth more than its price tag. It sports a nice premium design and feels sturdy, while also offering easily swappable straps. The big bright screen makes interacting with longer messages easy to do, while the updated operating system mostly makes sense in general use.

That same operating system is prone to frequent bugs, however, and the Zepp companion app is an arcane collection of settings that takes a lot of investment to properly understand. Notifications don’t always appear, and simple options, like changing the date format, are difficult to achieve.

In spite of its troubling software experience, though, the GTR 3 is a highly likeable wearable with a lot to offer the right kind of owner. Those looking to make a purchase primarily to track their exercise would be better suited with a dedicated fitness band, while iPhone users (budget permitting) will find more use from an Apple Watch. For the rest, this is a decent all-rounder.