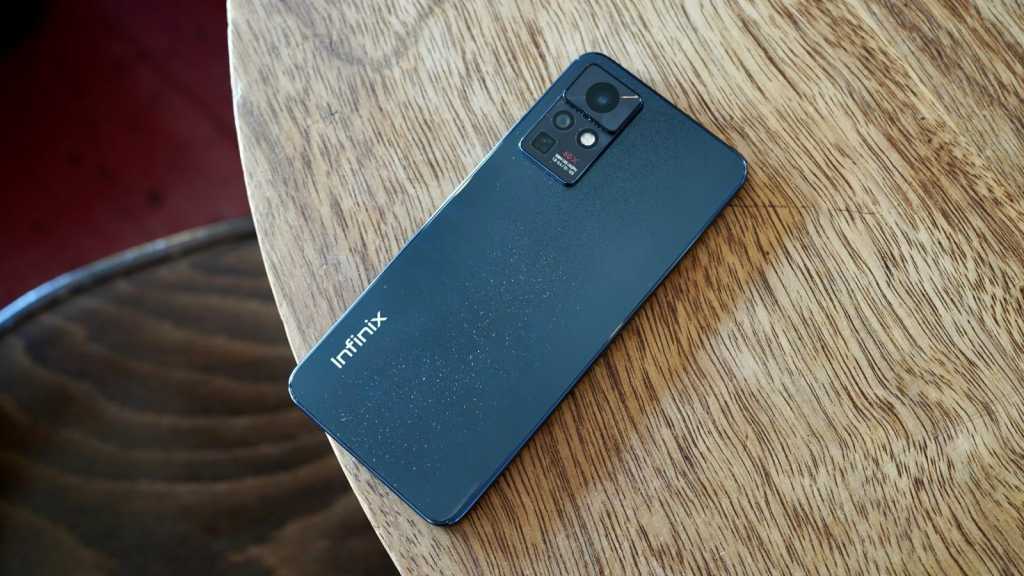 A strong camera system and a fine display make for a good start but the Infinix Zero X Pro is held back against rivals due to its questionable stamina, terrible fingerprint sensor, and cluttered software.

Infinix is one of the lesser-known smartphone brands out there, at least here in the West. But the Hong Kong-based manufacturer has actually been in the game since 2013.

The Infinix Zero X Pro could well mark the company’s most advanced smartphone yet, thanks to an eye-catching 108Mp camera set-up, impressively speedy charging, and a fluid 120Hz AMOLED display.

With global pricing starting from US$319 (approximately £230/€270), it’s clearly looking to take the fight to the Pocos and Redmis of this world. Unfortunately, lingering hardware and software quirks hamper the Infinix Zero X Pro’s chances of really cutting through.

Despite its ‘Pro’ name, there’s no doubting that the Infinix Zero X Pro is an affordable phone when you get hold of it. From its all-plastic construction to the off-puttingly reflective selfie camera, there’s nothing much here that screams ‘premium’.

That even extends to the rear glass-effect panel, which has been finished with an odd glittering effect that sparkles when held at an angle. In the Nebula Black of our test handset, it put me in mind of a kitchen worktop. It certainly helps this otherwise plain phone stand out, but it also looks a little cheap.

The shiny plastic rim of the phone has been partially flattened out. We’re not talking iPhone 13 levels of abruptness here, but it’s certainly more defined than your average blandly rounded budget phone.

There’s just a single speaker on the bottom edge of the phone, right alongside the USB-C port and a 3.5mm jack. All of which is again fairly typical of cheaper phones, though both the Redmi Note 10 Pro and the Poco X3 Pro have stereo speakers.

You don’t get any form of official waterproof rating here, though that would have been a surprising inclusion at the price.

Also, like the Note 10 Pro, you get a speedy 120Hz refresh rate. You’ll get an auto-switch refresh rate by default, but it only takes a brief trip to the settings menu to force 120Hz on all the time.

In a similar way, there’s an always-on display function here, but again it’s off by default.

Infinix has gone with an in-display fingerprint sensor, but I wish it hadn’t. It’s one of the flakiest I’ve used in recent times, with a frequent fail rate on both of my thumbs, even after wiping and retrying the enrolment process.

The Infinix Zero X Pro isn’t a ‘Pro’ performer, but it’s a solid runner, despite a slightly convoluted set-up. It comes with either 128GB or 256GB of internal storage, with a microSDXC slot as an added bonus.

We’ve seen the MediaTek Helio G95 before in the Realme 8, the Realme 7, and the Xiaomi Redmi Note 10S. Not only are these phones all in the affordable category, one of them launched back in 2020.

This is a chip that’s been around the block, built using an old 12nm process. There are a couple of quirks as a result, not least of which is a complete lack of 5G support.

On the positive side, one thing this chip is known for is strong GPU performance. Infinix has also employed a secondary ‘Boost Intelligent Display Chip’ which pushes past the G95’s 90Hz display limit, and coupled with a 240Hz touch sampling rate, the phone has decent gaming potential.

Sure enough, COD Mobile remains perfectly playable even at maxed-out settings. Across our various CPU and GPU benchmark tests, the Infinix Zero X Pro is roughly equal to the Xiaomi Poco X3 NFC with its Snapdragon 732.

Infinix has outfitted the Zero X Pro with a solid triple-camera system, and there’s a commendable lack of the usual ‘depth’ and ‘macro’ sensor bloat here.

There’s no doubting which camera is the star here, though. The main camera packs a 108Mp, f/1.8 wide sensor with both PDAF (phase detection autofocus) and OIS (optical image stabilisation). This would appear to be the Samsung ISOCELL HM2 that we’ve seen perform so well in the Realme 8 Pro and the Redmi Note 10 Pro.

We’re looking at a strong entry-level to mid-range performer, with relatively accurate colours and plenty of detail. Dynamic range is solid, though I did spot a few blown out clouds on some of my city shots.

The weak point here is the ultra-wide sensor. The shift in tone and quality is quite jarring, from the cool, crisp clarity of the main sensor to a soft, slightly sickly green hue.

Rather impressively, Infinix has managed to include a 5x periscope telephoto lens here. This is something typically associated with much more expensive phones, often not even mid-range.

What’s even more surprising is that the results aren’t terrible. The 5x shots I captured looked quite sharp – at least compared to the cropped results from other cheap phones – and the tone wasn’t a million miles away from that of the main sensor. I wouldn’t recommend zooming in too much further though, despite Infinix’s bold ’60x’ claims.

Night mode is pretty effectively handled here, for a phone of this price. You can thank that relatively large sensor, in association with OIS, which the Redmi Note 10 Pro notably lacks.

The Infinix Zero X Pro also has an intriguing Moon Shot mode that claims to use algorithmic wizardry (achieved in association with the Royal Observatory no less) to achieve clear snaps of Earth’s famous satellite.

It’s certainly an improvement on what most phone cameras can achieve by default, but of the seven or eight shots I took of the moon on one particularly clear night, only two were anywhere near usable. The rest were blurry or blown out, and you’ll also need to prop yourself, or ideally mount the phone to a fixed position, given the need to employ that periscope lens.

The Infinix Zero X Pro has a reasonably healthy 4500mAh battery, but it doesn’t result in great stamina when things get tough.

Could this bad battery performance be down to that 12nm Helio G95? Not entirely – the Realme 8 scored 10:36, while the Xiaomi Redmi Note 10S scored 13:19, both using the same chip.

I can only assume that it’s the use of that secondary ‘Boost Intelligent Display Chip’ and related tinkering that’s hitting the mixed-use battery life so hard.

Thankfully, the recharging process is pretty swift, courtesy of a bundled 45W charger. Infinix claims you can get 40% in 15 min with this, which tallies with my experience. I was able to get the phone to 80% in 30 minutes.

Most cheaper Android phones of this sort stumble (if not fall flat on their face) over software and the Infinix Zero X Pro doesn’t exactly rip up the form book on this front.

It runs on Android 11 with a custom UI known as XOS 7.6. The latter is reasonably smooth and legible, but ultimately I came back to the same old thought: why couldn’t they just leave Android alone?

There’s a custom widget and news feed screen to the left of the main home screen, which is actually quite tasteful as such things go. But I’d still much rather just have my Google Feed back.

Perhaps you need to know how many steps you’ve done and how much of the phone’s RAM is being used at any given moment, but I for one don’t. It would be nice to at least be given the option to swap these widgets out for a more useful alternative.

It’s mostly a host of little things that grate here, though, such as the need to install Google Calendar, or the weirdly phrased ‘Funs & Casuals’ [sic] folder that appeared when I dragged two game icons together, or the fact that the battery section of the settings menu has been renamed Power Marathon.

There’s a job load of bloatware too, from the Palm Store app store to the Hi Browser web browser, through to the Boomplay free music app. It all just feels so unnecessary and tiresome.

One cool addition is the Freezer folder. Drag any app into this on the home screen, and it’ll stop using up system resources in the background. It’s basically a fancy way to disable apps you don’t use very often, but it feels intuitive and natural.

As that pricing suggests, we don’t have details on a UK rollout at the time of writing. We’ll update the review as and when we do, but be aware that Infinix representatives have stated that pricing could vary significantly by region.

In fact, it doesn’t appear to be on sale anywhere online at the time of writing. Not from the official store (the buy button is to find physical stores) or retailers like AliExpress, Geekbuying and Gearbest which typically stock just about every phone under the sun.

Given the pricing details that have been provided, it would appear to be going up against the likes of the Poco X3 Pro and the Redmi Note 10 Pro, which is some seriously stiff competition.

Check our list of the best budget phones and best mid-range phones to see all the competition.

The Infinix Zero X Pro is another solid ‘premium affordable’ handset in the mode of the Redmi Note 10 Pro and the Poco X3 Pro, with a fine 120Hz AMOLED display and a strong 108Mp camera.

Almost unique to this area of the market is a periscope telephoto lens that actually earns its place on the back of the phone. I’m not so convinced by the accompanying Moon Shot mode, but that’s pretty much irrelevant in daily (and even nightly) shooting.

Where the phone falls short is when it comes to reliability, chiefly in the form of battery life under more intensive conditions (even if charging is pretty fast), and a truly terrible fingerprint sensor. Elsewhere, Infinix’s software is just too overbearing for our stomachs.

There’s promise here for future models, but Infinix needs to nail down those fine details and streamline its software if it’s to mix it with the budget big boys.