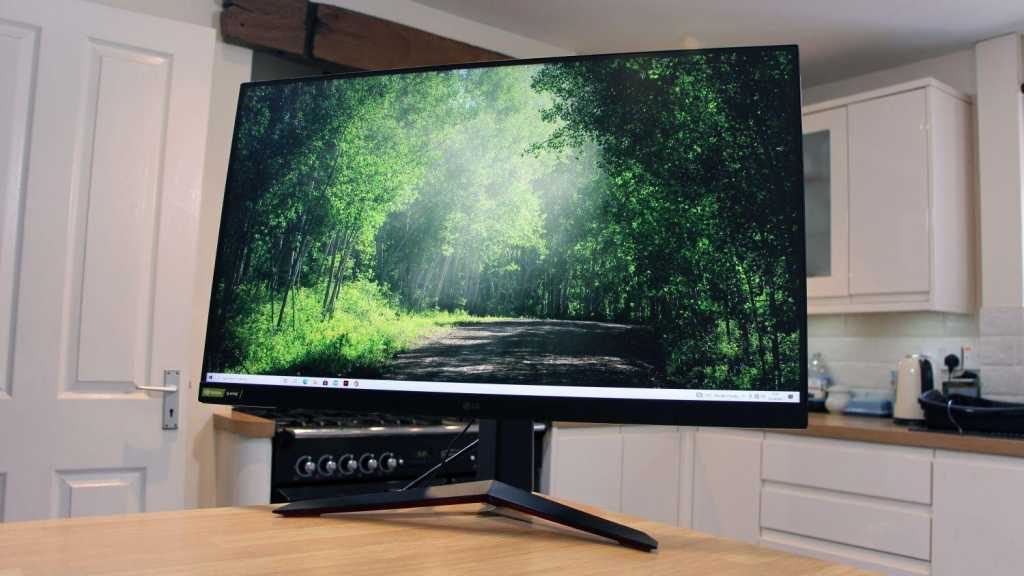 The UltraGear 32GP850-B is easy to recommend. The rock-solid resolution, ease of use, great colours, and smooth refresh rate performance make it a great option for all kinds of mainstream games. Contrast and lack of 4K are minor points.

It’s always tempting to shell out for a panel like the LG UltraGear 32GP850-B if you want a big-screen PC gaming experience: its 32in diagonal is big enough to dominate all but the biggest desks, and the LG pairs its impressive size with some high-end specifications in other areas.

The 32GP850-B will set you back £449 in the UK and $476 in the US, though, and that’s money that you could also spend on a gaming display with different and potentially more useful attributes. Let’s see if the UltraGear 32GP850-B is the best gaming monitor for you.

LG’s panel makes a big first impression – a 32in display with a 16:9 aspect ratio looks huge on most desks, and the UltraGear has slim bezels and a dramatic, flared stand with red accents. At the rear, the screen has a huge red ring and the firm’s bold gaming logo.

The 32GP850-B has good build quality too. It’s made entirely from plastic, and the panel is reasonably robust – certainly strong enough to find a home on your desk. That said, it’s not free of build issues: the joystick is a bit too flimsy, and the panel wobbles too much if it’s accidentally knocked.

LG’s panel has 110mm of height adjustment and 20 degrees of tilt movement. It also supports 100mm VESA mounts and portrait mode. The only movement missing is swivelling.

That’s a good start, and the LG is easy to put together. The base and stand use tool-free mechanisms, and the stand can be removed with a single button. The stand also has a loop for cable-tidying, although the ability to route cables through the stand itself would be better.

The display has two HDMI 2.0 ports that are limited to 144Hz alongside one DisplayPort 1.4 connection and two USB 3.2 Gen 1 connectors. The ports are all positioned on the back of the screen and face outwards – so they’re far easier to reach than the downward-facing ports on other screens.

LG’s on-screen display menu is attractive and responsive, and it’s easily navigable thanks to a joystick in the middle of the bottom bezel. It’s well-organised, too – every option is where you’d expect.

LG’s specification ticks most of the boxes required for mainstream gaming. It’s an IPS panel with 10-bit colour, and its resolution of 2560 x 1440 delivers a pixel density of 92ppi – high enough to keep things crisp but modest enough to remain playable on a wide range of graphics cards.

The UltraGear 32GP850-B has a default refresh rate of 165Hz that works with AMD FreeSync and Nvidia G-Sync. It’s got a minor overclock to 180Hz, and there’s a rock-solid response time of 1ms.

It’s a capable specification. The 165Hz refresh rate is good enough for any top-tier single-player game, and it’s easily fast enough for mainstream eSports – and it’s minor overclock also helps in that regard.

In some ways, though, the specification could leave some gamers wanting more. If you want a particularly crisp single-player experience, for instance, then a 4K panel will do the job, even if you need a more powerful graphics card.

And if you want to play high-level eSports games, then you should look for a 240Hz or 360Hz display instead – although you’ll need a powerful GPU for that, too. Also not that 360Hz panels only run at 1080p.

Out of the box, the LG delivered a reasonable Delta E of 2.29 and a colour temperature of 6,001K. The former result offers enough colour accuracy for any game, and the latter figure is a little cool – but it’s not wayward enough to cause any problems.

The LG displayed 99.8% of the sRGB colour gamut, and the panel rendered an impressive 94.1% of the DCI-P3 colour space. That means the display can produce virtually every colour needed by mainstream games and HDR titles.

Switch over to the LG’s sRGB mode and colour performance improves, with the Delta E revising to 1.09 and the colour temperature at a near-flawless 6,399K. The brightness is lowered in this mode, but the LG still has enough punch to handle everyday gaming.

LG’s panel maintained its impressive colour performance with the brightness ramped up to maximum, too. Its only poor colour results came in the game-specific FPS and RTS modes – these options had a negative affect on Delta E, so they’re not worth using.

The UltraGear 32GP850-B delivered great colour performance, but its contrast ability is less impressive. At factory settings the panel’s contrast ratio of 907:1 is middling, and that figure only improved slightly to 943:1 with sRGB mode engaged.

The contrast figures are not disastrous – indeed, they’re reasonable for an IPS panel. In real-world terms, the contrast results are caused by slightly high black points, and that means darker areas in games don’t have quite as much depth or nuance as they do elsewhere.

But the LG’s slight lack of contrast doesn’t ruin gaming, and you’ll still get a vibrant and engaging experience, even if it could do with more intensity. Ultimately, an IPS gaming panel should be hitting a contrast ratio beyond 1,000:1, and a VA display will have far greater contrast, albeit often at the expense of colour accuracy.

LG’s panel does a good job with fast-moving games. At its default 165Hz setting the display is easily sharp enough to handle mainstream gameplay, and the move up to 180Hz provides a minor improvement without introducing any issues like ghosting or blurring.

The UltraGear has Normal, Fast and Faster response time options, and they’re all good, with little difference in sharpness between all three options. There’s a tiny bit of added inverse ghosting in the Faster option, so I’d stick with the Fast mode for the best balance of performance.

Ultimately, though, the 32GP850-B delivers smooth, fast, and crisp gameplay at 165Hz and 180Hz and with all three of those modes engaged – you’ve got to be looking really closely to spot faults. Whatever you pick, you’re going to get good performance.

Don’t expect this display to deliver good HDR content, though. While LG does boast that this screen supports HDR10 content, its maximum brightness of 407 nits isn’t high enough to deliver the punch required, and the panel has no fancy dimming. You’ll have to spend more to get good results.

In the US, you can also head to Amazon and Walmart. Note that some retailers don’t have the ‘B’ on the end of the model number but it is the same monitor.

That’s certainly not extortionate, but you can find this kind of specification for below £450 or $450 if you shop around. If you’re willing to forego IPS and buy a VA panel instead, expect that figure to drop below £400 or $400, but be aware that you won’t necessarily get the LG’s colour accuracy.

If you’d rather have a display with a 4K resolution, then consider the AOC U28G2XU. That panel is smaller than the LG, but it pairs its 4K resolution with a 144Hz refresh rate and costs £582 in the UK and a similar amount in the US.

If you’re still unsure, head here for our chart of the best monitors for every budget.

The LG UltraGear 32GP850-B doesn’t have the specification to compete with specialist rivals, and its contrast performance is average rather than great – but don’t let that put you off.

This display still has good enough contrast to make games look decent, and it pairs that with excellent colour reproduction alongside a large diagonal and good resolution – and a refresh rate that will handle any mainstream single-player or esports situation. The LG has some decent features, and its impressive OSD and port placement make this screen easy to use.

This panel doesn’t veer off into a specialism like many of its competitors but instead delivers rock-solid mainstream performance, and so it’s a good choice if you want a versatile panel for all sorts of gaming situations.