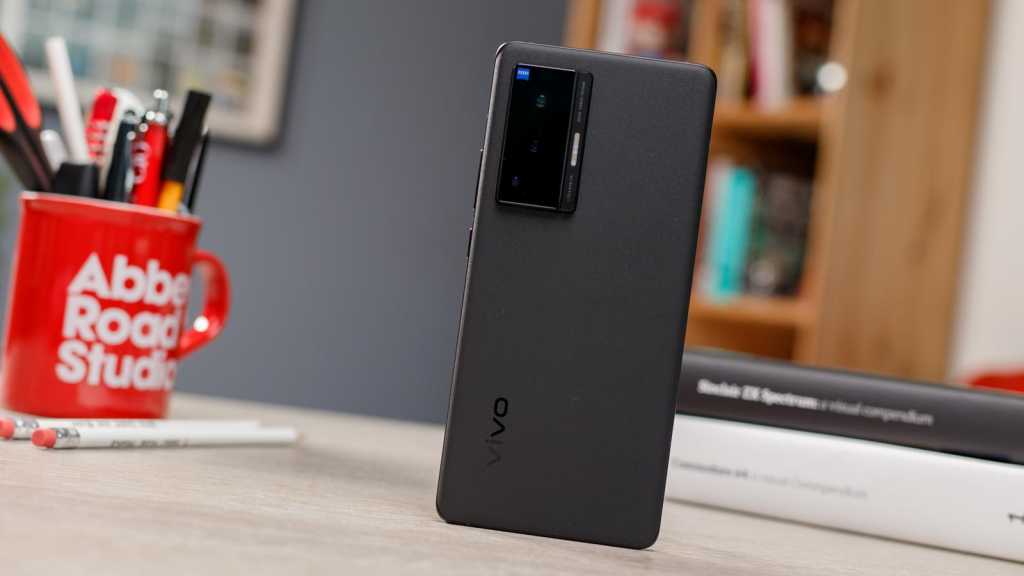 The Vivo X70 Pro boasts an amazing quad-camera set-up and a slick design, but the processor is a step down from the last generation.

The Vivo X70 Pro is one of three phones in the X70 series – launching alongside the X70 and the X70 Pro+. If you’re looking for an impressive camera set-up, a sleek build and a great battery life, then this phone could be one to consider.

As with several other models by Vivo, it isn’t yet available in the UK or US. If you’re happy getting a handset imported to pop a SIM in, then read on for our full thoughts of the Vivo X70 Pro.

As usual, Vivo has produced an extremely premium and eye-catching handset. It may be ever so slightly denser and heavier than its predecessor – at 7.99mm thick and with a weight of 183g – but it feels lightweight and is extremely slim for slipping in pockets.

I tested out the more understated matte Cosmic Back variant but there’s also an Aurora Dawn shimmery finish. The slim shape doesn’t compromise on the screen either, with a large 6.56in display with curved edges. Not all phone manufacturers manage to marry a decent screen with a slim body, highlighting how Vivo is ahead of the pack.

The back features a large, stepped camera module with the flash running down alongside the lenses – a design element that Vivo dubs “Cloud Valley”. Whilst the module takes up a big portion of the phone’s back, it enhances the design, rather than being an eyesore.

Ports-wise, there’s the usual USB-C for charging, along with the power and volume controls on the right-hand side.

There’s no headphone jack on the X70 Pro – an increasingly common trend on flagship phones these days, however, the box does come with a 3.5mm headphone jack to USB-C adapter – not always a sure-fire inclusion in cases like these.

The rear design is complemented by a stunning Full HD+, 6.56in, 120Hz, AMOLED display. This is only interrupted by the punch hole camera module, which sits at the top of the phone’s display, in the centre.

The colours are rich and bright, and the textures are extremely detailed. It’s a treat for watching videos on and the 240Hz touch sampling rate also means that mobile gaming feels superb. The refresh rate can alter between either 60Hz, 120Hz and smart switch, which will choose the optimum setting, depending on what you’re doing.

It’s not a truly dynamic refresh rate, as it can only switch between 60Hz and 120Hz, and not anything else in-between. That said, the power-saving capabilities are still excellent, even when you use it at a higher refresh rate.

In addition, there are other flagships that boast QHD+ panels, rather than Full HD+ resolution, even if it’s difficult to spot the difference in actual use, due to the higher pixel density; technically it’s still a drawback worth keeping in mind.

The under-display fingerprint sensor is occasionally iffy to use, especially after washing your hands. Fortunately, you can easily get around this by using face unlock, or a password.

The X70 Pro is also fitted with a single, bottom-firing speaker, rather than a stereo set-up. The sound isn’t anything impressive – details are lost, the audio isn’t the loudest and bass tones don’t have that ‘thump’ which you can find on other flagships, such as the Asus ZenFone 8.

It’s worth noting that there’s actually two versions of the X70 Pro, which change the internals of the phone. In China, the X70 Pro comes with an Exynos 1080 chipset and LPDDR5 RAM.

I tested the global version, which instead comes with a MediaTek Dimensity 1200-vivo processor (yes, another special Dimensity variant for a specific manufacturer), which is paired with 12GB of LPDDR4X RAM and 256GB of storage. Other parts of the world include smaller RAM options at 8GB, and storage options starting from 128GB.

The chipset on the X60 Pro is a Snapdragon 870, which performs better in our benchmarking tests, proving that the X70 Pro is a slight downgrade from it’s predecessor, when it comes to internals:

That said, real-world performance isn’t anything to sniff at. The phone is fast and responsive, even when taking on heavy-duty tasks. It’s likely that Vivo opted for the slightly less powerful chip in order to stop the price tag from sky-rocketing.

If you’d prefer better performance, then you can always splash out for the Vivo X70 Pro+, too.

Most people will buy this phone for its camera capabilities, and fortunately, the Vivo X70 Pro doesn’t disappoint.

On the front, there’s a 32Mp selfie camera with an f/2.45 aperture. All the lenses are engineered with ZEISS optics too.

Gimbal stabilisation helps move the lens around (even through rotational axes), to help minimise any unwanted shakes you get when shooting. When combined with the large aperture on the main lens, the results are bright, sharp photos.

I took most of the photos on the X70 Pro in Iceland under very cold conditions, where my hands were shaking, and it was remarkably easy to take a very impressive shot, even in lower light. Details and textures of all types jump out on the screen, including water and steam.

Colours are on the oversaturated side and don’t really appear true to life, however, if you’re a big fan of using filters on Instagram to create a photo where tones really pop, then this is a phone to consider.

HDR and Zeiss natural colour modes are turned on automatically, but you can switch these off should you wish. The only issue I found is that on occasion, these enhancements would give the rear camera either an odd blue tint or a washed-out white one. Turning the modes off would fix this problem.

As with most other phones, there is a drop in quality when shifting to the ultrawide lens, with slightly fuzzier details and more washed-out tones. However, it’s still good for travel shots or group photos and still manages to take decent photos, even of subjects in motion.

Both the telephoto and periscope lens ensure that zoomed-in photos still retain a lot of detail and colour. I took some shots of glaciers, and the contrast between the sunset and mountains looked very impressive, even at 5x zoom. You can digitally zoom in up to 60x, but the quality drops quite significantly here.

Portrait mode is also stunning on the X70 Pro, with just the right amount of bokeh, which helps profiles stand out. Night mode is also great, with colours lifted and artificial lighting made sharper and less fuzzy than what you’d see on cheaper phone cameras.

The front 32Mp selfie camera also produces excellent, realistic-looking images, and the colours on this lens are a little more on the natural side, which is nice to see.

Beauty mode is enabled automatically, which smooths out skin tones, takes away marks such as freckles and changes the shape of your features. I’m not a fan of this trend, as it gives an unrealistic look to selfies, and it certainly shouldn’t be enabled as default.

The Vivo X70 Pro can shoot video up to 4K at 60fps, and includes two modes for gimbal stabilsation. There’s also the option to shoot with the bokeh effect. Colours aren’t quite as impressive as what you’ll see in photos, but details are still crisp and clear.

The Vivo X70 Pro is fitted with a 4450mAh battery. Whilst this isn’t the biggest around, it still manages to deliver strong longevity. I could get just under two days of use, taking photos, using social media, watching YouTube and more, in between daily tasks.

This is also backed up by our battery test, in which the X70 Pro managed 13 hours and 25 minutes; much longer than the X60 Pro’s time of 9 hours and 33 minutes. Battery life seems extremely durable – a rare thing among many flagships.

Despite having a big battery, this phone also features 44W fast-charging technology. This manages to juice the phone up from flat to 67% in 30 minutes. It’s not quite like the crazy speeds we’ve seen from the likes of Oppo or Xiaomi, but having both a big battery and full charge in under an hour is fairly good going.

Unfortunately, there is no wireless charging support on the X70 Pro.

The OS is another thing that changes depending on if you have the Chinese or international version of the X70 Pro. The former runs on OriginOS 1.0, a new OS introduced just for this market. The latter (which I tested), runs on FunTouch OS 12.

Android fans will find this experience pretty similar to the stock version, with all the Google software you need and a simple dropdown menu for all the main settings.

FunTouch typically comes with a lot of app bloat and clutter though, and this is no different on the X70 Pro. Some apps can be deleted, but not all of them.

The phone I tested ran on Android 11, but from December 2021, the beta version of Android 12 will roll out across Vivo X70 Pro devices – according to Funtouch OS. The Vivo X70 Pro+ has already started to receive this update.

As an example, the Vivo X60 Pro’s international pricing converts to £500, but official UK pricing starts from £749.

You won’t be able to buy it on contract in the UK or US, but you can get the handset imported from the likes of AliExpress. We don’t know for sure yet if this phone will release in UK stores. If it does, we’ll update this article with official UK pricing and eligible retailers.

Vivo doesn’t typically release phones in the US, so if you’re in America, you’ll have to settle for an imported version.

For a similar price, you can opt for something like the OnePlus 9, which offers a better chip and faster-charging speeds. There are also other phones in the X70 range.

You could also consider the Vivo X60 Pro, if you would prefer a UK specific Vivo phone. Whilst the camera isn’t quite as impressive, it has arguably a better processor and still retains a great design.

Take a look at our list of the best Android phones for even more options.

Most people will buy the Vivo X70 Pro for its incredible camera abilities, which are on par with some of the biggest flagships out there. However, this phone also packs a great-looking design, long battery life and a smooth AMOLED display.

There are drawbacks – the processor is a step down from the X60 Pro, the speakers are poor, and the software features a lot of clutter. And of course – at the time of writing – you can only get the phone imported into markets like the UK and US.

That said, if top-tier photography is your bag, then you should seriously consider the Vivo X70 Pro.