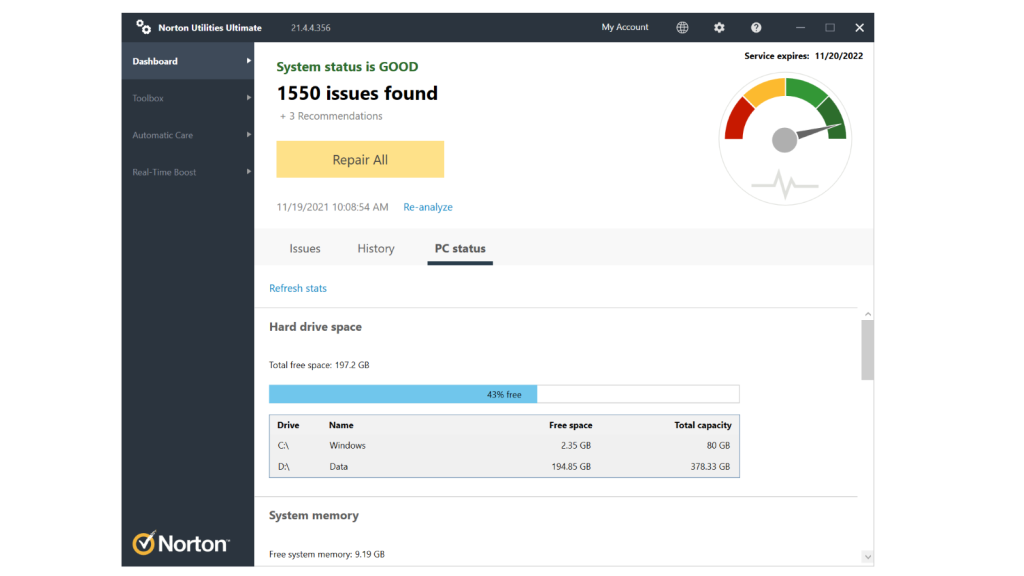 Norton’s top-tier PC cleaning and optimising software offers almost endless tools but is an expensive option considering how little space it can free up.

You might know Norton best for its 360 anti-virus software, but it also makes a range of other applications including a PC cleaner. Here we review Utilities Ultimate to see how it fares.

Like AVG TuneUp, there’s no free version of Utilities so I’m testing the paid-for edition. There’s Ultimate that I’ve taken a look at as well as a cut-down Premium option. Norton doesn’t even offer a free trial to allow you to try it out before buying.

Installation is easy enough and you’ll need 100MB of space available, a little more than some rivals but less than others.

Oddly, Utilities Ultimate scanned my test laptop as soon as the application loaded and before I could even put my product key in. An eager beaver then, but that scan didn’t take long, giving me a summary within a few seconds.

The result was 1550 issues found, but the interface was greyed out and the health meter hidden until I activated the software. Although that sounds like a lot, Utilities Ultimate stated that the system status was good before taking any action.

You can then see a breakdown of the issues between internet and Windows junk files. Click the drop-down next to ‘Remove’ and you can get a more detailed look at what has been found via ‘View details in wizard’.

Here you can then deselect any subcategories you don’t want to be removed giving you a granular level of control. That’s good but Norton doesn’t state how much space you’re saving which seems like an odd ommission.

If your goal is to clear space then it would be handy to know which areas are taking up the most storage rather than just a sheer number to show off.

Its eager beaver behaviour continues as after removing files, Utilities Ultimate scans the computer automatically again. After the first set of removals, it then reported that my system status was poor rather than the good previously stated.

So, was the original diagnosis wrong or did removing files make the system worse? I have to assume the former but this inconsistency doesn’t inspire much confidence in that speed dial graphic. The interface is otherwise easy to use and any 360 users out there will feel right at home here.

With no indication of saved space, I checked the stats under the PC status tab noting the before and after figures for the hard drive. Despite the impressive sounding number of issues found, Utilities Ultimate only managed to free up 800MB of space.

That’s the worst out of the six PC cleaners I’ve tested recently (under identical conditions) and a long way behind the next worst, which was MacPaw CleanMyPC at 1.65GB.

PC cleaner software is about more than just junk files but Utilities Ultimate only flagged up 18 registry issues where most rivals find hundreds.

The other recommendation from the scan was five potentially unwanted startup programs. Click on review and you can see which ones are suggested along with a ‘community choice’ (ie a public vote) on whether you should keep them active or not, and an importance level – although all of mine said ‘User Choice’.

You get three actions to choose from here: Keep on, Delay and Turn off. You’ll have to decide which ones are worth turning off if you want to speed up your boot time.

As the name suggests, Utilities Ultimate has a lot more to offer if you start exploring the interface beyond the main dashboard.

You will find the basic tools again under Toolbox but there’s plenty of other things you can make use of here including a disk defragmenter, application accelerator, drive scrubber, system privacy, system restore and super control panel.

Like rivals, Automatic Care offers to keep on top of things in the background without you having to periodically load up the program and carry out tasks. This includes registry problems, defrag system drive, junk files and more.

Real-Time Status is a rarer feature and offers, well, real-time optimisation of mainly your processor and RAM in order to keep your machine running as smoothly as possible.

It’s not possible to give figures of the impact of this, partly as my test laptop has high-end specs, but this could be a real boon for cheaper laptops and PCs with basic components.

As per rivals, Norton Utilities Premium is available via an annual subscription. It costs £59.99/ US£69.99 for 12 months and automatically renews if you don’t cancel it.

It’s a shame not to see a single device option for those that don’t need to install it on other machines, though. However, you can opt for the cheaper Utilities Premium at £39.99 per year if you don’t mind missing out on a few tools like internet setting optimisation and searching for accidentally deleted files.

Norton Utilities Ultimate is certainly packed with features and tools. So much so that you could easily spend hours exploring them and still not discover them all.

On that front, it’s a power user’s dream and existing Norton users will feel right at home with the user interface.

While it ticks a lot of feature boxes, the software is on the expensive side and will be overkill for many people, especially if you don’t need it on more than one PC. The Premium version might be a better fit, with slightly fewer tools.

What’s odd here, apart from how eager Utilities Ultimate is to scan the machine is how it failed to even free up half as much space compared to rivals in the same test conditions. So, if hard drive space is high up your list, then look elsewhere.