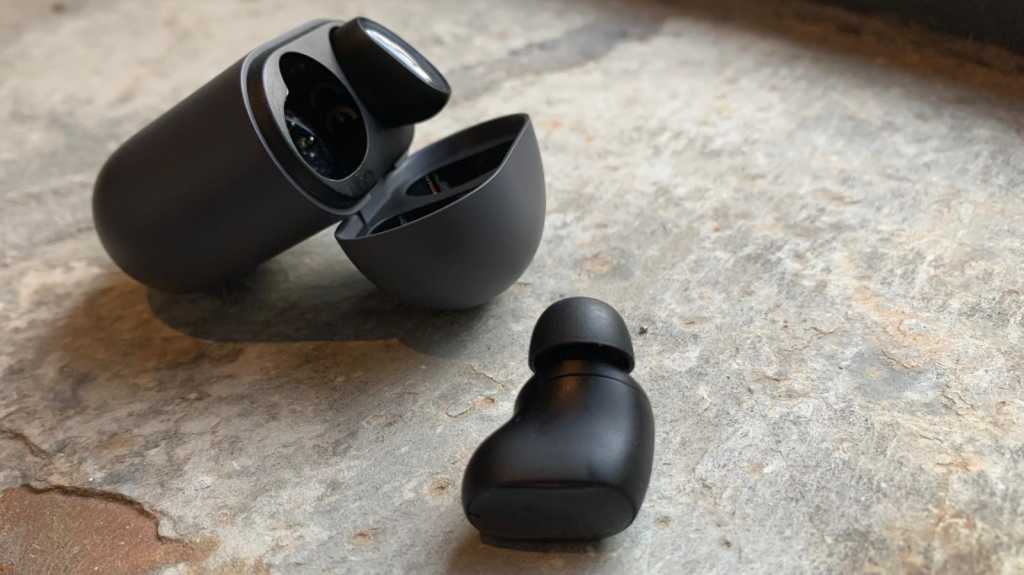 The Redmi Buds 3 Pro get the basics right and then go further than rivals by offering wireless charging, ear-detection and fast charging. These unusual bonuses make them a great budget choice.

Now, the company is back with a new set of TWS Bluetooth earbuds, replete with active noise cancelling and wireless charging. I pop them in my ears to check out the signal to noise ratio of the Redmi Buds 3 Pro.

Wireless earbuds have settled into two main schools of design over the past few years, with either protruding stems (circa the original Apple AirPods) or the smaller, bulbous frame that keeps most of the casing in your ear.

Xiaomi has opted for the latter, with a touch-sensitive panel on the outer-surface of the bud which allows you access to the various controls on offer. 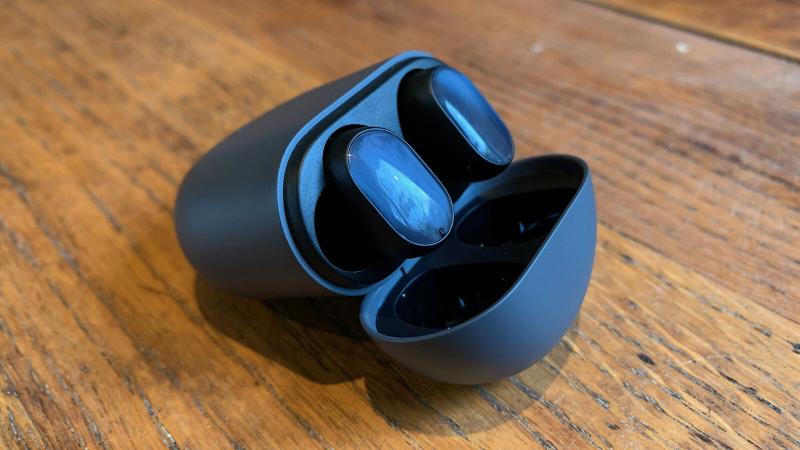 The case also follows a well-worn path, with its pill-shaped chassis covered in a matt finish that’s soft to the touch and grants a decent amount of grip without meaning it sticks in your pocket.

Flipping open the lid allows you to easily withdraw the buds, and also illustrates how much of the case is there to house the 470mAh battery that promises a large amount of power and the ability to fully replenish the buds over four times from a single charge.

You can accomplish this via the USB-C port in the lower edge of the case or via a Qi wireless charging pad if you have one at home. This is very rare at the budget end of the market.

In other wireless news, the Redmi Buds 3 Pro uses Bluetooth 5.2 to connect to devices, plus it has the ability to hold two connections simultaneously. This is a handy feature if you like, for example, to switch quickly between your laptop and smartphone while listening to content.

The buds themselves are a compact 25.4 x 20.3 x 21.3mm and fit comfortably in the ear. Should you need a different size of silicon tip, then you’ll find three variations in the box, along with the manual, a USB-C cable but no charger as is customary. 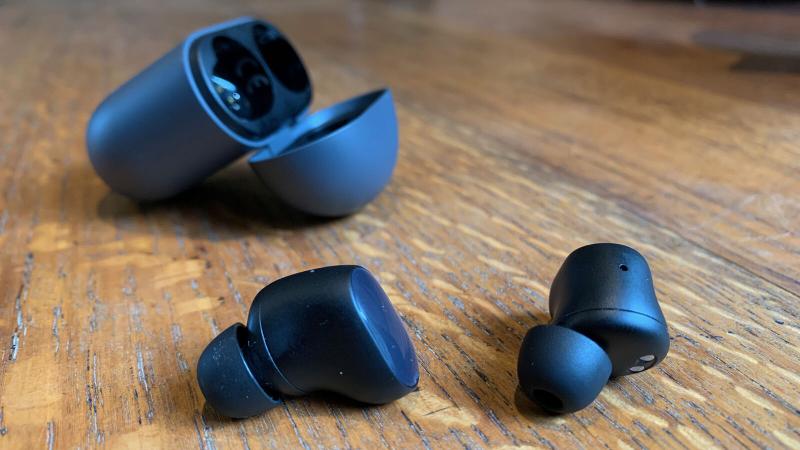 In-ear detection means that playback automatically pauses when you remove one of the buds, and you’re able to wear them safely during light rain showers or energetic gym sessions thanks to the IPX4 rating that guarantees protection against splashes and sweat.

Connecting the Redmi Buds 3 Pro is very easy. There are two methods: holding down the pairing button on the case or simply taking the buds out of the case. Either of these will turn on the Bluetooth signal and you just have to select the buds from the list on your device. Dead simple, and very reliable in my time with the buds.

The buds speakers are a 9mm composite vibrating diaphragm coil, accompanied by three microphones to facilitate making and receiving calls.

Listening to music on the Buds 3 Pro is a very pleasant experience. Volume is plentiful, frequency separation is good, so you end up with a balanced sound that fills your ears.

There are two modes as standard, with one offering Active Noise Cancellation while the other, ‘Dual Transparency’ allows a small amount of outside sound to be heard via the microphones. The latter is useful when, for example, you’re out walking at night or on country lanes and want to keep an ear on what’s happening around you.

The noise cancellation itself is ok, doing a decent job of lessening the din of a city, busy train or vocally excited family, but it’s not able to completely shut out the world. It does cut out some sound, but you’ll have to have the earbuds jammed into your ears pretty firmly if you want to avoid any distractions.

It’s a similar level of performance to the likes of the Tronsmart Apollo Air+, Enacfire A9s and Huawei FreeBuds 4i, all of which are at similar price points.

If you have a Xiaomi or Redmi phone though, you’ll have access to additional modes which might prove more powerful. It also boasts Adaptive Noise Cancellation where the buds analyse the sounds in your environment and change the level of cancellation accordingly. Like an auto-brightness setting but for audio. Sadly, I didn’t have a compatible device around that I could use to test this feature. 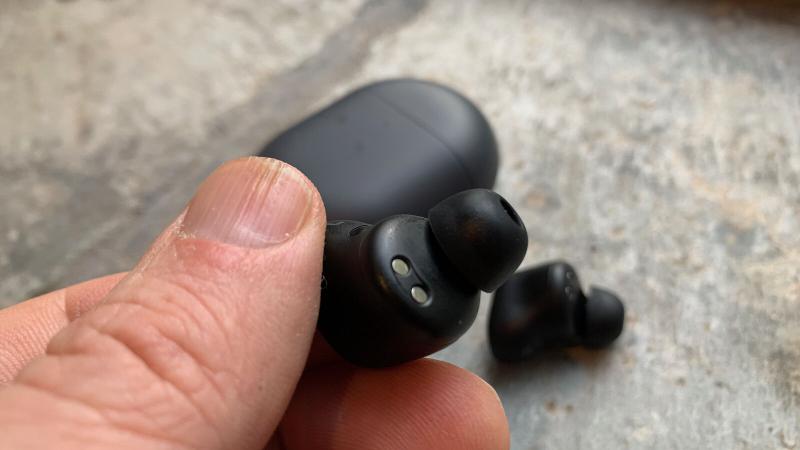 Connecting the Buds 3 Pro up to an iPad allowed me to see how the video synching worked on Netflix and similar streaming services. Thankfully, the buds proved fast enough to keep everything in time with each other, so I didn’t suffer the mental anguish of out-of-sync audio that I’ve experienced with some other budget earbuds.

The simultaneous dual-connection feature is very useful and something that should be standard on all wireless earbuds. With the buds connected to my phone, I replaced them in the charging case and held down the pairing button. When the light started flashing (indicating pairing mode), I went to my laptop’s Bluetooth menu and selected the Buds 3 Pro.

With the buds connected to both, it was a matter of playing audio on one as normal, then starting audio on the other device, which instantly took priority. This makes it easy to move seamlessly between the two, without the whole unpairing/pairing process necessary on many rival offerings.

Call quality is fine, with the three microphones working to try and reduce noise. There’s only so much you can do with tiny apertures though, so wind and loud environments still present a challenge.

Xiaomi has kept things simple with the Buds 3 Pro. The controls are the same on either bud, so you don’t have to remember more than three commands. Tapping either twice will play or pause any tracks to which you’re listening or answer an incoming call. Three taps will skip to the next track or reject/end a call, while pressing and holding down one of the buds for a second or two will switch between the noise cancellation modes.

I found it frustrating not having the ability to control volume from the buds. Yes, you can quickly do that via your phone or from many smartwatches or fitness bands, but surely volume would be more useful than skipping tracks?

This could be a personal bias though, as I listen predominantly to podcasts and audiobooks, both of which don’t really have tracks at all and it’s not a common feature on rivals either. 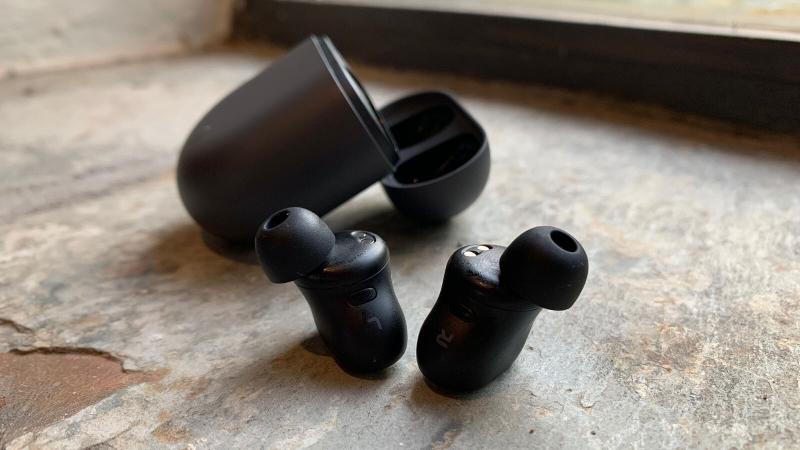 Still, the touch-sensitive areas of the buds are responsive and deliver reliable execution of commands. They don’t require much in the way of pressure either, so you’re not having to press the buds into your ear canal whenever you want to pause a song.

According to Xiaomi, the Buds 3 Pro can last for a maximum of 6 hours on a single charge. There are some caveats though, with the volume being at 50% and noise cancelling turned off.

Years of playing in rock and blues bands in small venues has had an impact on my hearing, and as such 50% volume feels somewhat conservative for some albums, so I did move things around a bit during testing.

I managed to get a little over four hours from a single charge, with the ANC enabled, which is normal for a lot of earbuds I’ve tested over the past year or two. Naturally, if you’re not a deaf old musician like me, then you may find your mileage takes you a little further out of town. 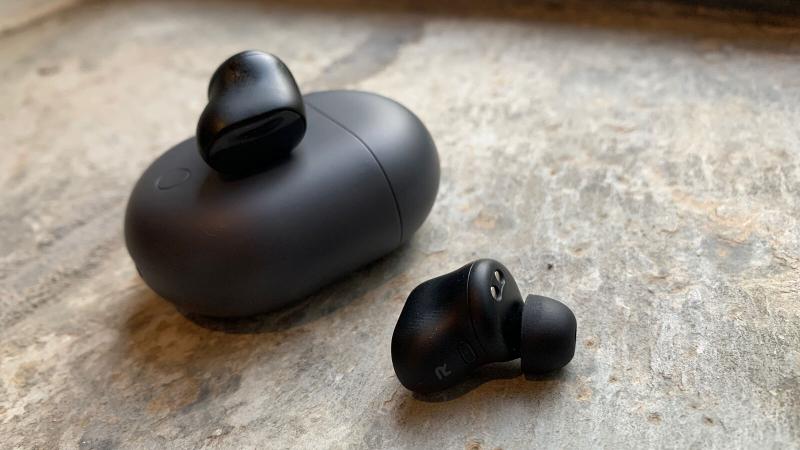 Recharging is interesting, as a 10-minute fast charge grants you around three hours of listening time.

For a full recharge of the buds and case you’re looking at around 2.5 hours, which is worth the wait, as this provides enough power to replenish the buds four and half times before you need to plug them in again.

The theoretical total, by Xiaomi’s numbers, is 28 hours which is decent. As mentioned earlier, the case has wireless charging as standard which is a rare feature for earbuds even twice the price of these.

Xiaomi sells the Redmi Buds 3 Pro directly from its site for £69.99/€69.99 and links to Amazon US where you can buy them for US$76.97 (presumably due to the complications Chinese companies have with the US government at the moment). The buds come in either Graphite Black or Glacier Gray liveries.

All of the earbuds mentioned have appeared with discounted prices at different times, so it’s a good idea to shop around. Be sure to also take a look at our guide to the best budget wireless earbuds to see what other ones are worth considering.

Xiaomi has obviously learned some lessons from its previous efforts, as the Redmi Buds 3 Pro are a nice pair of wireless earbuds for a reasonable price. The design is modern and comfortable to wear, while the ability to connect to two devices at the same time is actually more useful than you might think.

The lack of volume controls is a downside and the noise cancelling is restricted to two modes unless you have a Xiaomi or Redmi device, which seems a poor decision but also something that Apple would probably do.

Battery life is decent with fast charging and wireless charging making them stand out from the budget crowd. They also have another feature that’s unusual for cheap earbuds in ear-detection.

If you want good sounding wireless earbuds with noise cancellation and a range of smart features, then the Redmi Buds 3 Pro are ones you should check out.