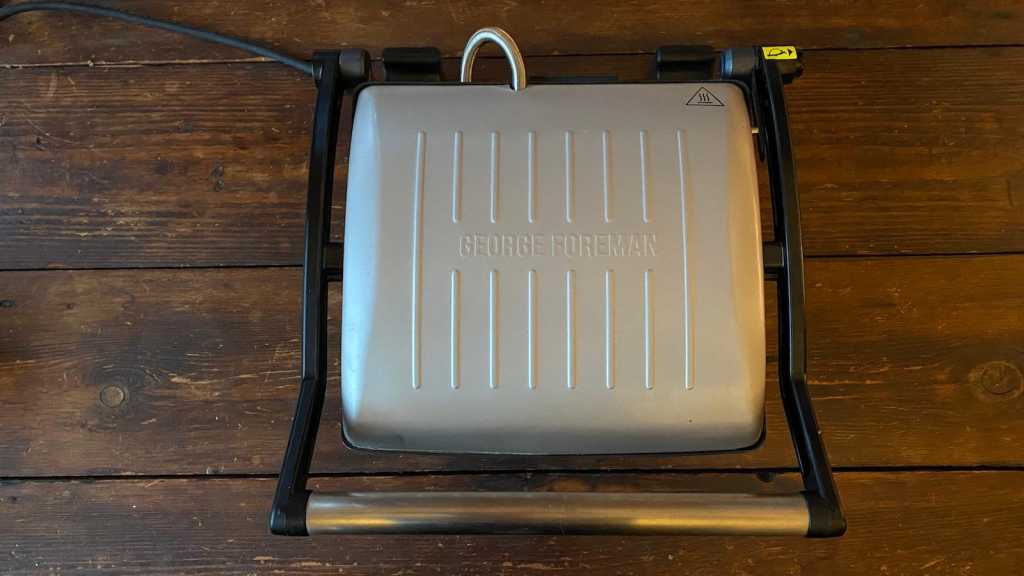 If you’re in the market for a grill or a sandwich maker, the versatility and features of the Flexe make it hard to beat.

We’ve all had the experience of buying a countertop appliance that seems – at the point of purchase at least – destined to change our culinary lives, only for it to wind up, greasy and unloved, at the back of a kitchen cupboard, never again to see the light of day. Often these appliances are single-use: waffle makers, ice cream makers, spiralizers, toasted sandwich makers.

One of the key selling points of the George Foreman Flexe grill is its versatility. You can use it to make toasted sandwiches and panini but you can also use it as a large, open grill for meat, fish and vegetables. 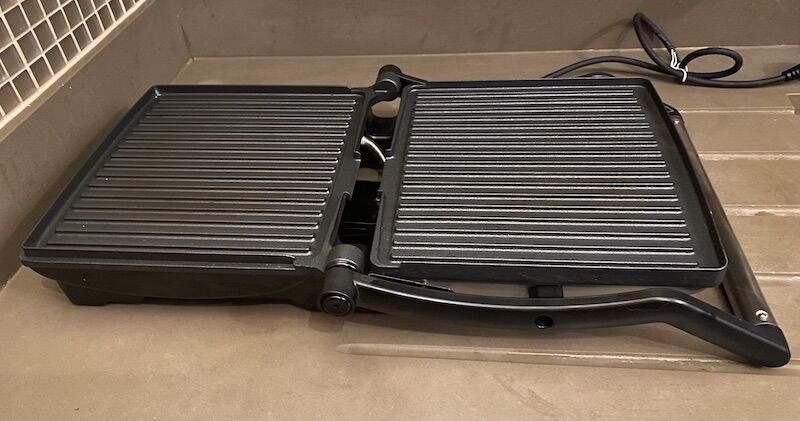 But does that mean that you should buy one? Read on for our verdict.

The Flexe grill has a silver-grey stainless steel upper housing and a shiny stainless steel handle. For its size (30 x 30 x 13.5cm), it provides a lot of grilling space: two plates of approximately 22 x 24cm when laid flat.

Toastie makers or grills aren’t always the easiest thing to find cupboard space for as they’re wide and often end up under a pile of kitchen utensils. In a nice design touch, you can stand the Flexe on its side and slot it into a cupboard vertically to save on space and make it easy to retrieve. 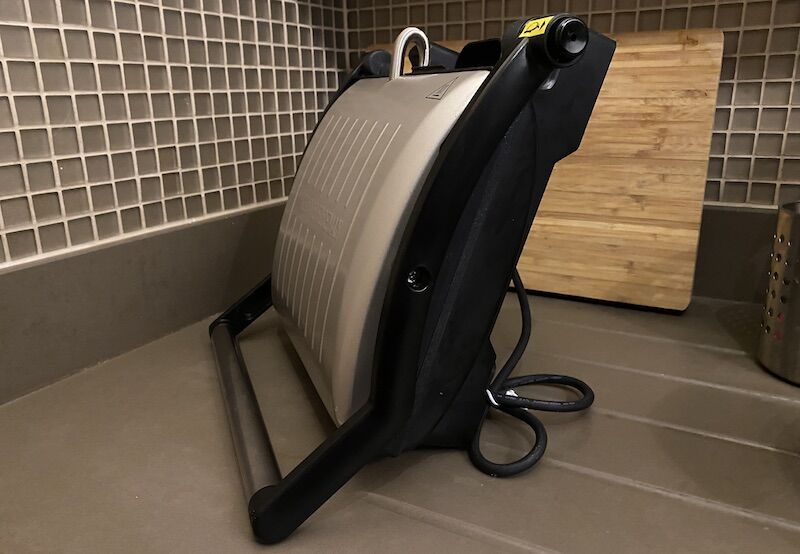 To switch between clamshell and flat grill, there’s a large button on the side that’ll unlock the hinge. You can also opt to have the grill inclined or flat, thanks to its easily adjustable feet, which you can simply flip over to reposition. 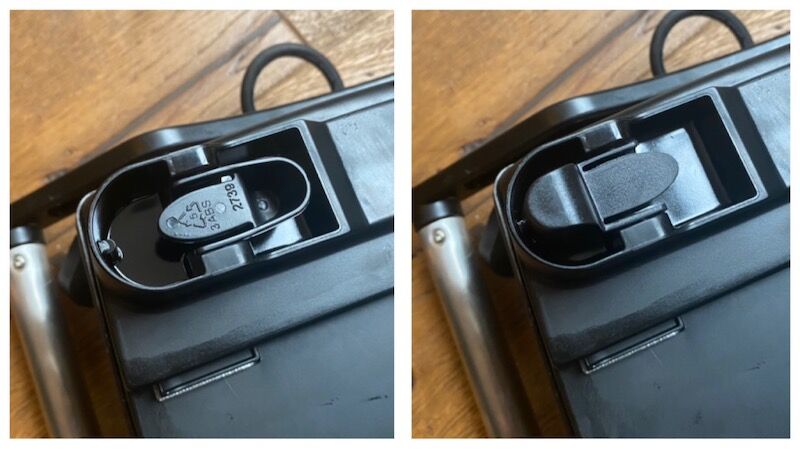 Set up is instant. Just slot the drip tray into the base of the Flexe and plug the appliance in. The drip tray itself is a handy feature. The brand claims that its grill can remove up to 42% of fat from grilled food and, well, that fat has to go somewhere. The tray is a well-designed solution: once the appliance has cooled, you can just remove and empty it. 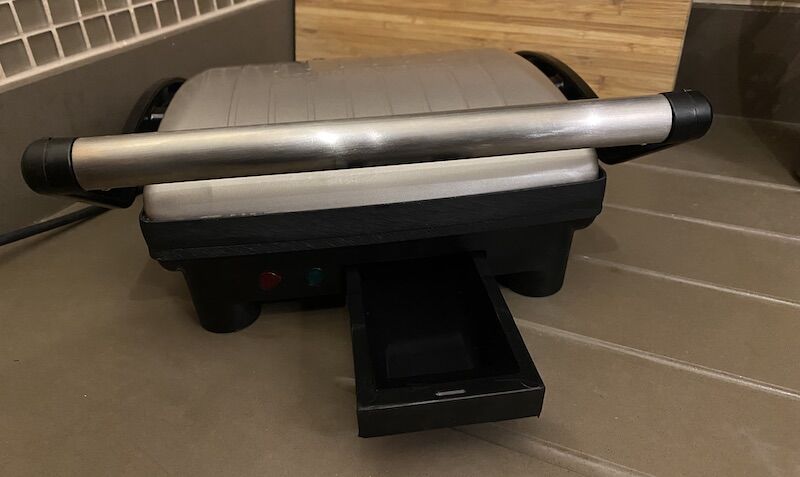 There are two indicator lights on the front of the grill. The red one illuminates as soon as power is going to the appliance and the green one will come on when it’s ready to use. It heats up quickly. 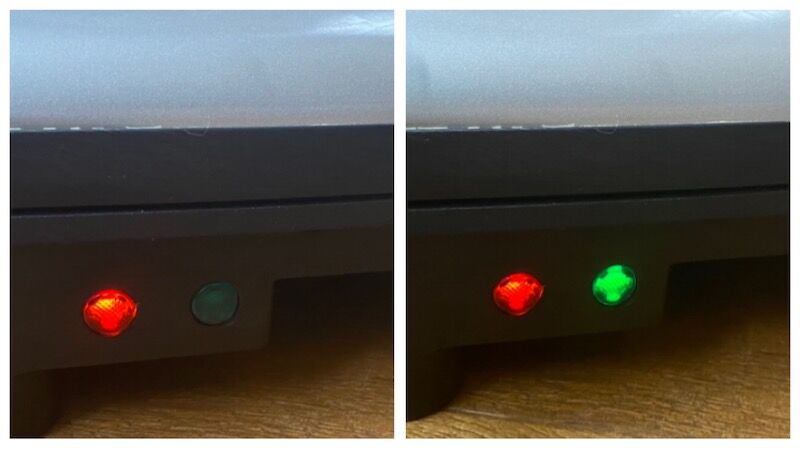 The Flexe grill has a floating hinge for grilling thicker foods. Naturally, we tested it first by making a toastie with a ridiculously chunky filling of cheese and beans. I was convinced that, like toasted sandwich makers in the days of yore, the filling would splurge out once the top grill came down. But the bread toasted, the cheese melted and the sandwich filling stayed put.

We also grilled burgers, and breakfast classics like bacon and tomatoes, all of which turned out well – after a bit of experimentation, at least. The only limitation of the Flexe is in figuring out how to make the most of the grill space and end up with well-cooked food.

I thought I’d be able to cook bacon on the open grill, next to other breakfast ingredients but I found that bacon strips were best cooked lid down, as they curled up away from the grill and didn’t get crispy enough. Burgers, on the other hand, did nicely on the open grill as long as they were flipped halfway through.

One thing to note: if you want a Flexe, you’ll need to find a spot for it under an extractor fan – unless you want your home fragranced by billowing clouds of bacon smoke.

The Flexe has a new non-stick coating on the plates that’s designed to make cleaning easier. When you’re finished cooking and the appliance has cooled, it should only need a quick wipe down.

I did find it easier to clean than most grills and toastie makers, although these appliances do get greasy and there’s no way around that. Also, I wouldn’t bother buying a George Foreman-branded cleaning sponge. It started to disintegrate with only a couple of uses.

The Flexe grill is widely available in the UK and has an RRP of £49.99. At this stage, you’re unlikely to find it sold for less. It’s more than your average toastie maker, that’s for sure. But it’s in line with the prices of other George Foreman products, and if you’re going to use it a lot, it’s reasonably priced.

The Flexe grill may not convert people who are determined to keep kitchen clutter to a minimum. At the end of the day, you’re just replicating ways of cooking that can be done under a grill or on a hob.

But if you do a lot of grilling or want to have a healthier option than frying your bacon, the Flexe’s excellent design and thoughtful details, such as its drip tray, floating hinge and vertical storage option, make it one of the best health grills you can buy.

Want a coffee with your toastie? Check out the best coffee machines we’ve tested.