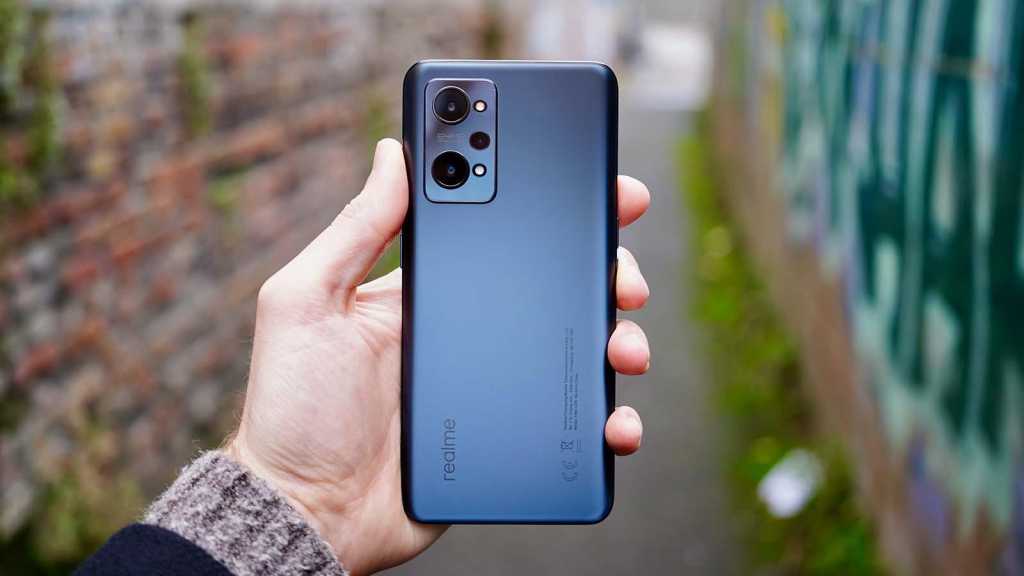 The Realme GT Neo 2 is another excellent mid-range smartphone phone to rank alongside the OnePlus Nord 2 and the Xiaomi Mi 11 5G. It’s got a poised design, an excellent 120Hz AMOLED display, and superb battery. All in all, this is one of the best-balanced phones you’ll find for around the £400 mark, even if it fails to impress quite as much as the Realme GT before it.

Realme is back with a new GT phone that punches well above its weight. The Realme GT Neo 2 packs solid upper-mid-range specs into a clean design, with a couple of stand-out components for anyone shopping in this area of of the market.

These include a superb 120Hz OLED display, an impressive 5000mAh battery with 65W charging, and an unusually hefty cooling system bolstering a capable Snapdragon 870 processor. It fails to excite in quite the same way as the original Realme GT did, but it’s arguably the more rounded product.

While it might have a plastic frame, the satin finish of its curved rear panel is extremely pleasing to the touch. That tactile appeal is enhanced by an X-axis linear motor, which supplies decent haptics.

I should note at this point that my model doesn’t come in the gaudy Neo Green used in most of the press materials, so I can’t speak to one of the phone’s signature flourishes. Part of me is disappointed by that, but most of me is glad.

The Neo Black model I received might be a little on the subdued side, but I was thankful for every strange look I didn’t get when pulling the phone out in public. The third colour, Neo Blue, might well be the ideal middle choice between pizazz and practicality here.

It’s also gratifying to see Realme including a solid pair of Dolby Atmos-tuned stereo speakers. This isn’t unusual in this sector of the market, but similarly priced phones like the ZTE Axon 30 5G go to show that you can’t take such a feature for granted.

Perhaps the best thing about the Realme GT Neo 2 is its 6.62-inch AMOLED display. Realme is at great pains to stress that the Samsung E4 panel used is the best in its category, and that only Apple and Sony can source better components from the South Korean giant.

The screen’s output is certainly clear and accurate. I recorded a healthy gamut coverage of 99.1% sRGB, 83.2% Adobe RGB, and 96.3% DCI P3 in the default ‘Vivid’ display mode using my i1Display Studio colorimeter.

This is a very fluid display too, with a maximum refresh rate of 120Hz. That’s fast becoming normal for even mid-range phones. What stood out to me was a 600Hz touch sampling rate, which means that it responds to your touch around 65% faster than the Realme GT and the Poco F3.

The main beneficiaries of that latter spec will be hardcore gamers, who will appreciate a display that responds instantly to your every touch. Talking of gamer-friendly features…

The Snapdragon 870 used in the Realme GT Neo 2 is a highly capable mid-range chip. You might have seen it used elsewhere in the Poco F3, the Black Shark 4, and more recently the ZTE Axon 30 5G.

In each case, it’s been notable for offering near-flagship levels of performance. There’s a good reason for that: it’s basically an overclocked Snapdragon 865, which was the chip used in most of 2020’s flagship phones.

Together with either 8 or 12GB RAM (with 7GB of additional virtual RAM available to the system), you’re getting a phone with ample headroom to run demanding games at top whack with silky smooth frame rates.

There’s a GT Mode 2.0 option available from the drop-down control bar that purportedly maximises performance, but I didn’t notice a difference when I did. There’s already more than enough performance on tap.

Helping that along is an unusually adept 8-layer cooling system, which incorporates a 4,129mm2 stainless steel plate, copper alloy, and diamond thermal gel. Despite lacking a physical fan, it’s very well geared for prolonged gaming sessions, and it means the phone doesn’t get too warm under load.

As you can see from the following benchmarks, the Realme GT Neo 2 competes very strongly with its mid-range rivals, and comfortably tops the performance of the OnePlus Nord 2 in both CPU and GPU terms.

It should be acknowledged that the original Realme GT packs in a more powerful Snapdragon 888 for the same money, but I suspect that most people won’t be able to tell the difference. Meanwhile the pay-off is a superior display and greater battery capacity for the Neo 2.

The Realme GT Neo 2’s camera system appears to be the same as the Realme GT before it. Once again it all centres on a 1/1.73″ 64Mp Sony IMX682 wide sensor, with the same f/1.8 aperture. This supplies crisp, punchy 16Mp shots through the usual pixel-binning techniques.

It has the slight tendency to overdo reds to the point where they look a little false, but I suspect many will appreciate the extra pop.

Low light performance from that main sensor isn’t anything to write home about, and there’s no OIS to keep things stable during those prolonged shutter times. Even so, Realme’s Night mode is pretty effective at brightening things up and balancing out exposure.

Also shared with the Realme GT is an 8Mp ultrawide with an f/2.4 aperture, offering underwhelming landscape shots that lose a lot of detail and shape at the edges, not to mention a good deal of the main sensor’s contrast.

There are 2x and 5x zoom options within Realme’s clean camera UI, but be aware that these are simple crops from that 64Mp main sensor. There’s no dedicated telephoto lens.

Results at 2x actually look pretty decent compared to the ultrawide, thanks to the relative quality and sharpness of the wide sensor. But 5x feels like a step too far in terms of clarity.

There’s also a 2Mp macro camera, which is mainly there for box-ticking purposes. You’ll have to dig into the ‘More’ menu to get to the related Ultra Macro mode, and then hold the camera the optimal 4cm away. All that, and the resulting image still doesn’t look too sharp.

There’s also a 16Mp front-facing camera, which does a better job of snapping sharp selfies than most cheaper phones.

This is a phone with genuine two day potential, especially if your usage pattern tends to be fairly moderate. Even if you do indulge in a some intensive gaming or media consumption, you’ll comfortably clear a day without worry.

In the PCMark battery test the phone lasted 11 hours 57 minutes, which is a strong result. That’s a better result than the original Realme GT and the OnePlus Nord 2, though it falls short of the Poco F3.

Recharging is a commendably swift process too, courtesy of the bundled 65W SuperDart charger. I recorded the Realme GT Neo 2 getting from 0 to 55% in just 15 minutes, and up to 94% in 30 minutes.

There’s no wireless charging here, but then there aren’t many phones at this price that pack in such a premium feature. You have the iPhone SE (which compromises in a host of other ways), and that’s about it.

Realme claims that the Realme GT Neo 2 will roll out in Europe with Realme UI 3.0 based on Android 12. However, our pre-release model is still running Realme UI 2.0 on top of Android 11, just like the Realme GT and Realme 8 series before it.

Realme’s take on Android is a lot closer to stock than many rival efforts. No, it’s not quite as easy on the eye as stablemate OnePlus with its OxygenOS, but its menus are refreshingly close to what you’d find on a Pixel phone (or at least would have prior to the Pixel 6 with Android 12).

It doesn’t take much burrowing to notice the differences, though. There’s a lot more customisation potential here, with the ability to adjust the look and even fine-tune the size of the app icons.

Aside from the aforementioned GT Mode, there are plenty of extra settings and toggles to explore too. Ultra Vision Engine upscales video content to be sharper and more colourful.

There’s also a Realme Lab setting that lets you try out new OS features before they’re fully ready for prime time. At the time of writing that included Sleep Capsule, which lets you place limits on your screen time to help improve your sleep.

For the most part, though, it’s simply a very clean, smooth and intuitive UI to use. You’ll have to manually activate things like gestural controls and the always-on display function, but that’s pretty normal for such mid-range Android phones.

I didn’t experience any of the bugs or glitches that I experienced when using the Realme 8 earlier in the year, either, which is reassuring.

That places it into direct competition with several impressive mid-range phones, such as the OnePlus Nord 2, and the Xiaomi Mi 11 Lite 5G.

It’s a close call between all three phones. The Realme GT Neo 2 has the edge on performance and display quality, while the OnePlus Nord 2 has the better camera and software, and the Xiaomi Mi 11 5G is the more stylish of the three.

The elephant in the room here is the original Realme GT, which offers a similar package with even better performance for the same price – albeit with a smaller battery and display.

The Realme GT Neo 2 is an impressively complete mid-range smartphone. Its colour options run the gamut from restrained class to gaudy muscle car, and its display is crisp and fluid.

Performance is very good for the price, courtesy of a Snapdragon 870. Together with an unusually meaty cooling system, it’s capable of running fast and cool.

Its camera system offers nothing special, and it fails to set the pulse racing quite like the Realme GT before it. But the Realme GT Neo 2 is as poised an all-round package as you’ll find for the money.