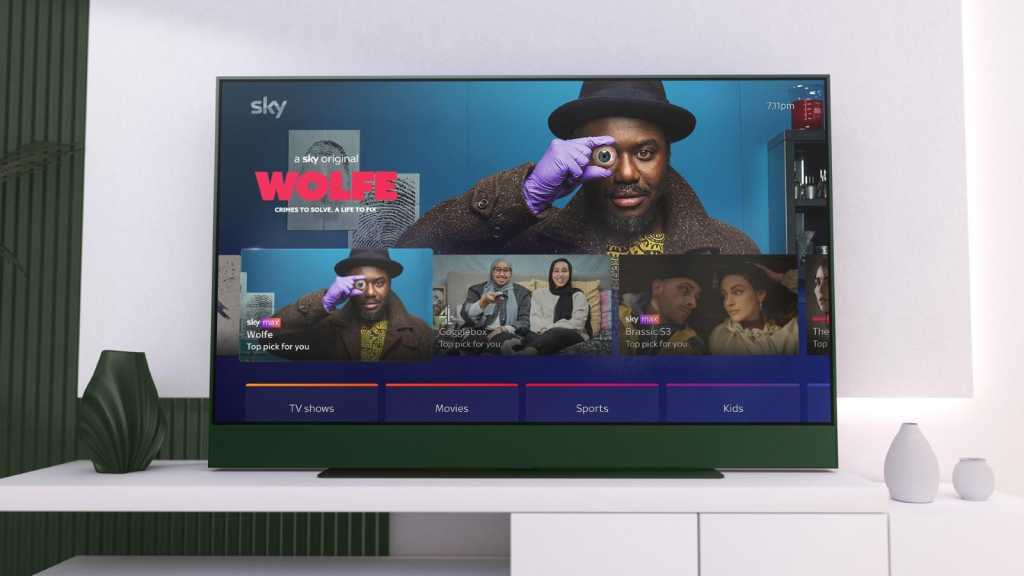 Sky Glass is the first opportunity to subscribe to Sky’s premium TV services over broadband, all neatly delivered into a bespoke TV environment. You even get the 4K telly as part of your monthly subscription. The hardware is chic and the software ground-breaking, but there are caveats.

Sky Glass is a whole new way to watch Sky TV. There’s no dish required, everything is delivered via your broadband connection. Sky Glass is both a service and the TV itself – specifically a 4K QLED model, with Dolby Vision HDR and a formidable six-speaker sound system.

The UI looks superficially similar to Sky Q, but it’s fundamentally different to use, not least because there’s no local storage. You don’t ‘record’ shows to watch later, you simply stream them from a cloud DVR or catch-up service as and when.

There’s clearly a lot to consider, so let’s break it down.

Sky has pushed the boat out when it comes to design. Slightly chunkier than the average flatscreen, Sky Glass is refreshingly chic and comes in a choice of five colour finishes: Ocean Blue, Ceramic White, Racing Green, Dusky Pink and Anthracite Black.

It’s well built too. The frame is aluminium, its forward-facing speaker array hidden by a customisable fascia covering. You can upgrade the fascia cover to better match your interior decor, or provide designer contrast.

Up top, a rooftop mesh grille protects its height speakers. Sky has made a point of not branding the set – there’s no logo on the frame. The firm also says it’s the world’s first TV to be certified CarbonNeutral.

The set has three HDMI inputs, one with eARC. They are version 2.1 but there’s no 4K/120fps high frame rate video playback, or VRR or ALLM support, as the screen is limited to 60Hz. The set doesn’t even list a low input Game mode amongst its presets.

Console owners are clearly not a key Sky Glass demographic then. I measured input lag at 115.4ms (1080/60), which is hardly conducive to eSports. For Animal Crossing and casual games though, it’ll do.

There is an Ethernet port, if you’d prefer that to streaming over Wi-Fi. Sky Glass is Wi-Fi 6 compliant, which is good news if you have a compatible router. The system is quite demanding on bandwidth, particularly if you opt for UHD and multiroom.

Sky Glass works with any ISP (internet service provider). The minimum requirement is 10Mbps, for SD, and 25Mbps for UHD so you might want to test the speed of your connection before ordering Glass.

There is a terrestrial Freeview aerial input, but it’s only provided for back-up, should your broadband go down.

Weirdly, there’s no headphone jack, and no option to connect wireless cans over Bluetooth either. The stylish remote control is colour matched to the TV and is backlit, and has a dedicated microphone. There is also a far-field mic in the set itself for voice commands.

For Sky Glass to work, the interface has to be solid, and for the most part, it is – although inevitably it’s a work in progress. This is not just, as you might have been thinking, the same as Sky Q.

With no local recording functionality, you ‘+’ content onto a Playlist to watch when time allows. This adds shows to the Playlist rail; these play back from either Sky’s Cloud DVR, or a mainstream catch-up player such as BBC iPlayer or ITV Hub.

This Playlist system is both extremely clever, but occasionally frustrating to use – at least until you come to terms with it.

There’s no limit to how many shows you can add, and there are no channel conflicts either. The Cloud DVR system plays your Sky channel episodes and movies immediately.

It’s smart too. If you Playlist a show, but the rights lapse and it moves from a broadcast channel to a streaming service, the Playlist will theoretically track it from one to the other.

But if you’re a PVR user who parks shows on their hard drive for years (hands up), you’ll need to pull your finger out.

Playlisted shows can disappear fast. A Halloween movie marathon I ‘plused’ from the Horror Channel disappeared after just a week, before I could watch them.

There are also channels that have yet to sign any Cloud DVR rights agreement, most obviously BT Sport, so you can’t stream any of its content after broadcast.

Sky Glass responds well to voice control. You can wake the set from standby with ‘Hello Sky’ and use the same wake word to select channels or search for content.

When it comes to picture performance, I rate the Sky Glass panel a mid-range 4K QLED offering, with ‘Intelligent Zonal’ local dimming. It presents sharp, colour-rich images when left to its own devices.

While there are various image presets (Movie, Entertainment, Sport, etc), it’s evident that the set is designed to be left on Auto.

When it encounters Dolby Vision content, it goes into either Bright and Dark modes (set in the menu). Bright is better when not viewing in a fully dark room. There’s also support for HDR10 and HLG.

Sky Glass has Auto Backlight Adjustment, which manages settings based on ambient room lighting, but for the most effective HDR performance, I would suggest switching this off.

Average Picture Level is good, although the set isn’t the brightest HDR performer. I measured peak HDR brightness just over 425 nits, with a 10 per cent measurement window, and Auto Backlight Adjustment off.

This doesn’t tell the whole story though. During testing, Sky dropped an update which specifically lifts the set’s performance with HLG, to help make its Sky Sports coverage pop a little better.

Audio is best in class. The six-speaker 3.1.2 Dolby Atmos array presents a huge wall of sound. While most comparable flatscreens sound woefully thin, this system has towering clout. Total power output is rated at 215W and you can do without a dedicated soundbar here.

Just like a mobile phone, the price you pay depends on your chosen TV, viewing package and length of contract with prices from £13, £17 and £21 per month for the three different screen sizes, if you take out a 48-month contract.

You’ll then need to add in your subscription package cost (Sky Ultimate TV with Netflix is £26 per month), with additional premiums for Ultra HDR and Dolby Atmos sound and multiroom – the latter comes via a Sky Stream puck with an upfront cost of £50 per unit. Unlike the Sky Mini boxes which partner Sky Q, this runs autonomously.

You can only buy Sky Glass from Sky direct. Sky’s installation team will deliver direct and assemble the set, and if you want, dispose of all the packaging.

Find out more details on how to buy Sky Glass as Diamond & Platinum tier customers who’ve been with Sky for over eight years get priority.

Check out more TV options in our best TV and best budget TV charts. You can also read up on the rival entertainment package Virgin TV 360.

Sky Glass is unique, which makes it a challenge to judge. For many viewers, it’ll tick the right boxes: a sophisticated premium TV streaming platform, distinctive design, colour-rich 4K pictures and a contract payment plan.

The QLED screen performs much as I’d expect a mid-range LED to do, but the sound system is a magnitude better than anything else in its range. The lack of proper gaming support, not to mention that AWOL headphone jack, could be a deal-breaker for some though.

The all-streaming environment takes some getting used to, but it’s actually pretty cool. Many of its current inconsistencies are down to licensing (cloud streaming rights, Watch from Start rights, you name it), which will doubtless be resolved in time.

Our verdict? Sky Glass is one to watch.