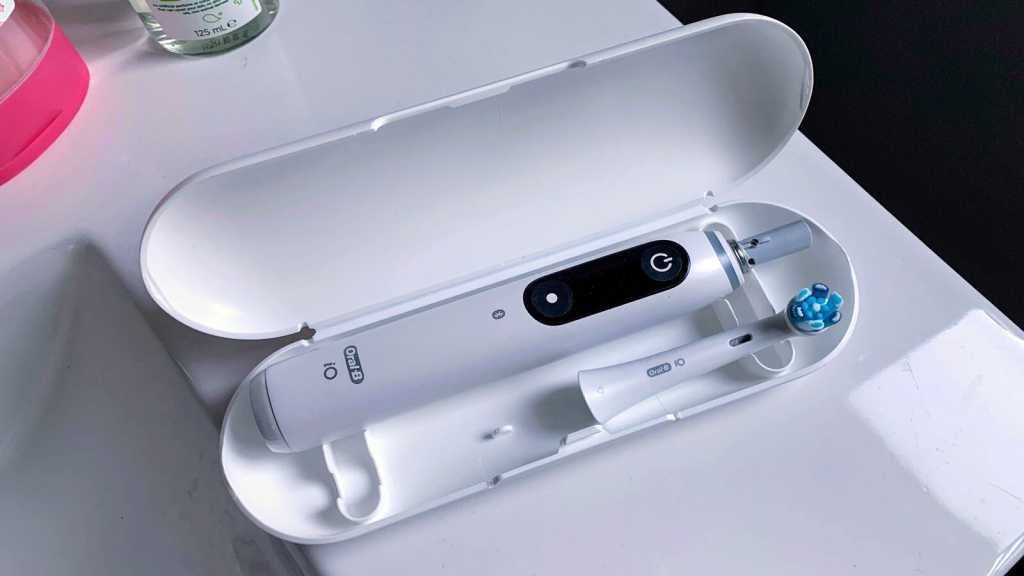 If you can find it discounted, the iO Series 6 offers sensible compromises over the Series 9 to offer the same effective cleaning and an interactive display at a much more affordable price.

Buying an electric toothbrush is a good idea. An 11-year study on whether electric is better than manual found that those who used electric toothbrushes had healthier gums, less tooth decay and also kept their teeth for longer. It also found that models with oscillating heads were “really effective at removing plaque”.

But do you need to buy an expensive electric toothbrush with an OLED screen, Bluetooth and a companion app?

The short answer is no, but there’s a longer answer which isn’t quite as definitive. And if you want to know what it is, keep reading.

The Oral-B iO Series 6 is the more budget-friendly follow-up to the top-of-the-line Series 9 which we reviewed last year. In many ways it’s identical: the design is the same, it uses the same brush heads, the same app and offers the same modes and cleaning power. 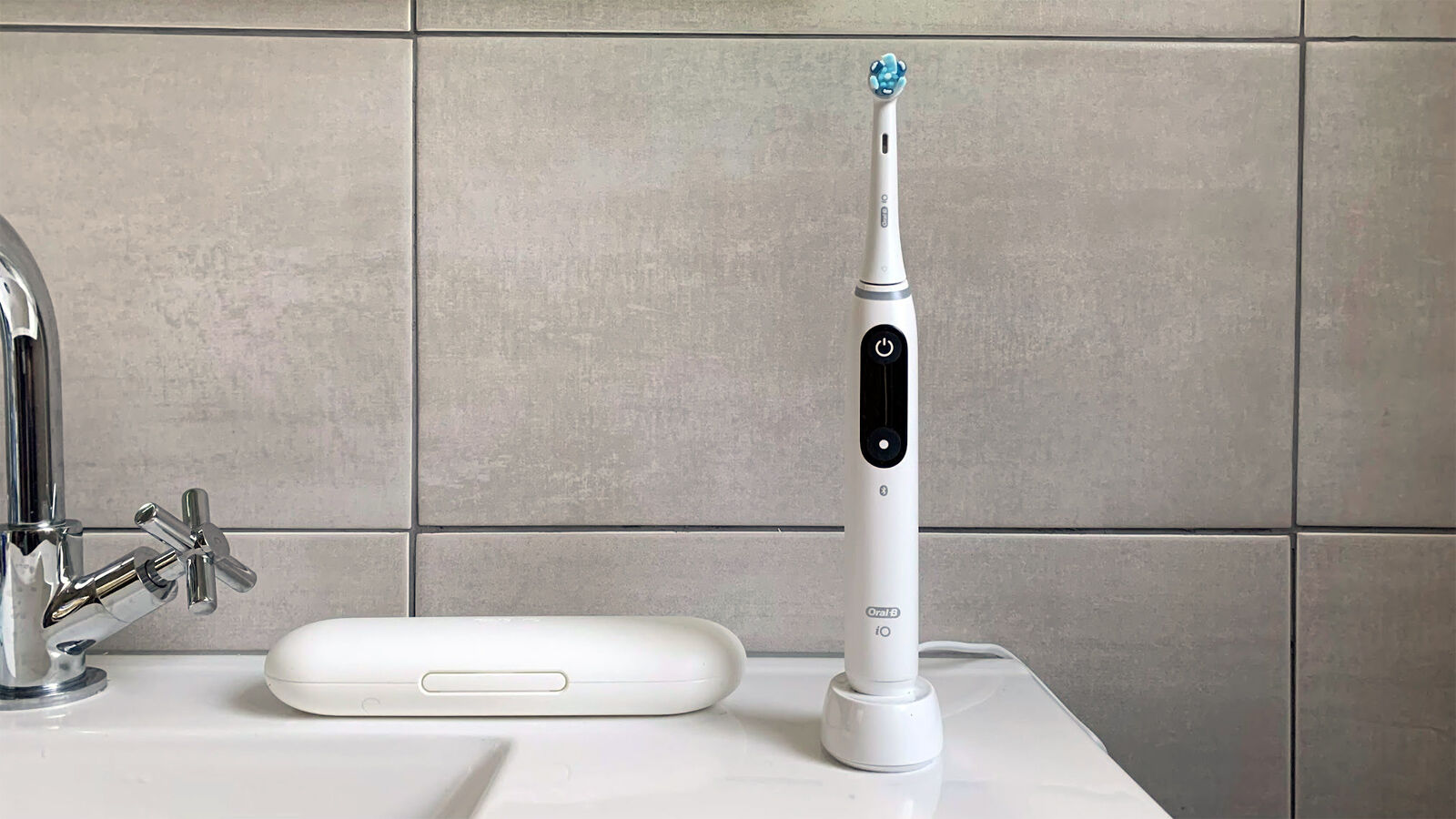 But a few cost-saving measures have brought down the price significantly so it’s merely very expensive as opposed to ludicrously expensive. (I’m talking about the UK RRP specifically, but as you’ll see you don’t have to pay that.)

What’s different is that the Series 6 has a more traditional charging stand instead of the Series 9’s magnetic puck and there’s a basic plastic carry case instead of one which also charges the toothbrush.

The screen is monochrome instead of colour, but these are trade-offs that are easy to live with.

When you first power on the brush you use the two buttons to choose the language and set the colour of the light ring. You could then use it without ever installing the app, as you can cycle through the modes without it. 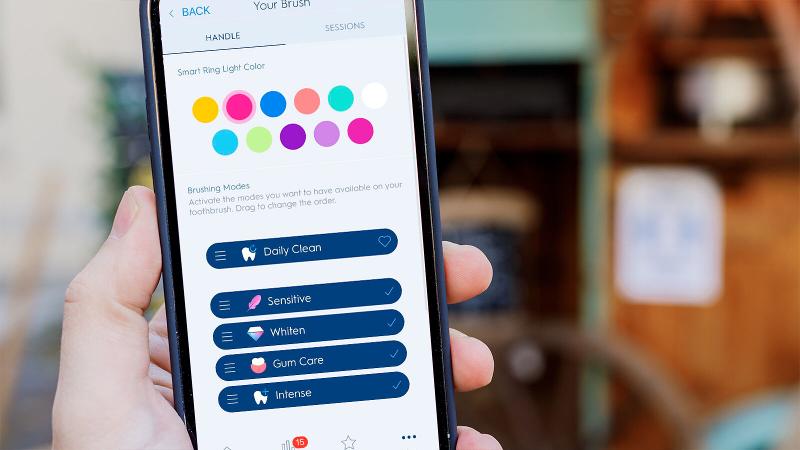 But the app has a useful guided cleaning mode which works well as it can detect which teeth you’re cleaning. More on that later.

The brush handle doesn’t offer much in the way of grip, but if you keep it dry, it’s not really a problem. Keeping it dry is the hard part, as the brush head’s stem is quite wide, and this – in my testing at least – made it difficult to form a seal around to stop water running down the brush handle.

There are five modes: daily clean, sensitive, gum care, intense clean, whitening. Daily clean is the standard mode, with sensitive and gum care turning down the power and intense clean and whitening ramping it up.

With each, the brush will pulsate every 30 seconds to prompt you to move to a different quadrant. When you turn off a smiley or sad face tells you how you did. That’s partly based on time (two minutes is the target) and partly on coverage: you can’t get away with 1:50 on your top teeth and 10 seconds on the bottom set.

It also monitors pressure, showing a green ring around the handle when you apply the right amount of force, red when it’s too much and white (or whichever custom colour you choose in the app) when there’s too little or no pressure. 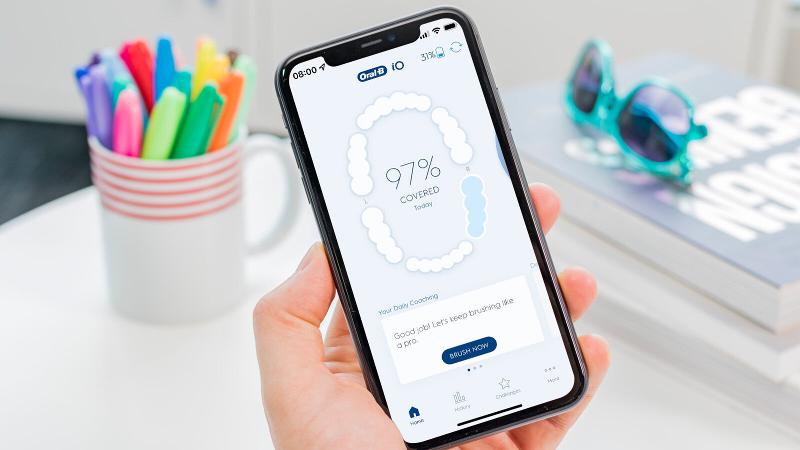 Of course, if you use the app you get the ability to choose that colour, decide which modes should and shouldn’t be shown on the display, adjust the target time for brushing and use the guided mode.

With that, you get realtime feedback on coverage with an animation that slowly changes from blue to sparkling while when those teeth have been properly cleaned.

As my colleague Emma noted in her review of the iO Series 9, this gamification can lead to longer brushing times which means the battery lasts for fewer sessions.

Achieving total coverage in two minutes seemed impossible in my testing, though a couple of times it only required an extra 25 seconds. On other occasions it was approaching three minutes. 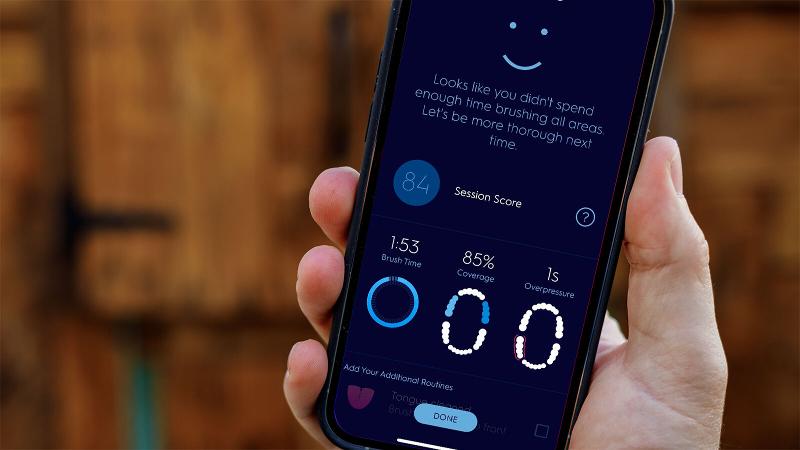 With roughly 10 days of battery life, brushing for a third longer reduces this (obviously) by around a third. That’s not really an issue when you’re at home and can either leave the base plugged into a shaver socket or plug it in when required, but on an extended holiday, you’ll need to take that base with you.

Having used other electric toothbrushes such as the Ion-Sei, it’s a shame Oral-B didn’t decide to make a stand with a USB port on it and the ability to charge from a USB mains adapter or power bank.

However, importantly, the cleaning itself is fantastic and it’s done very quietly. Both qualities are due to the frictionless magnetic drive system which means the brush head offers both oscillation as well as micro-vibrations (a bit like sonic brushes).

And while I didn’t perform any scientific tests to discover exactly how much plaque and dirt was removed compared to other brushes, my teeth felt smooth and exceptionally clean, even using the daily clean mode.

It’s worth knowing that you quickly get used to the vibrations in a day or two. Initially it feels too powerful, but after that ‘break-in’ period, only the intense mode feels like it will rattle any fillings loose.

That’s a good deal for a brush that cleans this well, but do beware that replacement heads are also expensive at around £15 for a pair, and that’s half the RRP. Hopefully these will drop closer to the price of brushes for the Genius range, which unfortunately aren’t compatible with the iO Series.

As well as direct from Oral-B, you can also buy the Series 6 from Amazon, Argos and other retailers. The colours on offer depend upon where you buy, but the full range is: Alabaster White, Black Onyx, Anthracite Grey and Pink.

Oddly, in the US, the RRP is only $149.99, which is much closer to the discounted price in the UK. And you get two Ultimate Clean replacement brush heads in the box instead of the one you get in the UK.

If you’re wondering exactly what that longer answer was that I mentioned at the start of this review, it’s this. While you don’t need a Bluetooth-equipped electric toothbrush with a magnetic drive, there are certainly benefits on offer here.

Not only does it clean teeth very well indeed, the companion app (which worked flawlessly) is surprisingly useful. If you care about looking after your teeth, this is one way of making sure you’re cleaning them properly every time you brush.

Consider it an investment in your health rather than an overpriced gimmick. And buy it when it’s on sale, not at full price.