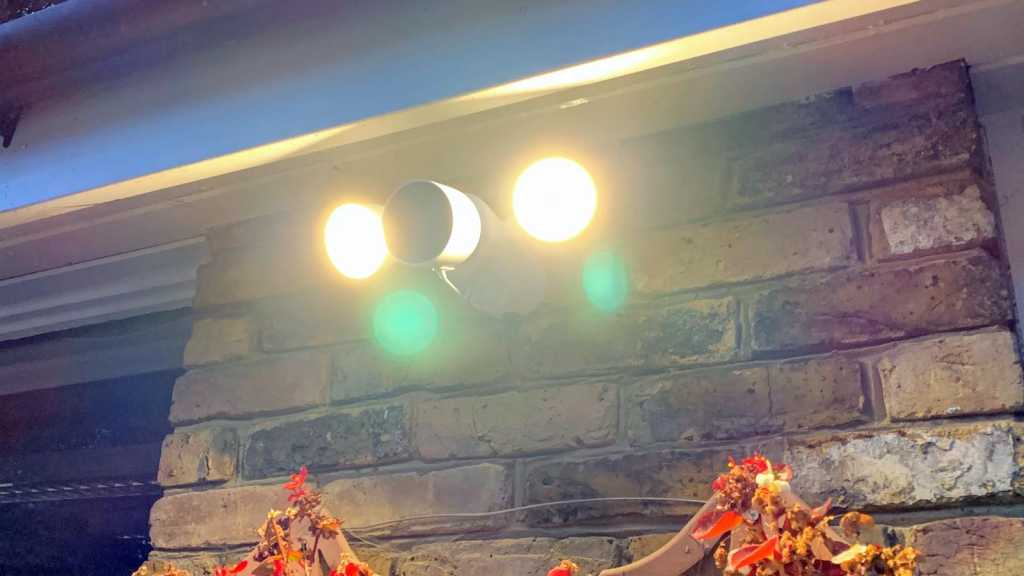 The floodlight means much improved video quality when it’s dark. But it’s expensive, the Google Home app is inferior to the Nest app and you can only control the floodlight with Google Assistant. It’s only a good buy if you’re a die-hard Google fan who doesn’t use Alexa or Siri for your smart home control.

The Cam with Floodlight is the first combined security camera and light that Nest has made. It’s designed to replace an existing outdoor light, and must be wall mounted.

It offers all the same features as the Nest Cam (battery) except that the unit is mains powered and, despite the fact that the camera has a battery, it can’t run exclusively from battery power. It’s there mainly for backup so it can record if there’s a power cut.

This local recording goes hand in hand with the new three hours’ free recording that allows you to see events captured from the past three hours. It’s not much, but it could mean you don’t need to pay extra to subscribe to Nest Aware.

Without the subscription you still get person, package, animal and vehicle detection and the ability to set up motion zones and choose what notifications to receive from each zone.

The small monthly saving may seem irrelevant given this camera’s high price and, if you own older Nest Cams which don’t offer those features for free, you’ll be paying for Aware anyway.

When you open the box, there’s a reassuring sense of quality. The camera and floodlight are solidly built, and all the accessories, including screws and wall plugs are neatly arranged in cardboard.

You’ll need the Google Home app to get the installation instructions, which are provided once you’ve scanned the QR sticker on the front of the camera. As with the Nest Cam (battery) it’s a pain this isn’t on the camera itself as, unless you’re very organised, it’s the sort of thing that’s easily lost and will cause problems if you ever need to set it up again.

The instructions clearly explain how to attach the wall mount, including the tools you need and a reminder to turn off the mains power.

An ‘S’ hook holds the floodlight while you connect the wires using the tool-free Wago connectors, but note that there’s no earth, so a third connector is included to terminate one if present.

The mount twists into place and a security screw helps to prevent the unit being stolen. Likewise, a bolt secures the camera to its power cable (which unlike the Nest Cam (battery)’s faces backwards, not forwards) to stop someone stealing the camera.

Either side of it, the lights have a limited amount of adjustment on their stalks so you can angle them to face forward, up or down or more to the sides. The whole unit sticks out quite a way from the wall, but this isn’t really a problem: it’s just bulkier than most of its rivals.

As mentioned, the camera is the same one you get if you buy a Nest Cam (battery), so it attaches magnetically and has IR LEDs for night vision.

However, because of the twin LED floodlights – which provide 2400 lumens – events captured at night can be in colour and offer a lot more detail than grainy black-and-white footage you get from IR LED lighting.

Being identical to the Nest Cam (battery) means there’s the same set of options for motion detection and notifications. So, you can create one or more activity zones and then choose which notifications to get for each. You can also set what to be notified about in areas outside of those zones, which is essentially the rest of the image the camera can see.

You can also use activity zones to ignore motion in specific areas by disabling all notifications for it. And thanks to the built-in intelligence, the camera can recognise people, animals, packages and vehicles even if you don’t subscribe to Nest Aware.

Not only does this mean you don’t get notifications for random objects blowing around in the wind, it also means you can set zones to watch for specific things, such as ignoring animals and vehicles and alerting you when a person is spotted.

You only get facial recognition if you subscribe to Nest Aware. It works well, too, though it’s arguably less useful on a floodlight camera than a doorbell.

Quality, of course, is the same as you get from the Nest Cam (battery). That’s 1080p HDR footage at 30 frames per second. It’s not the best you’ll get from a security camera, but it’s plenty good enough.

Of course, the big difference is the quality recorded at night. As long as the motion has triggered the floodlights and the subject isn’t too far away, the footage is much clearer than it would be using infrared LEDs alone.

The extra light means the video is in colour and while there’s not the same detail and quality you get during the day, it’s in another league compared to the Nest Cam (battery)’s night vision.

One of the benefits of subscribing to Nest Aware is the option for continuous recording. That’s only available with the more expensive Plus tier, but it means that you don’t miss the start of events as you tend to with the event-based recording. There’s no pre-roll, so clips usually start mid-way through the event.

Because of the battery and internal storage, the camera will continue to record if the internet connection is lost (a bonus compared to older Nest Cams) and even if there’s a power cut.

When power and internet are restored, the video will then be available in the Google Home app.

Note that the three hours of free recording is a rolling three-hour window, not three hours’ worth of events. This is less than ideal, especially as it means you can’t see events that happened overnight while you were asleep: only the three hours immediately prior to you waking up.

As I said in the Nest Cam (battery) review, one of the downsides of these new Nest cameras is that they do not support the Nest app. At all. Older Nest Cams can be viewed from the Google Home app but you can’t see history or change any settings beyond turning them on and off.

So if you’re considering the floodlight because you have older Nest models, be aware you will end up using both apps.

Even if you don’t have ‘legacy’ Nest cameras, the Google Home app simply isn’t as good for viewing and reviewing footage. There’s a timeline view which is horrible to navigate: the ‘Full history’ timeline is what you’ll use.

This can be filtered to just one camera, or by multiple cameras and a specific type of motion. You can download clips to your phone, but there’s no web portal as there is with Nest and the Home app feels too busy and as if the camera features have been bolted on awkwardly.

Google has fixed the flickering preview videos now, but not rich notifications. These should show a image or short animation of the event, but the space is blank on an iPhone and Apple Watch.

In the settings for the camera you’ll find some extra options compared to the Nest Cam (battery). These let you adjust the sensitivity of motion detection (there’s a PIR in addition to the algorithms that the camera uses) and what should turn on the floodlight: motion (i.e. the PIR), live viewing (so it lights up whenever you look at the live stream) and camera events.

You can also choose how long the lights remain on – from 10 seconds to 5 minutes – after motion is detected (the timer will reset if motion is still happening) and how dark it needs to be before the lights will be triggered: there’s a choice of Brighter, Medium, Darker, Darkest.

You can turn on the lights manually – they appear as a separate device in Google Home – and that’s also where you’ll find a slider for adjusting brightness.

Price is another of this security camera’s problems. At £269.99 / US$279.99, it’s a lot more expensive than floodlight cameras from Ring and others. Arlo’s Pro 3 Floodlight Camera is a bit cheaper (it was discounted by 40% at the time of writing) and is battery powered. You can even get a solar panel to keep it charged, and this makes it more flexible than the Nest.

Of course, you can buy it from local retailers as well, such as John Lewis and Jessops in the UK and Best Buy in the US.

Alternatively, if you really want a Nest Cam you could buy the (battery) version and a floodlight mount for it. Wasserstein offers a 3-in-1 floodlight and solar panel for $69.99 which has the same 2400 lumens but, because it doesn’t need mains power, you don’t need to replace an existing floodlight.

Wasserstein will even sell you a bundle including the camera for $229.99, so it’s $50 less than the Nest Cam with Floodlight.

If you already have Google Nest smart speakers and displays, use the Google Assistant on your phone and can live with the high price (and Google Home app), the Nest Cam with Floodlight does a decent job.

Video quality is fine and the floodlight works well and offers just enough control (but not on/off scheduling).

While you might get away without a Nest Aware subscription, many will find the three-hour rolling window too restrictive.

For alternatives, see our roundup of the best security cameras.