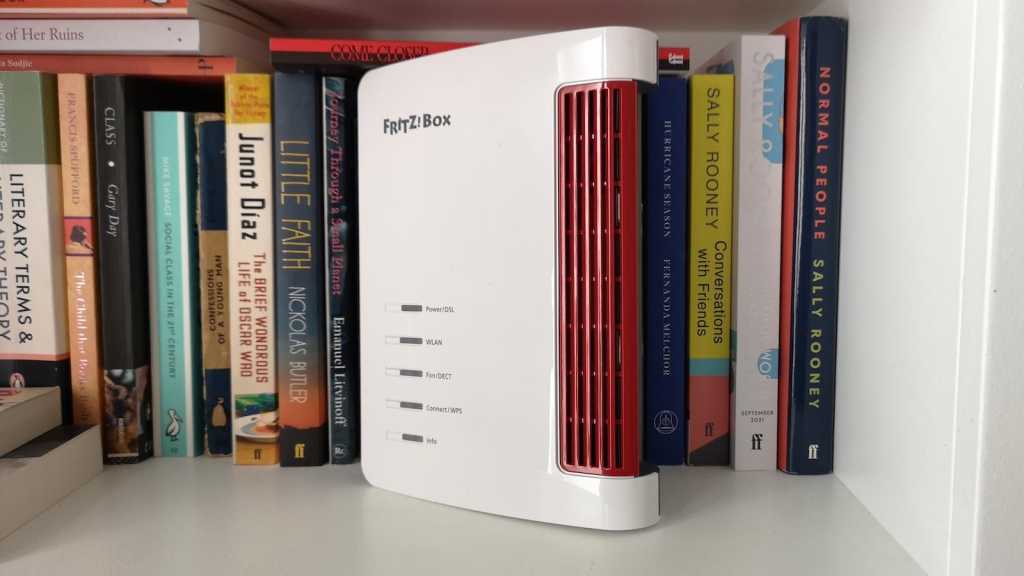 Capable and highly configurable, the Fritz!Box 7530 AX is a solid Wi-Fi 6 router which can be turned to a variety of purposes, and can be set up to suit practically any household. If you’re on a tight budget, or don’t need the extra features, then cheaper Wi-Fi 6 options are available.

The AVM Fritz!Box 7530 AX is a Wi-Fi 6 router. But, as we always say in Fritz!Box reviews, it’s so much more than that. You can use it as a standalone device if you want, but you could also make it the hub of a whole-home mesh Wi-Fi system.

What’s more, the 7530 AX has an integrated modem (which most routers we review don’t) and this means it will work with both old-school ADSL and more modern VDSL services, like the majority of packages available via BT’s Openreach network.

Indeed, Zen Internet customers may recognise this device, as it’s an upgrade of the FRITZ!Box 7530 which comes bundled with some Zen broadband plans. If your service provider uses a different kind of technology – if you’re a Virgin Media customer for example – then the Fritz!Box 7530 AX can be set up to work as a regular router when connected to an external modem. But you’d be better off with a modem-less router if that’s your current setup.

As with older models, the Fritz!Box 7530 AX can support up to six DECT cordless phones, and features a USB port. You could connect a hard drive to this and use it like a NAS drive, too. All in all, it’s a very versatile piece of home networking kit which compares well with 2021’s best routers.

AVM has made setting up the Fritz!Box 7530 AX literally foolproof, as a big card with everything you need to know, including the default SSID and passwords printed on is included.

Once you’ve connected the 7530 AX to the mains and powered it on, you’re then free to connect to it via Wi-Fi. It’s best to do this using a laptop, especially if you want to change all of the default passwords as soon as possible, but you can just as easily set up the 7530 AX using a mobile browser on your phone.

The set-up process is a simple case of following the on-screen prompts and waiting for the device to establish a connection to the internet. When that’s done you then sign in to the control panel and you’re basically done. This part of the process takes no longer than ten minutes.

The desktop control panel benefits from a layout that’s clear and easy to navigate, which is just as well as there are a lot of options at your disposal, and so getting familiar could take some time.

The main Overview gives you a general rundown of what’s happening on your network, including a list of devices that are currently connected, and what throughput speeds each device is getting.

The Internet section lets you configure VPN and DNS settings, and also apply content filters to specific devices. There are no filter presets available (‘gambling’, &’gaming’, ‘adult content’ etc), merely a list of approved and blocked URLs which you yourself can create. It’s a fairly blunt tool, and not a replacement for dedicated parental control software.

A nice feature is that whenever you make any simple changes, such as changing the network name, changing the password, or having the 7530 AX broadcast separate SSIDs for 2.4GHz and 5GHz connections, the router’s software will generate a page with a QR code which you can save and print out should you need to give a copy to other people in the family (or have one handy for visitors).

You can enable guest Wi-Fi access, and there’s even the option of running both private and public guest networks. If you’ve got any devices which support the newer WPA3 encryption standard, the 7530 AX supports this too.

Digging deeper into the settings, you’ll find a separate control panel for managing satellite devices including AVM Fritz! Repeaters, which can form a mesh network, as well as a USB/Storage menu, which allows you to manage the contents of and connections to a NAS drive. You can also tinker with Wi-Fi channels, which is handy if you’re living somewhere where there’s a lot of interference from other people’s networking devices.

AVM also has a side line in Fritz!-branded smart home devices including smart plugs, and smart radiator thermostats. While these aren’t as well known in the UK as brands like Honeywell and Hive, if you’re keen on being able to control your heating and cut down on bills, there’s the option to do that and control everything via your router.

There are MyFritz! apps (iOS, Android) available, which give you access to some of the functions available via the main control panel. While you can do simple things such as see which devices are connected to your home network and block anything you don’t recognise, the apps are otherwise pretty limited.

If you want to tinker further from your phone you can, by tapping the ‘open user interface’ link, which essentially just opens up a window to the desktop control panel in your phone’s browser. This is fine, but it’s not especially well optimised for mobiles.

Likewise, there are Fritz!App WLAN apps (iOS, Android) available too. These let you measure local Wi-Fi signal strength which, arguably, should be built in to the MyFritz! app rather than faffing around with two apps.

Performance is good. It was in line with expectations for how an entry-level Wi-Fi 6 router ought to behave.

Generally speaking, speeds recorded using a number of devices were very good, and coverage, especially on devices with Wi-Fi 6 radios, was also great, better than some other Wi-Fi 6 hardware I’ve tested. But make no mistake, this isn’t a whole-home mesh system without those repeaters.

As good as the Fritz!Box 7530 AX is, it can’t reach every corner of every home on its own – people living in semi-detached houses or big apartments will want to consider picking up a Fritz! Repeater or two. Not having any of these to hand, I can’t comment on how well the Fritz!Box 7530 AX works as part of a mesh system.

What I can comment on is the speeds detected using the WiFi Speed Test Pro app on a pair of Android phones – a Huawei Mate 10 Pro and a RealMe X50 Pro – which feature Wi-Fi 5 and Wi-Fi 6 radios respectively. The tests took place in a two-storey terraced home in London at various distances, one metre away from the Fritz!Box 7530 AX, and another five metres away with a single non-load bearing wall in between.

The Upstairs test is taken one storey up and roughly 15 metres away from the router, while the Garden test is approximately 20 metres away, with two closed doors and two load-bearing walls between the router and the clients. Results below are averages, rounded up:

Like a lot of routers, the Fritz!Box 7530 AX will automatically prioritise the strongest, most stable connection available, even if it’s not the fastest. This means in practical terms, the further you move away from the 7530 AX, the sooner you’ll be bumped off of the faster 5GHz and moved on to the slower (but more readily available) 2.4GHz band.

The Fritz!Box 7530 AX is quite aggressive in this regard, with it often not moving me back on to the 5GHz band on either phone even when I moved closer and stood right in front of it. Toggling the Wi-Fi connection on each device would see me immediately hop right back on to 5GHz, but this is a workaround. I found that prioritising access to the devices from the router control panel didn’t help much with this.

Speeds were generally very good, although, again, this is par for the course for Wi-Fi 6 devices, which are swiftly becoming the norm. Any new phone or laptop you’re likely to buy today will almost certainly have Wi-Fi 6 and, while older devices will still be compatible with newer Wi-Fi 6 routers, you’ll be missing out on benefits like faster speeds and greater coverage.

The clearest difference between upgrading from Wi-Fi 5 to Wi-Fi 6 is coverage improvement. You can see from the results that it’s possible to get usable speeds on Wi-Fi 6 client devices much further away, such as 69Mbps in the garden.

It shouldn’t be a surprise that the Fritz!Box 7530 AX outperforms the Virgin Media Super Hub 3, a legacy Wi-Fi 5 router, on the second test. While this is a slightly unfair comparison, it demonstrates the generational leap between Wi-Fi 5 and Wi-Fi 6 hardware.

The AVM Fritz!Box 7530 AX is available to buy now. It’s certainly not the cheapest Wi-Fi 6 router, but remember it has a lot of extra features.

In the UK, you can buy one for £235 from Amazon, which also sells a number of Fritz! Repeaters, like the Wi-Fi 6-compliant Repeater 6000, which costs £239.94. Alternatively, you could pair it with a cheaper Wi-Fi 5 Repeater 3000 instead, which is £139.99. Again, none of this is what you’d call cheap: the 7530 AX makes the most sense if you already own a compatible repeater or older Fritz!Box, as you can more inexpensively create a mesh network.

Otherwise, if you are keen on the idea of mesh, you could buy an 3-pack Eero Wi-Fi 6 system for only a little more than the 7530 AX. You can read our guide to the best mesh Wi-Fi systems for more recommendations.

The cheapest place we could find to buy a Fritz!Box 7530 AX is Grooves, which was selling them for £183.33 at the time of writing. Be wary of non-UK models when looking, as German / European models may be cheaper but have a Euro plug and different firmware. The same goes for repeaters: they are not available with UK power supplies.

Fritz!Box routers aren’t available in the U.S. and there is currently no sign of when that will change.

The Fritz!Box 7530 AX is not available in Australia, but it should be arriving in the near future. While Australian prices are still to be confirmed, Tech Advisor understands that the RRP for the  Fritz!Box 7530 AX will be similar to that of the European price – €169 – which at the time of writing converts to around AU$265.

There is an abundance of both cheap Wi-Fi 6 routers and mesh Wi-Fi devices available at the moment, and the Fritz!Box 7530 AX sits somewhere in the middle.

Used on its own, it’s a capable Wi-Fi 6 router. Paired with some Fritz! Repeaters, it’s the cornerstone of a whole-home networking system. This means that it’s in competition with the likes of inexpensive Wi-Fi 6 routers like the D-Link DIR-X1560, TP-Link Archer AX50, and Linksys MR7350, as well as mesh systems such as the Amazon Eero 6, TP-Link Deco X60, and the Netgear Nighthawk Mesh WiFi 6.

The Fritz!Box 7530 AX is a lot more versatile than its rival routers, and that’s the key reason (along with the built-in modem which saves you having to have a second box plugged in) for buying it.

If you’ll take advantage of features such as the USB port (for creating a NAS drive) or you need DECT phones and / or the modem, then the 7530 AX should appeal. The fact that the user interface is so simple to use is another plus, although the mobile apps could do with an overhaul.

See other recommendations in our roundup of the best Wi-Fi routers.