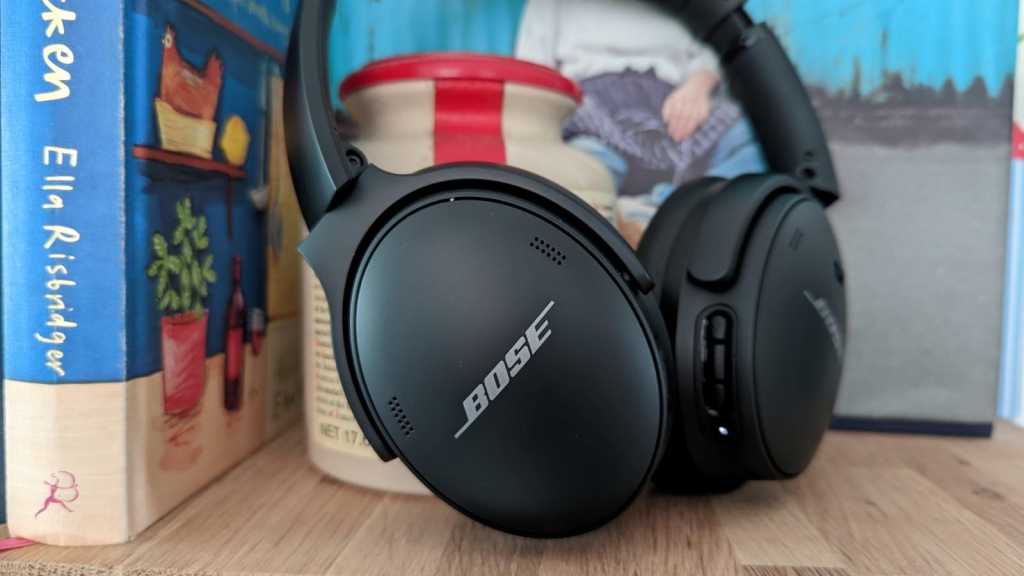 While the QuietComfort 45 are good in many ways, particularly comfort and noise cancelling performance, they are missing a lot of features we’d expect from a pair of flagship headphones.

It’s been a long time to wait, but Bose is finally back with a new flagship pair of QuietComfort over-ear noise cancelling headphones. But are the QC45 worth your hard-earned cash?

The headphones are priced at £319/US$329 and while they keep the iconic design alive in a new much lighter package, with solid ANC and sound quality, Bose has decided to keep things oddly simple here in terms of tech, so you can easily get more for less elsewhere.

The QuietComfort design has been iconic in the headphone world for years so it’s understandable that Bose wanted to keep that instantly recognizable look for the QC45.

Very little has changed here which I think will please Bose fans, but perhaps bemuse onlookers when so much of the technology business is about refreshing and improving. At the end of the day, just decide if you like the style vs rivals or not.

I like the QC45 in this area even if the design does look a tad dated now. There are subtle improvements though with an impact-resistant glass-filled nylon headband combined with durable custom cast metal. Overall, they look neater and more refined compared to the QC35 II.

Importantly, they live up to the QuietComfort name and are easily one of the most pleasurable pairs of headphones I’ve ever tested. The synthetic leather cushions are somehow softer and more pillowy with just enough pressure to stay on but without any sense of clamping.

If you’re looking for premium materials and a flash finish then look elsewhere, but sticking with plastic parts keeps the QC45 extremely light at just 240g (the last model was 310g). If you want headphones for long listening sessions then it doesn’t really get cushier than this.

As per previous models, the QC45 fold up neatly and Bose supplies an oblong carry case to keep them in which also has a small pocket for cables. A small thing that I dislike is that when wearing them round my neck while not in use, the earcup fold away from the body which isn’t as comfortable compared to the opposite. 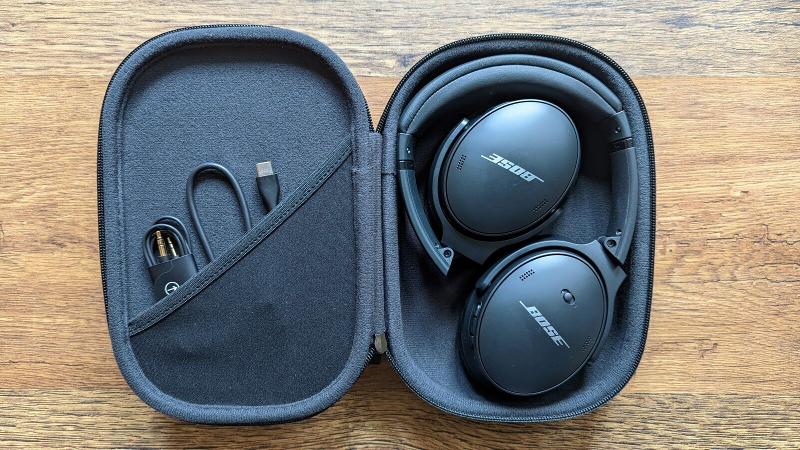 There are no touch controls here but I think that’s a wise move by Bose as they are fiddly and unreliable a lot of the time. Buttons on both cups allow you to easily control power, playback and ANC modes without fail.

Bose is coy when it comes to sharing specs such as the size of the drivers or even the frequency range of the QC45. Whatever is inside the earcups, they sound very good indeed. In terms of known specs, the headphones run Bluetooth 5.1 and the AAC codec. Like Sony’s WH-1000XM4, there’s no support for aptX or aptX HD which is a shame if you have devices that use them.

What Bose does offer is its proprietary TriPort acoustic architecture, which includes vents in the earcups without making them larger. How much difference this makes is hard to quantify but the QC45 do sound very nice with a nicely balanced tuning and an immersive experience. 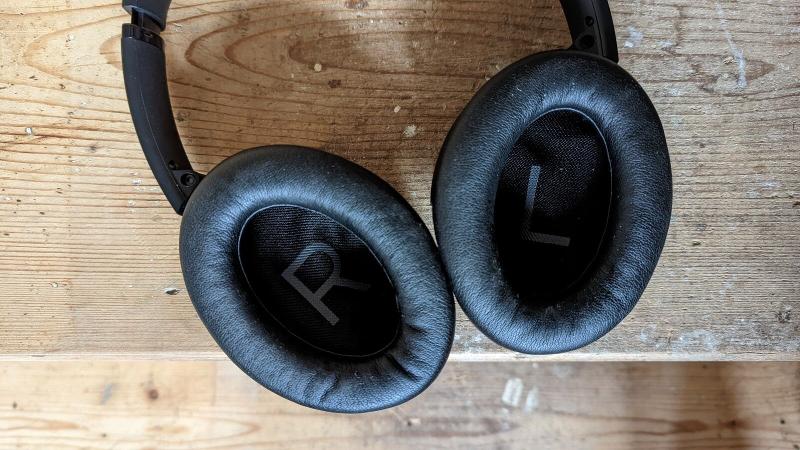 You can get more precise and dynamic sound quality elsewhere but I’m nitpicking there. For the vast majority of potential buyers, the QC45 will sound brilliant. It’s a shame there’s no control over the sound via the app. Instead, Bose employs Active EQ to make adjustments for you – mainly keeping things balanced regardless of how loud or quietly you’ve set the volume.

As per the QC Earbuds, it’s hard to say how much this is doing as it can’t be switched off for comparison but I can say that bass does instead remain present at low volumes and the overall listening experience is consistently pleasant.

When it comes to noise cancelling, Bose has been up there as one of the best for many years. That’s no different here in terms of sheer performance – the QC45 can get rid of what’s going on around you without hesitation.

A new Aware Mode is an obvious addition meaning you can hear what’s going on around you without taking the headphones off. This makes it less dangerous to go for a run or might just make sure you don’t miss a boarding call for your train, to name two examples. It’s pretty much standard for ANC headphones these days and works well here. 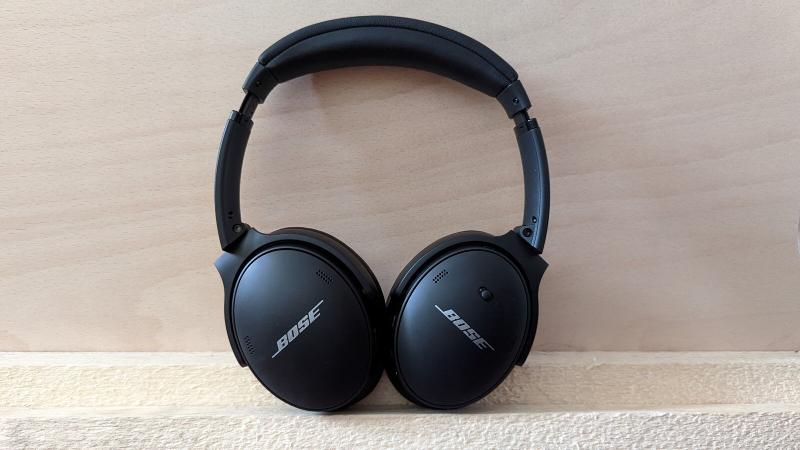 However, there are a few things that I’m frankly confused about when it comes to the QC45. The aforementioned noise cancelling (or ‘Quite’) and Aware modes are the only choices. You can’t turn ANC off, nor can you adjust the level of either mode.

What makes this particularly odd is that this is exactly what you can do on the flagship Bose QC Earbuds and the Noise Cancelling Headphones 700, so why it’s not on these is a mystery to me.

If you’re bothered about smart features, then the QC45 comes up short and doesn’t even offer ear detection to automatically pause or resume your music when you take them on and off. Again, this is something the Bose QC Earbuds do offer.

If we compare to the Sony WH-1000XM4, these offer this plus a whole host of clever technology including the ability to automatically switch between modes depending on where you are or what you’re doing – at home, your favourite café, going for a run and more.

One trick they do have up their sleeve is SimpleSync. This means if you have a compatible Bose soundbar or speaker (which I don’t so haven’t tested it) you can connect the QC45 wirelessly for private listening. Handy if you want to, for example, watch something late at night without disturbing anyone. 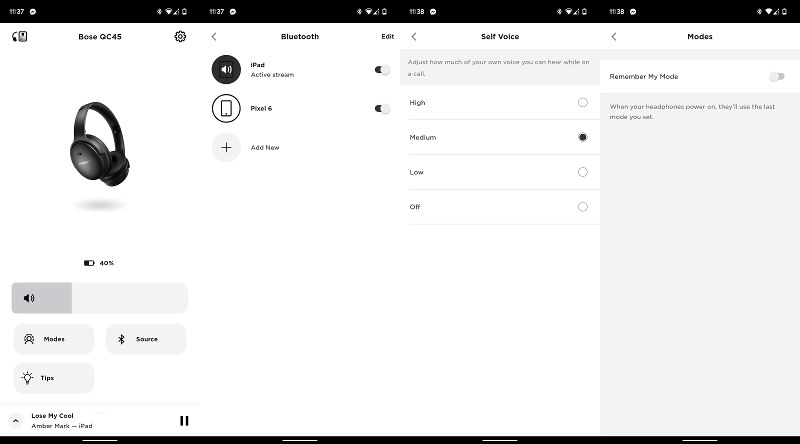 At a more basic level, you can connect to two devices simultaneously and the audio will switch automatically depending on what you’re doing. To avoid confusion, the headphones give an audio prompt when you first switch them on letting you know which device you’re connected to – even if the voice is a little strange sounding at times.

Battery level is another piece of information you get via this method, although if you prefer all prompts can be switched off in the app.

Bose has added a sixth microphone to the QC45 and touts top-notch quality for calls. Using the array of mics and a noise-rejecting algorithm, the headphones can get rid of background noise while you’re talking and it works very well making them a great choice if you take a lot of calls while out and about.

You can also adjust how much of your own voice comes through during a call – high, medium, low or off – mainly so you can avoid shouting due to the passive noise isolation of wearing over-ear headphones.

In terms of battery life, Bose now quotes up to 24 hours of usage with noise cancelling turned on. In my testing I couldn’t get that many hours, even in a fairly quiet office. It’s a little hard to track battery life as the read outs jump in 10% so you could think you have 60% and then 30 seconds later there’s 50%.

On average, I found the QC45 used 10% battery for roughly 2 hours of usage, putting them at a total of 20 hours. Of course, various factors will affect battery life so it will depend on what you’re doing and where but the performance is solid. 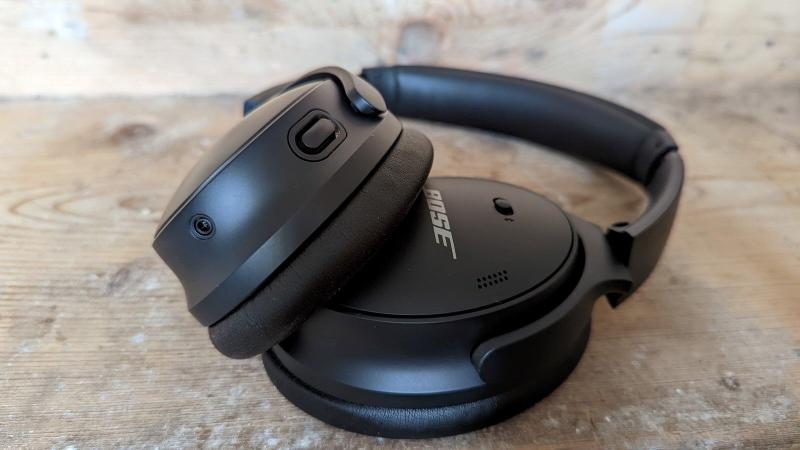 One thing I’m pleased Bose kept in is the option to use the headphones wired. There’s a 3.5mm port on the left earcup and a cable is provided, too. You won’t be able to use features like ANC or Active EQ but it at least means the headphones aren’t useless if the battery runs out.

Charging is now via USB-C and Bose offers three hours of playback with a 15-minute charge.

You can buy them directly from Bose as well as retailers including Currys, John Lewis, Argos and Amazon. In the US you can get them from the likes of Amazon, BestBuy and Walmart.

There are also some under £300/$300 pairs to consider such as the Marshall Monitor II ANC so if you’re not loyal to Bose then you might want to shop around.

If you want a lightweight, extremely comfortable pair of over-ear headphones with active noise cancelling and decent sound quality then the Bose QC45 certainly fit the bit.

Bose has made some odd decisions here though and I’m talking mainly about the lack of ANC control – apart from switching between the two basic modes on offer – and missing smart features like wear detection.

It’s confusing after a five-year wait and the fact other premium headphones from Bose so have these features.

Perhaps a simpler plug-and-play approach might appeal to you but it seems like an odd choice for a pair of flagship headphones. The omissions leave them feeling rather mid-range. If you do want more user control and modern features then you’ll need to look elsewhere, even within Bose’s own range.

The Sony WH-1000XM4 are an obvious alternative and make for an especially attractive option considering they are now widely available at much lower prices than the QC45. They’re only slightly heavier and you needn’t go fiddle with the settings if you don’t want to.