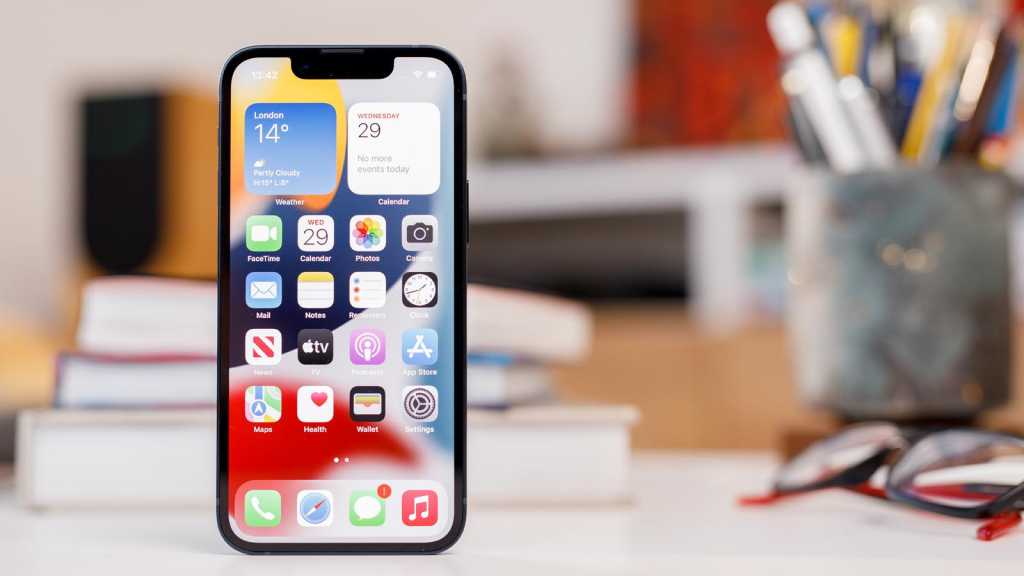 It isn’t a significant update over the iPhone 12 Mini, but if you want a small, light phone and the price and battery life are no barrier, the iPhone 13 Mini is a great choice.

If the figures are true and the iPhone 12 Mini accounted for just 6% of sales during the peak iPhone 12 launch period, then it’s safe to say there’s not a lot of demand for a small phone any longer.

Rewind to the iPhone 4, which launched in June 2010, and its 3.5in screen seemed perfectly normal and usable. Now, just over a decade later, we’re used to phones with near-7in screens. That’s not twice as big: it’s four times the display real-estate available on the iPhone 4.

Of course, the screen-to-body ratio has increased massively, which is why the iPhone 13 Mini can pack a 5.4in display into a device that’s easy to hold in one hand.

It also fits easily into a pocket and is so much lighter than most modern phones you can barely notice you’re carrying or holding it.

That makes it great for the minority of people with really specific needs: those who want a pocketable phone that’s light, powerful, has great cameras, and that they’re happy to spend a lot of money on. Not to mention one that’s made by Apple.

If that describes you, you’re probably weighing up whether to go for the 13 Mini or the 12 Mini, which is now cheaper than it was a year ago. For anyone wondering if they should upgrade from the 12 Mini: no. There’s not enough difference to warrant it.

The most obvious difference between the two mini phones is the choice of colours. Apple has removed the Purple and Green options and added Pink. There’s also a brighter Blue, a bluer Midnight, a white Starlight colourway and a darker Product (Red). And, as of 18 March 2022, you can buy one in the new ‘green’ colour.

It’s easy to laugh at Apple’s decision to orient the rear cameras diagonally, as if that was solely to differentiate the 2021 phone from its 2020 counterpart, but if you care about being seen with the latest device, it is a differentiator.

Elsewhere it’s business as usual with that iPhone 4-esque, square-edged design which was (re)introduced on the iPhone 12 series. If you’re a long time iPhone user, one minor change is that the SIM tray is now on the left-hand side, not below the power button.

It doesn’t make a huge difference, but the screen notch is slightly narrower on the iPhone 13 Mini, while the phone is a few grams heavier and fractionally thicker than the 12 Mini.

If you’re used to a larger, heavier phone, the iPhone 13 Mini will surprise you by just how weightless it feels and how usable it is, despite the screen’s more cramped dimensions.

I was surprised how quickly I adjusted to watching videos and playing games – after a day or two, that 5.4in display felt normal. The only drawback turned out to be typing on the smaller keyboard. Unless you have especially tiny fingers, you’ll have to learn to be a bit more precise about stabbing the screen. Apple’s software does a wonderful job at figuring out where you meant to press, but it seems that doesn’t quite work on the iPhone 13 Mini where ‘o’s became ‘i’s and instead of deleting characters, ‘m’s were being typed.

Unlike in the past where Apple’s smallest phone was cheaper and had inferior specs, the iPhone 13 Mini feels like a Mini flagship.

Its OLED screen is sharp and vibrant with the same wide viewing angles and ability to show HDR images as its bigger siblings.

There is one corner cut, though: it’s limited to 60Hz, just like the regular 13. It doesn’t benefit from what Apple calls ProMotion – a variable refresh rate that goes up to 120Hz – on the Pro and Pro Max.

It’s a relatively subtle difference, but it does help to make scrolling through web pages and social media feeds a lot smoother. Then again, the 13 Mini is also cheaper than the 13 Pro and Pro Max.

Last year, your £699/US$699 bought you only 64GB of storage which is arguably too restrictive for most users. So it’s great news that the iPhone 13 Mini comes with 128GB as a minimum, but you can go for 256GB or 512GB – all capacities are doubled compared to the 12 Mini.

As ever, there’s also a faster processor. In everyday use you probably won’t notice the difference because even the A14 is still a very fast chip.

The iPhone 13 Mini certainly never so much as hesitated during my time with it. Navigating around iOS 15 is flawless, apps launch fast and run smoothly and you can play games to your heart’s content. There’s performance to spare.

In hard numbers, the iPhone 13 Mini is 13% faster than the 12 Mini in Geekbench’s multi-core CPU test. But that doesn’t really give much context.

Yes, these are only synthetic benchmarks, but they’re still a useful indication of relative performance.

Similarly, the iPhone 13 Mini did well in GFXBench’s game tests. Remember that the screen is limited to 60Hz, so 60fps is the maximum achievable framerate when running on-screen tests, as we do.

It’s a disappointment, but only very slight, that Apple didn’t upgrade Wi-Fi to the latest 6E standard: the 13 Mini has Wi-Fi 6, Bluetooth 5, NFC and 5G.

Hardware changes are fairly minimal compared to the iPhone 12 Mini. There’s a pair of 12Mp rear cameras: a main ‘wide’ one and an ultra-wide one. Unlike the Pro and Pro Max, there’s no zoom lens, but if you’re going to have only two cameras, wide and ultra-wide is what you want.

Apple says it has used a bigger sensor for the wide camera that lets in 47% more light, and that the new ultra-wide camera reveals more detail in dark areas of photos because of a ‘faster’ sensor.

One reason for the diagonal arrangement was to fit in the larger sensor-shift stabilisation mechanism that’s used for the main camera. That was exclusive to the iPhone 12 Pro Max last year, but even the iPhone 13 Mini has it this year. It means the sensor moves to compensate for shaky hands (or any movement) instead of OIS, which is where the lens moves. Unlike the Pro and Pro Max, which also get OIS, the 13 Mini does not, so it’s frustrating that Apple insists on calling it “Sensor‑shift optical image stabilization”.

Jargon aside, these are great cameras, and the fact they’re identical to those in the iPhone 13 mean you’re not compromising by opting for the smaller phone.

Hardware alone isn’t the full story, and it’s when you combine it with software that you can get some great results.

In good light, photos are fantastic, and portrait shots add a pleasing blurry background that – on most occasions – looks realistic. The odd wisp of hair might be missed and blurred out, but the overall effect is nice, and it works on the front camera too.

In years past, iPhone cameras were all but useless in the dark compared to the best Android phones, but Apple has caught up and can now compete in low light. There’s no specific Night mode. Instead, the iPhone 13 Mini automatically picks a long shutter speed and instructs you to hold the phone still during the countdown.

It’s able to take some lovely shots, but it has its limitations: leaves blowing in the wind or other moving objects will be blurry as you can see in the foreground of the photo of the Cutty Sark.

Results look sharp enough overall, but don’t zoom in too far as you’ll see the ‘oil painting’ effect: there’s no fine detail. It also tends to exaggerate colour casts, so night photos aren’t the most natural-looking.

HDR has been improved slightly, and it works well, but it’s the new Cinematic Video mode that’s the big news, and it’s great to see it on the Mini and not just on the Pro and Pro Max. Essentially it’s portrait mode for video and allows you to have that movie-style blurred background in your videos.

It will automatically detect faces (and other subjects) and keep them in focus but, better still, the depth effect is non-destructive. That means you can choose where the focus should be when you edit the clips afterwards (in the Photos app), a brilliant feature for anyone that needs or loves to make videos. Plus, it can record video in Dolby Vision HDR.

The bad news is that the Cinematic mode is limited to 1080p at 30fps: it doesn’t work at 4K and, oddly, you can’t choose to record at a cinematic 24 frames per second.

It’s worth noting, too, that there’s no macro mode here, but most people won’t care one jot about that.

Apple knew that battery life was a weakness of the iPhone 12 Mini, which is why it has talked up the improvements it has made for the 13 Mini. The A15 offers (like all new chips) better power efficiency, but there’s also a larger capacity battery: 2406mAh versus 2227mAh in the 12 Mini.

This is claimed to add two hours of extra video playback (three for streaming video) and five extra hours of audio playback.

Obviously, a small phone has limited room for a battery and even with the improvements, this is still a one-day phone. In my testing I found that, on days with moderate use, it would finish with between 15 and 25%. But on days where I used it more heavily, for gaming, video and editing video, it barely made it to bedtime.

This, unfortunately, is a sacrifice you have to make if you want a compact iPhone. If you use a 20W charger, it will charge to 50% in half an hour just as Apple says it will, and there’s also support for 15W MagSafe charging and 7.5W Qi wireless charging.

Note that you don’t get a charger in the box and the USB-C to Lightning cable may not fit any of your existing chargers which tend to have USB-A ports.

In our usual Geekbench 4 battery test – with the screen set to 120 nits – the iPhone 13 Mini managed six hours and 41 minutes, almost exactly an hour longer than its predecessor.

In the UK, as mentioned, the iPhone 13 Mini is a bit cheaper than the 12 Mini was, though in the US prices have stayed the same.

Of course, there are other ways to buy it: you could trade in an existing model and get £80-610 ($110-790) off. These figures serve to reinforce how UK buyers pay proportionally more for their iPhones than US buyers…

Deals on iPhones are always around, too, so have a look at the best places to buy the iPhone 13 Mini.

And don’t forget the iPhone 12 Mini is now cheaper, with the 64GB version costing £579/$599 from Apple and the 128GB £629/$649. Check out our ranking of the best iPhones to see how they compare, or our pick of the best small phones to see a few similarly sized Android options.

In many ways the iPhone 13 Mini is Apple’s best small phone yet. It couldn’t very well not be considering it has the newest processor, upgraded cameras (and the new Cinematic mode), more storage as standard, and a slightly bigger battery.

The only things that hold it back are the shorter battery life than most other phones at similar prices (or less) and the price itself: this is no budget iPhone.

If neither of those is a concern and you don’t want to save a bit by opting for the amazingly similar 12 Mini, then you’ll be very happy indeed with the iPhone 13 Mini.

It’s worth heading to an Apple store or a phone retailer to try one out, though, just in case – like me – you find the keyboard a little too small for comfort.