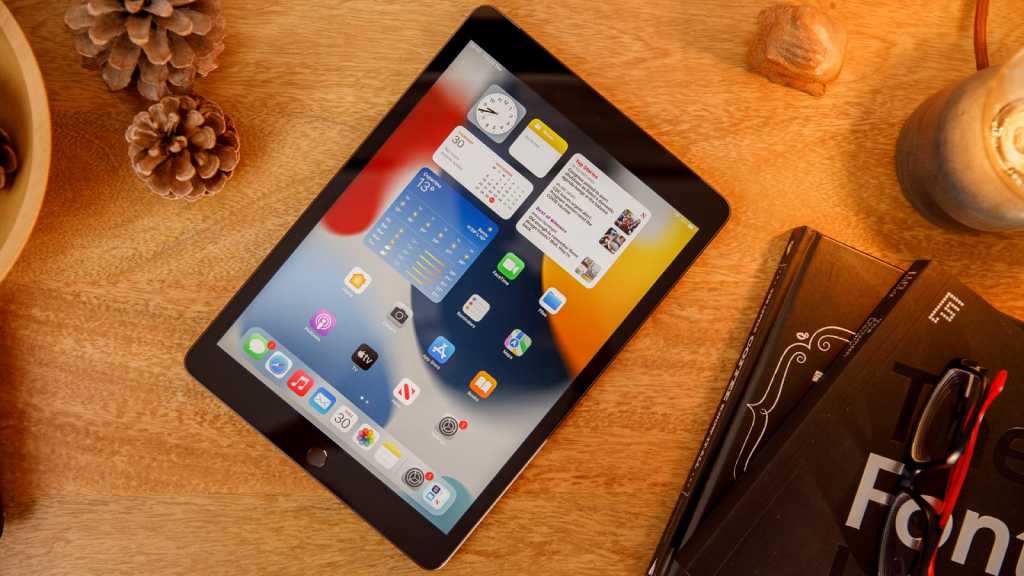 It could do with design refresh but thanks to a number of big hardware upgrades, the regular iPad remains easy to recommend as an everyday tablet for almost anyone. And it remains the same price in the US and even cheaper in the UK to boot.

Firms like Sony and HTC might have stopped making tablets years ago, but the iPad lives on, and Apple has another new version of its 10.2in model for 2021. This classic iPad now comes with a new processor, more storage and improved camera tech.

And it does all this at a new lower price of £319, £10 cheaper than the 2020 iPad 10.2in. However, in the US it still comes in at the same price of US$329. Although there are some things I would change about this regular iPad, it’s yet again the best all-rounder tablet you can buy for a variety of reasons.

This section of an iPad review feels fairly redundant at this point. This is the 9th-generation of the regular iPad and Apple has been using this 10.2 size for three years now.

You would be hard-pressed to pick out the difference if you saw this model with its predecessor as the shape and dimensions are identical. Due to some changes inside, the 2021 model is slightly lighter for the Wi-Fi model, but only by 3g.

One of the only giveaways that this is the new iPad is that the Silver colour now has a black bezel around the screen, rather than white. A change I personally prefer, even if I would pick Space Grey every time anyway.

Sadly, those are the only two colours to choose from this year, with Gold now removed from the line-up. It feels a bit odd, especially with Apple getting more colourful recently with its products including iPhones and the iMac.

And… that’s about it, due to the iPad design being pretty uneventful. All the buttons are and ports are exactly where you’d expect and the bezels around the screen are still thick. It looks a bit dated, but I get that Apple is leaving room to hold the tablet without fingers getting in the way of the screen.

Something I would like is some waterproofing. iPads are understandably a popular device to use by the pool or in the bath but it’s still a risk. Still, build quality is high calibre and Touch ID lives on in the Home button, able to read fingerprints very quickly indeed.

A quick note on accessories here as the iPad 2021 is compatible with Apple’s Smart Keyboard but not the more impressive Magic Keyboard and the Apple Pencil but not the vastly superior second-generation of the stylus.

The original Pencil still charges via an awkward Lightning connector under a cap at the top and if you don’t keep the battery topped up – and I’m speaking from experience here – it will die to the point of being irreversible. Not a good experience at £99/US$99.

Of course, being an iPad, there are a raft of third-party cases, keyboards and styluses to choose from. And anything from the last two generations you have lying around should be compatible.

The screen has been 10.2in for a few generations now so there’s no change there. I’m personally used to a 9.7in iPad and prefer the more compact size but the extra 0.5in is no bad thing.

I would happily take smaller bezels on the iPad at the risk of fingers getting in the way a bit, but at least there aren’t any white bezels now.

This isn’t just the same display as the last model though, as Apple has added TrueTone technology that can automatically adjust the colour temperature of the display based on the ambient lighting conditions.

It’s also more tuned to the sRGB colour gamut and does a great job of colour accuracy, even if it matters less when compared to the use case vs an iPad Pro. Furthermore, the screen is very bright able to reach a whopping 515 nits in my test using a Spyder X.

While this helps you when using the iPad outside in bright sunlight, the glass front is very reflective which can get annoying at times – outdoors or in.

As mentioned earlier, you can use the iPad with the Apple Pencil but only the flawed 1st-generation model rather than the much improved newer stylus which is a shame.

Audio is something that could be improved on the iPad but it’s something that will take a redesign of the chassis. There’s a 3.5mm headphone jack which is great but the stereo speakers are stuck at one end of the iPad, either side of the Lightning port, so you don’t get a true stereo field or very immersive soundscape.

That said, it’s still decent audio quality that comes out even if it does lack a tad in bass. It’s more well-rounded than most rivals and there’s a good amount of power on offer and limited distortion at full volume.

While the outside of the iPad 2021 looks the same, it’s the inside where things have changed with several significant upgrades.

As is fairly customary, the processor gets a bump and is now the A13 Bionic chip (the one from the iPhone 11 and iPhone SE 2020). That makes it two years old, but this is normal for the entry-level iPad and it has plenty of power to handle day-to-day usage.

Note that the other new iPad on the scene, the iPad mini 6, is sporting the A15 Bionic but the pint-sized powerhouse is a lot more expensive.

Many users will find the storage upgrade far more useful as Apple has finally doubled how much you get. This means the cheapest model is now a decent 64GB, which then jumps to 256GB.

Of course, it depends on what you use an iPad for as to which one to plump for, but the base model won’t get full as quickly any longer.

In terms of other specs, there’s a fairly standard array including Bluetooth 4.2 and dual-band Wi-Fi 5 (11ac). Those are both now out of date but I suppose Apple had to keep costs down somewhere considering the raft of upgrades, and these will have far less impact in comparison.

It’s also worth noting that you can opt for a Wi-Fi + Cellular model if you want data on the go. This is limited to 4G LTE rather than 5G which is likely is another way of Apple keeping the price down for this iPad.

For starters, the previous generation had a tiny 1.2Mp camera so 10 times the pixels results in a huge jump in image quality. This is like moving from a cheap laptop to a decent smartphone, although it’s worth noting that the iPad 2021 doesn’t support Face ID or Portrait mode.

Center Stage is Apple’s background machine learning technology that keeps you in the frame during a video call if you move around. It can also pan out if someone else joins in near you. It works with plenty of apps like FaceTime, Zoom, Google Meet and others but you have to switch it on during a call via the Control Center.

It works really well, following you around and does so very smoothly without fuss.

The 8Mp camera on the back is the same as previously. It’s fine if you need to take some pictures of something to sell online with reasonable quality, for example, but is hardly the kind of camera you want to be using to capture holidays or important moments in life.

This is another section that feels a little pointless for an iPad since Apple continues to quote the same old 10 hours of surfing the web on Wi-Fi or watching video.

In the Geekbench 4 battery test, the iPad 2021 managed a solid and entirely expected 10 hours and 22 minutes. Slightly behind last year’s model, but we’re talking a few minutes, so battery life remains unchanged.

The debate about Apple switching to USB-C is ongoing, and although the iPad Pros and latest iPad mini use the universal port, the regular iPad sticks with the traditional Lightning connector for charging.

Unlike iPhones, you get both a cable (Lightning to USB-C) and power adapter in the box. In this case, it’s 20W and charged the iPad 2021 from dead to 19% in our usual 30-minute test period.

As you would expect, the iPad 2021 comes with the latest version of Apple’s software for the iPad range, iPadOS 15.

There’s not really a huge amount to say here considering the iPad experience has been very consistent over the years. This latest version has some interesting elements, including widgets (yes, like the ones on Android) and some nice multi-tasking and productivity improvements.

It’s certainly more suitable to use Split View on this 10.2in display compared to the iPad mini’s 8.3in screen.

Otherwise, it’s the slick and easy-to-use Apple experience we’ve come to expect for a long time now, with all the apps and games you could possibly need.

You can read more about the tablet’s software in our iPadOS 15 guide.

As mentioned at the top, the iPad – in the UK anyway – is slightly cheaper than last year. It now starts at £319 and yet comes with all the upgrades I’ve talked about throughout this review. In the US it’s still $329.

That makes for very good value and really does what the regular iPad sets out to achieve – that is, to be the affordable iPad for the average user who just wants a tablet for a variety of day-to-day tasks like streaming, email, web browsing and more.

The iPad 2021 is available from Apple as well as a range of retailers including Amazon, John Lewis, Currys, Ebuyer, Argos and AO. In the US, look to the likes of Amazon, Newegg, BestBuy, Walmart and Target.

It jumps to £459/US$479 for the 256GB storage model, which makes it a trickier choice considering the iPad mini is not much more. If 64GB is enough capacity for you and the 8.3in screen is big enough, then the new mini has various benefits over this regular iPad.

If you’re still not sure which tablet to buy, check our best iPad and best tablet charts for more options.

The iPad 2021 is the same old formula for Apple, take what works and tweak it in certain places to make it better than the last one.

So, on the one hand, I could criticise the regular iPad 10.2 for its somewhat dated design (now in only two colours) and nitpick about having old wireless standards and speakers at the same end, but the truth is, the average person buying this model from Apple’s range won’t care or likely even notice.

I can really only applaud Apple for adding some sizable upgrades for the same cost, or in the UK, even cheaper than the last model.

Double the storage, a new processor, hugely upgraded front camera and improved screen are by no means small additions.

Overall, this remains the best value tablet on the market and is very easy to recommend. You just might be tempted by the iPad mini if you’re considering the more expensive model of the iPad 2021.