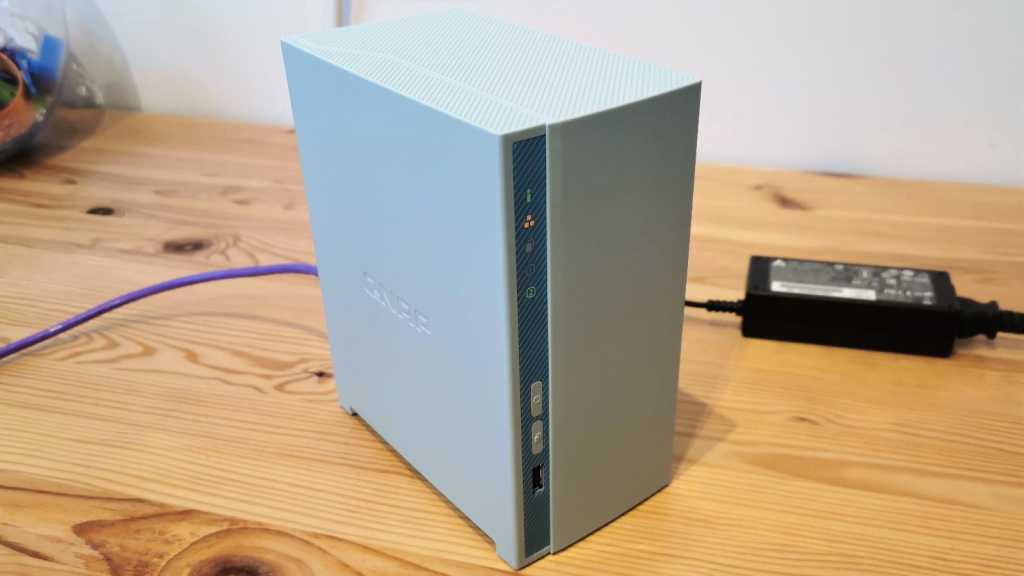 The QNAP TS-230 takes a similar specification to the Synology DS220j and tweaks it for a better user experience. Overall, the TS-230 is a better choice for home users that want a multi-purpose NAS at a competitive price.

QNAP is one of a handful of NAS builders that has consistently countered the dominance of this sector by Synology over the past few years. From relatively humble beginnings, its QTS operating system is now matured and offers an impressive selection of applications.

But the market leader, Synology, has a strategy of releasing a slew of mildly modified designs every year and keeps its customers coming back. In order to wrestle some of them away, QNAP has been forced to price more competitively and match, or better, the specifications of popular Synology NAS drives.

That’s good news for the customer, especially those wishing to embrace something different yet oddly familiar from QNAP.

The TS-230 is an affordable dual-drive option meant for home and small business use that shows what is best about QNAP NAS products and how it might offer a better deal than a comparable Synology rival.

The long succession of NAS that are either silver or black has become tedious, so when this product arrived, and it was duck egg blue, I was suitably delighted.

It might only be a plastic outer shell, but the TS-230 is an attractive design that, unusually for SOHO (Small Office Home Office) NAS, is taller than it is deep. Avoiding the externally accessible bays, this NAS takes the logical approach that once the drives are installed, they won’t be often removed and secures the enclosure with a single locking screw on the underside.

The drive trays are plastic, tool-less for 3.5in drives and screws are provided for 2.5in mechanisms. Installation takes only a few minutes, and then you can use the QNAP Qfinder Pro application, sourced from the QNAP website, to locate the NAS and begin the QTS OS installation.

Depending on the size and number of drives, the NAS should be ready to access within half an hour and you’ll find it pre-installed with a selection of apps that you can easily add to from the web interface. It’s all relatively painless, and the provided defaults get the novice user to a place where the TS-230 can be ready for use rapidly.

The only parts of this process that might mildly confuse those new to the NAS world are the need to create storage pools and volumes once the system is operational. But this job is only generally done once, and some guidance is provided by the interface to take the user through creating these structures.

All configuration work is achieved using a pre-defined Admin account and password, and once you’ve completed that phase and added user accounts, QNAP recommends that this be disabled for security purposes.

The hardware inside the TS-230 bears an uncanny similarity to NAS equipment by other brands. Many of them are built around the same Realtek SoCs and memory combinations, as these chips were designed for this purpose.

The Realtek RTD1296, a quad-core 1.4GHz processor, has been in many NAS drives already, as the Cortex-A53 cores and Mali-T820 MP3 GPU have sufficient performance to handle a wide range of typical NAS tasks.

The 2GB of DDR4 RAM in this design is a decent amount of working memory for applications and the drive management processes to utilise. Considering how some NAS makers tend to pinch the amount of RAM that entry-level boxes get, the allocation for the TS-230 is decent, even if you can’t expand it further.

With two drive bays, there are limited RAID modes available. These include RAID 0 (striping), RAID 1 (mirroring) or JBOD (Just a bunch of drives) where drives aren’t dependent. What isn’t available is RAID 5, as this requires a minimum of three drives. The only redundant drive mode here is mirroring.

The drive capacity that QNAP supports at this time is 18TB, though this may increase once larger drives become available. Two of these drives could provide 36TB of striped capacity or 18TB of redundant mirrored storage.

In addition to that space, two of the USB 3.2 Gen 1 ports are fast enough to connect external USB storage providing extra space to backup the internal drives or be shared alongside those volumes.

The very best performance option is a single 3.5in drive mounted alongside an SSD, with the solid-state storage being used to cache conventional drives operations. It’s recommended that only SSDs designed for NAS use are installed and for network-connected users, it won’t make the read and write speeds any quicker.

In testing, I saw from a single SATA hard drive speeds around 113MB/s, the effective high watermark for Gigabit Ethernet. What the SSD cache does help with are those situations where there are many small files, multiple users accessing different resources and the indexing of multimedia.

The bottleneck is the gigabit Ethernet port, and SSDs won’t resolve those limitations.

The QNAP own-brand OS on this NAS is called QTS, and shortly a 5.0 release will arrive with a new Linux Kernel 5.10. This enhanced OS has gone through Beta and is currently at the Release Candidate stage of development and should deliver enhanced security, performance improvements, along with a host of other benefits.

All my testing was done with the latest stable official release, QTS 4.5.4 1800, the version that is automatically applied to the TS-230 when it is first configured. But, possibly by the time you read this review, QTS 5.0 will become the new active release.

On this specific hardware, QNAP provides a selection of 77 applications that range from software development tools, such as Joomla and Python, to surveillance apps, media management, home automation, backup, security and business applications.

As with most NAS, these are a combination of QNAP branded solutions with distributed partner tools familiar to many Linux distributions. Synology has more applications in total than this, but if the NAS includes the ones you need, their overall number isn’t hugely relevant.

Probably the most important one QNAP supports is Plex, as this allows the TS-230 to stream video storage on the NAS to computers, mobile devices and stream decoding hardware.

I’d recommend Plex, as the alternative QNAP branded Video Station application won’t decode many of the common encoding formats, like H.265, without the purchasing of an additional CAYIN MediaSign license. That’s not a limitation on other versions of Video Station I’ve seen elsewhere and a good reason for using Plex on the TS-230.

Overall, more apps would enhance the QNAP offering, but most users should find sufficiently varied tools for their needs. If you have a specific requirement, it might be worth heading to the QNAP website, where all the supported applications are listed, along with the hardware they run on.

QNAP makes two very similar designs, the TS-130 and TS-230 reviewed here. These have very similar specifications other than the TS-130 has just a single bay, where the TS-230 is the dual drive variant that gets 2GB of RAM over the 1GB in its little brother.

American customers to Amazon.com will find the TS-230 for US$199, while the TS-130 is currently unavailable. Hopefully, it will be back in stock soon.

With the identical Realtek SoC, drive bays and network interface as the Synology DS220j, it’s evident that QNAP designed the TS-230 to compete directly with that product.

What the QNAP TS-230 offers is four times as much RAM, an extra USB port, fewer restrictions on how SATA SSDs are used for almost the exact cost. With just 512MB of RAM on the DS220J, the number of applications it can handle is more limited, and its performance suffers more when many apps are simultaneously loaded.

To get 2GB of RAM from Synology along with this SoC requires the DS218 model, an older NAS that costs nearly £250.

A better value choice might be the TerraMaster F2-210 if you don’t intend to run many applications. It costs £10 less, has the same processor and 1GB of DDR4 RAM.  The app selection on TerraMaster is limited, but If you only intend to use this platform for Plex, or to back up another NAS box, then the F2-210 is a valid option.

And finally, the last NAS box that also uses the Realtek RTD1296 with 1GB of DDR4 is the Asustor AS1102T Drivestor 2. It costs just £150 and has the bonus of 2.5GbE networking. That last feature is only of value to those with a 2.5GbE network, but it is a unique feature the TS-230 can’t match.

Overall, the QNAP TS-230 price matches the Synology DS220j and offers more flexibility for those that want to get more functionality from their NAS.

Not sure which NAS drive to buy? Check our best NAS drives chart, complete with full buying advice.

The hardware in the QNAP TS-230 trumps the Synology DS220j in a few significant places that could make it a much better deal for some users.

In terms of the basic NAS functionality between these platforms, the only significant difference is that Synology uses BTRFS, where QNAP has stayed with the EXT4 file system.

While there are arguments about the superior nature of BTRFS in respect of corruption and unified file systems across multiple drives, these are less compelling on equipment that isn’t Enterprise spec. EXT4 might be old, but it is highly reliable and delivers excellent performance.

Where this NAS wins is the amount of default RAM, I just wish this had been socketed SoDIMM memory as an upgrade to 8GB would have made the DS-230 incredibly agile. But even with 2GB of DDR4, it has the potential to run more applications smoothly than almost all of its competitors.

For the asking price, the QNAP TS-230 is an excellent choice for a home user or small business that want a no-frills NAS to store or secure files centrally and enough flexibility to be repurposed should needs change.