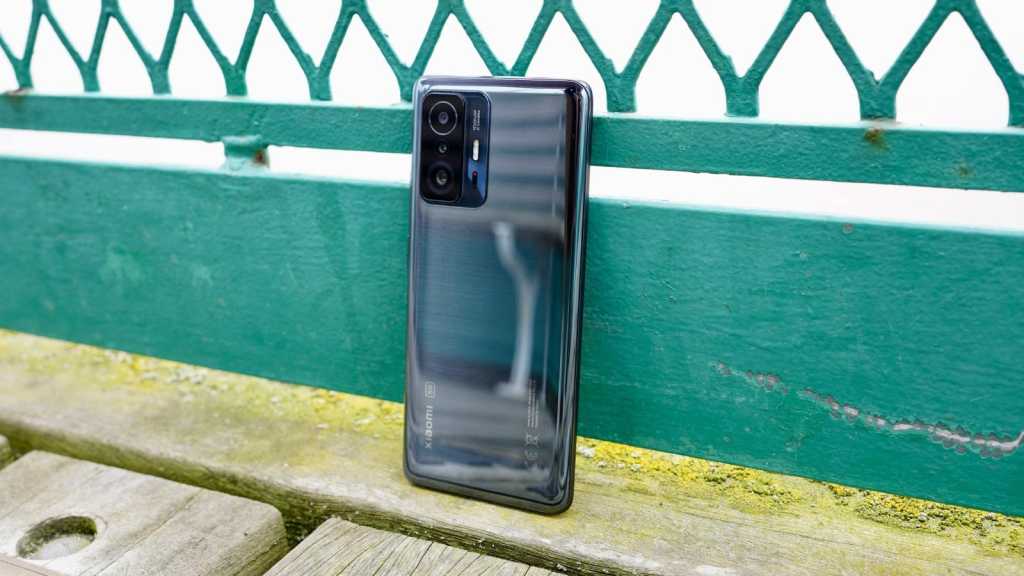 The Xiaomi 11T Pro is another reassuringly capable Xiaomi phone for a highly competitive price. It’s fast, has a solid main camera, a fine display, and outstandingly rapid charging for a reasonable price. However, it’s not without its shortcomings. MIUI is as busy as ever, the camera isn’t as well rounded as we would have liked, there’s no wireless charging, and the design isn’t especially appealing.

The Xiaomi 11T Pro isn’t the half-year spec bump of the Xiaomi Mi 11 you might be expecting given the name. What it is is a very capable upper-mid-range smartphone that competes directly with the OnePlus 9 on price and feature-set.

Despite that fact, much of my praise and many of our criticisms of the Xiaomi 11T Pro ring eerily familiar. It supplies great hardware and top-notch performance at a highly competitive price, but it’s somewhat compromised by fussy software and one or two hardware quirks.

I’m sure I should be more disappointed to see an IP53 water and dust resistance rating in place of a flagship IP68. But as we’ve already established, this isn’t a flagship phone and the Mi 11 didn’t have any IP rating at all.

Like the OnePlus 9, the Xiaomi 11T Pro adopts a solid aluminium frame and a polycarbonate rear cover. That’s fine in principle, but there are different ways to handle plastic, and this one doesn’t seem so sharp.

My model’s Meteorite Gray finish is somehow simultaneously dull and overly shiny, its brushed metal-effect finish set against a glossy fingerprint-attracting sheen. Perhaps the Celestial Blue and Moonlight White models will spare you from the same affliction.

Unimpressive looks aside, the Xiaomi 11T Pro is a very solid, practical phone to use. Its side-mounted fingerprint sensor is extremely fast and responsive, though arguably a little too exposed given that it constantly buzzes at you every time you so much as brush against it.

On the top and bottom edges, you’ll find a pair of Hardon Kardon-tuned stereo speakers, which are impressively loud and clear. There’s no headphone jack, though.

The curious thing about the Xiaomi 11T Pro’s chunky design is that it doesn’t house a particularly large display. At 6.67in, it sits in between the 6.81in Xiaomi Mi 11 and the 6.55in OnePlus 9.

Not that I’m complaining. This is an excellent Full HD+ screen, with all the richness and deep blacks that a modern AMOLED panel can provide.

While I clocked it maxing out at around 414 nits in regular daytime indoors conditions, it’ll reportedly go right up to 800 nits in Sunlight mode (aka high brightness mode or HBM) and 1000 nits in direct sunlight with the auto-brightness on. That’s very bright for a mid-range phone.

Like the OnePlus 9 and the Xiaomi Mi 11, you get a highly responsive 120Hz refresh rate. No, that doesn’t match the 144Hz of the Xiaomi Mi 10T Pro, but that panel was an inferior LCD. This AMOLED kicks it to the curb and 120Hz is plenty smooth, especially if you’re coming from a traditional 60Hz panel.

Also, like the Xiaomi Mi 11, but unlike the OnePlus 9, you get a 480Hz touch sampling rate. You’d have to get into the latest gaming smartphones like the Nubia Redmagic 6S Pro to find a more touch-responsive display. Gamers take note.

It might not have the fancy dual-curved edges of the Xiaomi Mi 11, but you do get maximum Corning Gorilla Glass Victus protection.

The Xiaomi 11T Pro might not be a true ‘Pro’ phone, but it largely lives up to the name when it comes to performance. Qualcomm’s Snapdragon 888 powers it along, making it the equal of top-end 2021 phones like the Xiaomi Mi 11 and the OnePlus 9 Pro – at least on paper.

In practice, an average Geekbench 5 multi-core score of 3495 places it within 200 points of those aforementioned powerhouses, and comfortably ahead of the Exynos-powered Samsung Galaxy S21. A single-core score of 808 felt weirdly low, however, with most Snapdragon 888 phones hitting the 1100 mark. Perhaps there is something in the Xiaomi 11T’s power management set-up or cooling that needs tweaking.

This processor is backed by either 8- or 12GB of RAM, depending on the model (both UK devices have 8GB). Either is ample, quite frankly, as is the storage provision of 128- or 256GB. You won’t be able to expand that amount, however, with no microSD card slot here.

We’re talking marginal gains and losses versus other Snapdragon 888 phones here, unsurprisingly. What counts is how the Xiaomi 11T Pro feels in the hand, and on that count, it’s very fluid indeed.

A weird quirk with GFX Bench at the time of testing meant that I was unable to run through the suite of comparative GPU-based tests that we normally run. We’ll update the review when that becomes possible again.

What I can say is that CoD Mobile runs flawlessly on maximum settings in CoD Mobile, and Highest/60fps on Genshin Impact. The latter did make the phone get a little toasty, but that’s to be expected from a non-gaming phone.

The Xiaomi 11T Pro packs an impressive-sounding 108Mp wide sensor. On closer inspection, however, it’s actually the slightly lesser Samsung ISOCELL HM2 sensor that you’ll find in the Xiaomi Mi 11i, the Xiaomi Redmi Note 10 Pro, and the Honor 50.

It’s a capable sensor, but not the front-runner you might initially assume it to be going by the large number of pixels. It’s also not quite as impressive in a £600 phone as it is in the £300 Realme 8 Pro.

That aside, I was quite happy with the shots I was able to get with the Xiaomi Mi 11T, at least from that main sensor. Shots tended to be ever so slightly punched up, but not to a Samsung level, and more importantly crisp and full of detail. On a slightly overcast day shooting on a murky English pier, the camera brought out the various shades of grey and the sense of depth and perspective quite well.

Meanwhile, Xiaomi’s AI shot assistant is as reliable as ever in picking out the characteristics of a scene, making food look suitably delicious.

Night shots are passable, with a decent level of brightness and not too much noise. But like the Xiaomi Mi 11i before it, the Xiaomi 11T Pro suffers for the lack of OIS (optical image stabilisation), so it doesn’t match up to true flagships in more demanding conditions.

The other cameras aren’t a match for that pixel-packed lead either. On the ultra-wide front you get a mere 8Mp sensor, which yields fuzzier, yellower snaps.

You at least get a dedicated 2X telephoto lens here, which is more than you can say for some phones at this price or higher – including the Xiaomi Mi 11. But this one’s a mere 5Mp affair, and it fails to capture the detail or the dynamic range of that main sensor. It does double as a competent macro camera, though, if that’s your kind of thing.

The 16Mp selfie camera is adequate, but produces slightly flat, lifeless shots. I was quite impressed by its selfie portrait function, though, with decent subject separation and not much in the way of a smudged-out halo effect.

The Xiaomi 11T Pro packs a 5000mAh battery, which is pretty large. However, it’s not quite the stamina champ I hoped for.

It’s not bad by any means. A 15-hour day with around 2 hours of screen on time – what we’d term light usage – brought the battery gauge down to around 50%. But it’s not outstanding, and more moderate and intensive days will see that figure dipping much lower.

This is reflected in a PCMark Work 3.0 battery test score of nine hours and 48 minutes. That beats the OnePlus 9 by around 40 minutes, and the Samsung Galaxy S21 by about one hour 40 minutes. But it also falls well short of the Pixel 5 on 12 hours 34 minutes and the Oppo Find X3 Neo on 13 hours 35 minutes.

Where the Xiaomi 11T Pro’s battery really shines is on charging speed. Xiaomi has packaged in an eye-catching 120W charger, which can get it from 0 to 100% in around 20 minutes. That’s staggeringly quick and comfortably beats even the OnePlus 9 with its 65W charger.

It’s a shame there’s no wireless charging provision, though. Especially given that the OnePlus 9 offered such a thing a solid six months prior.

The Xiaomi 11T Pro runs on Android 11 with MIUI 12.5 layered on top, and it’s as busy and colourful as ever.

There’s ample room for customisation, with a dedicated Themes app and a notification shortcut menu that seems to go on forever. But this also nods to the fact that it can be a bit of a headache finding your way around Xiaomi’s software.

The settings menu has long been a source of dread and confusion, with plenty of opportunities to get turned around. Certain things just aren’t quite where they feel like they should be.

There’s plenty of bloatware here too, including a secondary web browser in Mi Browser, plenty of home-brewed tools, and a host of third-party app installations. Do we really need a whole-page pop up when a new app is installed, too?

At a base level, though, MIUI 12.5 is quick, fluid, and stable. It’s just not as pleasant to use as stock Android, or the custom efforts of OnePlus, Sony, or even Samsung.

The 11T Pro is available to buy now from Xiaomi in Celestial Blue, Meteorite Gray, and Moonlight White. You should also be able to find it on Amazon, which is listed as an “online partner exclusive”.

This pricing positions the Xiaomi 11T Pro against the OnePlus 9, which costs £629 for 128GB. The two phones are quite evenly matched, but we’d probably give the slight edge to the OnePlus for its more rounded camera system (with two decent sensors rather than just one), wireless charging support and more appealing software.

That said, the Xiaomi has faster charging and a dedicated telephoto lens, so it’s not a straightforward pick by any means.

The Xiaomi 11T Pro is a strong upper-mid-range smartphone with decent performance, an excellent 120Hz display, and a capable 108Mp camera. But it’s far from perfect.

Its design is drab and unappealing, its ultra-wide and telephoto cameras aren’t up to much, and MIUI continues to be one of the less appealing Android skins out there.

Conversely, Xiaomi’s implementation of 120W wired charging is certainly eye-catching, and if you frequently find yourself recharging on the fly, there’s no better phone on the market.

A niche selling point, but that is the smartphone market for you.