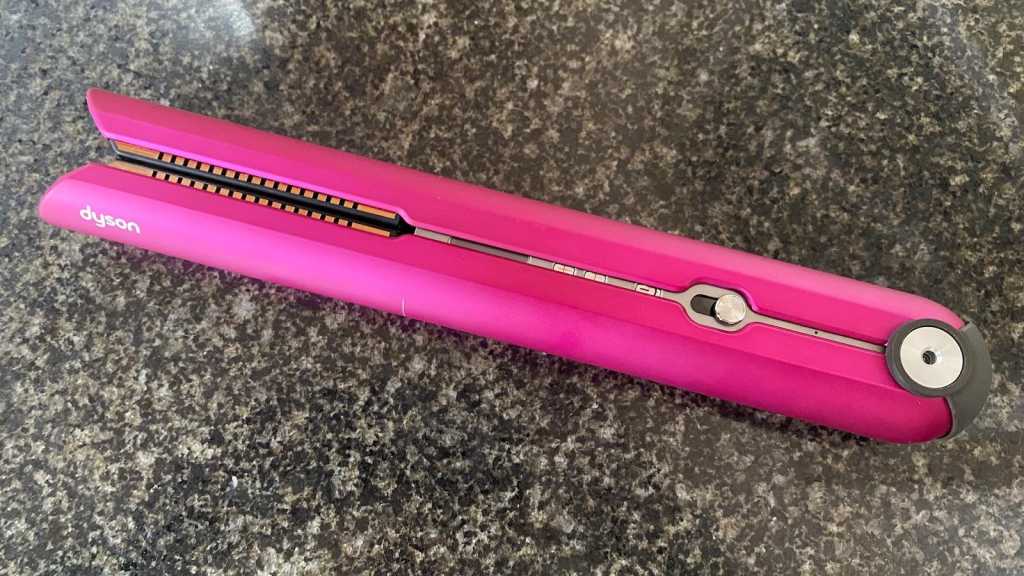 The Dyson Corrale is beautifully made, effective and can be used corded or cordless. But it costs twice as much as competing products and the results it gives aren’t jaw-droppingly different.

The problem with straightening or curling your hair regularly is the potential damage caused by exposure to hot plates. More heat means more damage. Dyson conceived the Corrale as a straightener (and curler) that’ll minimise damage to hair.

If you’re considering shelling out the breathtaking £399.99/ $499.99 that the Corrale costs, chances are this is why. So, the big question is: if you buy it, will it make a noticeable difference to your hair?

At 568g, the Corrale is probably heavier than the hair styler you’re used to – perhaps twice as heavy. The extra weight comes courtesy of the inbuilt four-cell lithium-ion battery that allows it to be recharged. For the same reason, it’s much chunkier than your average straightener as well. You will definitely notice the difference and you might find that it’s hard work to use.

Still, it’s comfortable to hold and its weight, like its solidity, feels like an assurance of quality. It’s beautifully engineered, with plenty of thoughtful details and great features.

Among the best of these are the Corrale’s charging options. It can be used either cordless or corded. Plug the long cable (it’s 4.3m) into the dock and charge up your straightener, or plug it straight into the straightener itself. It charges in 70 minutes and after that, Dyson states that you’ll get half an hour of hair styling. 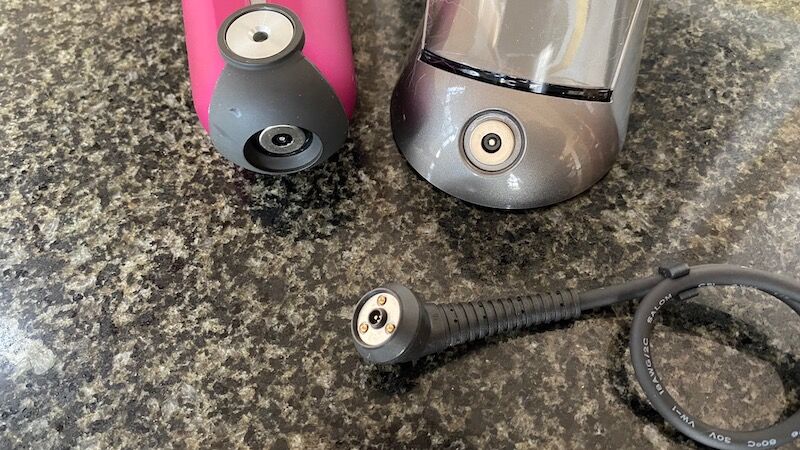 If you haven’t used a cordless hair straightener, it makes a huge difference. You can take yourself to any mirror you want, instead of trying to create a styling station near a plug point. It also gives you a lot more freedom of movement while you’re faffing around with your hair.

I should note that, while testing, I never managed to get the full half an hour before the Corrale began beeping for more power, but it was comfortably over 20 minutes. Still, this may not be enough if you’re attempting a more complicated look with curls.

But, if you run out of charge, there’s no need to wait. You can just plug the Corrale in and continue styling.

The Corrale’s controls are another another sign of how well the Corrale is made. Forget an ugly plastic switch. In its place are three, round, shiny keys: power, + and -. Press the power button and the OLED screen comes to life. First, it displays the battery life, then an animation appears, directing you to press the + key, to choose your temperature setting. 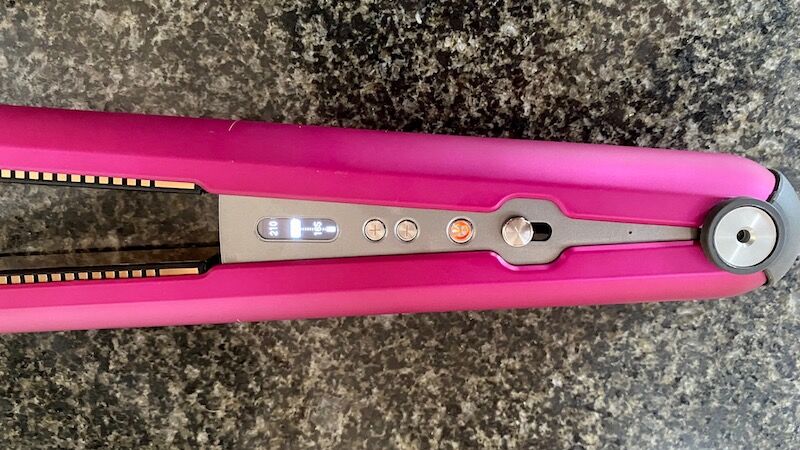 If you’ve used a GHD straightener, you’ll know that 185°C is widely considered to be the hair styling sweet spot, where you can get the maximum effect for the shortest period of use. However, that doesn’t mean that it’s right for everyone, and other options will be better for some people, so the choice of settings is appreciated.

The Corrale heats to your desired temperature in seconds, and the On/Off button illuminates as a visual warning that it’s hot. If you don’t choose a temperature, it won’t heat up. Forget about it for five minutes and it’ll automatically switch off.

It also has a switch to lock the plates together and for travelling, there’s a flight ready tag. Turn it around and it disconnects the battery, so that the Corrale can be stored safely in your hand luggage. Well, that’s the theory, anyway.

In practice, good luck explaining that to an overworked person in the airport baggage check if they decide it’s not allowed in the cabin. Besides, the size and weight of the Corrale make it a less than ideal styler to take away with you.

Dyson envisages that you’ll want to display your Corrale, as it comes with a stand. The stand is not only a handy way to keep a potentially hot hair tool off a surface (it’s a lot more aesthetically pleasing than the more standard black silicone mat) but it also functions as a charger. 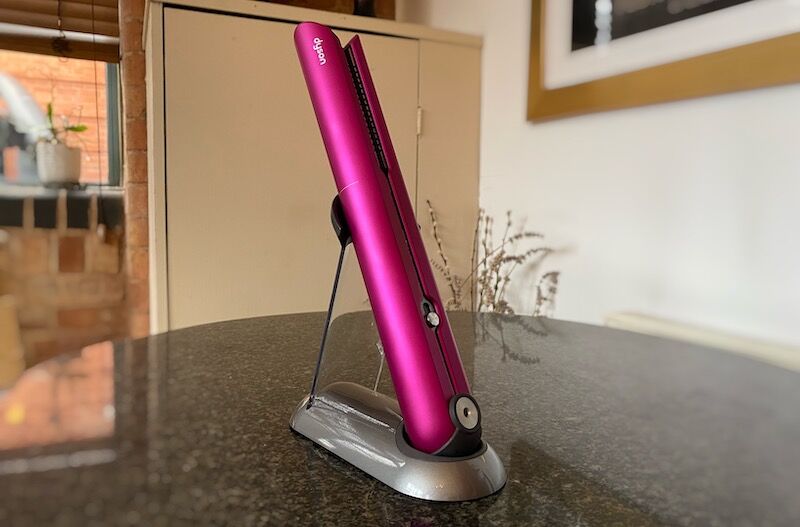 The Corrale’s key point of difference from competitors – and the way it protects hair – is its “floating” plates. The straightening plates aren’t fixed but flexible, to better gather up and fit to the section of hair that’s being straightened. The idea is that better contact with the plates means that fewer passes with the straightener are needed to get good results. And fewer passes means less damage.

I’d read about this technology before trying it myself and when testing it, I found that the flexibility was more subtle that I’d imagined. It’s difficult even to get a photo to illustrate it. Yes, the plates flex slightly, but they don’t wrap around your hair.

When testing the Corrale, I found it to be fast and effective, but not noticeably more so than a high-quality ceramic straightener used at the same temperature.

The magnesium copper alloy plates also carry an ionic charge, which should help with smoothing the hair but when testing a styler like this, it’s very hard to tell what it is that’s working.

So, does it work? Yes, it does. But is it hugely different from using other straighteners? Not in my experience.

The Corrale costs £399.99/ $499.99 and there’s no wriggle room on price, no matter which colour scheme you buy. But if you’re in the UK, to get the best value, you could opt to buy a Corrale gift set. You can currently buy one in the new Prussian blue and copper colour scheme. As well as the straightener itself, cable, dock and heat-resistant travel pouch, which you get with every Corrale, it also contains a paddle brush, detangling comb and presentation case.

If you’re considering spending this much on a hair straightener, it should look good. You’ll be glad to know that the Corrale now comes in a range of colour options. If you’re in the UK, you can buy it in the original black nickel and fuchsia colourway, as well as the newly launched fuchsia/ bright nickel, which is the model we’re testing, and bright copper/ bright nickel.

If you’re not a fan of the bold colours, the Prussian blue/ copper model mentioned above is more muted – at least by Dyson standards.

There are fewer colour options in the US, where you can choose between black nickel/ fuchsia or black/ purple.

The Corrale is far and away the highest quality hair straightener I’ve used, in terms of build quality, at least. It’s beautifully made, with all of the features you could possibly want. This, I think, is the best reason to buy it.

With Dyson products, it’s rarely a case of need and more of a case of want and, where the Corrale is concerned, it feels doubly so. Any difference between the Corrale and other high quality straighteners on the market is subtle. If you straighten your hair very often, you may notice a difference over time. But the truth is that most people probably won’t.

It’s also not a flawless product. As well as its price, you also need to factor in the Corrale’s weight and considerable size to determine if it’ll be worth it to you.

For more hair styling options, have a look at our round-ups of the best hair straighteners and the best hair dryers we’ve tested.