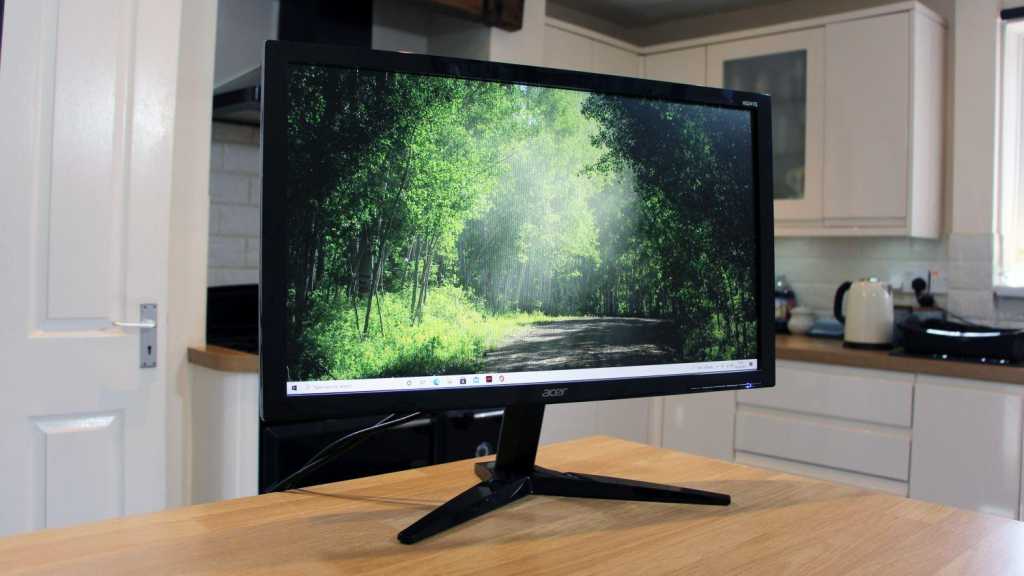 The Acer KG241Q is affordable and has enough quality for basic everyday tasks, but it lacks good colours and doesn’t have many features or options elsewhere – so it’s only suitable if you need an entry-level display.

The Acer KG241Q is one of the most affordable big-brand monitor on the market today – in the UK you’ll only have to pay £113 for this 24in display, and in the US it’ll set you back a modest $125.

That’s pocket change for a proper screen, and that makes the Acer a tempting option if you need a decent display without shelling out loads of cash.

The downside, though, is that cheaper products usually miss out on features, and they often suffer in terms of quality too – so let’s see if the Acer KG241Q can buck the trend.

Acer’s panel looks and feels like a product from the more affordable end of the market. It doesn’t have the slim bezels and sleek metal associated with pricier displays, and instead relies on thick bezels and dated, glossy plastic. The stand is basic, and at the rear there’s an underwhelming plastic panel.

The plain looks are joined by middling build quality – there’s noticeable movement in that rear panel, and the KG241Q wobbles too much. The thick bezels also mean that this display isn’t suitable for use in a multi-monitor setup.

When the Acer is sat on your desk, though, it’s inoffensive enough and those build quality issues aren’t going to be a problem if the display is never moved or touched. The weight of 4.42kg isn’t bad, and the display is 567mm wide and 61mm deep, so it doesn’t take up much room.

It’s easy to get going, too. The small stand clips into place with a tool-free mechanism and the base attaches with one tool-free screw. Don’t expect much adjustment, though: the display has 20 degrees of backwards and forwards tilt and it supports 100mm VESA mounting, but that’s it – there’s no height or swivel movement and you can’t use this display in portrait mode.

Buttons located on the bottom bezel control the display. They’re a bit wobbly, but they’re serviceable, and arguably easier to use than a joystick around the back of the screen. The on-screen menu is basic and slow, but it does have all of the options you need for mainstream adjustment, from colour tweaks to switching between different screen modes.

The Acer KG241Q pairs its modest design with a simple set of specifications. The underlying display uses TN technology, which is the cheapest way to produce a flatscreen display these days. However, TN panels suffer in terms of colour accuracy and viewing angles when compared to VA and IPS screens.

The 1,920 x 1,080 Full HD resolution is fine for everyday use, but you’ll struggle if you want to view more than two windows or applications concurrently. The Acer supports 8-bit colour rather than 10-bit colour, so the Acer can’t tackle colour-sensitive tasks.

This isn’t the screen to buy for high-end gaming, either. While its 1ms response time is good, its 75Hz refresh rate is mediocre. The Acer uses AMD FreeSync to deliver smooth movement in everyday applications and casual games, but it doesn’t have the speed to make esports titles run quickly and it’s not got the quality for the top single-player experiences either.

At the rear, you’ll find two HDMI inputs and a VGA port, which could be useful when connecting older devices, but the KG241Q doesn’t have DisplayPort and it has no USB ports. There’s no headphone jack and no speakers.

The entry-level TN panel only has enough quality to handle everyday situations. Out of the box the Acer served up a brightness level of 237 nits and a black point of 0.2cd/m2, and those figures contributed to a contrast ratio of 1,185:1.

Those figures were maintained with the panel at half brightness, and the KG241Q hit a maximum brightness level of 313 nits – perfectly good for indoor use.

Those satisfactory results gave way to more ordinary performance. The delta E and colour temperature figures of 2.68 and 6244K are fine but hardly outstanding, and the panel’s sRGB coverage level of 89.2% is mediocre.

TN panels aren’t particularly good at rendering colours, so colours on the Acer look harsh and cold rather than nuanced and vibrant. The various extra screen modes don’t help, either: they tweak the brightness and colour attributes, but none improve on the factory settings.

Unsurprisingly, viewing angles aren’t much cop – move to the side of the display and you soon lose contrast and accuracy. The panel also lost up to 16% of its backlight strength in the corners, which is poor for such a small screen.

The Acer’s TN panel delivers decent contrast, but it has mediocre colours, uniformity and viewing angles. Overall, it provides enough quality to handle web-browsing, watching online video and working in Office apps, but that’s about it – the Acer doesn’t have the accuracy, depth or refinement to tackle colour-sensitive workloads.

You’d also get more satisfying results in those everyday tasks with an IPS or VA panel, too, just because those screens will provide more depth and warmth.

The KG241Q that we’ve reviewed costs £113 in the UK and US$125, and it’s the most affordable display in Acer’s KG1 range. If you’d like to find the screen we’ve reviewed here, use the model number UM.UX1EE.006.

There are two other 24in models in this range. The next option is the KG241QBM, which costs £114 and can be found using part code UM.UX1EE.001. It’s the same display as the one we’ve reviewed here, but it has a pair of 2W speakers for extra media ability.

The third 24in option is the KG241QS, which uses part code UM.UX1EE.S01. That panel is better-suited to gaming thanks to its 165Hz refresh rate and the addition of a DisplayPort connector, but it does cost £159 and US$199.

Of course, switching to IPS technology will deliver a significant increase in image quality, but you’ll have to pay a bit more for a 24in panel with that sort of hardware. If you want to match our KG241Q’s size and specification but get IPS instead of TN, expect to pay around £150 or $150.

If you’re still unsure, head here for our verdict on the best monitors for every budget.

The Acer KG241Q is one of the cheapest 24in monitors on the market right now, and it has enough contrast and quality to handle everyday workloads. You can use Office apps, web browsers and media sites here without any issues.

The low price does mean that the Acer doesn’t have the quality to make everyday imagery look truly great, and it’s not good enough for colour-sensitive workloads. It lacks features, adjustment options and sleek design, too.

But if you need a no-nonsense screen for everyday situations and you don’t need something large, stylish or particularly accurate, then the Acer will get the job done.