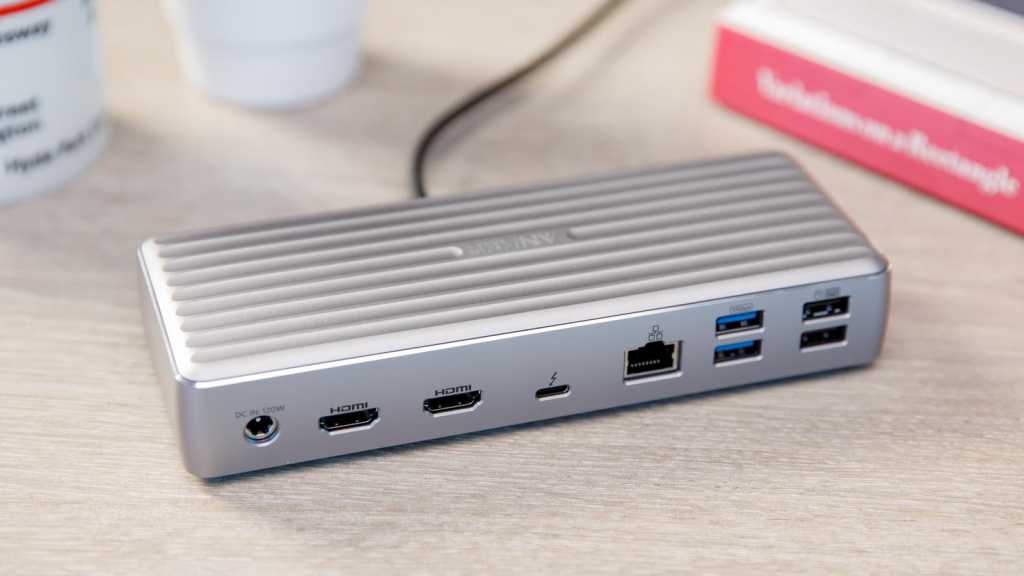 A well-priced dock with two HDMI ports for adding up to three external displays to your laptop.

Thunderbolt 4 is pushing aside Thunderbolt 3 and USB-C, as the backwards-compatible and future-proof connecting technology you should be placing your bets on.

Anker is a well-known brand that makes one of our favorite Thunderbolt 3 (TB3) docks, the PowerExpand Elite 12-in-1 Thunderbolt 3 Dock.

Its Apex Thunderbolt 4 Docking Station has a few surprises and will appeal to people looking to add multiple external displays to their laptop setup.

The upstream Thunderbolt port can supply up to 90W of power to your laptop, while the downstream port can charge other devices at 15W.

The total power supply is 120W, so leaving 30W to power connected devices when charging a laptop at its full 90W.

At the front, there’s a 10Gbps USB-C port that can fast-charge at an impressive 20W.

On the back, there are four USB-A ports: two at 10Gbps and two less-able USB 2.0 at 480Mbps. The weaker two will be fine for wired keyboard and mouse, or any device that doesn’t require fast data transfer but we would have preferred at least 5Gbps USB 3.2.

All four USB-A ports charge at 4.5W, which is underpowered compared to other docks that often have USB-A ports that can charge at 7.5W. Anker even states these are “data only”.

We were surprised at the shortage of Thunderbolt 4 ports. TB4 can support up to four on a hub or dock (one upstream, three downstream), and that’s what you find in Anker’s own PowerExpand 5-in-1 Thunderbolt 4 Mini Dock. Why does the full, non-mini dock have just two TB4 ports?

The answer is probably space and power supply—three connected and charging TB4 ports will demand 45W of power, which would require a larger power supply.

And the space where we would have expected the other two TB4 ports to go offers something we haven’t seen on a Thunderbolt 4 docking station before: two HDMI ports to connect to external displays.

Other TB4 docks we’ve tested have relied solely on the Thunderbolt 4 ports for display connections, or have just one HDMI or DisplayPort.

Anker’s inclusion of two HDMI ports is less flexible than we’ve seen elsewhere—where the TB4 ports can be used for display or whatever else you desire—but will please HDMI display owners, who won’t need to buy extra USB-C-to-HDMI adapters.

The sole downstream TB4 port can also be used to connect an external monitor, so it’s possible to have as many as three displays running out of the dock: two HDMI and one TB4.

There is one problem for Mac users, though. As the Anker dock supports three displays on Windows it is using MST hub (Multi Stream Transport) to do this, and macOS does not support MST hub and can support only two video streams.

As a result, a connected Mac could use both HDMI ports only for Mirrored and not Extended displays. To support two external displays in Extended mode, you need to use one of the HDMI ports and the sole remaining downstream TB4 port.

That means that for Mac users one of this dock’s ports is useless unless you want to have two displays in Mirrored mode and there’ll be no spare TB4 port.

One other Thunderbolt 4 dock that has an integrated video port is the Caldigit TS4, which has one DisplayPort and therefore only two downstream TB4 ports; read our Caldigit Thunderbolt Station 4 (TS4) review. It is still a better choice for Mac users than the Anker dock as no port is left unused.

Display options include connecting a single monitor: 8K at 30Hz via the Thunderbolt 4 downstream port, or two 4K at 60Hz via either the HDMI ports or one HDMI and the TB4.

You can even connect three 4K monitors to a Windows laptop using the HDMI ports (both at 30Hz) and 4K at 60Hz via the Thunderbolt 4 downstream port.

Note that Apple’s M1 Macs support just one external display, and you’ll need to install third-party DisplayLink software to connect three monitors on an Intel Apple laptop. DisplayLink is also the solution to the riddle of how to get more than one display using an M1 MacBook.

Also on the front of the Anker dock is an SD Card slot for affordable portable storage, a combo 3.5mm Audio In and Out jack, and a power button.

Anker seems to be the only manufacturer to add a power button to its docks, and I applaud this as leaving a laptop permanently charged doesn’t do its batteries any good.

On the back with the dual HDMI, quad USB-A, and TB4 port is Gigabit Ethernet for fast, stable wired Internet access—something else you won’t get on a simpler Thunderbolt 4 hub.

The dock works with Windows 10 or 11 laptops equipped with Thunderbolt 4 (not Thunderbolt 3), and Macs running macOS 11 (Big Sur) or later. Anker warns that it doesn’t work with M1 MacBooks, which is very odd indeed—and, on further investigation, turns out to be incorrect. We know there’s a frustrating one-monitor limitation for the M1 MacBooks so maybe M1 owners wouldn’t fancy this dual-HDMI dock anyway, but it will work with the one-display frustration – just like any other docking station.

While Anker’s TB3 dock is a compact vertical format, its TB4 dock is slim and horizontal, although you can purchase a separate, if overpriced, stand ($29.99; £19.99) that sits it upright to save desk space.

It’s a good-looking dock that, like most others, unfortunately, places the upstream computer-connecting Thunderbolt 4 port on the front, which, in my mind at least, spoils the look and the required cable gets in the way.

Anker isn’t alone in this, so there’s no real alternative right now, except for the Caldigit Thunderbolt 4 Element Hub (with four TB4 and four 10Gbps USB-A) that situates the upstream TB4 port on one side.

This is over $100 more than a more basic Thunderbolt 4 hub but does boast many more ports, such as Gigabit Ethernet, SD Card reader, audio jack, and let’s not forget those two HDMI ports.

The Apex ships with a 2.3ft Thunderbolt 4 cable.

The Anker Apex TB4 dock raises eyebrows with its sole downstream Thunderbolt 4 port, but it makes up for this with its two HDMI ports. If your external display setup uses HDMI rather than USB-C monitors, this may suit you better than a dock with three downstream TB4 ports that will require display adapters but we wouldn’t recommend this for Mac users who can’t use both the HDMI ports.

The USB-A ports are underpowered if you need to charge connected devices.

Compared to similar docks, it’s a well-priced—although we would have appreciated the stand being part of the package—with everything you’d expect of a laptop docking station and powerful laptop and device charging capabilities.