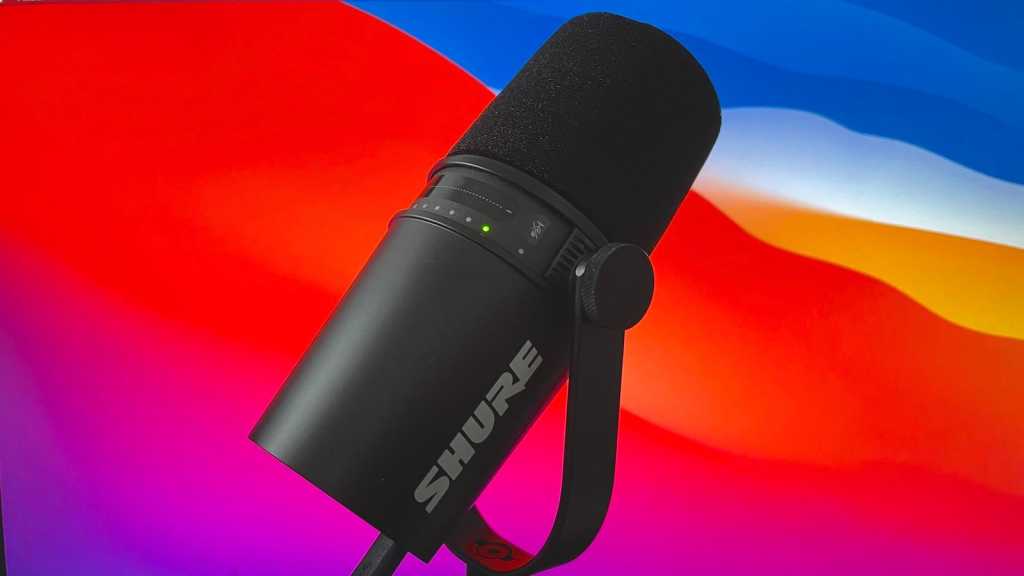 The Shure MV7 is a capable dynamic microphone with great audio quality and support for both USB & XLR, plus compatibility with multiple platforms including iOS and Android make it a tempting option for those on the go. It’s just a little on the expensive side, and you’ll have to adjust to touch controls too.

The Shure MV7 is a great dynamic microphone not only for beginners getting into the world of podcasting and streaming, but thanks to hybrid USB & XLR connectivity, it’s a viable option for more advanced users too. But, with an RRP of £259/$249, it’s not the cheapest microphone on the market.

Has Shure done enough to tempt consumers? It’s not a clear-cut win, but there’s certainly a lot to love about the Shure MV7. Read on to find out why.

The Shure MV7 is an impressively compact dynamic microphone, coming in thinner and shorter than the Blue Yeti X and a particularly strong contender if you’re short on desk space.

The professional all-black aesthetic means it won’t draw too much attention either – though streamers may prefer something a little more ‘in your face’ like the Trust GTX 258 Fyru with its integrated RGB lighting. That said, the all-metal chassis of the MV7 looks and feels solid.

Like practically every other microphone, the MV7 sports a 5/8” screw mount for mounting onto stands and boom arms and a 3/8″ adapter in the box for maximum compatibility. Shure offers a (slightly more expensive) bundle that includes a Manfrotto PIXI tripod for entry-level users, but we’d recommend investing in a dedicated boom arm if you’re looking to get into podcasting or streaming. 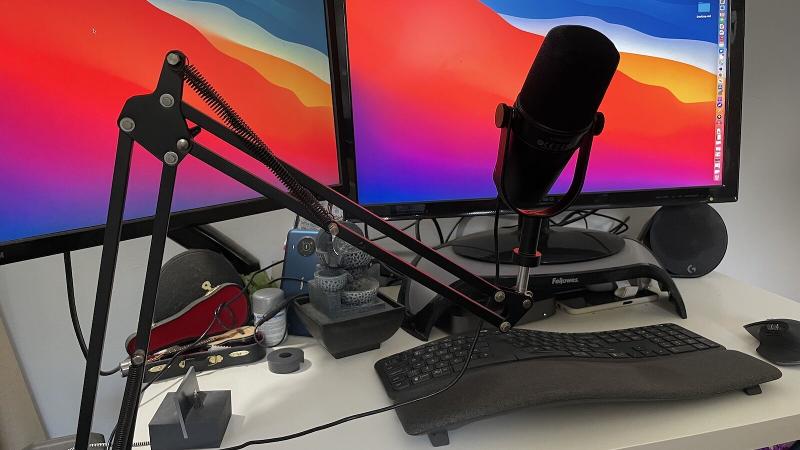 The yoke mount allows for easy angle adjustment, but be sure to tighten the microphone into place before you begin recording.

One thing you’ll likely notice compared to most other microphones in our chart is the lack of dials and switches. In its place, the Shure MV7 features a touch panel with an accompanying strip of LED indicators to indicate current gain levels.

The swipe interface is used to control gain and headphone volume, and there are also touch-sensitive buttons to mute the mic and switch between mic and headset controls, but for anything else you’ll have to download the ShurePlus MOTIV app – a little more on that later.

It’s certainly lacking compared to the likes of the Samson G-Track Pro with a bevvy of physical controls for on-the-fly adjustment, but it’s not necessarily a dealbreaker for someone just getting into streaming or podcasting. Despite initial worries about tap and swipe gestures being picked up by the microphone during recording sessions, it wasn’t something that we experienced once during testing. 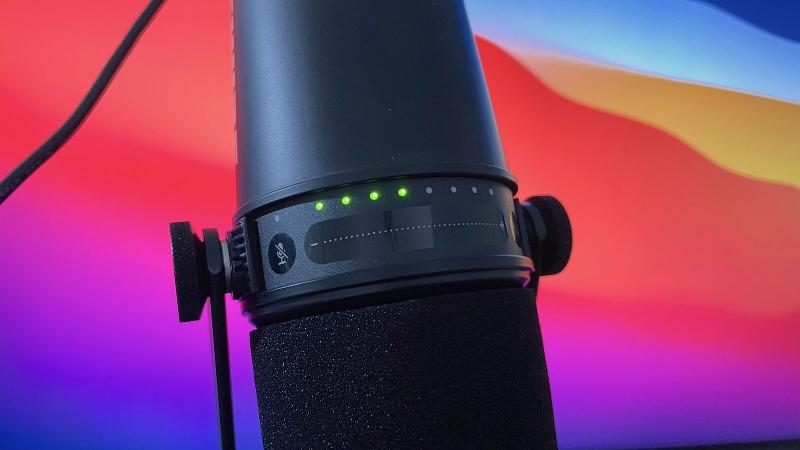 One of the main perks of the Shure MV7 is that you don’t need to choose between XLR and USB connectivity, with both an XLR and microUSB port found at the bottom of the device alongside a 3.5mm headphone jack for monitoring. This provides a great level of future-proofing, allowing entry-level users to connect via USB and then upgrade to an XLR setup further down the road, but it goes much further than that.

You see, it allows you to record in both XLR and USB at the same time, providing a low-res file from USB and a high-res file from the XLR. This not only works as a backup system in case the XLR system fails, but if you manage to get a perfect take, it’s already digitally compressed and ready for sharing. 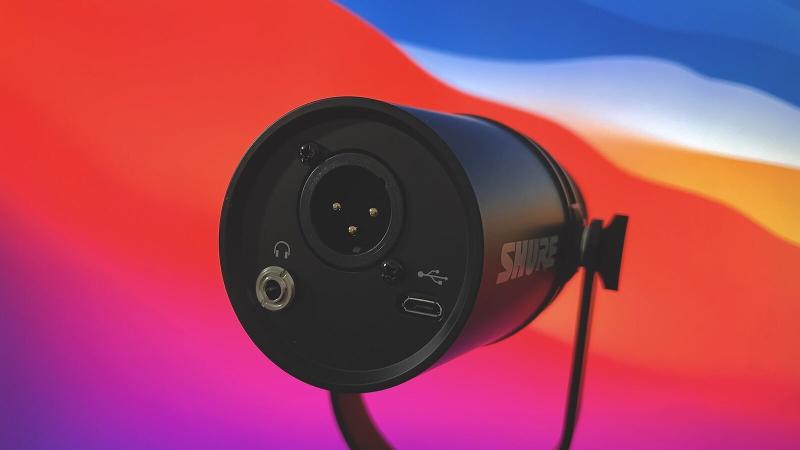 The microUSB to USB-C cable, included in the box alongside the microUSB to USB-A cable, allows you to connect the mic directly to a USB-C enabled Android or iPad, and you can pick up a microUSB to Lightning cable separately for iPhones and older iPads.

This makes the Shure MV7 impressively versatile, allowing you to record on your smartphone or tablet if you haven’t got a desktop or laptop handy – ideal for podcasters that want to conduct interviews on the go.

The Shure MV7 is a dynamic microphone with a single carded pickup pattern. That might seem a bit limited compared to the likes of the Blue Yeti X, but it’s a popular choice for those that record podcasts and stream online, allowing you to place the microphone in front of you and have it capture your voice without picking up sounds from behind it. 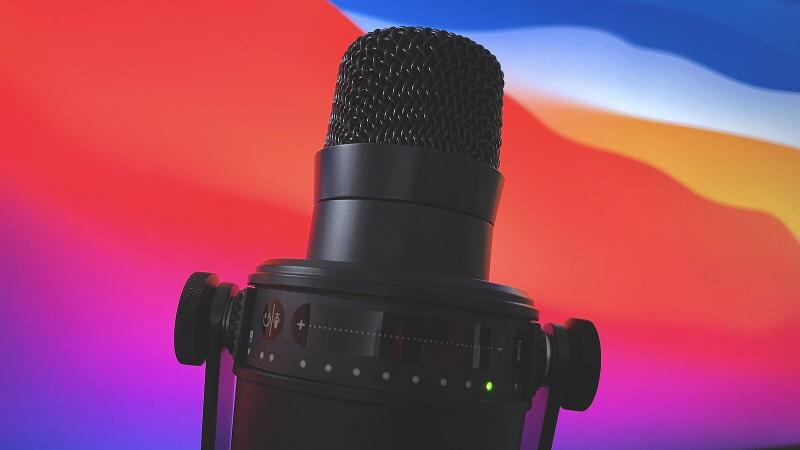 Without a suite of onboard controls to adjust the mic’s various settings, you’ll have to use the ShurePlus MOTIV app mentioned earlier. While companion apps can sometimes offer a frustrating experience, the Windows app is well-built and simple to use, ideal for those new to the world of audio recording.

The auto mode will likely be the first port of call for all but the most advanced users, and it does what it says on the tin; automatically adjusts your mic’s settings on the fly for a consistent, high-quality recording experience free of clipping. 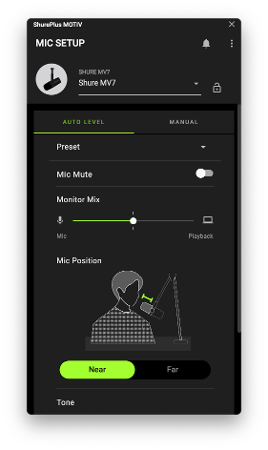 One particular feature that shines is the mic position toggle, automatically optimising the mic’s settings depending on if you’re near or far from the mic. This is particularly handy for streamers and podcasters that don’t want the microphone in shot; by selecting the far preset, it’ll automatically adjust settings so every word is picked up clearly without the obvious hiss from simply upping the gain.

You’ve also got the option of toggling the tone of the recording, with three presets – Dark, Natural and Bright – to choose from. What you’ll choose will likely depend on the type of content you want to create, and you can take things much further in manual mode if need be.

Manual mode is where you get into the nitty-gritty of audio production, allowing you to adjust the EQ, enable a limiter, reduce the dynamic range using compressor effects and more, and you can save the presets within the app for easy switching. There’s even a dedicated DPS within the mic that remembers the settings even when switching devices, perfect for multi-device use.

Once you’ve adjusted your settings, how does the Shure MV7 perform? In a word; well. We’ve looked at the mic through the eyes of an entry-level podcaster or streamer, so we tested the microphone with automatic settings enabled and USB connectivity, and the experience is impressive. 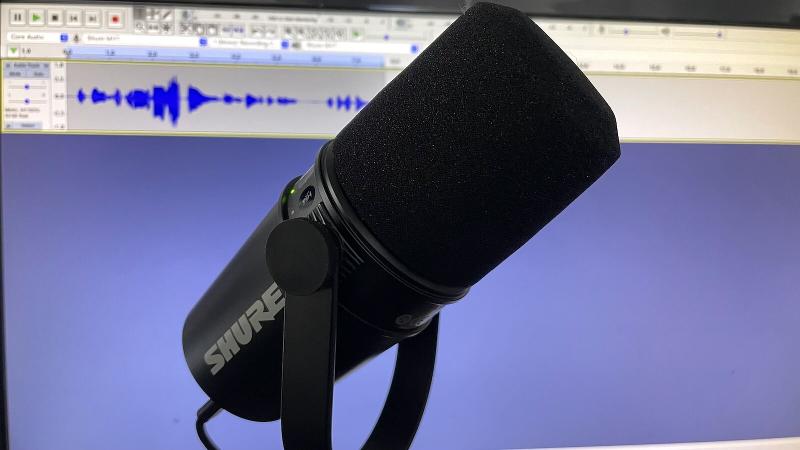 The auto mode, especially when you correctly select the right mic position, excels at voice recording, even managing to avoid clipping or distorting during exceptionally loud moments (like roaring with laughter during a podcast). It’s perfect for podcasts, streaming, voice-over work and more, though the single cardioid recording pattern means it’s not the most effective for recording music or atmospheric sound.

That quality is only improved by using XLR connectivity, but without a suitable audio interface, it wasn’t a feature we were able to test ourselves.

The Shure MV7 is an impressively capable dynamic microphone with great software and maximum platform compatibility, so it shouldn’t come as a surprise that it’s also pricy. If you buy directly from Shure, the MV7 starts at a not-insignificant £259/$249 and it goes up to £279/$269 for the Manfrotto tripod bundle if you haven’t already got a boom arm or stand to hand.

The good news is that the two Shure MV7 bundles are much cheaper via Amazon in the UK, coming in at £199 and £219 respectively. To see how it compares to the competition, take a look at our selection of the best USB microphones.

The Shure MV7 is a great high-end dynamic microphone with a cardioid recording pattern suited perfectly for podcasting and streaming, recording sound in front of, but not behind, it, and the results are generally crisp.

Though the touch controls aren’t quite as handy as physical knobs and buttons, the ShurePlus MOTIV app for desktops, laptops and even smartphones allows for access to most audio recording functions – and importantly, a surprisingly well-tuned auto mode for beginners. If you work across multiple platforms and devices, the MV7 offers a unique experience.

The dual recording on offer from USB and XLR connectivity is a huge plus, allowing you to record in low- and high-res formats simultaneously or simply upgrade from a USB to XLR connection further down the line.

It’s just a shame that it doesn’t ship with a stand by default; you’ll have to attach the yoke mount to an existing boom arm or tripod, or invest in an even more expensive model with a Manfrotto tripod in the box.