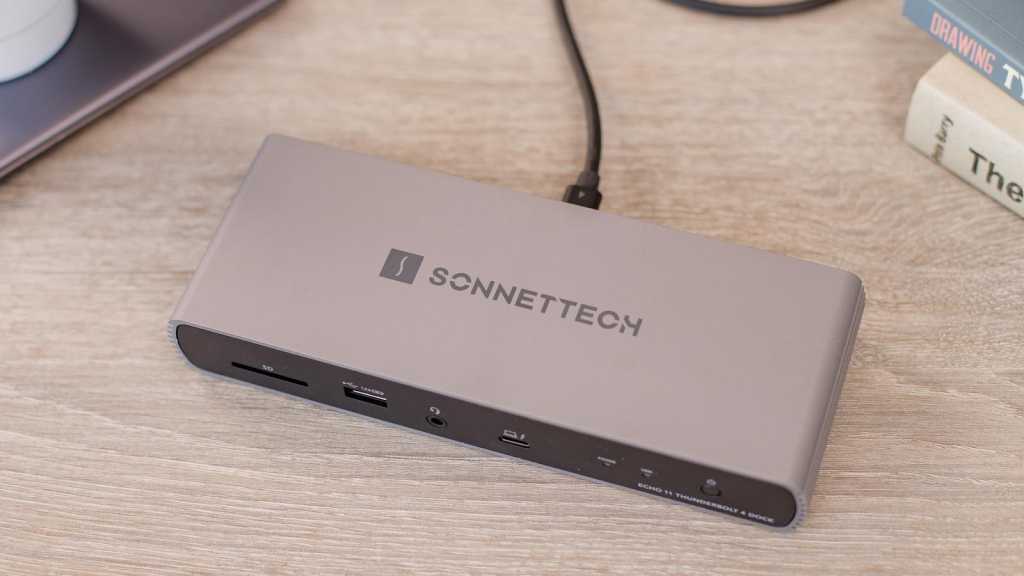 There are cheaper Thunderbolt 4 hubs available, also with four T4 ports, but they lack the Echo 11 Dock’s Gigabit Ethernet and SD Card slots plus headphone jack, and charge the connected laptop at 60W rather than this dock’s more powerful 90W.

Thunderbolt 4 is the latest computer connection technology, and it’s becoming popular for its speed and backwards compatibility with the more established Thunderbolt 3 and USB-C.

They are also more future proof, given that your next laptop or device is likely to use the more modern connector.

Offering certified 40Gbps bandwidth, multiple Thunderbolt 4 ports and daisy-chaining, plus other benefits, the new connection (also compatible with the equally new USB4) is the one to buy if you are upgrading your computer setup with a multi-port hub or docking station.

Both hub and dock connect the computer (usually it’s a laptop or tablet) via a single Thunderbolt 4 (TB4) cable. A dock boasts an increased number of different types of port than a more singularly minded hub and is particularly suited to adding external displays and a wired Internet connection.

The fully featured Echo 11 Dock includes four TB4 ports (one is reserved for connection to your laptop, tablet or desktop), which doubles the number found on Thunderbolt 3 hubs and docks.

Each is rated at 40Gbps and can charge at an equally impressive 15W.

Thunderbolt 3 (TB3) is the same speed as TB4 on all Macs and most Windows PCs (although TB3-owning PC users should check that their computer is compatible) but TB4 offers smarter device daisy-chaining and improved PCIe at 32Gbps for storage speeds up to 3,000MBps, which is double the minimum requirements of TB3.

To attach one or more external displays (up to two 5K screens or a single 8K display) to your laptop, you’ll be using the TB4 ports – either directly to a USB-C monitor or using USB-C-to-DisplayPort or HDMI adapters (not included).

We would prefer either an HDMI or DisplayPort on the dock rather than have to buy an extra adapter, but with USB-C displays becoming more popular, it’s easy to see why having one or the other of the traditional screen connections might be redundant for an increasing number of users.

Aside from the four Thunderbolt 4 ports, there are three fast 10Gbps USB-A ports (USB 3.2 Gen 2) for connecting older devices – and each can charge at 7.5W. There’s also a USB-A port on the front of the dock, but it’s weedy USB 2.0 that offers just 480MBps transfer but can charge at 7.5W so is more for power than data.

Typical USB-A devices to connect include memory sticks, webcams, printers and slower hard drives. Use the TB4 when you can as the bandwidth is so much faster.

The Echo 11 can power a connected laptop at up to 90W PD, which is more than the TB4 hubs that max at 60W – 60W is fine for 13in and smaller laptops but not powerful enough to fast-charge larger laptops. The lower-powered hubs should keep a 16in laptop charged while in use; they just won’t charge as fast as a 90W or higher input.

The overall power supply to the dock is 135W, leaving 45W to power the connected devices, although some power will be required by the dock itself, of course.

To escape the vagaries of Wi-Fi the Gigabit Ethernet port offers solid and dependable wired Internet access. You won’t find this port on one of the T4 hubs, although you can certainly buy a USB-C adapter that will do the job.

The fast UHS-II SD Card reader looks like a handy feature for photographers and their camera cards, but, actually, the format is a smart and very portable way to add affordable storage to your laptop, with 500GB SD cards available from around $60 or £60, and reaching up to 1TB in capacity.

Sadly, there’s no microSD card reader, but many of these smaller and more modern format cards do come with an adapter to fit the larger SD slot.

Despite its name, the Echo doesn’t feature a built-in voice assistant!

While there is a much wider choice of Thunderbolt 3 docks, if you want to keep up with the latest technology and move your expensive docking station with you when you upgrade, then buying a Thunderbolt 4 dock now makes a lot of sense.

This dock is in the classic slim horizontal format that can be slipped in most places on a desk. I’m a fan of the compact vertical cases (as seen in the classic Caldigit TS3 Plus Thunderbolt 3 Dock) though, as they take up less desk space, although changing connections can be fiddly at the more-crowded back.

I would have preferred Sonnettech to place the fourth laptop-connecting TB4 port at the back or side, as the mandatory cable sticking out of the front looks messy and can get in the way.

The SD Card reader on the front is well-placed as this may well be accessed more often than the more permanent connections at the back.

There are two lights on the front: one to show that the dock is receiving power, and the other to indicate it is linked to the computer. 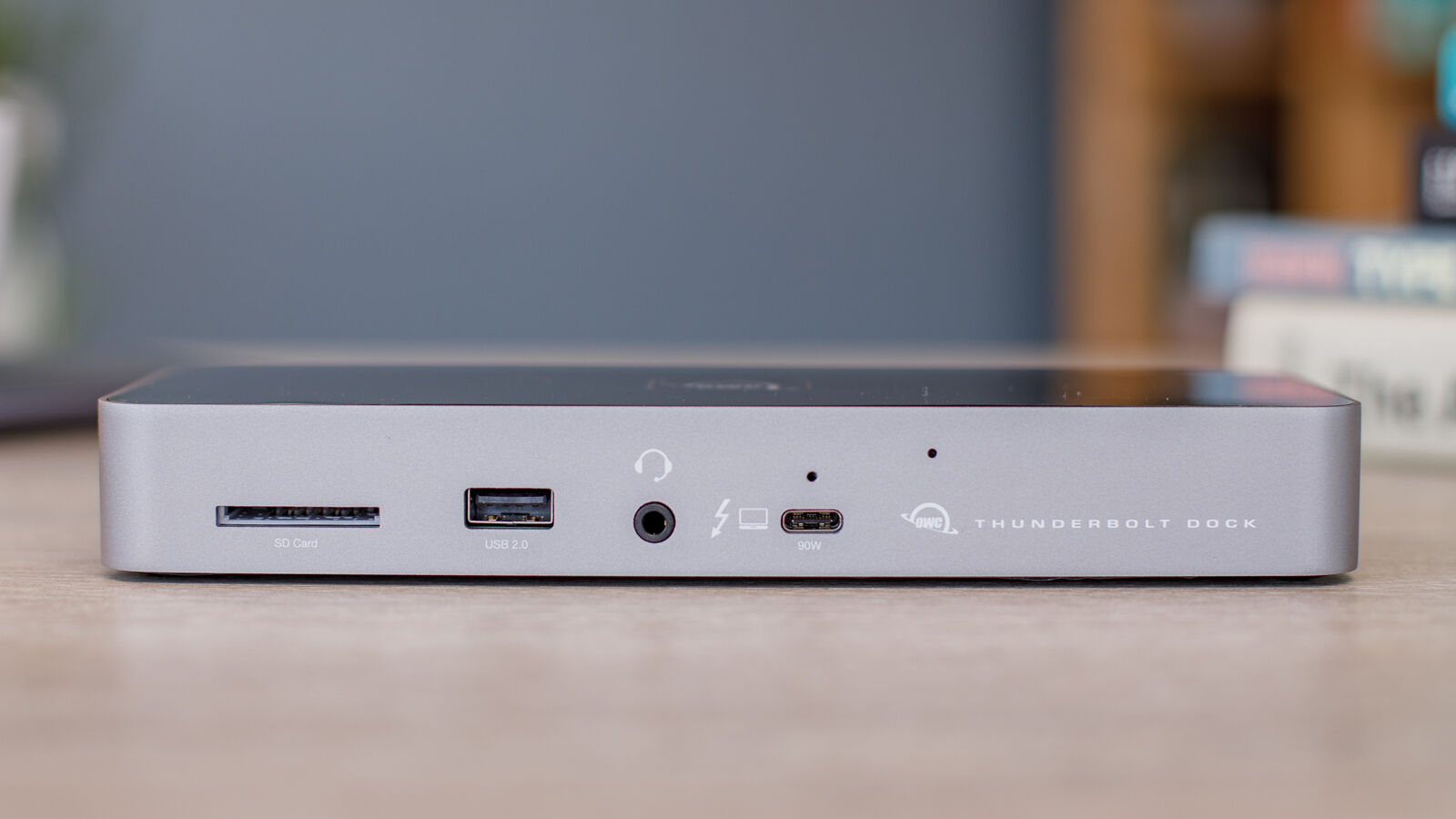 The Thunderbolt 4 hubs are much cheaper, ranging from $179/£139 to $229/£199, although they lack the Ethernet and SD Card slots. If you can cope without either, a simpler hub might be a better choice – the Caldigit Element Thunderbolt 4 Hub has as many T4 and USB-A ports as the Echo 11 Dock, and you can add Ethernet and SD adapters if you need them.

As the first Thunderbolt 4 dock on the market, it could charge a premium, and its UK cost, in particular, seems high. The Anker Apex Thunderbolt 4 Docking Station is cheaper, although it swaps two downstream TB4 ports for two HDMI ports – handy if you want to connect your laptop to a couple of HDMI monitors.

The Sonnettech Echo 11 Thunderbolt 4 Dock boasts a full range of ports, including of course the all-important four T4 connections.

There are cheaper Thunderbolt 4 hubs available, also with four TB4 ports, but they lack the Echo 11 Dock’s Gigabit Ethernet and SD Card slots, plus headphone jack, and charge the connected laptop at 60W rather than this dock’s more powerful 90W.