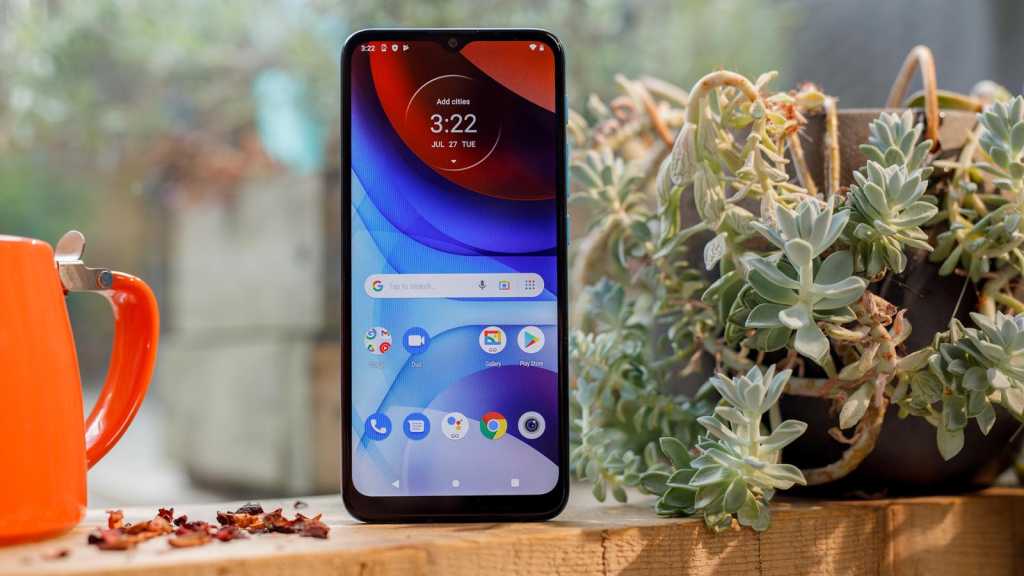 If you’re looking for one of the cheapest, most fully-featured smartphones around right now – you’ve found it. What the Moto e7i Power lacks in performance, it makes up for in affordability, battery life, and a refreshingly clean Android installation.

As phones become more all-singing and all-dancing personal supercomputers that we keep in our pockets, those advancements from high-end devices start to trickle down to cheaper devices, too.

Step forward the Motorola e7i Power – a phone that costs under £80 new, and still offers a nice big display, solid battery life making it a potentially great option for a first smartphone.

While it’s clear some compromises had to be made to allow for that impressively low price, it’s still got enough under the hood to make it worth a look for anyone that doesn’t want to break the bank on a new device.

The Moto e7i’s basic design may not do a great deal to wow, but it’s got some nifty features you may miss at first glance. Available in Tahiti Blue or Coral Red, the rear has a matte finish, which makes gripping it easier, but it’s also just shiny enough to offer a little pizzaz, too.

The camera bump is also pretty easy to account for when the phone is flat on a table, too, and there’s a small speaker grille on the back for sharing audio out loud.

The front, on the other hand, is dominated by the 6.5in display. What you may not be expecting is that the screen is actually taller than many high-end offerings while shaving off a slither in width. This makes it easier to hold with one hand, but if you need to access the top of the screen it could be a little bit of a reach.

The selfie camera notch is also pleasingly subtle, offering a single ‘teardrop’ in the bezel above the screen that’s centered, too.

Despite its low price point, the Moto e7i Power has still got plenty of future-proofing features. USB-C charging, a dedicated Google Assistant button, and a fingerprint scanner on the rear all belie its affordable nature.

There’s also a 3.5mm headphone jack – something not as common as it once was as well as wireless audio thanks to Bluetooth 4.2. It’s also IP52 water repellent.

While that 6.5in screen dominates the design, it’s also the first point where cost-cutting starts to appear.

Firstly, the display’s resolution is just 720p and it lacks HDR support. This means that while movies and TV shows are certainly watchable on the Moto e7i Power, they’re not going to be as sharp or as colour accurate as watching them on a high-end phone – or even a mid-range one.

While more and more devices are moving to OLED, though, Motorola keeps the price down here using LCD technology. While that does mean there’s less of a difference between light and dark colours, it does help the battery chug along for a lot longer in the day.

If you can afford it, look for a phone with a Full HD resolution.

With just 2GB of RAM and the Unisoc SC9863A chip powering things, it’d be wise not to expect high-quality gaming or multi-tasking on the Moto e7i Power. While it’ll cope with web browsing, social media, and firing off a few text messages while listening to music, it’s not likely to power through anything much more demanding.

For that reason, it comes packing Android Go, a lightweight version of Android that swaps out the larger, full-fat versions of basic Google apps for their comparably easier-to-run alternatives.

That’s not to say you can’t have some fun, though. Call of Duty Mobile, a pretty graphically intensive application, ran surprisingly well – albeit only at the 720p resolution cap offered by the aforementioned display and with the occasional judder, too.

That 2GB RAM limit will mean you’ll have the best experience with other apps closed, too, so expect to do a lot of application cleaning after a few hours of use.

I used Geekbench 5 and the results were predictably unexciting, with a single-core score of just 133, and a multi-core score of 479. For reference, the Poco X3 NFC hits 1764 for multi-core, and that phone retails for a still very reasonable £199.

You can also see how the Moto e7i compares to similarly priced phones like the Nokia G20 and Motorola’s G-series like the G10 and G30.

That’s indicative of how underpowered the Moto e7i Power is so keep your expectations in check. As you’d probably expect, 5G is nowhere to be seen. If you’re in a coverage area and are looking to take advantage of that increased bandwidth, you’ll need to plump for a more expensive device.

It’s also worth noting that while the 32GB is pretty meagre, you can plug a microSD card in to expand that.

Unfortunately, the Moto e7i Power is tough to recommend to budding mobile shutterbugs. While in decent light it performs well enough, it lacks detail when snapping from the 13Mp wide sensor as well as the 2Mp macro lens.

Images appear a little dark, and HDR implementation feels flat, with neither light nor dark areas of an image really standing up to any real scrutiny.

The selfie camera, a 5Mp sensor, also struggles with detail. Check out my examples below to see what I mean.

When it comes to video, this is a no-thrills affair – with basic 1080p resolution and 30fps video that suffers from the same lack of detail and flat lighting as still images.

While it may lack in performance or camera quality, the ace up the Moto e7i Power’s sleeve is its battery life (as you may expect from the name).

Its initial charge may be slow (I registered an average of 21% from thirty minutes of charging time), but its 5,000mAh battery offers multiple days of use without charging if you’re happy to forgo its brightest display settings.

Using PCMark’s Work 3.0 battery test, the device ran with the screen on for an impressive 15 hours and 11 minutes. In normal use cases, though, expect a full day and a half (at least) without needing to reach for the charger.

And you’ll need that charger, too – there’s no wireless charging here to understandably help hit that price very low point.

As I mentioned earlier, the e7i Power runs Android Go (Android 10 here rather than the more recent 11 version), which is specifically built to run more quickly on phones that don’t need the full Android experience’s wealth of extra features and have low-powered components.

Apps launch faster, and it ekes every bit of available RAM and storage from the e7i Power’s hardware.

That’s not to say it’s lacking in impressive features, though. It’ll still convert text to speech through Google Go, runs Chrome, and offers access to the Play Store for apps and media.

The likes of Spotify, Skype, and Twitter also offer ‘Lite’ versions of their apps for Android Go, and installation bloat is almost non-existent – while some companies like to stuff fresh devices with plenty of apps, there’s little to be found here.

It’s available in the UK and Australia, but at the time of writing only the 2020 Moto e is available from the manufacturer in the US.

You can buy it direct from Motorola as well as retailers like Amazon, Laptops Direct and Very.

It’s hard to find anything beyond the price point that’s particularly noteworthy about the Moto e7i Power, but perhaps that’s the point.

Motorola’s effort might be one of the cheapest smartphones on the market now, and we much prefer it to the painfully hamstrung Nokia 1.3 or even the ever-so-slightly more expensive Nokia 2.4, both of which offer worse cameras and much slower performance.

Still, with the likes of the Poco X3 NFC available for around £100 more and offering a much better camera, brighter screen, and drastically increased performance, it’ll all come down to your budget.

If you can’t afford anything more expensive, the e7i Power has a big screen and good battery life. You’ll need to be ok with its basic resolution, cameras and other specs but it’s still one of the best phones under £100.