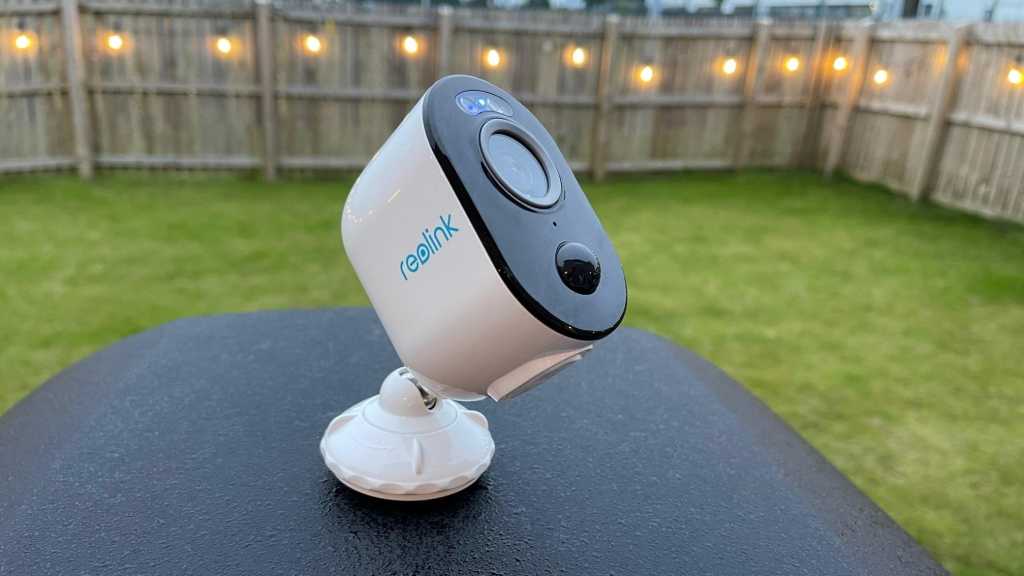 The Argus 3 Pro offers a lower-cost alternative to Arlo (and other brands) and is a decent choice if you need a completely wireless outdoor camera – but only if you can live with its limitations.

Smart home security has become a highly competitive part of the tech sector in recent years. From household names such as Google and Logitech to niche brands like Eufy and Reolink, there is plenty of choice out there if you want to keep an eye on your home.

Reolink follows in Eufy’s footsteps by providing a variety of different types of camera to suit different needs, whilst unifying them under the roof of a single app.

What sets the Argus 3 apart from its rivals is the inclusion of person and vehicle detection, a 230 lumen spotlight which can light up when motion is detected and the ability to connect to 5GHz Wi-Fi as well as 2.4GHz. It’s also IP65 rated, so can be left outdoors in all weather.

Perhaps most important is the fact you can avoid paying subscription fees. That’s because the Argus 3 has a microSD slot. Pop a card in there (up to 128GB) and you can record and review motion events that the camera detects. It cannot record continously though, like most battery-powered cameras.

You can even jump back to previous days, if storage on your card permits. That’s something you can’t do with a Ring or Nest camera.

Based on my tests, using a 64GB card, you it’s possible to store a full year of events before they start getting overwritten: 8GB has been used up after a month and a half.

There’s cloud recording available if you prefer that approach – it means evidence can’t be lost if a camera is stolen or the card damaged – but at time of writing, this option is not yet available in the UK. If you’re in the US, subscriptions start from free, which gives you 1GB of space and a maximum of seven days’ history. Pay $4.99 per month and you get 30 days’ history and 30GB of storage to cover up to five cameras. There are more options, too.

The Argus 3 Pro is solidly built and comes with a variety of mounting options depending on your needs. The built-in 6000mAh rechargeable battery makes placement a breeze without having to worry about drilling holes through your home. If you like, you can even add a solar panel (£24.99/US$24.99)that provides power via the USB charging port. The battery should last between one and four weeks, which isn’t as long as rivals, but the solar panel should keep it going indefinitely.

In my case, with cars and deliveries passing by, I got a few weeks of use with the battery dropping to 50%, but your mileage will vary depending upon how often motion alerts are triggered and how often you’re streaming video from the camera on your phone

In the box, you’ll find a wall mount that you can screw onto a wall (or ceiling), a stand to place the camera indoors on a shelf, plus a strap that allows you to fix the wall mount to a pole or tree.

The wall mount has a lockable mechanism that holds the ball joint in place once you’ve chosen your desired camera angle.

For the wall mount, you also get a plastic template to help you prepare pilot holes before you commit. It’s handy, but I much preferred the paper template that came with the solar panel. That gave you explicit points where to drill, but you have to prepare the plastic template a little bit first.

Setup of the camera is done using the Reolink app. A QR code is scanned, and the device then uses your existing Wi-Fi connection on your phone to establish a link. Overall, it’s quick and painless.

If you opt for the solar panel, make sure that you position it correctly (south facing ideally) for maximum exposure to the sun. If you manage this, then you’ll find that the camera’s battery maintains a high charge level in normal use. In my experience, it never dipped below 90% after the initial charge using the solar panel.

The Argus 3 Pro offers person and vehicle detection, which triggers an event that’s stored in the microSD card if you’ve inserted one. Motion detection is good overall. I did get a few false positives where clips failed to show an individual on camera when I loaded the app for a look. Notifications appeared fairly quickly on my phone, which is important for any security camera.

Of course, if you miss a notification, every detected event is logged and recorded, so you can easily go back and check what happened later. The problem here is that the default clip length is only eight seconds, and the maximum you can select is 30 seconds, so some events won’t be captured in their entirety, which is a pain.

The detection is specifically limited to a person, with no ability to recognise familiar faces or when packages have been left. There’s no way to set up detection zones if you want to include or exclude a specific area within the frame.

Still images are not taken in addition to the video capture. If you want to capture an image, that has to be done manually from the app.

At night, the camera reliably picks up on movement from individuals in its field of view. The infrared LEDs shut off when the spotlight is enabled, allowing for ‘colour night vision’. Infrared LEDs are used when there isn’t enough available light and the spotlight is off, because motion is detected.

If the camera is mounted low or close enough so the spotlight can illuminate passers by, it works fine. However, if you’ve fitted it on the first floor of your house to minimise theft, you’ll find that image quality relies more on local street lighting instead since the spotlight isn’t powerful enough to light the scene from that sort of distance.

The Siren isn’t as loud as you might expect an alarm to be. It’d deter an individual but it won’t alert your neighbours that something’s happening. You can switch the siren sound to a recorded voice message. Again, it’s audible, but probably not something that’ll cause significant alarm in the street.

The app is simple enough to use, though you can also use a web portal in a browser if you prefer. In the app, function buttons are clearly labeled: there are large ones to enable 2-way talking and accessing previous recordings.

It would be nice if the playback scroll head was permanently visible, though. When you first open the app, the area is blank which adds an unnecessary step in opening the playback section.

Integration with your smart home comes in the form of Alexa and Google Assistant. With both, you can view the stream from the camera by asking your smart device to show you the camera.

Sadly, that’s all you can do with them. There are no configurable elements in the Google Home app that allow for detection-based notifications or anything like that.

HomeKit support is also absent, which may be a deal-breaker if you mainly use Apple’s Home app and an iPhone. Neither is there IFTTT support.

The camera has a built-in siren which you can use to scare off potential burglars.

There are two versions of the Argus 3 that you can choose between. The Argus 3 Pro has a 2K camera and is available from Reolink directly or Amazon. In the UK, there seemed to be a permanent deal on Reolink’s website discounting it to £95. Despite the countdown timer, every week we checked, the same deal was available.

You can also buy bundles from Amazon that include the camera and solar panel. If you need an outdoor battery-powered security camera, the bundle is the way to go, and more so if you’re thinking of locating the camera where it is not easily accessible.

Overall, the Reolink Argus 3 Pro is good battery-powered security camera that provides good quality video both during the day and at night. If you’re after a camera with a spotlight and don’t need HomeKit integration, then this a cheaper option than quite a few alternatives (including from Google).

The app could do with a lot more polish though, and it is lacking in motion detection where other competitors are already pushing the boat out with functionality in this price range.