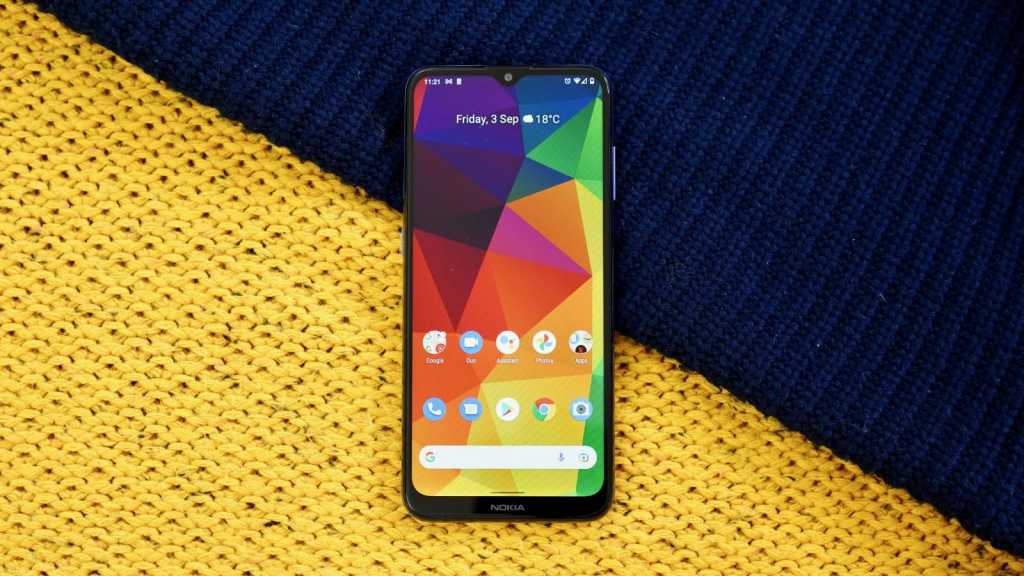 The Nokia G20 is another solid but deeply unspectacular effort from the resurrected Finnish brand. Decent build quality, battery life, and software provisions inspire a level of trust that’s far from common below the £150 mark, but the phone’s poor performance and limited display serve to erode that confidence.

To that end, the Nokia G20 is well built, long-lasting, eco-conscious, and refreshingly free of needless software embellishment. Meanwhile, 2-years of guaranteed software updates to the latest Android software provides an unusual degree of future-proofing at this price.

At £134.99/€169/US$199, it’s also extremely affordable, placing it into direct competition with the Moto G10.
But is there any room among all this worthiness for a little fun? Should Nokia cut loose a little with its smartphone efforts?

It’s surprisingly pleasant to wield, too. That largely comes down to the textured finish that HMD has opted for on the plastic rear cover, which makes a blessed change from all the smooth, shiny, fake-glass rear panels that you tend to get at this end of the market.

Besides looking quite appealing, it also aids the phone’s grippiness and minimises the curse of greasy fingerprints.

In keeping with Nokia’s past, the Nokia G20 feels reasonably solid in the hand. Yes, there’s a little give and flex when you press the middle of that textured back, but it doesn’t feel too cheap at all.

The model I was sent comes in the Night colour, which takes on a pleasingly deep midnight blue hue. I imagine that the white Glacier model doesn’t look quite so stealthy or classy, but it’s an option if you prefer.

That classy hand feel is spoiled somewhat the moment you get your first notification or unlock the phone for the first time. The haptics are big, vague, and somewhat rattly.

The phone’s fingerprint sensor is stashed underneath an enlarged power button on the right-hand edge. It’s an approach that both Sony and Samsung have taken with some of their £1,000+ phones of late, and it works just as well at this end of the market.

Aside from a volume rocker that feels as if it’s been positioned a smidgen too high on that same right-hand edge, the Nokia G20 also includes a dedicated Google Assistant button on the opposite side of the phone. It’s as superfluous here as it has been on every other previous phone to feature such a thing.

The top edge of the Nokia G20 features a 3.5mm headphone jack, which isn’t at all unusual at this end of the market, but which is welcome nonetheless. If you’ve got a smartphone budget of just £135, you’re unlikely to have enough left over for a competent set of wireless earphones. Even including wired is rarely the done thing anymore.

That said, Nokia did supply me with a set of its Nokia Lite Earbuds to try, which offer true wireless audio for a very reasonable £40. You can get better audio quality by spending the same on something to hook into that 3.5mm jack, but it’s always nice to have the option.

When it comes to the front of the phone, you get the kind of enlarged chin bezel and old school teardrop notch that’s fairly typical for an entry-level phone. It’s not exactly attractive, but it’s not an eyesore either.

You have to set your expectations fairly low for a sub-£150 smartphone, even in 2021. But I was still a little disappointed by the Nokia G20’s display.

It’s not the 6.52in size, which is plenty big enough, nor the fact that it’s an LCD panel. It would be unreasonable to expect OLED for this money.

It’s not even the fact that this display has a mere 60Hz refresh rate. True, there are plenty of sub-£200 phones with 90Hz and even 120Hz displays, but that still requires a 20 to 40% hike in expenditure.

This screen doesn’t get massively bright at around 400 nits with auto-brightness turned off, but it’s bright enough in all but sunny outdoor conditions. Similarly, colour accuracy is reasonable for the money, with an sRGB gamut coverage of 83.9%. Again, spend more to get better.

The main source of disappointment here, though, is the fact that the Nokia G20 display doesn’t even hit a Full HD resolution. Instead, you’re left with a mere 720×1600, or HD+.

True, the Moto G10 also features such an underwhelming resolution, so this isn’t an outlier for the money. I’d simply suggest that spending a little more (perhaps £35 to £50 – or similar in US$) to gain a guaranteed Full HD+ would be a worthwhile investment.

The Nokia G20 runs on a MediaTek Helio G35, backed by 4GB of LPDDR4 RAM and 64GB of storage. That’s an underwhelming provision all round and there’s not a higher-spec model.

Even before I get into the matter of benchmark results, you can tell that this is a slow phone. There’s a wallowy, sluggish feeling to even basic navigation tasks like unlocking the phone, booting up and switching apps, or moving in between home screens.

But no, the benchmark results aren’t too hot either, since you mentioned it. In fact, a Geekbench 5 multi-core score of 881 is downright shocking.

As you can see from the following charts, the Nokia G20 doesn’t fare any better in the GPU stakes, where it gets soundly beaten by its Snapdragon-packing rivals.

Dare I even mention gaming performance? It’s unlikely anyone will be indulging in a marathon game of CoD Mobile with this phone, but know that if you do your experience will be very far below par. Genshin Impact loads achingly slowly and with low graphical settings, still performs abysmally. Unplayably, even.

Again, if you can spend £40 to £50 (or US$) more on something like the Poco X3 NFC, you’ll enjoy a significant bump in performance, and a fair few additional features elsewhere to boot.

If you stretch up to around the £200/$200 mark, it’s also possible to get 5G connectivity, though that brings about its own compromises. There’s no 5G to be found here, at any rate.

Nokia hasn’t completely scaled back its camera provision with the Nokia G20, which is good to see. A 48Mp wide sensor with an f/1.8 aperture is decent on paper, and you also get a 5Mp ultra-wide, too.

These are backed by 2Mp macro and depths sensors, but let’s quickly dismiss those as the irrelevancies they are.

That 5Mp ultra-wide really isn’t very good at all. On an overcast yet still plenty-bright day, I noticed ghosting on a simple shot of some swans, as if they’d entered Matrix-style bullet-time.

Generally, though, the ultra-wide is a good deal more drab and less detailed than the wide sensor, especially at the edges of the frame. The main camera is at least capable of taking some reasonably balanced shots in good lighting.

Night mode shots maintain the tone of the scene, but are generally murky and grainy and fail to significantly brighten things up.

Selfies are handled by a poor quality 8Mp selfie camera that struggles with any shortage or excess of light. Weirdly, when you switch to the front camera’s portrait mode, the viewfinder blurs out your face like you’re not going to be in focus. The resulting shots come out fine (relatively speaking), but the lack of a proper preview is disconcerting.

Video capture from the main camera comes in at an incredibly basic 1080p at 30fps. Even the Moto G10 can manage 60fps.

The Nokia G20 packs a 5050mAh battery, which is larger than average for a smartphone, but less rare among cheap phones. Both the Moto G10 and the Moto G30 sport 5000mAh cells, for example.

Still, it’s a welcome inclusion and combined with that power-sipping 720p display, you shouldn’t be worrying come the end of the day.

In my experience, after a long 16 hour day of light to moderate usage, with more than 3 hours of screen-on time, I was left with upwards of 60% left in the tank. That’s a strong result.

More intensive usage does drain that battery quite quickly, however. The PCMark battery test, which runs an extended loop of simulated everyday activities, resulted in a middling score of 11 hours and 17 minutes.

Of course, with a phone of this type, intensive use probably isn’t on the agenda. In all likelihood, then, you’ll be able to get through a full two days on a single charge just fine.

Like its affordable rival the Moto G10, you only get a maximum of 10W charging support. But at least with the Moto you actually get that charger in the box. With the Nokia G20, you have to provide one yourself.

One major strength Nokia shares with its budget phone rival Motorola is that its phones run on a particularly clean version of Android.

With none of the visual clutter or excessive app provision of rival efforts from Honor, Realme, Oppo and Samsung, the Nokia G20 feels blissfully unencumbered from initial set-up onwards.

This is Android 11 the Android One way, which means relying almost wholly on Google’s own apps for all your basic needs, from viewing your photos to surfing the web to dealing with SMS messages and downloaded files.

Of course, you can still utilise the Google Play Store to provide your favoured alternatives. But Google makes some of the best and most intuitive examples of these core apps, so it’s great to be able to hit the ground running without the need for an extended app triage session.

There are a couple of preinstalled third-party apps, but they include Netflix and Amazon Shopping, which I suspect a fair number of people would install anyway. From the Nokia stable there’s just My Phone, an all-inclusive help app that deals with all things Nokia under one unassuming roof.

Going back to that issue of trust, Nokia has promised 3-years of monthly security updates and 2-years of software updates with the G20. Such an assurance is quite a rarity among affordable phones, which are too often left to wither beyond their initial year or so of relevance.

The Nokia G20 is available to buy now in the UK, either directly from the Nokia website or from third-party retailers such as Amazon, Very and Argos.

The sole model that’s being offered here costs £134.99/€169, which is towards the lower end of the affordable phone spectrum. Keeping it company are the likes of the Motorola Moto G10 and the Vivo Y20s, both of which represent better choices than the Nokia G20.

Both of those rival phones supply superior performance and even better battery life, not to mention the fact that they actually give you a charger in the box. The Vivo Y20s does lay on a much more muddled UI, but the Moto G10’s clean take on Android is just as good as Nokia’s.

Check our chart of the best budget phones to see more options.

The Nokia G20 presents as a good honest phone with nothing to hide. It’s very cheap, reasonably well made and its battery can potentially last two days if you don’t go too hard on the media.

This is useful because you really won’t want to go hard on the media with this phone. The G20’s LCD display, with its fuzzy 720p resolution and lowly 60Hz refresh rate, doesn’t exactly make video or gaming content sing.

A MediaTek Helio G35 processor, meanwhile, ensures that any gaming you do choose to dabble in will need to be of the light and casual variety. This is also fine, but even general navigation can feel sluggish and choppy here.

Nokia’s clean approach to Android software is commendable, particularly with its renewed commitment to extensive updates. But thinking about how the Nokia G20 is likely to be running in two or even three years makes me wince.

Ultimately, this is a very cheap phone, so I can’t be too hard on it. But you can get better performance for similar money, and spending a little more will secure significant gains in all departments.