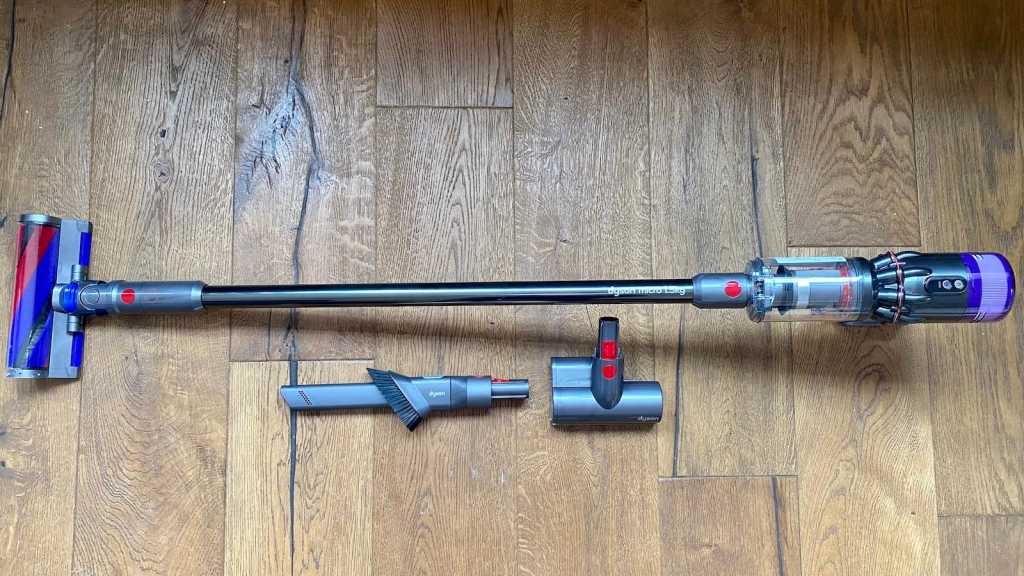 If you’re looking for a grab-and-go cleaner for spills and light dusting, the Micro should certainly be a contender. But you’ll need another vacuum for day-to-day use.

Dyson’s last few vacuum cleaner releases have included some specialised products, such as the mighty Outsize (buy it if you have strong arms and acres of carpets) and the manoeuvrable Omni-glide (for city dwellers with petite pads and hardwood floors).

Then there’s the Micro. It’s essentially a miniaturised version of the V series vacuum cleaners, but unlike those appliances, it’s not an all-rounder. Instead it’s a specialist machine like the Outsize and the Omni-glide – and that means it’s not for everyone.

But it’s hard to argue with the Micro’s price. In the UK, it costs £299.99, making it one of Dyson’s cheapest vacuum cleaners. That’s the same price as the V7 Absolute, which was launched way back in 2017.

Relatively speaking, it’s a little pricier in the US at $399.99, so people may feel less inclined to take a punt on it.

It’s also Dyson’s smallest and lightest vacuum cleaner – and it feels it. It weighs only 1.5kg (3.3lbs), which is just over half the weight of the Dyson V11 (2.97kg/ 6.5lbs). You really can’t overstate how light it is; it’s incredibly comfortable and easy to use. Vacuuming a small kitchen takes no more effort than walking around it. And, if you’re using the Micro in handheld mode, it’ll be a long time before your arm gets tired.

So it’s easy to see why you might be tempted to buy a Micro and hope you could use it for day-to-day cleaning. But if you have large rooms, carpets or pets, look elsewhere.

In the box, you’ll get the vacuum cleaner body (which has an inbuilt lithium-ion battery), a wand, the main fluffy cleaning head for hard floors, a mini motorised tool, a combined crevice & brush tool, a wall dock and charging plug. 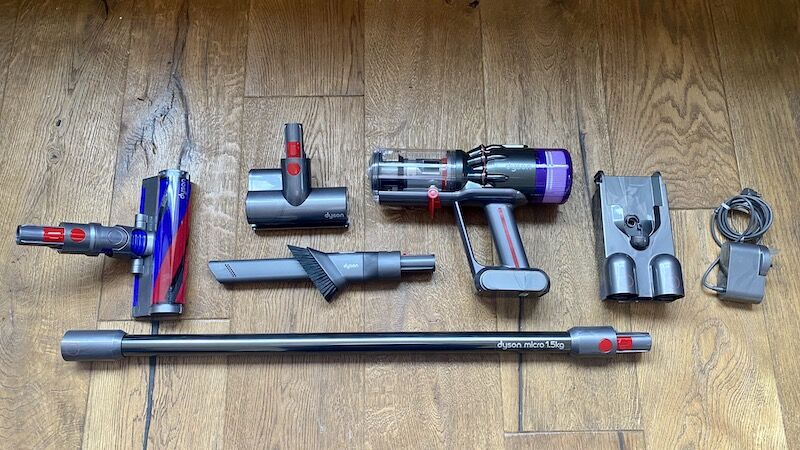 You can’t remove the battery for charging but you can opt to plug the vac straight into a socket, rather than using the dock. This also means that, unlike the V11 and the V15 Detect, you can’t buy a separate battery to charge and swap out.

In many respects, the Micro is a mini version of the V series. It’s the same shape, with a familiar Dyson trigger grip. Unlike the V series, however, you don’t need to keep a button on the trigger depressed to vacuum. Instead, the one-touch buttons are set above the bin: one to switch the Micro on and off and one for the high power setting.

As well as being smaller, the Micro is simpler. There’s no screen to display battery life and troubleshooting info, no automatic carpet detection and no piezo sensor, which the V15 Detect has. Obviously, Dyson has opted for a back to basics approach to keep the cost and weight down.

The low weight and lack of trigger grip make this a really easy vacuum cleaner to use. It’s at its best as a grab-and-go cleaner. It’s ideal for de-crumbing narrow gaps beside the bins and fridge, as the main cleaning head is about half the size of the one on a regular Dyson V series. On the other hand, this makes it a chore to vacuum big, open rooms.

It’s even better as a handheld. The crevice tool/ brush attachment works brilliantly on shelves and the sofa. To save yourself time and stop crumbs from scattering as you go, however, you might need to bump it up to full power. 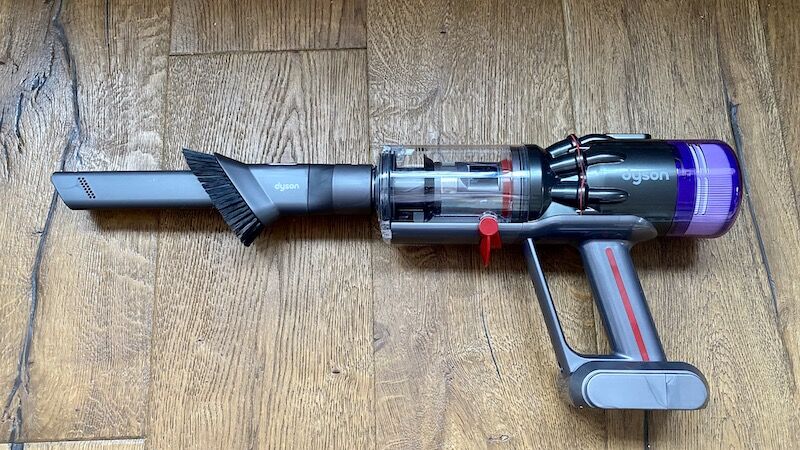 That leads us to the Micro’s short battery life, which is another limitation. It has a maximum stated runtime of 20 minutes. But on the high-powered MAX mode you’ll only get five minutes, tops. You’ll then need to charge it for 3.5 hours.

If you attach the mini motorised tool, the Micro will do a decent job on upholstery, a short flight of carpeted stairs or a rug. It’ll easily remove surface fluff but it will struggle with dirt ingrained in deep pile carpet. It just doesn’t have the power for that kind of job.

The Micro’s other flaw is in dealing with pet hair. Its narrow wand and tiny bin (it’s only 0.2 litres) can quickly clog up with fur. I have two long-haired pets and while Dyson might advertise that there’s no loss of suction during use, I can state that the Micro becomes considerably less effective once the interior is all tangled up with a web of hair.

You’ll also need to keep an eye on the bin as it fills up very quickly. If the battery life is short, the amount of time before you’ll need to empty the dustbin is even less. It’s far too easy to keep vacuuming and not notice that the bin is overfilled and rubbish is getting jammed in the appliance. This does feel like a bit of a design flaw. 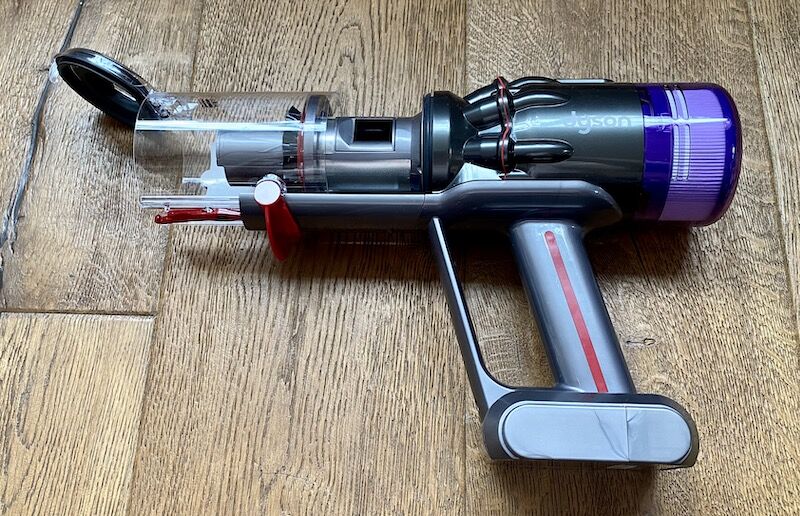 You’ll also find that, unlike newer Dyson models, you’ll have to manually remove wedged-in dirt and debris. Yes, the bin has an easy-empty slide, but as the space is so small, hair, fur and debris will get trapped inside nonetheless.

In the US, the Micro will set you back  $399.99. This means it’s the same price point as  the Omni-glide and  the V8 Animal. The Micro has similar limitations to the Omni-glide (it has a small bin, a short battery life and is for hard flooring only) but the Micro is significantly better in handheld mode.

If you can afford to spend £299.99/ $399.99 on the Micro to use as a secondary vacuum cleaner, you’ll find that it’s more than up to the job. It’s extremely light and comfortable to use, especially as a handheld cleaner. But it has a very limited range, from removing crumbs to dusting to handling small, dry spills. Plus, its battery life and bin size mean it can only be used for short periods.

It’s not good with pet hair and it’s not optimised for carpets. So, unless you’re a minimalist with a very compact space, don’t buy one in the hope that you can use it in place of your regular vac.

Not set on the Micro? For more advice and recommendations, have a look at our round-up of the best vacuum cleaners we’ve tested.