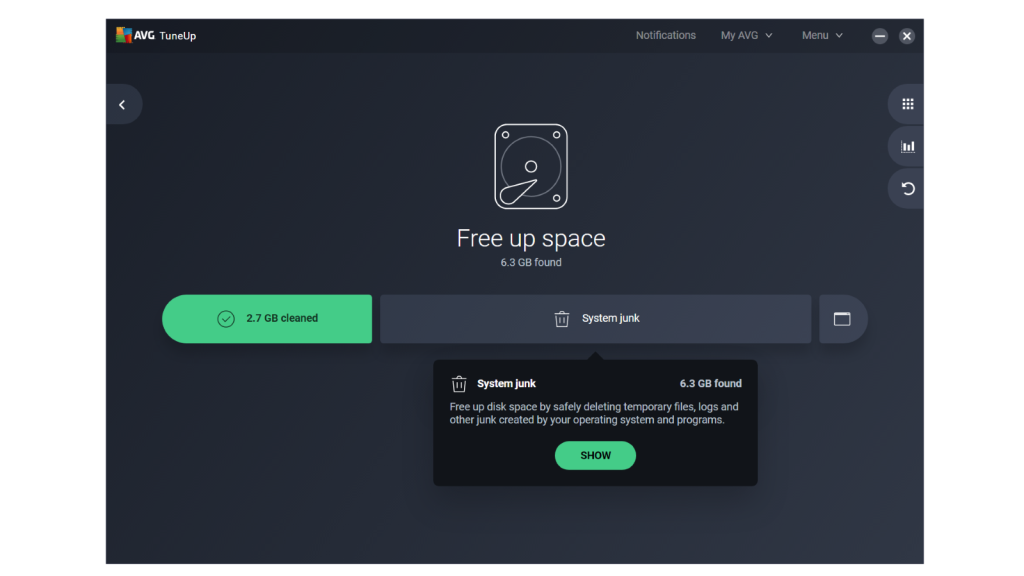 TuneUp is a user friendly PC cleaner with a concise interface and competent performance. There are a good amount of tools, but it’s one of the most expensive on the market only offering better value for money in the 10 device option.

AVG is well known for its anti-virus software, but that’s not all the company does. TuneUp, as the name suggests, is for giving your PC a bit of a spruce up, clearing out junk and making it faster. And that’s what TuneUp promises: a faster and cleaner machine. Let’s find out if it lives up to that promise.

There’s no free version of TuneUp, so I’m testing the paid-for Windows 10 version for this review. It also supports Windows going back to XP as well as Mac, Android and iOS. There’s a seven-day free trial so you can test it out before committing.

Installing TuneUp is easy and, although it takes up a little more space than some rivals at 113MB, it’s still done in just a few minutes.

If you’re familiar with AVG’s antivirus then you’ll feel right at home. Even if not, it’s easy to get to grips with TuneUp thanks to its clean, well-organised interface. To begin with, a large ‘Scan Now’ button prompts you to check your machine for all kinds of errors and junk files.

This took around 30 seconds, a little longer than some rivals but it was worth the extra wait because TuneUp discovered 2.7GB of space that could be freed up. That’s more than most other PC cleaners I’ve tested, though CCleaner Professional freed up a total of 3.09GB, despite reporting there was only 792MB of junk.

In TuneUp you get a neat breakdown of the results, showing that 2GB is ‘system junk’ and the remaining 700MB via browser cache.

TuneUp gives you great control over what to get rid of, so this isn’t an all-or-nothing situation. You can open up each section and untick categories if you want to keep the ‘junk’.

TuneUp also found 560 broken shortcuts and 300 broken registry items, the latter about on par with rivals although IObit Advanced System Care 14 found 1713 that could be cleaned up.

You could use TuneUp just for that easy scan and fix, but there’s a lot more it can do. You’ll be prompted to switch on automatic maintenance for starters, which claims to automatically clean your PC when ‘clutter’ is detected.

In a subsequent view (see top image), a further 6.3GB is flagged up as possible space that can be freed up. This would put TuneUp way ahead of rivals, but 6GB of this turned out to be the downloads folder which anyone can clear out without needing PC cleaner software and should be one of your first ports of call.

The ‘All functions’ tab on the right is where you’ll find various tools under different categories. Some of these you’ll have already used in the initial scan but tools such as background and startup programs can highlight what might be slowing down your machine. A useful bar indicates the severity of each one and you can choose which to ‘sleep’.

Other tools include a disk doctor and outdated programs, although on my test laptop this didn’t flag much up apart from the fact the drives hadn’t been scanned for errors.

TuneUp offers to uninstall software you don’t need but on my test machine nothing qualified as being ‘unnecessary’. There’s still useful information such as a star rating and when you last used the apps.

Unfortunately, the vast majority of ratings were either 0 or 5 stars and the ‘last used’ column largely said ‘a few seconds ago’ or is blank, so it’s not quite as useful as it first appears. That said, rival PC cleaners weren’t particularly helpful in this area either.

Finally, there’s a rescue center where you can undo recent actions TuneUp has made – such as removing broken shortcuts and registry items – in case something has stopped working.

It’s a shame you have to go for this more expensive option even if you want to use it on a single Mac, for example, as the single device option is limited to Windows.

You can take advantage of a 7-day free trial with no card details needed but the better news is that you can buy AVG TuneUp from Amazon for a fraction of the cost, which makes it cheaper than rivals. For example, the 10-device version was just £15.98 at the time of writing.

AVG TuneUp does its job well and has a simple interface that’s easy to use from the off, living up to the promise of making your machine faster and cleaner.

It also has various tools available along with automatic maintenance. It’s not quite as advanced as some rivals but does everything you need it to. The unnecessary programs section could be better but it’s still better than most rivals.

Really, the main issue is the high cost but that’s avoidable if you buy it from Amazon instead.