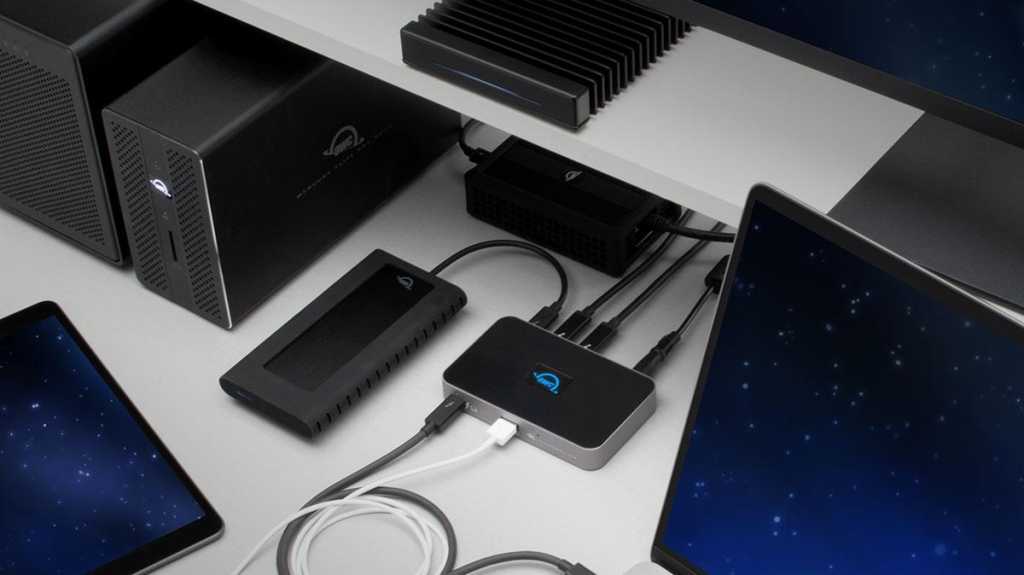 USB-C and Thunderbolt users have been demanding a hub or dock with more T4 ports, and the OWC Thunderbolt Hub delivers with an extra USB-A port thrown in for good measure.

OWC’s Thunderbolt Hub hides its modernity with its modest name. The Thunderbolt in question is the latest Thunderbolt 4, and is also USB4 certified and backwards compatible with USB-C and Thunderbolt 3.

All those connection standards use the same handily reversible port but at different speeds.

While USB-C is usually either 5Gbps or 10Gbps, Thunderbolt 3 and 4 are rated at a speedy 40Gbps. For more on the differences and compatibilities of USB-C and Thunderbolt varieties, read our detailed explainer on  Thunderbolt 4 vs Thunderbolt 3 vs USB-C.

This Thunderbolt 4 hub works with them all and will work to the fastest spec of any device connected to it.

Another benefit of Thunderbolt 4 (TB4) and USB4 is the ability for docks and hubs to boast up to four such ports – twice as many as was possible with Thunderbolt 3 – thanks to the hub using the latest Goshenridge chipset.

And the OWC Thunderbolt Hub has four TB4/USB4 ports – one of which connects to your laptop or tablet.

As a bonus, there’s also an old-school USB-A port, at a racy 10Gbps (and 7.5W power). If you require more USB-A ports, look at the pricier Caldigit Thunderbolt 4 Element Hub that boasts four, also at 10Gbps.

The OWC hub’s power supply is rated at 110W, with 60W reserved to charge the connected computer. Each TB4 port can provide 15W of power. Technically, the hub shares power so will dynamically push the power where it is needed, prioritizing bus-powered drives. So, there could be a scenario where the 60W of power delivery is reduced to keep bus-powered drives going, but with 110W, this should be enough to keep everything going.

Note that Apple has always used the top specs of Thunderbolt 3 but Windows manufacturers didn’t always meet the same standards. Windows users will therefore need to check that their PC is compatible with Thunderbolt 4 or USB4 for it to use a TB4 hub. A Thunderbolt 3 Windows PC might work but is not guaranteed – although it would work as a USB-C hub in Windows.

It’s not a fully fledged docking station but with a few adapters could be used as one. OWC has a Thunderbolt 4 dock in the works, and we’ll review that when it’s shipping.

You can use the Hub to connect storage such as fast SSDs and other accessories, and also up to two 4K displays at 60Hz – or one 5K/6K/8K. Note that newer M1-processor Macs are limited to just one external display. Intel Macs and Windows laptops can connect to two.

Thunderbolt 4 docks are on their way (and in our test lab), but before then take a look at our roundup of the  best USB-C and Thunderbolt docks.

One of the best things about Thunderbolt 4 is its ability to smart daisy chain multiple TB4 devices. Previously, the chain could be broken by removing any but the last device in the chain. T4, on the other hand, creates independent “tree branches” to connect multiple Thunderbolt, USB4, and USB-C bus-powered devices.

Also on the back, there’s a Kensington Nano slot for anti-theft cabling.

A 0.8m Thunderbolt 4 cable is included in the box. 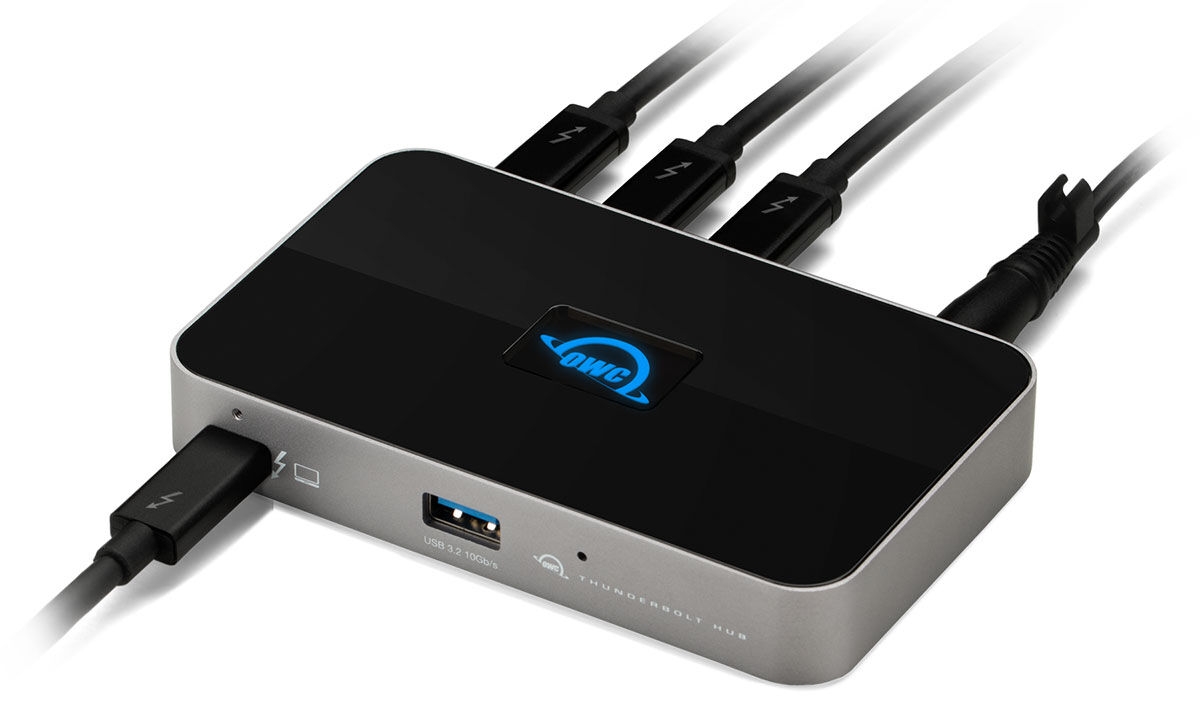 The OWC Thunderbolt Hub is compact despite all its ports and weighs 250g. As such it’s a little heavier than rivals such as the Caldigit Thunderbolt 4 Element Hub and Plugable Thunderbolt 4 and USB 4 Hub.

The power supply will probably rule it out as a portable travel device, although that is smaller and lighter than Caldigit’s mighty 150W power brick.

The power supply port is naturally at the back of the hub, and we would have preferred the laptop TB4 connection to be hidden away there, too. But it’s at the front, which makes it easier to disconnect but a little less neat in appearance on the desk.

The USB-A port is also on the front.

Available only direct from OWC at the moment, the Thunderbolt Hub is reasonably priced at $179 or €157. This is about £139 for UK customers, who must buy from the OWC EU Store but will still get it with a UK plug. However, it’s excluding VAT, so the buying process may be easier from Amazon at what works out as around the same price in total.

This is quite a bit cheaper than Caldigit’s Element Hub, which is $229 or £199 but does boast three more USB-A ports.

USB-C and Thunderbolt users have been demanding a hub or dock with more TB4 ports, and the OWC Thunderbolt Hub delivers with an extra USB-A port thrown in for good measure.

The price is the lowest we’ve seen for one of these latest Thunderbolt 4 or USB4 hubs.

It might not be a full docking station but it is the answer to those praying for a multi-Thunderbolt connector.