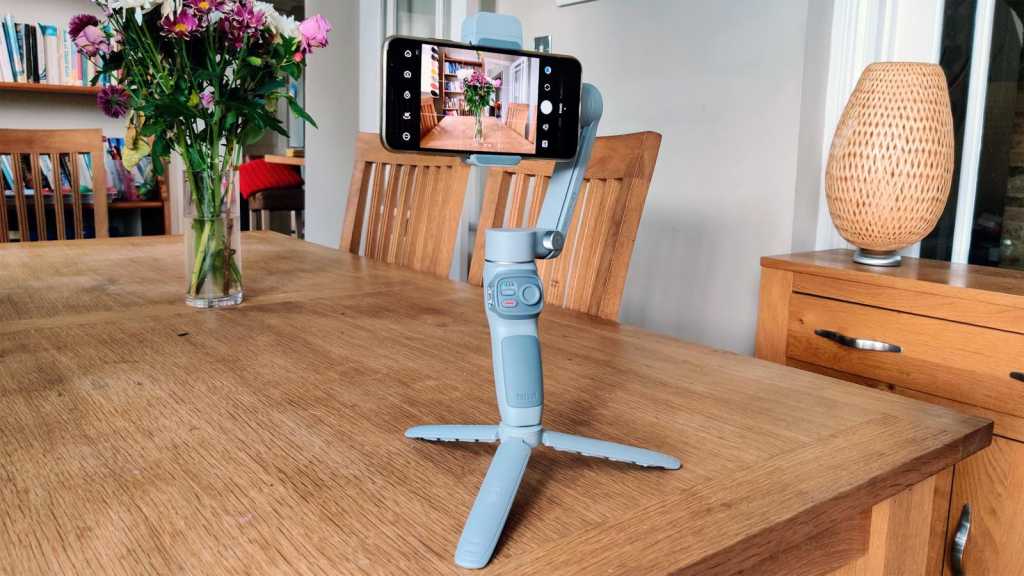 Clearly inspired by DJI’s phone gimbals, the Smooth Q3 does a lot right and includes a useful fill light. The app isn’t perfect, but you don’t have to use it for general shooting.

DJI is perhaps the brand you’d think of first when considering a phone stabiliser, but Zhiyun is well established and offers a good range of its own gimbals, including the amazingly affordable 2-axis Smooth X, which has a built-in selfie stick.

If you want the stability of a three-axis gimbal, then the Smooth Q3 is Zhiyun’s answer. It doesn’t have the telescopic selfie stick, but it does have a built-in fill light, which helps when lighting conditions are less than ideal. Which they usually are if you’re indoors.

At a glance you’d be forgiven for thinking you were looking at an Osmo Mobile: the Q3’s designers have clearly taken a lot of ‘inspiration’ from DJI’s stabilisers, from the shade of grey to the feel of the plastic itself. Even the peel-off stickers are exactly like DJI’s, though there are some differences between the Q3 and the OM3 and OM4.

For one, the Smooth Q3 has an integral phone clamp – not magnetic – and instead of a fold-out arm, it opts for a sliding track that’s secured in place using a thumbscrew.

You might think you can use any position along the track that you fancy, but it has to be fully extended due to the electrical contacts at its end.

It’s relatively compact when collapsed, though you’ll have to buy the Combo kit if you want a carry case to protect it. At 340g, the Smooth Q3 is surprisingly lightweight, but build quality is good, and it feels sturdy.

The built-in battery lasts for 7 hours of normal use, and up to 15 hours  and is recharged via USB-C.

Unlike some of the company’s other gimbals, the Smooth Q3 has a joystick that you can use to pan and tilt your phone’s camera manually. Next to it are Mode and record buttons and, on the opposite side, the power button and a trigger button that has various functions. As we’ve come to expect from most phone gimbals, there’s a zoom slider  on the side but this – as ever – only controls digital zoom: it won’t swap between multiple cameras if your phone has them.

On the top side of the phone clamp is a fill light which can be rotated to face you, or face your subject if you’re filming someone else. It’s a touch-sensitive button: hold it for 1.5s to switch on or off and tap to change the brightness between three levels.

By default the gimbal starts in portrait mode, but you can rotate it to landscape manually or by pressing the tigger three times.

You’ll need to read the manual to understand the different modes and how they work along with the trigger in order to get the kind of motion you want: the PL L and F symbols won’t mean much. POV is the obvious one: it moves the clamp to mirror the handle’s position, so you get ‘point of view’ motion. It’s hard to see the value of this mode as it’s the same effect you’d get if you just held the phone in your hand.

There’s a tripod in the box – which also looks identical to DJI’s – and is invaluable for taking panoramic photos and timelapse videos.

Although you can pair the Q3 via Bluetooth and then use any camera app you like – such as your phone’s stock one – you get access to the full range of features through the ZY Cami app.

Again, there’s much similarity to DJI’s Mimo app here, so you have the option to track and follow subjects with SmartFollow 3.0 (DJI’s is called ActiveTrack 3.0), shoot photographic panoramas in 180 & 240° as well as grid formations for super-wide views.

There’s the Hitchcock-style dolly zoom which automatically applies digital zoom as you move forwards or backwards to keep the subject the same size, as well as timelapse (for use with the tripod) and hyperlapse, which is where you move around with the gimbal and shoot timelapse footage.

If you’ve mounted the Q3 on its tripod, you can use gestures to start and stop recording, as well as activating the follow function.

The issue is that none of these features work quite as well as they do in DJI’s app. I tried multiple times and failed to get a usable dolly zoom shot, and also found that the Bluetooth connection between phone and gimbal would either take a long time or fail completely on occasion. At other times, it would connect automatically and instantly as soon as I tapped the camera icon in the app to go to the shooting mode.

Other problems that cropped up were errors when setting up points between which to move during timelapse shots. The app complained that the “Waypoint distance was too close”. Later on, though, it worked as expected. I suspect it was simply that the Bluetooth connection had dropped, but if that was the case, the error message should have said that.

Tracking wasn’t overly successful either. It worked fine for slower, smaller movements, such as a person talking to camera and moving around a little. But for faster moving subjects such as children and pets, it seemed unable to move quick enough to follow if they left the frame.

Smart templates lets you have some fun with crazy movements during or between shots. Each template has a certain style and instructs you to shoot several short clips. You can choose for each how the gimbal should move, and there are lots of options.

On the app’s home screen you’ll see other people’s video creations, and it’s also where you can use the full and ‘Quick’ video editors. The full one gives you fine control over everything, much like Apple iMovie, while the quick one automatically generates a video from clips you select.

Annoyingly, they both put a ZY Cami watermark in the bottom-left corner of the exported video and you have to pay for the Prime service if you want to export in 4K. If you buy the Combo version, you get a card to activate the Prime service in the box.

There is good news though. For general shooting in the regular video mode, which is the one you’ll use most of the time, the Q3 works really well. It offers the same sort of stabilisation you get from a DJI gimbal which means nice, smooth movement whether you’re standing still or walking with the Q3.

As mentioned, you’ll need to read the manual or watch the tutorial videos in the app to learn how to use it properly and use the correct mode, but once you’ve got that sorted, it will deliver the jerk-free results you’re after.

One tip: pressing the Mode button toggles through the modes and loops back to the start. But press it twice quickly and it will go back to the previous mode.

However, the Osmo Mobile 3 was just £69.99 / $79.99 from Amazon at the time of writing. Although this doesn’t have a fill light, the fact DJI’s app is more polished (as well as the even lower price) makes it an even more attractive option for most people.

For alternatives, see our roundup of the best phone gimbals.

The Smooth Q3 is a very good stabiliser, and could be exactly what you’re after if you just want to add a bit of polish to videos you shoot of yourself, especially because the fill light is a useful addition not found on the DJI OM3 and OM4.

Stabilisation is very decent overall, but you will need to learn how to use the various modes to get the best from it. For those who want to shoot more creatively, the ZY Cami app just isn’t as good as DJI’s, so the Osmo Mobile 3 is a better choice, so long as you don’t need a fill light.