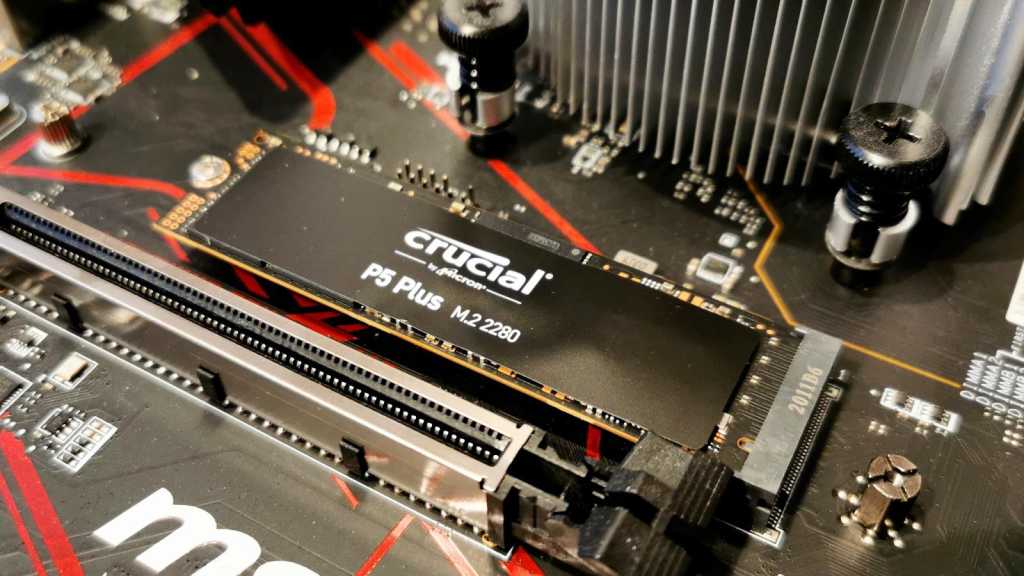 An unambiguous improvement over the original P5. However, its IOPS scores are lacking, and performance suffers when the cache is overrun. Compared with other PCIe 4.0 drives, this one is affordable but not spectacular.

After the disappointing P2 from Crucial, the P5 series reaffirmed our view that Crucial is the brand that can deliver excellent value. The P5 came in capacities up to 2TB, with decent performance and a long lifespan at higher capacities.

When Crucial announced the new P5 Plus, it initially didn’t seem like a dramatic change. Using a new controller to support PCIe 4.0 and changing the NAND specification isn’t a guarantee of a better user experience.

Not to be cynical, but these changes could have been good or bad. Because across almost all storage makers, we’ve seen unfortunate revelations about NVMe drives that have been altered to reduce cost, negatively impacting performance.

Thankfully the Crucial P5 Plus hasn’t been altered in a way that makes it worse than the P5 it replaces, and Crucial did make it a new part number to differentiate it entirely. But I need to say that Crucial reserves the right to change the specification of their products at any time, as most makers do.

My review is based on what the P5 Plus is like today, and hopefully, it will continue to be this specification from now on.

I could make more jokes about how it’s almost impossible to get innovative designs with an edge-connecting stick of electronics of a pre-determined size and shape, but I won’t.

The Crucial P5 Plus is a single-sided 2280 specification M.2 NVMe drive, and it doesn’t come with a heatsink, but I’d recommend you find one for it. 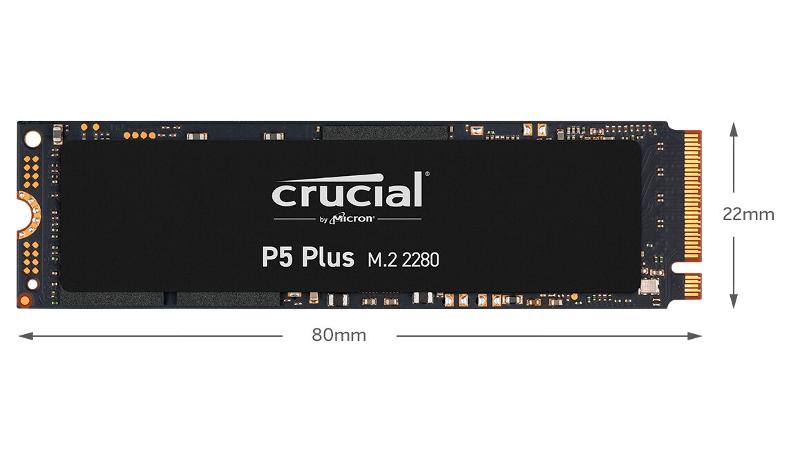 A large label covers the chip mounting side of this module, possibly to hide what silicon is used. This seems a common practice these days, for some of the reasons I’ve already mentioned.

My review P5 Plus was labeled to have a capacity of 1000GB (which technically isn’t 1TB) and revealed it was manufactured in Singapore.

One interesting change that I noticed from the P5 is that while the Crucial packaging is minimalist, included with the drive is a small mounting screw. Given how tiny these screws are and so easy to misplace should you drop one, its inclusion is a very welcome one and I’d like to see more module makers being so thoughtful.

The P5 Plus comes in 500GB, 1TB and 2TB capacities, ditching the smaller 250GB option from the original P5 series.

On the original Crucial P5, the two smaller capacities of 250GB and 500GB both used 64L TLC NAND, where the 1TB and 2TB models used the newer 96L TLC NAND. In the P5 Plus, this has been replaced across the board with Micron 176L TLC NAND, providing greater bandwidths for all models.

And, the existing in-house Crucial NVMe controller has been overhauled to handle this memory and working on a PCIe 4.0 M.2 specification slot. 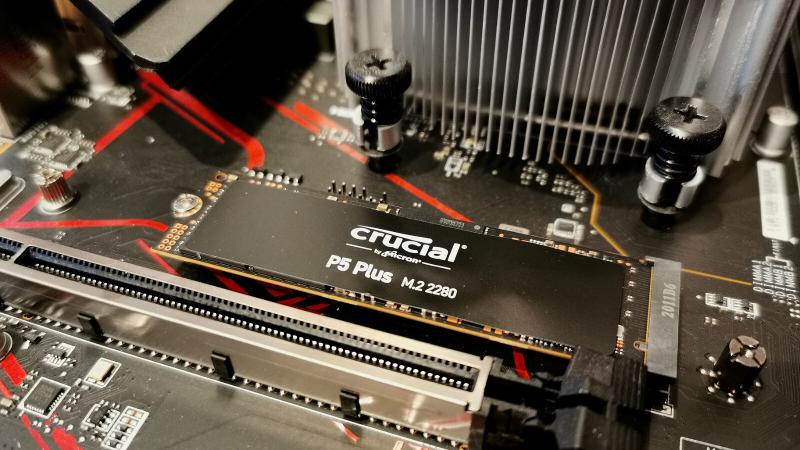 To get the fully upgraded experience requires that spec slot. Although the P5 Plus will operate in a PCIe 3.0 M.2 NVMe slot, it can’t deliver the full advantages of the 176L TLC NAND and enhanced controller in that environment.

If we compare the P5 Plus to the P5 purely based on Crucial quoted numbers, the difference is striking at every capacity, with even the 500GB model seeing significant improvements.

These drives offer a sequential read speed of 6,600MB/s irrespective of capacity, and 5,000MB/w sequential writing on the 1TB and 2TB drives, and 3,600MB/s writes on the 500GB option. That makes the 500GB drive faster at writing than all the P5 capacities, and read speeds are nearly doubled for all sizes.

What hasn’t changed been improved is the endurance, as these drives have the same TBW (Total Bytes Written) as their P5 counterparts, with the 2TB offering 1,200TB of lifespan. That these values haven’t changed isn’t a big problem. The TBW of the P5 wasn’t poor, and with the 250GB no longer an option, the lowest TBW is now 300TB for the 500GB part, which is fine.

The new features added to the P5 over the P2 are all retained, making this drive adhere to TCG Opal 2.0 specification, including IEEE 1667 features and eDrive compliant.

Crucial sent a 1TB drive for testing, which according to the part specification, should perform identically to the 2TB part in the series.

As this is a PCIe 4.0 compliant drive, I used an AMD Threadripper platform to test the P5 Plus since the only motherboard chipset that Intel officially offers PCIe 4.0 is the Z590 and I’m yet to add a Rocket Lake machine to my test environment. 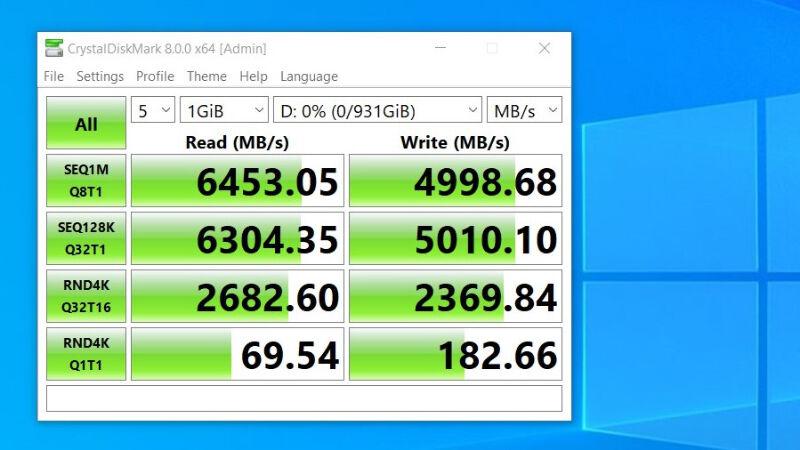 For those curious, the functionality of this slot over the PCIe 3.0 version on most recent motherboards is almost identical, but each lane on PCIe 4.0 is double the bandwidth allowing for up to 8GB/s to travel across that connection in either direction.

Moving this quantity data has a few caveats, not least that the power consumption can be much higher, and this is reflected in the M.2 module becoming hotter in use. If the drive reaches a critical temperature, typically 75-80C, the controller will throttle the bandwidth to avoid heat damaging the module, reducing performance.

In an attempt to avoid thermal throttling skewing our results, an integrated motherboard heatsink was deployed during my tests. And I’d recommend anyone using the P5 Plus to do the same or purchase a third-party cooler.

What’s promised here is 6,000MB/s reads and 5,000MB/s writes, and that’s roughly what most synthetic benchmarks appear to reveal.

But even the highly optimistic CrystalDiskMark 8.0.4 hinted that it isn’t all good news with some decidedly mediocre 4K write scores. Other benchmarks confirmed that this wasn’t something unique to the CrystalDiskMark test.

The IOPS numbers are also well below what we’ve seen from the WD Black SN850, Samsung 980 Pro and Seagate FireCuda 530, and show that while the P5 Plus might be fine for gaming and general application use, it isn’t built to take the relentless abuse of a workstation work profile or the demands of a server. 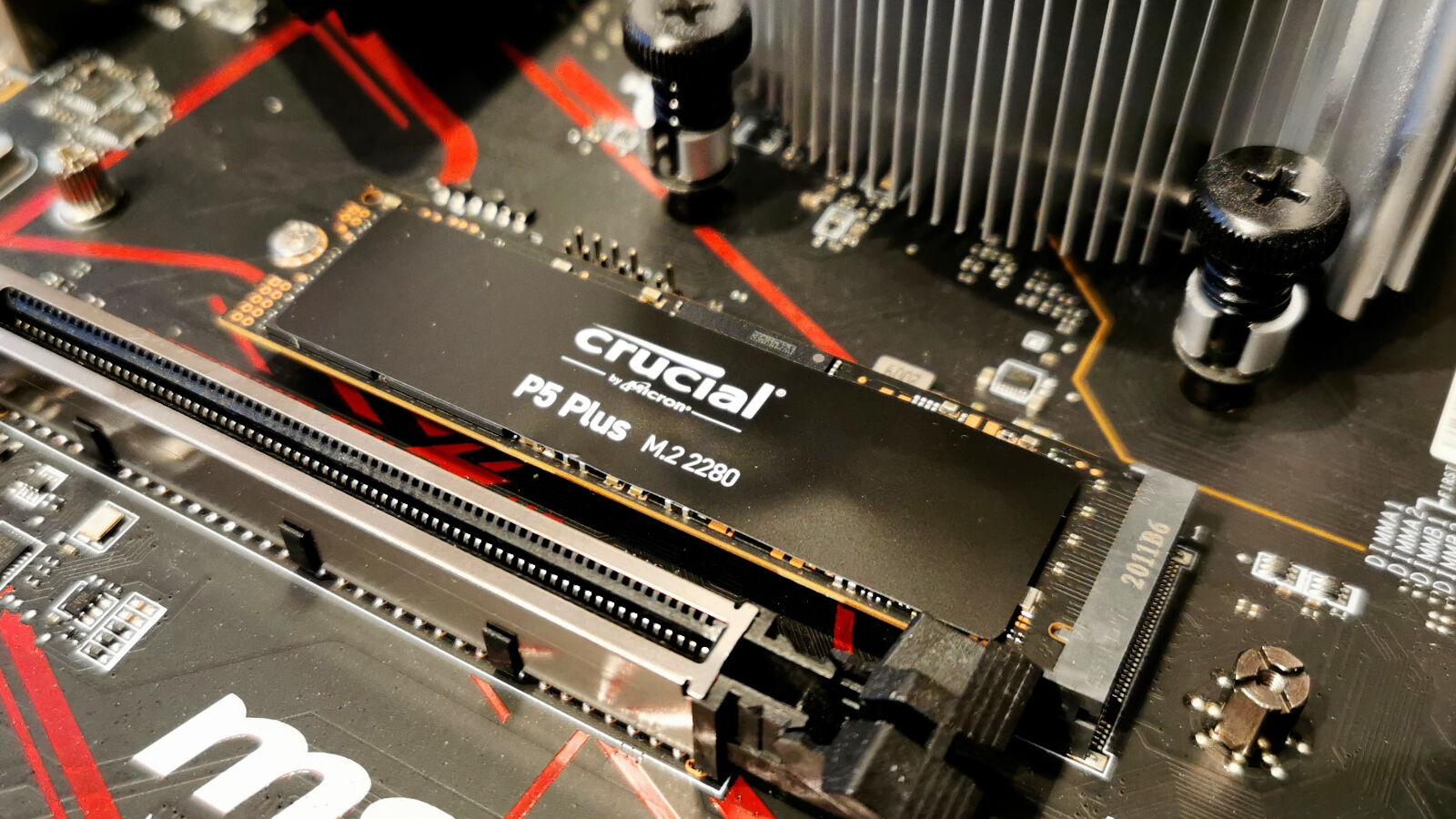 All SSDs tend to mask the actual performance of the NAND by using caching, either DRAM or SLC caches or a combination of these. Remove this cache from the equation, as happens when writing very large files, and the P5 Plus isn’t great when the cache is full.

Writing a file of 100GB, the performance dropped to just 649MB/s, and with a 50GB file, the average performance was around 1,350MB/s. Therefore, the cache becomes exhausted before 50GB, and at that point, the NAND is exposed as not being the quickest. With most PCIe 4.0 drives we’ve tested, these numbers generally hold up over 1,000MB/s when the cache is used up.

Again, how relevant this is to you entirely depends on your use case, as most users won’t be throwing such large files around their system but it’s worth bearing in mind if you do.

You can also buy it from Amazon, Ebuyer and Amazon US.

If you don’t care about speed, the old P5 might be worth considering, but for those with a PCIe 4.0 M.2 slot now, the performance increase of the P5 Plus more than justifies the price difference. That said, with drives like the WD Black SN850 and Samsung 980 Pro being very similarly priced, it might be worth shopping around.

Not sure which SSD to buy? Check our  best SSDs chart with 10 great options and buying advice. 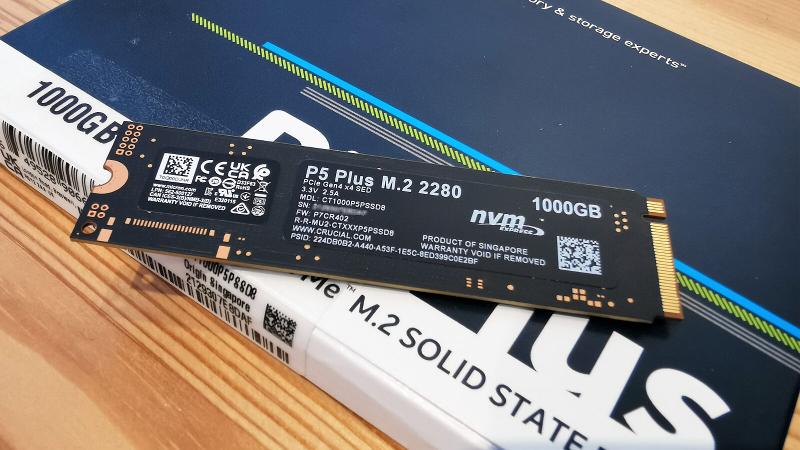 The Crucial P5 was popular because it represented good value, even if it wasn’t the quickest NVMe drive around, and the P5 Plus looks to fill the same niche.

Having seen some remarkably quick drives, like the incredible Seagate FireCuda 530, this was never going to beat that competition. But conversely, the P5 Plus costs around 80% of the FireCuda 530 for the same capacity.

However, it’s much closer in price to the WD SN850 and Samsung 980 Pro, drives that are faster and have much better IOPS numbers if throughput is important. At this pricing, I’d probably take the WD SN850 if given a choice, and that hints that the price of the P5 Plus is a little on the high side for what it offers.

Where this drive could also be better is in respect of large file writes, where the cache becomes saturated and reveals the underlying NAND performance. On other drives using 176-bit NAND or higher densities, we’ve seen 1,350MB/s to 1,500MB/s as the baseline, but the P5 Plus only managed 650MB/s over the long haul.

If you don’t write huge files, you may never encounter this dramatic dropoff in performance, but anyone buying this hardware should be aware of these limitations.

Overall, the Crucial P5 Plus is more than a worthy successor to the P5 and delivers the PCIe 4.0 enhancement that many customers want. But it’s tempting to conclude from its specifications that Crucial has a P6 waiting in the wings to more fully exploit this interface in 2022.