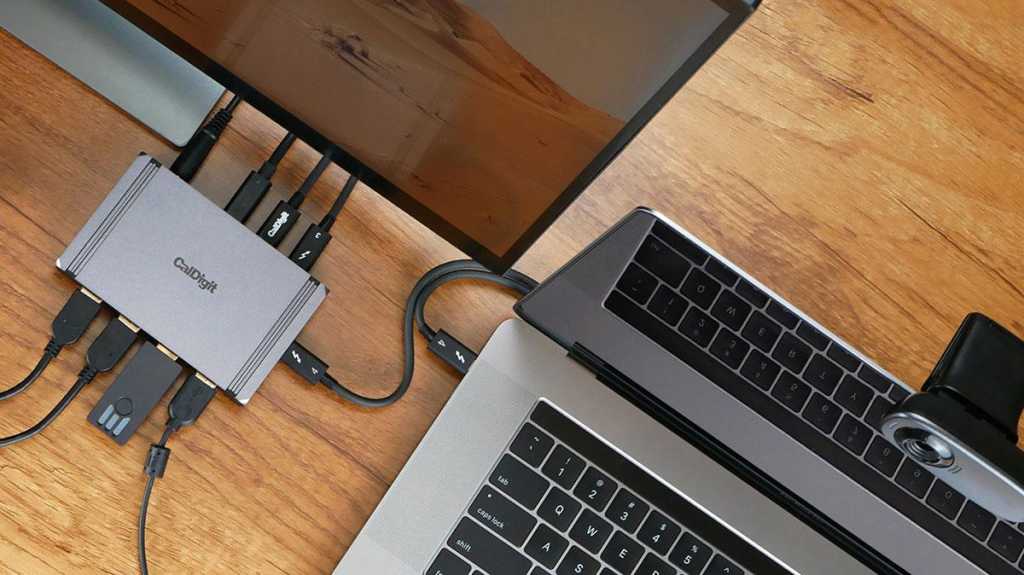 You won’t find any more modern USB ports on a hub than you get with Caldigit’s compact and well-priced Thunderbolt 4 / USB4 Element Hub, and they are all rated at top speeds.

The Caldigit Thunderbolt Element Hub is part of a new breed of USB hubs, and boasts a previously unseen multitude of USB and Thunderbolt ports.

There are many types of hubs available plus multifunction adapters and docks for USB-C and its faster Thunderbolt siblings. But none has possessed more than two Thunderbolt ports, and few more than the same number of USB-C.

Until recently, this has been fine as the number of USB-C/Thunderbolt devices has been low. But now that it’s becoming the de facto connection standard, we need fewer old-school USB-A ports and more modern connections.

The Element Hub ticks all the boxes with four of each.

There are similar hubs just coming on the market – from OWC (read our OWC Thunderbolt Hub review) and Plugable – but none has the four T4/USB4 and four USB-A.

It works with both Thunderbolt 4 and USB4, and is backwards compatible with Thunderbolt 3 and USB-C, so will work with most modern computers.

The 150W power supply should accommodate most of your needs, with up to 60W reserved for powering the laptop or tablet – enough for all but the biggest, meanest laptops.

And because it features so many ports, it’s a serious consideration for desktop users, too. It can even be connected to a fuller-featured Thunderbolt docking station such as Caldigit’s own multi-port TS3 Plus.

Caldigit’s Thunderbolt 4 Element Hub is not a docking station by strict definition – and nor does it claim to be – but it has so many USB ports (both Type A and Type C) that it can certainly be used as a dock if you have the right external device ports or adapters.

If you prefer a fuller docking station, consider the Element Hub’s big brother, the TS4, which has an amazing 18 ports; read our Caldigit Thunderbolt Station 4 (TS4) review.

You can connect to external displays using USB-C (up to two at 60Hz 4K, or one at 8K) if the monitor has such a connection, or use an adapter from USB-C to HDMI or DisplayPort. You can also buy USB-C to Gigabit (and faster) Ethernet adapters if you want wired Internet access, and other dock favourites such as SD or MicroSD card readers, and of course external SSDs. That’s a lot of adapters, though, so consider a full laptop docking station if you need the widest range of ports.

Thunderbolt 4’s improved PCIe bandwidth comes into its own on fast storage, with its 32Gbps two times that found previously.

While it can be used as a dock, most people will prefer a proper dock with all the display and network ports built-in rather than using adapters.

Thunderbolt 4 docks are on their way (and in our test lab), but before then take a look at our roundup of the best USB-C and Thunderbolt docks.

The Element Hub can handle a lot more than a 5Gbps or even 10Gbps USB-C hub, and beats even Thunderbolt 3 (T3) hubs with its ability to smartly daisy-chain Thunderbolt devices. Previously, the potentially long T3 chain could be broken if you removed any but the last one in the chain.

It uses the latest Thunderbolt 4 technology, with a Goshen Ridge chipset that allows for up to four Thunderbolt ports – double what was possible previously with T3.

Apple computers with Thunderbolt 3 have boasted most of Thunderbolt 4’s benefits, but Windows laptops manufacturers picked which speeds and capabilities they wanted from the Thunderbolt 3 playbook, so PC users should check to see if their PC supports two displays and charging through the T3 ports.

That said, Apple’s latest M1-chip based computers support just one external monitor; Intel-based Macs can support two displays through the Element Hub. Check out our workaround solution for adding two screens to an M1 MacBook.

For more on the differences and compatibilities of USB-C and Thunderbolt varieties, read our detailed explainer on Thunderbolt 4 vs Thunderbolt 3 vs USB-C.

While the hub itself is titchy, the power brick is chunky. It means you’re unlikely to use it as a portable hub, but most users will hide the power brick under their desk anyway.

As the Thunderbolt port that connects to your computer is on the side, you can choose to present the TB4/USB4 side or USB-A side on the front or back, depending on your needs. I’ve never liked docks with the laptop port at the front as it’s ugly and inconvenient, and the Element Hub presents a neat solution.

It ships with a 0.8m Thunderbolt 4 cable.

It is more expensive than standard TB3 or USB-C hubs but it packs a lot of the latest and most sophisticated technology and is far more future proof. You simply can’t buy a hub with as many ports in the older T3 market, and T4 is backwards compatible so it’s the obvious choice if you are buying now.

The four Thunderbolt ports are all rated at 40Gbps, and the four USB-C ports are also super-speedy at 10Gbps.

You won’t find any more modern USB ports on a hub than you get with Caldigit’s compact and well-priced Thunderbolt 4 / USB4 Element Hub, and they are all rated at top speeds.

This is going to be a popular hub for computer users with multiple devices, and – although not quite as convenient as a fully loaded dock – it can even be used as a laptop docking station with the right adapters.